Get the daily forecast and severe weather alerts in your inbox!

Become a Member
Read Today's E-edition
Share This
La Niña has arrived in the US and is sticking around. Here is what that means.
0 comments
Share this

Winter weather, ongoing drought conditions and even the remainder of hurricane season will see impacts from a recent cooling of sea surface temperatures in the Pacific.

La Niña conditions -- the opposite phase of El Niño -- have emerged in the tropical Pacific Ocean over the past month, the National Oceanic and Atmospheric Administration's Climate Prediction Center said Thursday.

La Niña typically brings conditions that are wetter and cooler than average to the Pacific Northwest and northern Plains, especially during the winter.

In contrast, La Niña means drier and warmer-than-average conditions usually prevail in the South. This could mean the drought-stricken Southwest will likely stay drier. (La Niña also was present last winter and worsened the drought situation across the West and Southwest.)

The Southeast is also typically drier during a La Niña winter, though before the season starts, it increases the possibility for tropical weather, including hurricanes.

La Niña will persist through winter in the US

La Niña -- translated from Spanish as "little girl"-- is a natural ocean-atmospheric phenomenon marked by cooler-than-average sea surface temperatures across the central and eastern Pacific Ocean near the equator that consequently impact weather across the world.

"La Niña is anticipated to affect temperature and precipitation across the United States during the upcoming months," the center said as it issued a La Niña advisory Thursday, predicting conditions are present and expected to remain.

The advisory replaces the La Niña Watch, which indicated favorable conditions for development that had been in place since July.

NOAA will release its winter outlook October 21, and the presence of La Niña is expected to weigh heavily in the forecast for the season. The prediction center put the odds near 90% that La Niña would be in place through the winter of 2021-2022.

Both La Niña and El Niño occur every three to five years on average, according to NOAA.

La Niña's impact on the rest of hurricane season

During La Niña, weaker winds between the ocean surface and upper levels of the atmosphere impact global jet streams and can influence the track and severity of winter storms and hurricanes during warmer months.

"La Nina is associated with reductions in vertical wind shear in the Caribbean and tropical Atlantic," said Phil Klotzbach, a research scientist at Colorado State University. "Too much shear is typically what ends the Atlantic hurricane season, so La Niña can extend the active part of the season.

"Last year is a great example of this, as we had six hurricanes and five major hurricanes in October-November," he said. "While we certainly don't expect to see that much activity the remainder of this season, the development of La Niña does leave the window open for more late-season storm activity this year."

At the start of this hurricane season, seasonal forecasters said to look out for La Niña forming in October because it could make the second half of the season active.

Currently, conditions across most of the Atlantic are not conducive for hurricane formation. But this could change in the coming weeks.

La Niña and the climate crisis

While El Niño and La Niña events are regular aspects of global weather patterns, increased global temperatures may temper or change their effects.

La Niña tends to pull down global temperatures, but in recent years, the planet has warmed so fast, it's like hitting a small speed bump at 80 mph -- it barely even registers.

It's likely too early to know how climate change will affect those patterns; research is beginning to show how a warming climate may amplify the effects of El Niño and La Niña. Climate change could increase the severity of weather events stemming from El Niño and La Niña patterns, according to a 2018 study on atmospheric conditions that ran simulations of climate conditions.

Top spots on the warmest-years list used to be reserved for the strong El Niño years, but human influences have long since overwhelmed the planet's natural temperature regulators. For instance, La Niña was present during parts of 2020, but the year still tied with 2016 (an El Niño year) as the hottest on record for the planet.

These are the 20 most humid cities in America

Most humid cities in America

Get the daily forecast and severe weather alerts in your inbox!

Blizzard warning in Hawaii? Meanwhile, it hasn't snowed in Denver yet

Hawaii has flood watches and blizzard warnings in effect while Denver, Colo., is still waiting for its first snowfall of the season, breaking a record.

Waterloo's evening forecast: Partly cloudy and windy. Low around 20F. Winds WNW at 20 to 30 mph. Higher wind gusts possible. It might be a goo…

For the drive home in Waterloo: Partly cloudy. Low around 35F. Winds ESE at 5 to 10 mph. Looking ahead, Waterloo temperatures will reach the 5…

For the drive home in Waterloo: Cloudy. Low near 30F. Winds SE at 15 to 25 mph. Temperatures in Waterloo will be cool tomorrow. It looks like …

It might be a good day to stay cozy at home, with temperatures barely hitting 31 though it will feel even colder at 29. 16 degrees is today's …

Waterloo residents should expect temperatures in the 40s. It looks to reach a chilly 46 degrees. Expect a drastic drop in temperatures though,…

For the drive home in Waterloo: Partly cloudy during the evening followed by cloudy skies overnight. A few flurries or snow showers possible. …

Waterloo residents should expect temperatures in the 40s. It looks to reach a cold 43 degrees. 30 degrees is today's low. We'll see sunshine t…

Waterloo folks should see highs in the 50's today. It looks to reach a cool 54 degrees. A 35-degree low is forecasted. Expect clear skies toda… 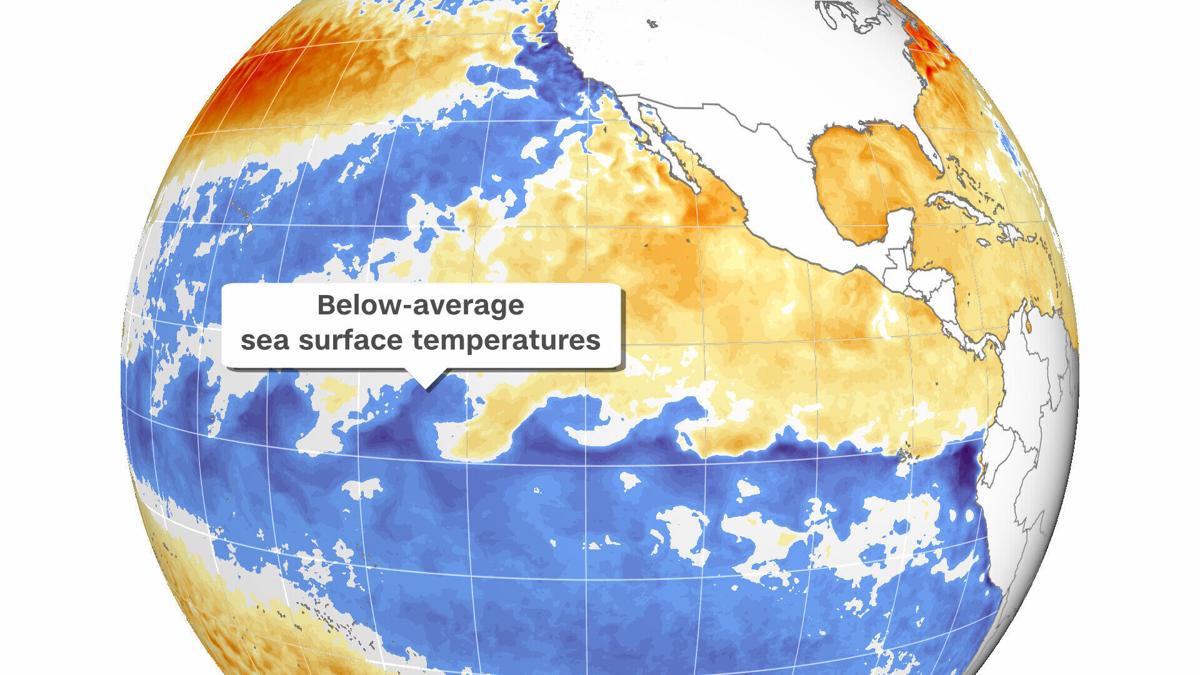 La Niña conditions -- the opposite phase of El Niño -- have emerged in the tropical Pacific Ocean over the past month. 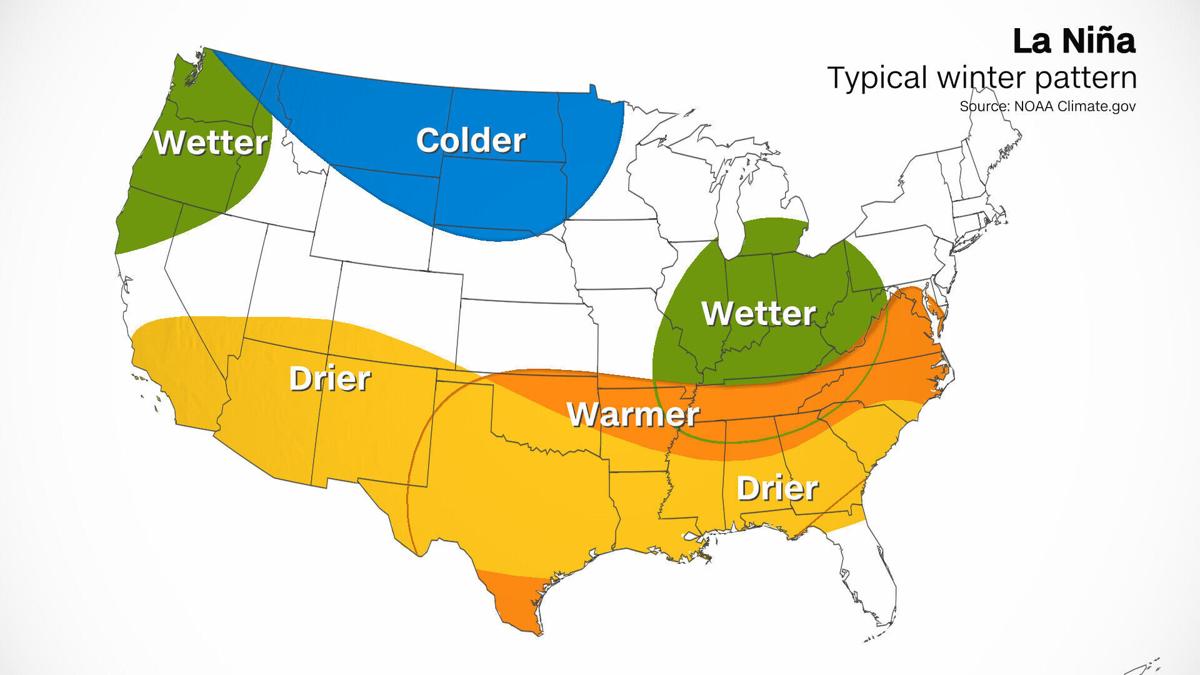 La Niña typically brings conditions that are wetter and cooler than average to the Pacific Northwest and northern Plains, especially during the winter.