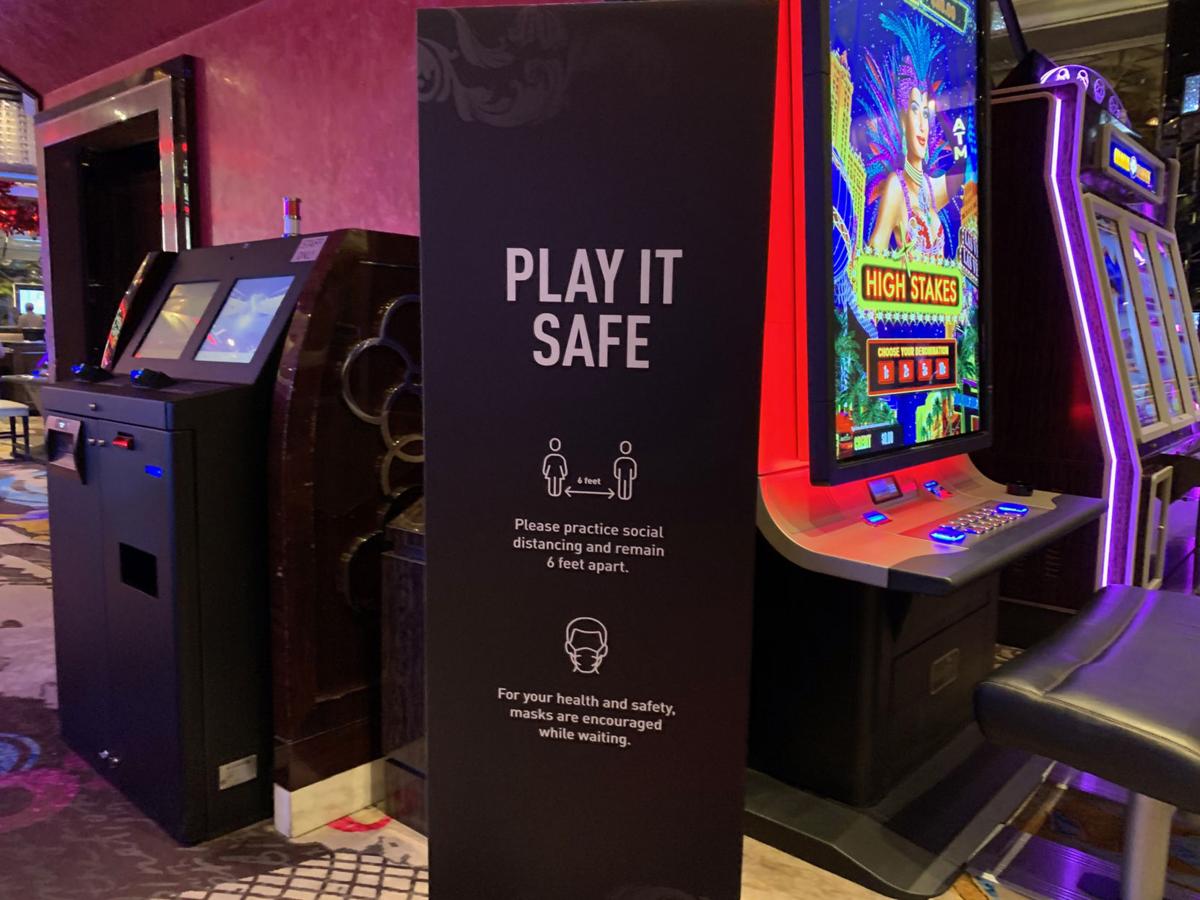 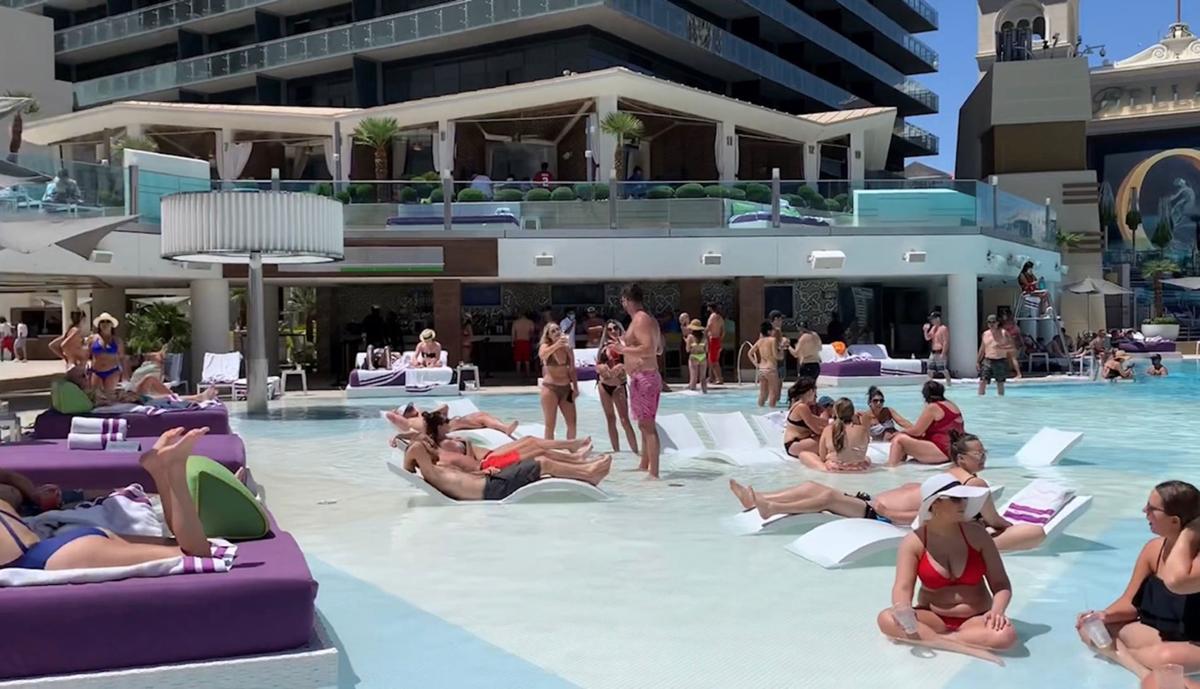 As I walked up to a roulette table at the Cosmopolitan on Friday night, I couldn't help but hear the young woman ask her friend about my facial covering. I knew she was talking about me because as I scanned the casino floor, I was the only nonemployee wearing a mask.

Welcome to the new Las Vegas, where the coronavirus pandemic is in the mental rear-view mirror of many visitors, and mask shaming is in vogue for some tourists trying to return to normalcy.

Several hotels and casinos on the Las Vegas Strip opened for the first-time last Thursday since being closed in mid-March due to the COVID-19 pandemic. Depending on where you went, the new normal may not have looked that much different than the old normal.

MGM Resorts opened the Bellagio, MGM Grand and New York-New York on Thursday. When the doors at the Bellagio opened at 10 a.m., Bill Hornbuckle, MGM Resorts' acting chief executive and president, was there along with hotel staff and executives to applaud their first customers in nearly three months as the fountains outside played "Viva Las Vegas."

Plexiglas safety shields separated the players and dealers at gaming tables and were placed between every two seats at the bars. There were hand-washing stations on the casino floor and several kiosks with complimentary masks, gloves and hand sanitizer. All employees, including dealers and bartenders, wore masks, while signs on the casino floor "strongly encouraged" guests to wear them. It was hard to forget the pandemic at the Bellagio.

The Cosmopolitan, however, appeared as if it was six months ago when there was no pandemic and social distancing had yet to enter our lexicon. There were signs posted in the casino encouraging guests to wear masks, but they were received as warmly as someone telling you "try not to have too much fun" before your Las Vegas trip.

I posted a video of my walk through the casino floor on Twitter, where it was viewed more than 16 million times. There wasn't anything extraordinary about it except that it felt ordinary, which perhaps passes for extraordinary during this time.

Nobody seemed to be keeping a 6-foot distance, few outside of employees were wearing masks, and there were no dividers at the gaming tables and bars, which were packed.

The issue in Nevada is that facial coverings are not required for hotel and casino guests, only for employees. Many of those who descended upon Las Vegas to be among the first to check into a hotel, put $20 on black and double down on 11, aren't going to wear a mask because they're not concerned about COVID-19.

If they cared about it in March, they seemed to have lost interest at some point and are now ready to return to their old way of life regardless of the trajectory of the curve. It's hard to imagine that anyone genuinely worried about the pandemic would wait for the casino doors to open at 10 a.m. last Thursday to rush to the blackjack table.

In a city built on luxury and indulgence, it was the simple things on this first trip to Las Vegas in three months that prompted me and many others to text pictures to friends and family back home.

I went to the gym. I got a haircut. I laid out by the pool. I ate at a nice restaurant. I placed a bet on a live boxing match.

The photos and videos of these mundane activities, which would have been afterthoughts three months ago, were met by responses ranging from "I'm jealous!" to "Are you crazy?!"

That divide during this pandemic is one reason Las Vegas isn't fully open. Hotels are just dipping their toes into their pools, which were open and surprisingly full over the weekend. Day beds and cabanas at the Cosmopolitan were sold out.

Hotels can't exceed 50% capacity, many stores and restaurants inside are either closed or open only during select days and times. Nightclubs and buffets, Vegas staples, are shut for the foreseeable future. Some casino floors may have looked packed over the weekend, but the Strip is still very a much a ghost town with no traffic.

The expectation is that Las Vegas will be fully back by July 4, a Saturday. Most of the aforementioned hotels announced they would reopen by that weekend.

As I said goodbye to a friend, who is a bartender at one of the hotels that opened last week, she discreetly looked to her left and right before briefly removing her mask to blow me a kiss.

"Hopefully the next time I see you we don't have to wear these stupid masks," she said. "I hate it."

Need a passport? Is it life or death? About 1.2 million people are ahead of you

The U.S. State Department, which largely shut down its passport processing in March, says it is chipping away at a backlog of applications that have accumulated since then. But officials aren't giving any time estimates.

Why won’t the FAA require masks?

I was once on a flight that was delayed several hours because of a missing beverage cart. The flight crew explained that this happened not because the passengers might riot…

While isolating during a pandemic isn’t the best way to work on new music, singer-songwriter Kiiara is making the best out of an unfortunate situation. Based out of Chicago, the 25-year-old musician is celebrating the release of her latest single, “I Still Do,” which tackles how inexplicable your feelings about love can be. Her previous releases include “Open My Mouth” and her Linkin Park collaboration, “Heavy.” Fans may stay in touch with her on Instagram and Twitter (@kiiara), Facebook (@kiiaraofficial) and on her website (kiiara.com).

Family groups flying together should not have to pay extra seat-selection fees to be assured of sitting together. That relatively simple and obvious proposition has nevertheless been ignored by airlines and the Department of Transportation (DoT), so travelers have turned to Congress for relief. The new "Fly Together Act" proposal in the Senate parallels an earlier companion bill in the House. Both address an obvious consumer pain point.

Three Hawaiian Islands are considering creating "resort bubbles" so that visitors can quarantine with a vacationlike experience at hotel properties. Officials on Maui, Kauai and the Big Island are thinking about allowing tourists to stay at properties on the islands with the ability to at least go outside for fresh air. The idea would be to geo-fence guests to the confines of the resort. The ...

How To Road Trip Safely During Social Distancing

How To Road Trip Safely During Social Distancing