WATERLOO — In the 75 years since Waterloo’s five Sullivan brothers died during World War II, honors, recognition and memorials to their sacrifice have been numerous and widespread.

Following is a non-comprehensive list of just some of the recognition the brothers have brought upon themselves, their family, community and state.

Each of the five Sullivan brothers were awarded the Purple Heart, a medal given military personnel killed or wounded in combat, along with other theater and service decorations. The Juneau and the Sullivans earned four battle stars for engagements in which they were involved.

Two Navy ships were named USS The Sullivans — a World War II era destroyer, DD-537, now decommissioned and docked at a Buffalo, N.Y., military park, and the present USS The Sullivans DDG-68, an Arleigh Burke-Class Aegis guided missile destroyer, still on active duty. The brothers’ mother, Alleta Sullivan, christened and sponsored the first ship; their granddaughter and grandniece, Kelly Sullivan, serves in the same capacity for the second vessel. Each ship is emblazoned with an Irish shamrock, a nod to the brothers’ heritage. A silver table service, paid for with funds raised by residents of Waterloo, including students from St. Mary’s Catholic School which the Sullivan brothers attended, was donated to the second USS The Sullivans during its 1997 commissioning in New York.

Sullivan Brothers Memorial Park, containing a five-sided memorial marker adorned with an Irish shamrock for the brothers and a mast-shaped flagpole, is located at East Fourth and Adams streets and also takes in the site of the Sullivan family home, identified by a large stone and historic marker. The part was dedicated in 1964, replacing the previously named park at Maxwell and Stratford avenues, now Galloway Park.

Five Sullivan Brothers Convention Center, soon to be Waterloo Convention Center at Sullivan Brothers Plaza and originally ConWay Civic Center, was renamed for the brothers in 1988 largely as a result of efforts by Waterloo attorney and Navy veteran Ed Gallagher Jr. and retired U.S. Navy Rear Adm. James D. Ramage, a Waterloo native of the Highland area in east Waterloo and former Courier paperboy who commanded the dive bomber squadron of the USS Enterprise during World War II. The entire block, including the convention center, is to be renamed Sullivan Brothers Plaza as part of a renovation of the convention center and adjacent hotel.

The local organization of the Ancient Order of Hibernians, an Irish heritage group, is known as the Sullivan Brothers Division I chapter. In 2012, the Sullivan brothers were inducted into the organization’s Irish American Hall of Fame, joining other individuals including composer George M. Cohan, former U.S. Speaker of the House Thomas P. “Tip” O’Neill and President John F. Kennedy.

The Sullivan Brothers Iowa Veterans Museum, an addition to the Grout Museum District, opened in November 2008 after more than three years of planning and fundraising. The $11.5 million museum honors all Iowa veterans and is a repository for hundreds of their video-recorded oral histories.

The Sullivan Brothers Outstanding Military Family award is given annually by the Grout Museum District to families who have had multiple members in the military who also have been active in community service.

The Sullivan Brothers Award of Valor for police officers and firefighters is offered by the Iowa Department of Public Safety.

The Sullivan brothers in part inspired the 1998 movie “Saving Private Ryan” and Steven Spielberg paid tribute to them in accepting a Oscar for Best Director for that film. In one scene of the movie, U.S. Army Chief of Staff George C. Marshall, played by actor Harve Presnell, is informed by officers that the fictitious Ryan brothers of Paton, Iowa, were divided up into different units “after the Sullivan brothers went down on the Juneau.”

In a May 21, 1987, memorial service for 37 sailors killed aboard the frigate USS Stark when an Iraqi jet fired missiles at it in the Persian Gulf during the Iran-Iraq war, President Ronald Reagan said: “And none of us who were alive then can forget the special burden of grief borne by Mr. and Mrs. Thomas Sullivan of Waterloo, Iowa. They would remember forever the autumn afternoon they learned that their sons — George, Francis, Joseph, Madison, and Albert — the Five Sullivans as we knew them then, would not be coming home.”

In 2001, five memorial markers for each of the Sullivan brothers were placed at Arlington National Cemetery. It was the result of efforts by U.S. Army veteran Harry Burtner of Maumers, N.C., who was inspired to petition Arlington’s superintendent to erect the markers after seeing a documentary on the brothers which was part of the “Histories Mysteries” television series on The History Channel.

The brothers’ surviving sister, Genevieve Sullivan Davidson, who died in 1975, had her wartime service in the Navy WAVES recorded at the Women in Service to America memorial, dedicated in 1997 and located at Arlington’s Memorial Gate, not far from the grave of President Kennedy. Many other local women’s service is recorded there. 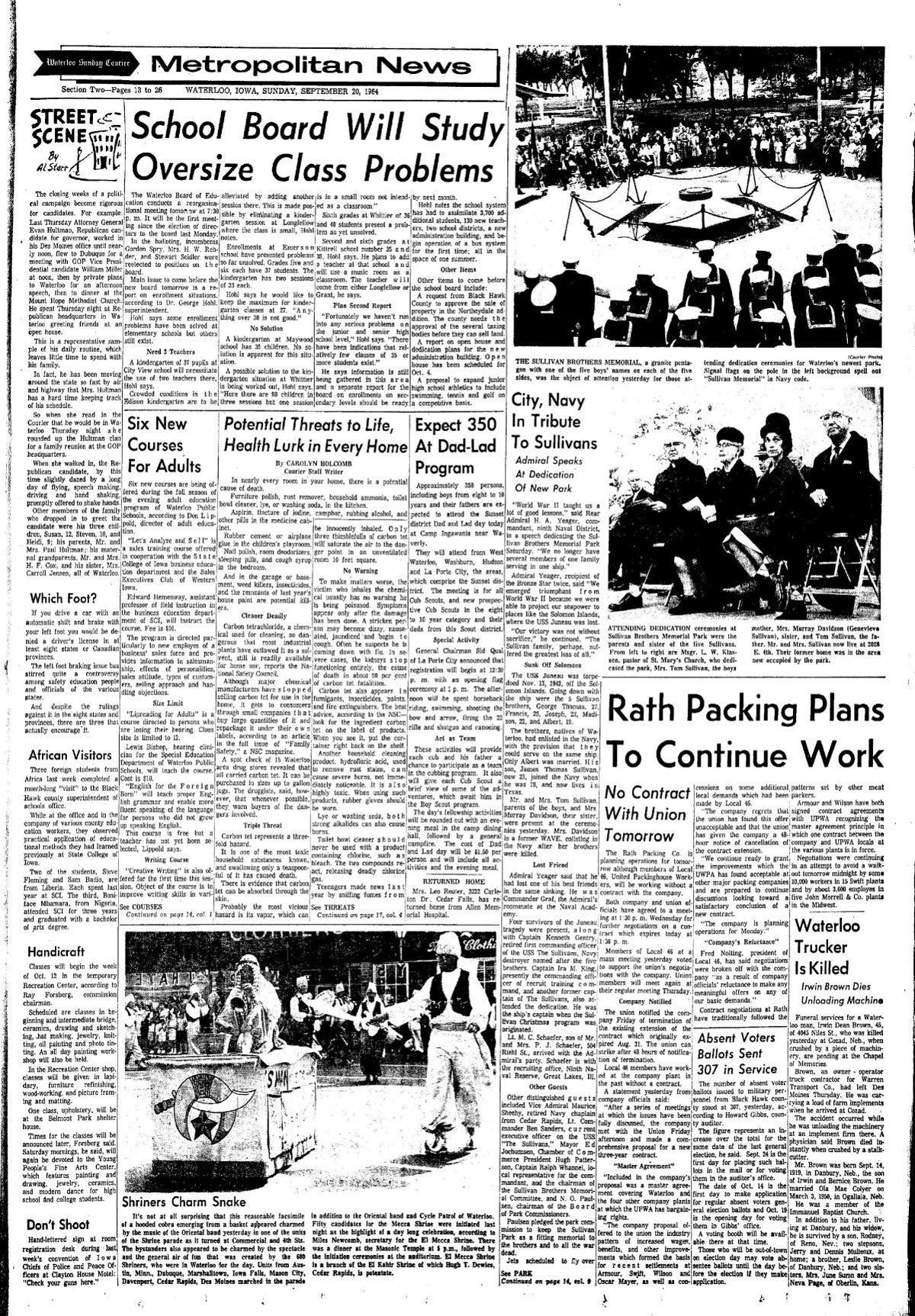 A Sullivan Brothers memorial statue with a 2 1/2-ton base engraved with the brothers’ names, is topped by an Italian marble Roman Catholic statue of the Blessed Virgin Mary, Queen of Peace. It was first erected on the grounds of St. Mary’s Catholic Church and school in 1956. According to an April 15, 1956, Courier article, the statue was imported from Italy and is made of rare Carrara marble.

It was purchased “with funds contributed by Sullivans throughout the nation” to honor the five brothers’ memory. The fund drive was started by Sullivans in Boston and spread from there. Contributions were solicited from school children around the country. 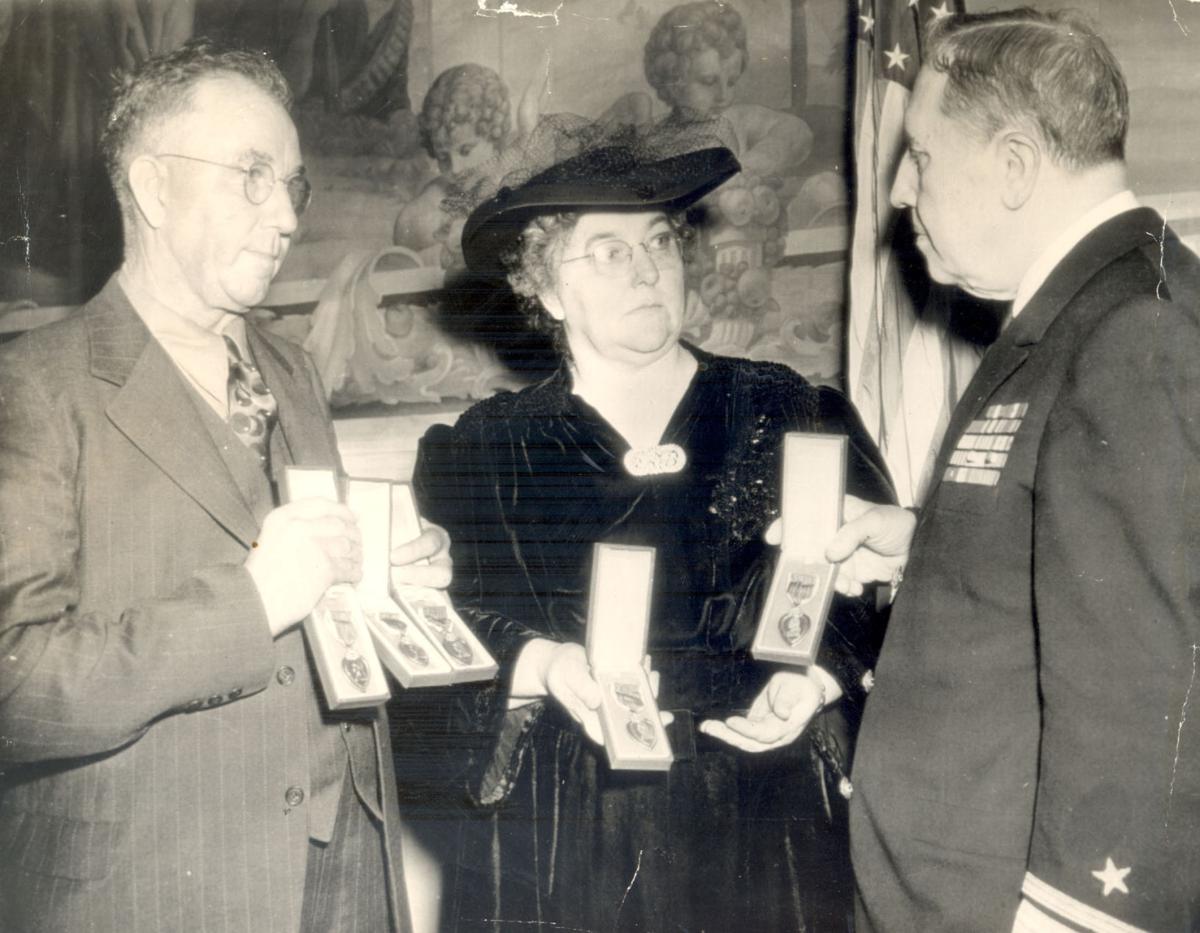 Thomas and Alleta Sullivan are presented with Purple Hearts for each of their five perished sons. 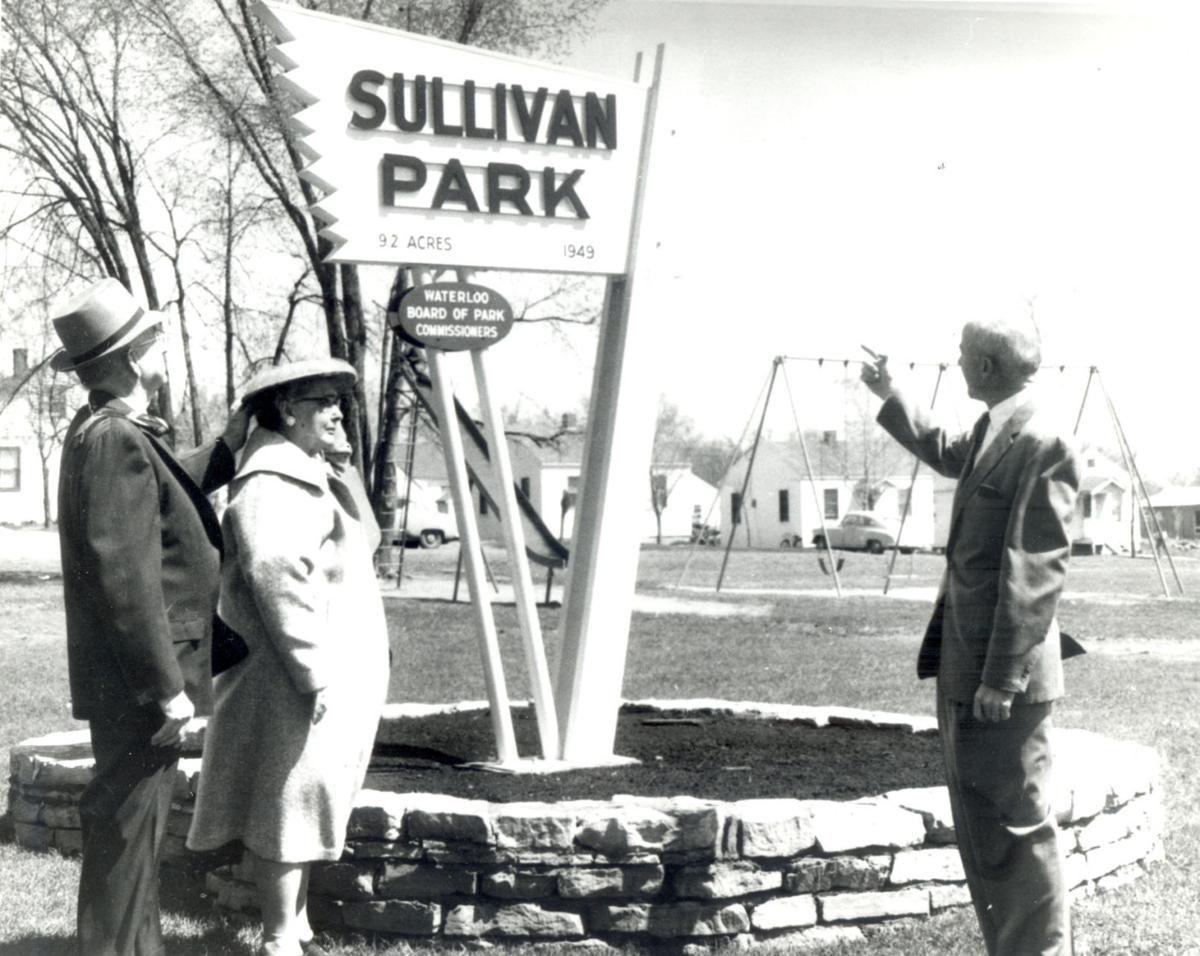 In this May 1, 1959, Courier photo, the park at the corner of Maxwell Street and Stratford Avenue was dedicated to and named after the Sullivan Brothers. In 1963, an area on East Fourth Street closer to the Sullivan home and on a busier thoroughfare would become the new Sullivan Park. 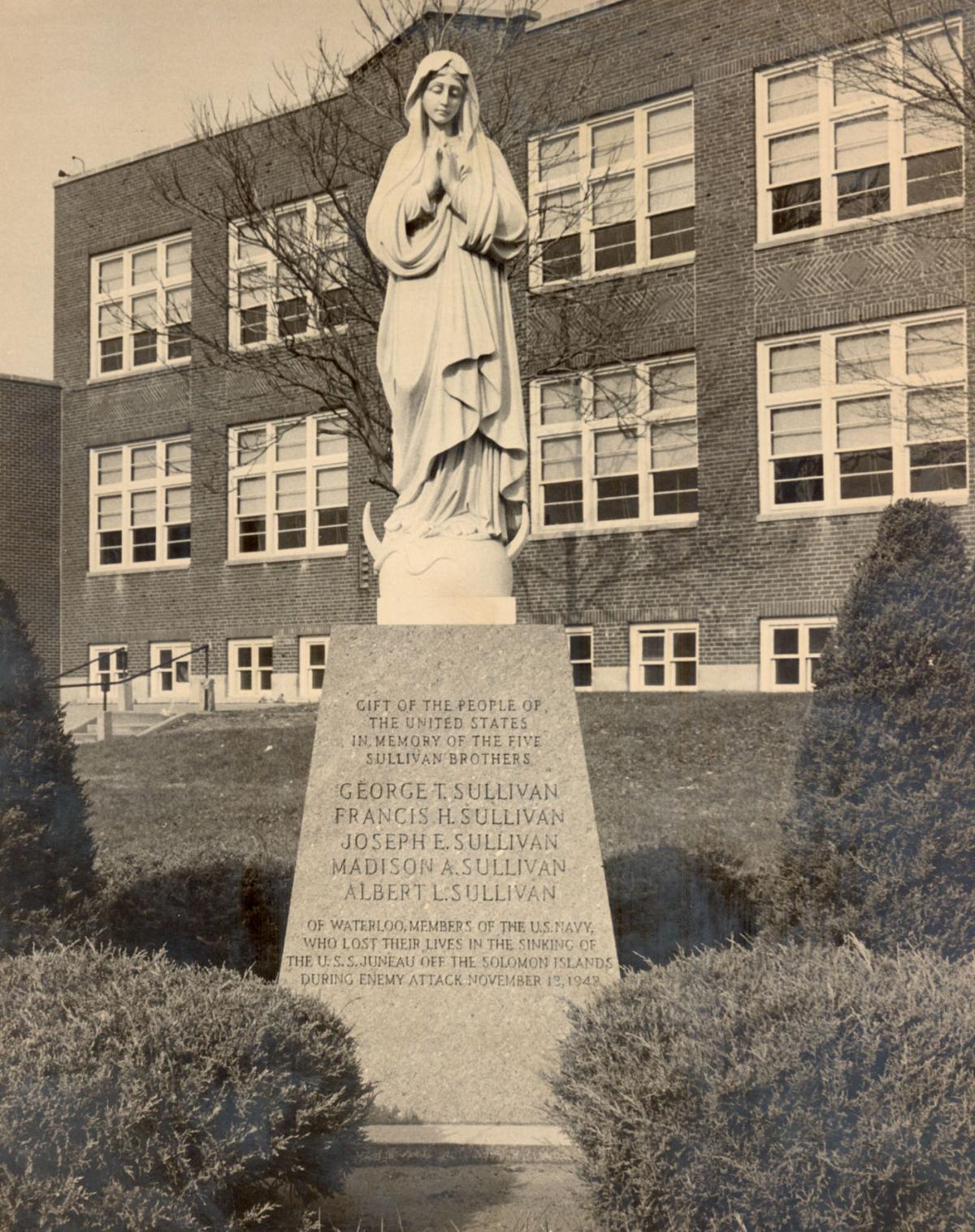 This memorial to the Sullivan brothers was installed at St. Mary’s Catholic Church and School in Waterloo. It now is displayed at Columbus High School. 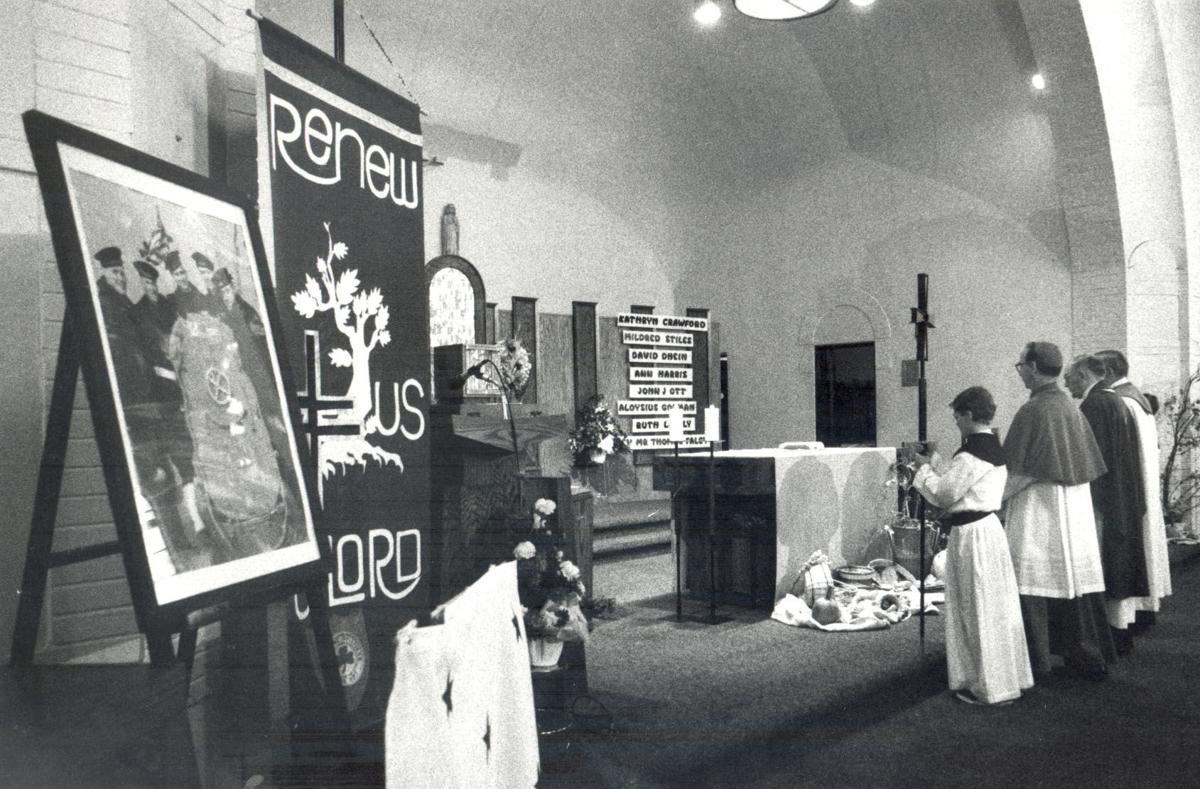 A Roman Catholic Mass was conducted at St. Mary’s Catholic Church, the home parish of Waterloo’s five Sullivan brothers killed during World War II, in 1988 as part of the activities concurrent with the renaming of Waterloo’s convention center for the brothers that year. 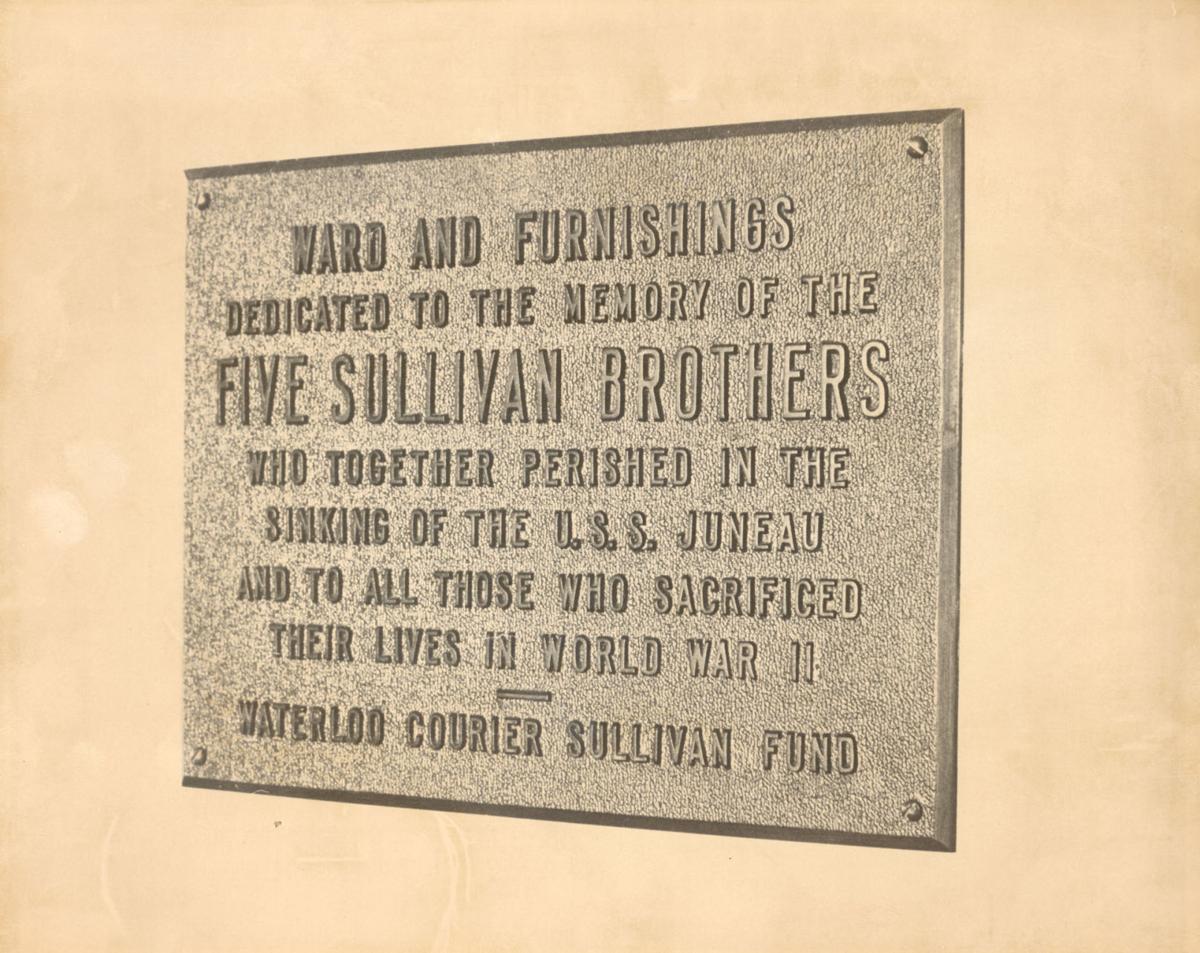 This tribute to the five Sullivan brothers was installed at the former Schoitz Memorial Hospital on Kimball and Ridgeway avenues.