Gable says Medal of Freedom, 'Good for Waterloo, good for the state'
0 comments
Share this
{{featured_button_text}}
1 of 3 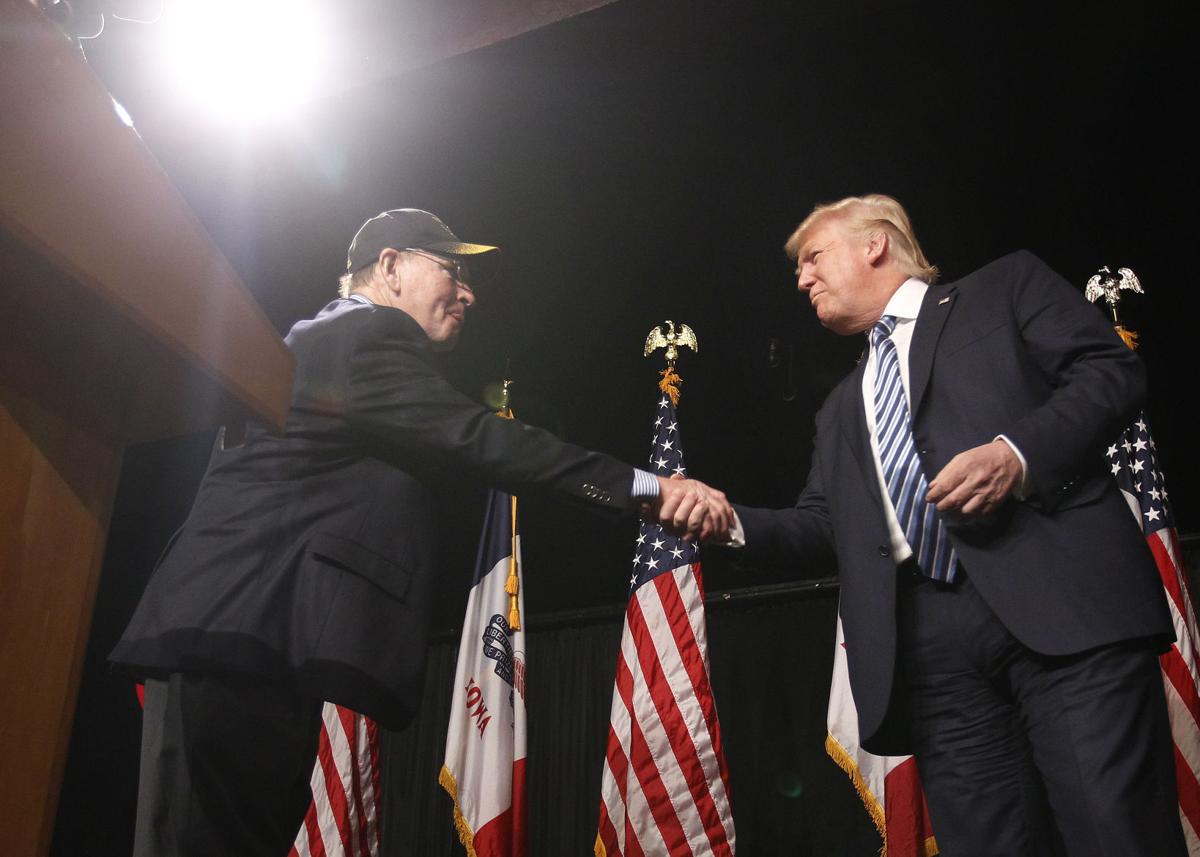 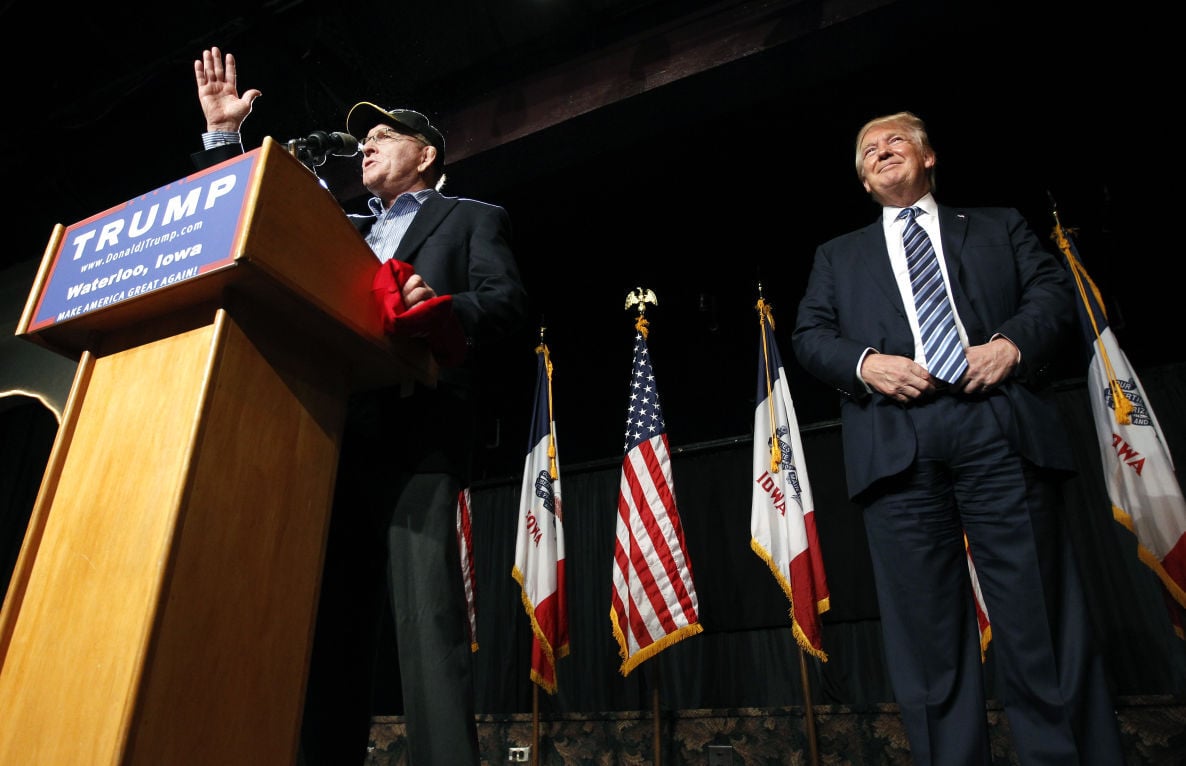 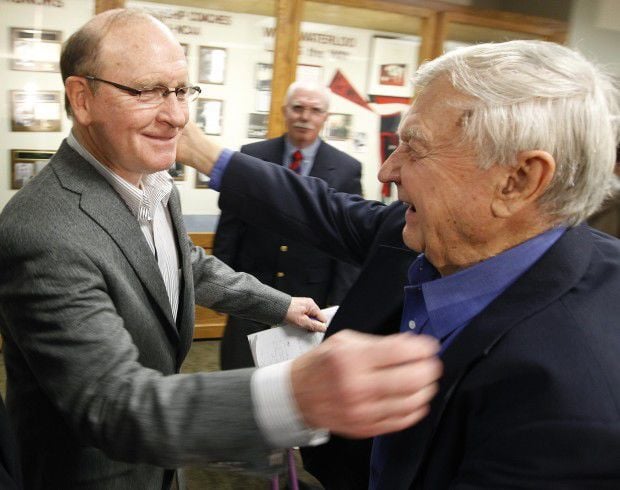 WASHINGTON – Dan Gable was at a granddaughter’s cross country meet Tuesday when his phone rang.

When he checked it later, it turned out the White House was trying to reach him.

Gable said he and Trump spoke for roughly 15 minutes in a phone conversation that included U.S. Rep. Jim Jordan, R-Ohio, and U.S. Rep. Dave Loebsack, D-Iowa. Jordan, himself a former college wrestling coach, was one of the key figures behind the letter to the president in August requesting Gable receive the honor, saying he “defined greatness as an athlete and a coach.”

“He laughed a lot,” Gable said of the president. “His son, Donald Trump Jr., was a wrestler and has a passion for wrestling.”

Gable was aware he had been nominated for the award, but didn’t give it much thought until he received a letter from the president Tuesday in addition to the phone calls.

“I’m not a guy who showed a lot of outward emotion. I might have given a little jump when I won the gold medal, but there is a lot of internal emotion with this award,” Gable said. “Somebody said wouldn’t it have been great if his parents (Mack and Katie) and his sister (Diane) were still alive to see him receive the award. And I told them they are here and that they know.”

Gable is unsure when he will receive the award as the White House wants his family to share in the moment. Gable and his wife, Kathy, have four daughters — Jenni Mitchell (Brian), Annie Gavin (Mike), Molly Olszta (Danny) and Mackenzie McCord (Justin) and 13 grandchildren.

Gable, 71, is a beloved figure in Iowa. After racking up two NCAA national championships at Iowa State University, Gable went on to win the 1971 Pan American Games, two world championships and the gold medal at the 1972 Summer Olympics in Munich.

Following the string of victories, Gable joined the coaching staff at the University of Iowa, where he posted a record 355 wins — including 15 national team titles — from 1976 to 1997. He served as the head Olympic coach for U.S. wrestlers at the 1980, 1984 and 2000 competitions, leading his athletes to seven gold medals.

Raised in Waterloo and now living in Iowa City, Gable has authored multiple books drawing on his wrestling expertise as well as his personal life story, which was shaped by the murder of his sister as a teenager.

Gable is the first wrestler to receive the honor. Other coaches and athletes of prominence who earned the award include Jesse Owens, Babe Ruth, Paul “Bear” Bryant, Pat Summit and John Wooden.

“Gable has left me a lifetime philosophy that I do not deviate from,” Iowa wrestling coach Tom Brands said in a statement released by the school. “My brother and I are keen on the lessons we learned from him. That will never change. This award is awesome because it puts Dan Gable in context and brings him back front and center.

“Gable was a winner. He did not lose. He won nine straight national championships, as many as John Wooden. The stratosphere that those two guys co-exist in is unheard of, and I am reminded every day when I see his statue. Those memories are strong with me. The bedrock of Hawkeye wrestling will always be Dan Gable, and especially when Tom and Terry Brands are running the program, because we cut our teeth right here.”

“Dan Gable demonstrates that through hard work and determination you can accomplish great things. While he’s famous for winning awards both as a wrestler and as a wrestling coach, he’s also well-known and respected for his focus on family and giving back to his community and state. Congratulations on receiving this prestigious and well-deserved award,” Grassley said.

“Dan Gable is an iconic wrestler from my alma mater, Iowa State, a successful Hawkeye wrestling coach, and a USA Wrestling, National Wresting, and U.S. Olympic Hall of Fame inductee. For all of this, and much more, Mr. Gable is so deserving of the Presidential Medal of Freedom. Congratulations to Dan on receiving the highest honor for any civilian; keep making Iowa proud!” Ernst said. 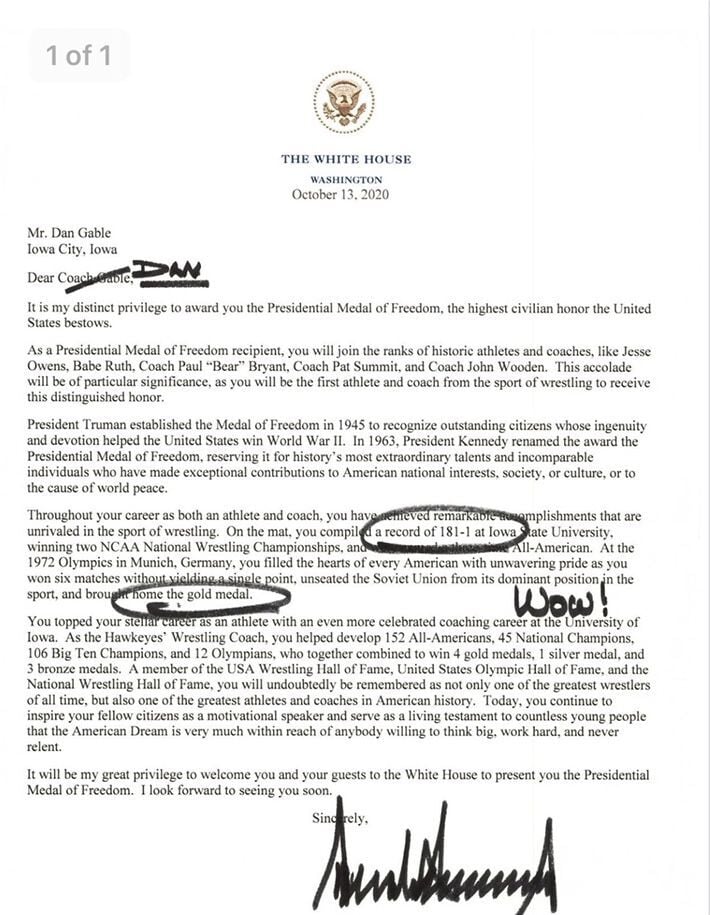 A copy the letter Dan Gable received from President Donald Trump announcing he was awarding the Waterloo native the Presidential Medal of Freedom. 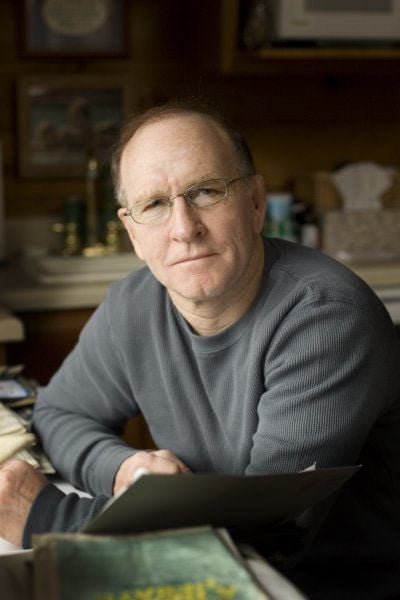