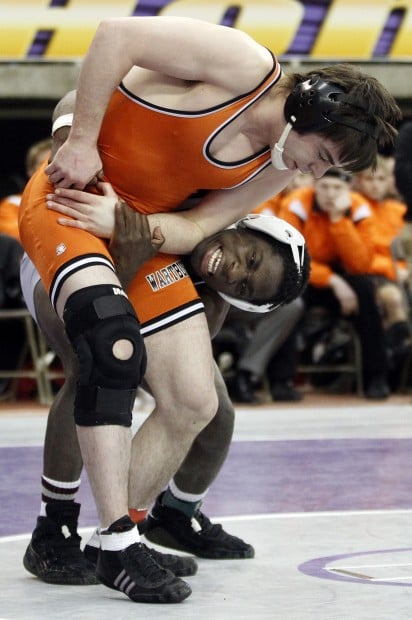 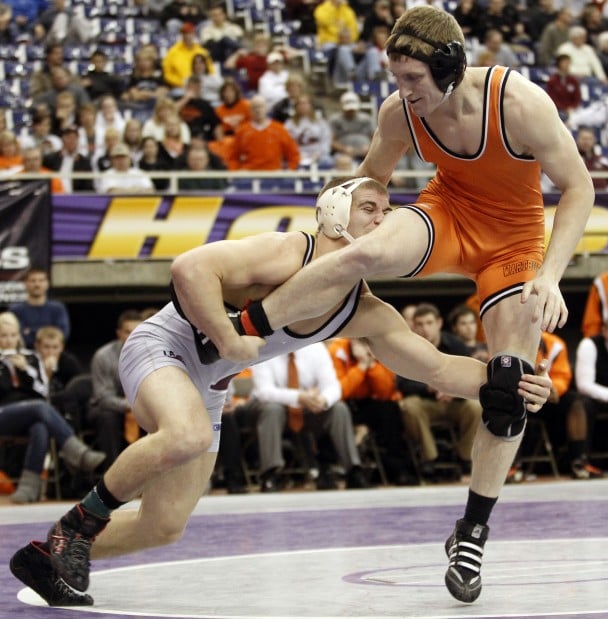 Wartburg's John Helgerson, facing, gets a hug from teammate Byron Tate after winning the 285lb match, giving Wartburg the Division III championship by one point over the University of Wisconsin-LaCross at the 2011 NWCA/Cliff Keen National Duals at the UNI-Dome in Cedar Falls Sunday, January 9, 2011. (BRANDON POLLOCK / Courier Staff Photographer) 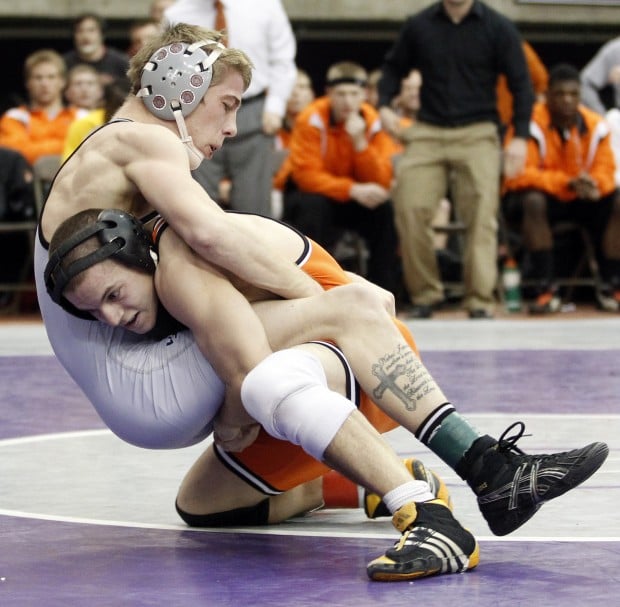 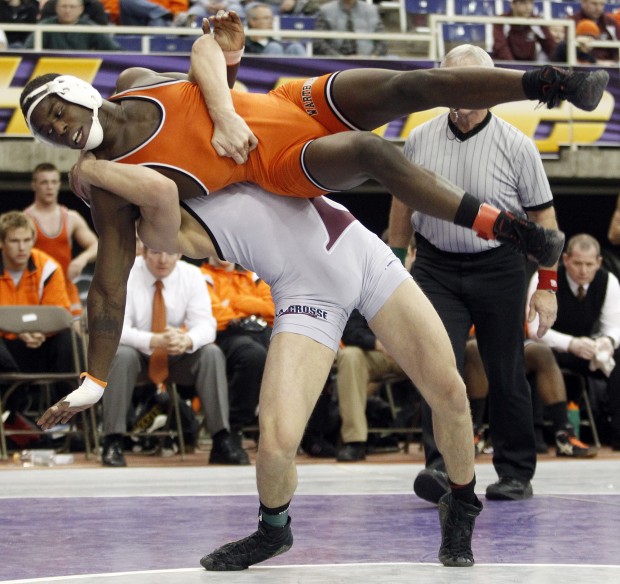 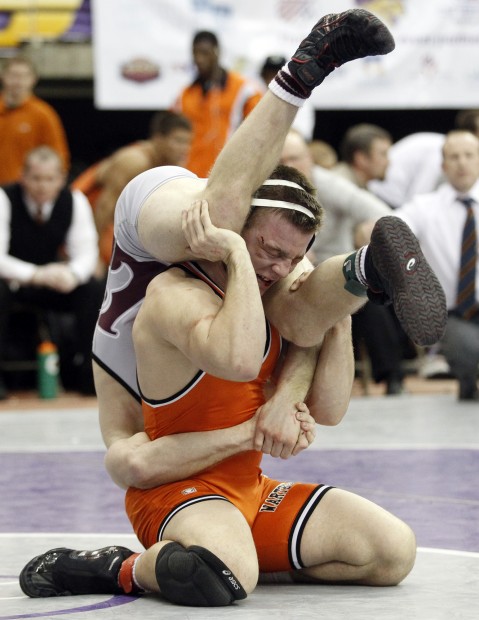 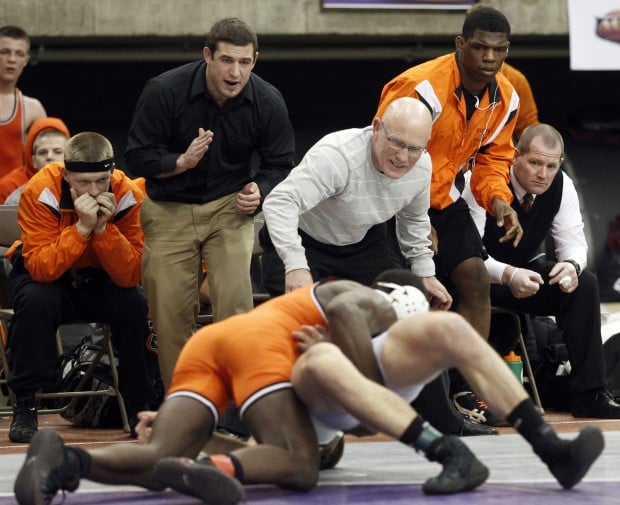 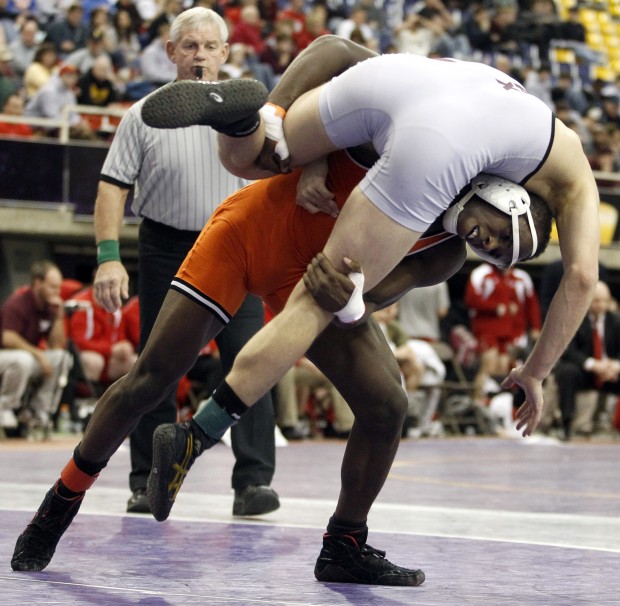 CEDAR FALLS, Iowa --- Wartburg's Jim Miller will be searching for the right formula right up until the Iowa Conference championships on Feb. 25.

Fortunately for the Knights, Miller had the right mix Sunday as Wartburg captured its fifth Division III NWCA/Cliff Keen National Duals championship at the UNI-Dome with a narrow, 16-15 win over Wisconsin-La Crosse.

"We have a lot of work to do," Miller said. "This was not a great performance. It was a good performance in that we won, and I'm happy the guys got to feel the experience of winning a championship, but it is 1going to take more than that at the national tournament."

Wartburg rallied twice from eight-point deficits with three matches left to pull out wins in both the semifinals (18-15 over Ithaca College) and against La Crosse.

But with defending national champion Byron Tate at 197 and top-ranked John Helgerson at heavyweight, the Knights know few squads can match them late.

"We are like the last defense," Tate said. "I embrace that role."

Tate and Helgerson were each 4-0 on the weekend and have been red-hot of late, including a pair of top-five performances at the Midlands last weekend.

This is Wartburg's first National Duals title since it beat La Crosse for the 2008 championship.

The differerence Sunday was Carrington Banks' major decision at 157 over Ryan Farwell, 12-4, where Banks got a takedown in the final 5 seconds to secure the major.

"We talk about how every point counts," Miller said. "One point wins championships, and there it is right there today."

For La Crosse, the only other team to wrestle in the Division III dual finals other than Augsburg or Wartburg, it was a gutty effort that fell just short.

"If you look up and down that bracket, I felt we had the hardest road to the finals," La Crosse coach and former Miller assistant Dave Malecek said. "We had (Delaware) Valley, who beat us last year, Coe in the quarters, than Augsburg, who had beaten us before.

"We had a tough road to the finals, but I was proud of our guys with how they fought, especially in the win over Augsburg.

"That was a good win for our team and our university."

The Eagles knocked off the top-seeded Auggies in the semifinals, 23-13.

Nebraska-Omaha lost the first two matches of every dual, but that didn't deter it from winning its third consecutive Division II title.

"It's a consistency thing. The hardest thing to be is consistent, and these kids fought back and picked up the slack," said Nebraska-Omaha coach Mike Denney. "(All-American) Mario Morgan started us every meet (at 141). We went down two matches every match, and Morgan was a hammer for us."

It was the seventh year in a row that Nebraska-Omaha made the finals of the Division II bracket.

"This is a national meet, and we prepare for it like it's a national meet. It's kind of interesting for wrestling that you have this now and another meet at the end of the year. It's a testament to our kids."

Wrestling has a hold on Rutt family

CEDAR FALLS, Iowa --- Typically, if John and Cathy Rutt want to see one of their children wrestle, it's a five- to six-hour drive ... in oppos…

Wartburg's John Helgerson, facing, gets a hug from teammate Byron Tate after winning the 285lb match, giving Wartburg the Division III championship by one point over the University of Wisconsin-LaCross at the 2011 NWCA/Cliff Keen National Duals at the UNI-Dome in Cedar Falls Sunday, January 9, 2011. (BRANDON POLLOCK / Courier Staff Photographer)