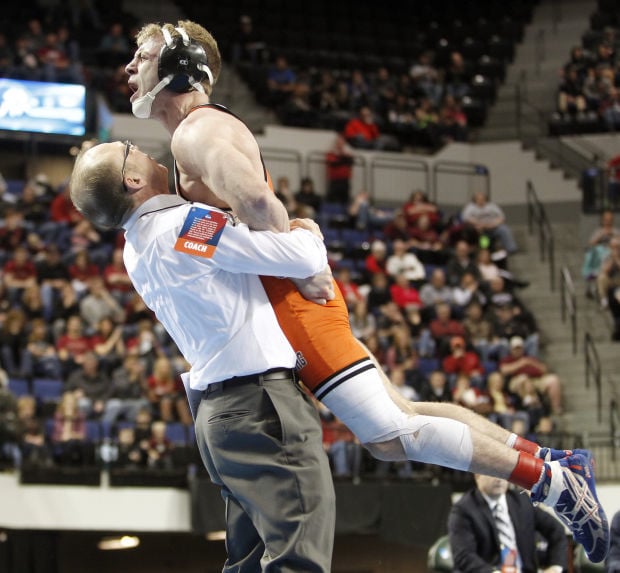 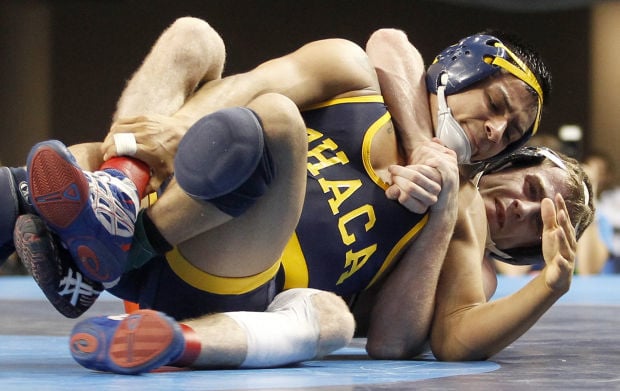 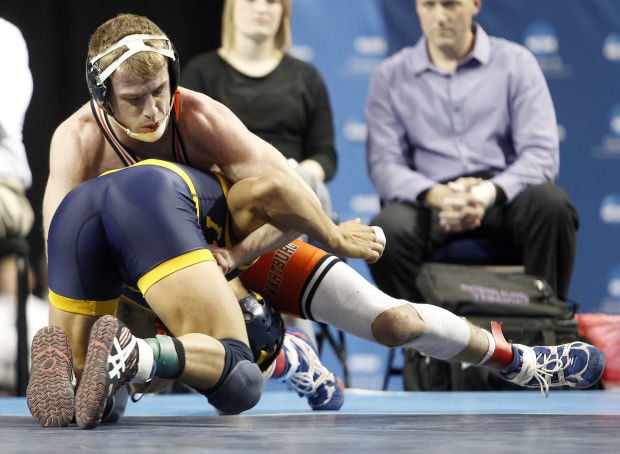 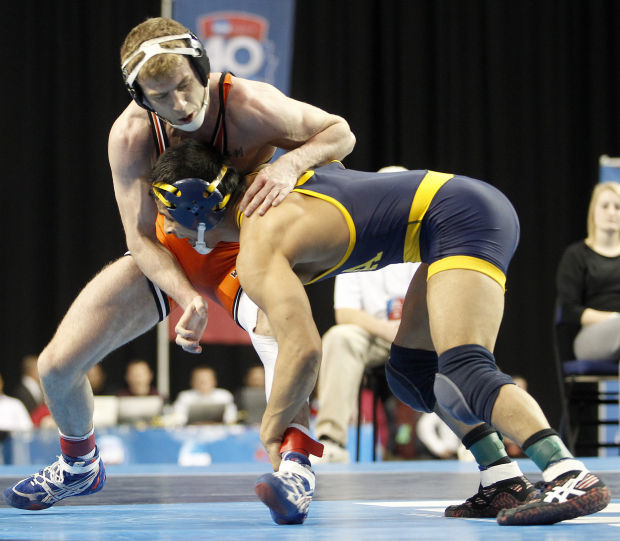 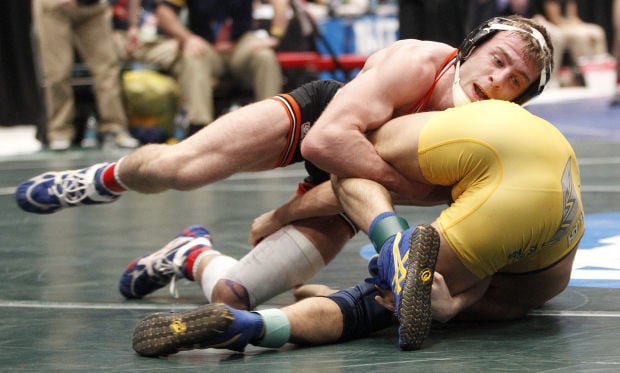 Wartburg's Kenny Anderson scrambles for a reversal against Wilkes' Myzar Mendoza in their 133-pound quarterfinal Friday at the Division III championships in Cedar Rapids.

NEW ORLEANS, La. — Kenny Anderson’s perseverance to reach his full potential is a better story than any athletic success he ever achieved.

Had Anderson not believed in himself first, he never would have impacted so many future teammates or athletes he coached.

That is why the national wrestling community was in mourning Monday following the announcement of the death of the former three-time NCAA Division III national champion at Wartburg College on Sunday at the age of 29..

According to the limited information wrestling Hall of Famer Jim Miller and current Wartburg College head wrestling coach Eric Keller have learned of the situation, Anderson was found unconscious in his residence in New Orleans by a roommate Sunday morning.

Anderson was set to begin his first season as the co-head wrestling coach at Holy Cross High School in New Orleans, a school that has been a pipeline in sending wrestling talent to Wartburg, and where former Knight national champion and current Loras head coach T.J. Miller was once a head coach.

Keller learned of his Anderson’s death in a phone call from former Wartburg wrestler Steven Kleamenakis, a native of New Orleans whose brother Anderson was living with.

“Total shock and disbelief. ... It is hard to process right now,” Keller said. “He was loved for who he was on the mat and who he was off the mat.”

“He was 29. I’m in shock,” added Jim Miller, who was Wartburg’s head coach when Anderson arrived in Waverly.

“I’m truly at a loss for words. I’ll never forget you, Kenny. You will be deeply missed. Prayers for the Anderson Family,” T.J. Miller posted on Facebook.

Keller said the level of support from across the nation has been overwhelming since the news broke.

Life on the mat a better fit for Wartburg pair

“There is a ton of respect out there for who Kenny was and the man he was becoming,” Keller added. “Alums, parents, and coaches from all over the country have been calling, texting.”

The heartbreak came on a day when Knights typically mourn and remember another former Wartburg great, Aaron Wernimont, who passed away suddenly in 2012 at the age of 26. Wernimont’s birthday was Oct. 20 — Sunday.

“We always honor Aaron on his birthday and educate who he was and what he stood for with our team,” Keller said. “Then to have this news on top of it. It is really hard.”

Anderson’s story is one of the best not just for the success he had on the mat, but how he even got to Wartburg.

Following a standout career at Billerica High School in Massachusetts where he was a three-time state champ and was inducted into the Massachusetts Wrestling Hall of Fame in 2011, Anderson found his way to Iowa Central Community College.

But stuck behind national champions Joe Colon and Patrick Hunter, Anderson returned home where for a year, eight hours a day, he washed buses full-time.

And every day, Anderson hated it.

“I was miserable,” Anderson said in a 2012 story. “Just wanted to get back to wrestling ... become a national champion.”

Wartburg’s staff reached out to Anderson. The Knights already had three former ICCC wrestlers on their roster — Carrington and Bradley Banks and Elard (C.T.) Coello, all of whom were close to Anderson.

Keller said his willingness to do anything to wrestle was inspiring.

“It is so crazy,” Keller said. “He spent an entire year doing something he obviously did not want to be doing. But it is one of those things ... a mindset where you make up your mind and throughout the process (washing buses) you tell yourself this is not going to be who I am, and he went out and found an opportunity to change his life and be successful.”

Miller said he made many trips to Iowa Central to recruit but did not know Kenny Anderson.

“I think back to his career and it is funny to me that I did go to Iowa Central to recruit and he was behind Joe Colon,” Miller recalled. “I don’t think a lot of people knew who he was.

“Kenny had reached out to us and one day Carrington (Banks) came into my office, and I asked him how good is this Kenny Anderson? Do you think he could make our team? And Carrington said, ‘Yep. Definitely.’

“Five minutes later, Bradley (Banks) walks in and I ask him the same question and I got the same exact answer. I got on the phone right after and got in touch with Kenny.”

When Anderson got to Wartburg it took a while for him to make his impact. His first action was at the NWCA National Duals and he was major decisioned by returning all-American Nathan Fitzenreider of North Central College. Two months later, Anderson beat Fitzenreider for his first NCAA championship at 125 pounds.

After his career, he spent time assisting at Wartburg and most recently at Cornell College in Mount Vernon.

With experience, depth and versatility, UNI has high expectations for the 2019-20 women's basketball season.

College football: No. 11 UNI has to keep improving

Momentum is a fickle beast that can be won and lost in a moment.

Mason Niesen is starting to become the player UNI thought he could be following a standout high school career at Denver.

Tickets on sale for the 72nd annual Christmas with Wartburg

The talents of more than 300 students will be on display Dec. 6-8 during the 72nd annual Christmas with Wartburg.

Wartburg's Kenny Anderson scrambles for a reversal against Wilkes' Myzar Mendoza in their 133-pound quarterfinal Friday at the Division III championships in Cedar Rapids.