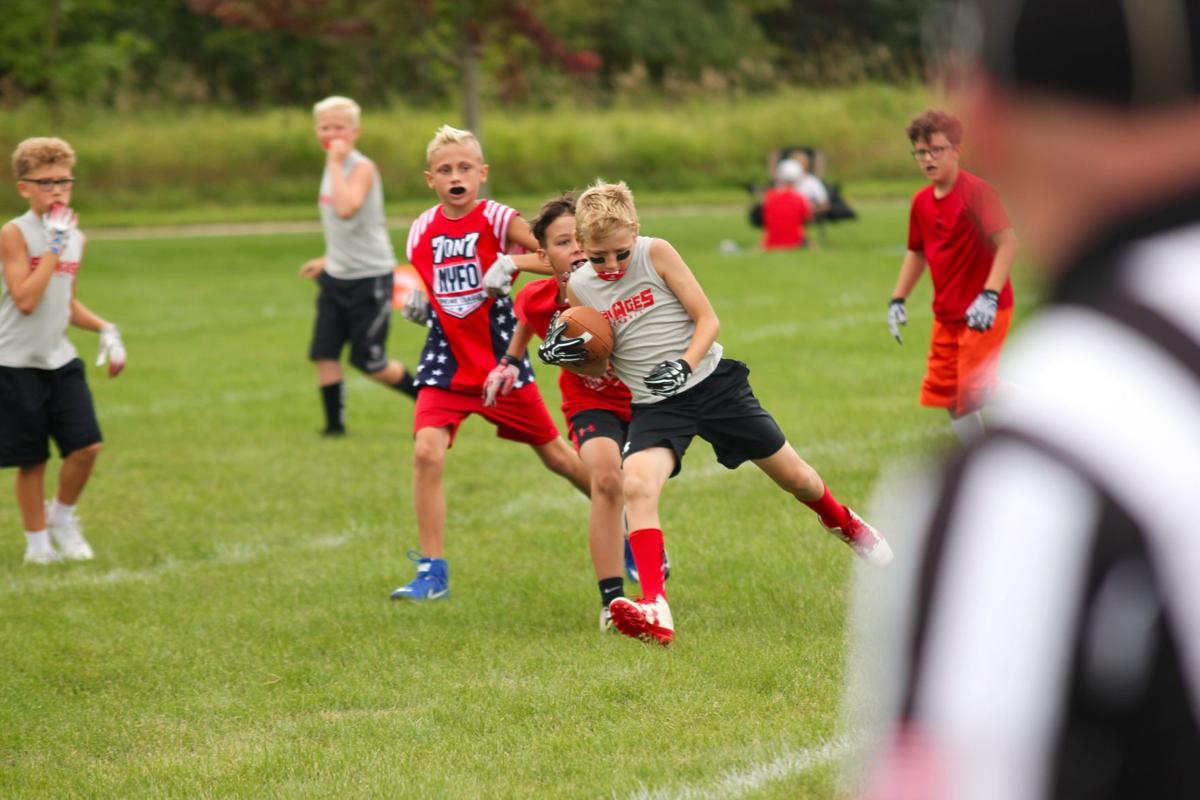 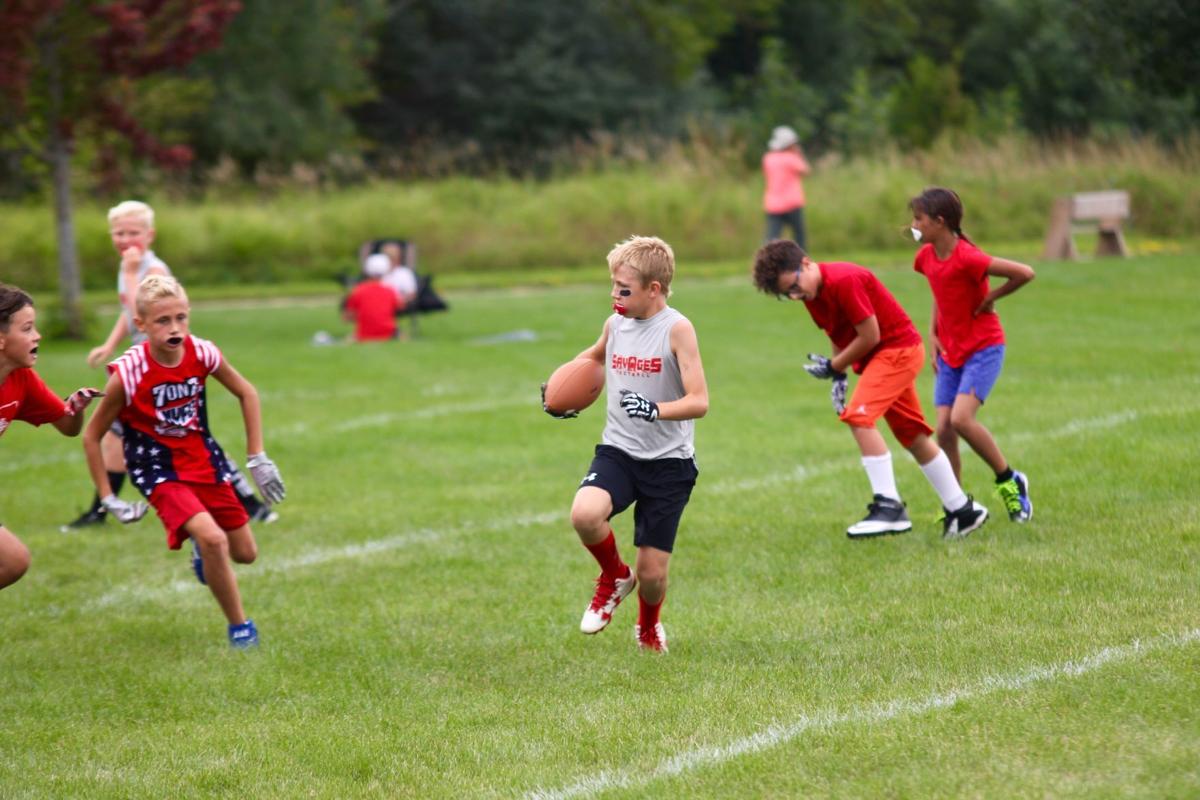 A player from the Cedar Falls Savages carries the ball during a recent 7-on-7 youth football game. 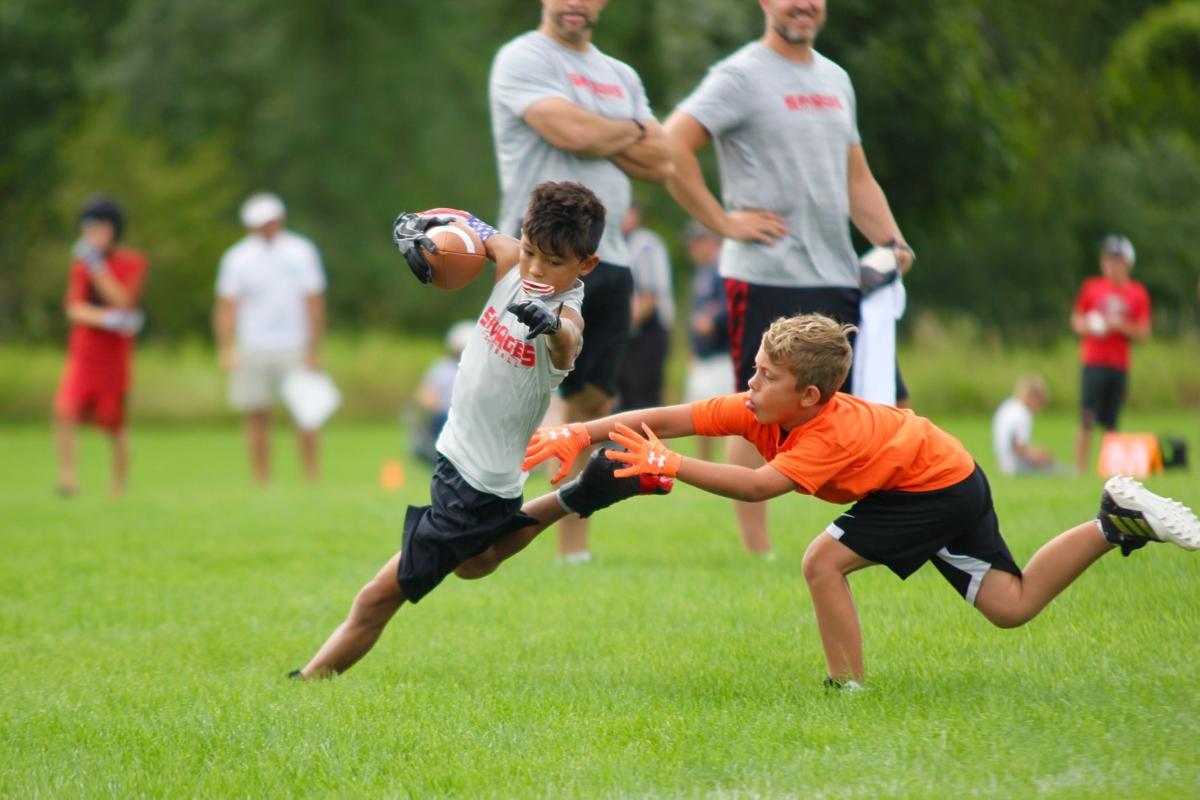 A player from the Cedar Falls Savages tries to elude a defender during a recent 7-on-7 youth tournament game in Green Bay, Wis.

WATERLOO —- For parents concerned about allowing their kids to play tackle football at younger ages, there’s a program poised to grow in Northern Iowa that can help alleviate fears of football-related injuries.

It’s 7-on-7 football. It’s been popular throughout the rest of the country but has been slow to develop in the state of Iowa. It’s played without pads and there is no tackling or blocking allowed. Its purpose is to make football safe for all ages while teaching football fundamentals for the skill players.

“It’s not tackle, it’s not flag football,” said Richard Carter, one of the organizers for the development of the league. “It’s like what we did in college when I played. You work with the skill players, your quarterbacks. You concentrate on certain skills, learn the passing game and how to defend the passing game. But it’s safer because it’s one-hand touch football.”

A few teams have been formed in Iowa. However, because the competition is so spread out, Trevor Bollers, a former University of Iowa football player, has dreamed of bringing more teams to the state so team travel is not so extensive.

With the support of Iowa City West, Clear Creek-Amana and Cedar Rapids Jefferson in 2018, he created the first annual Playmaker Iowa Elite Tournament. But Bollers wanted to expand 7-on-7 to younger ages.

Last year, he approached Carter, a former University of Northern Iowa football player and current youth sports coach, about gathering some younger kids for a tournament. The first person Carter called for help was his UNI quarterback, Tom Petrie, and they formed a third/fourth grade team in Cedar Falls called The Savages.

“We got 14 kids together,” Carter said. “It was a blast. We played in three tournaments, two in Tiffin and one in Green Bay, Wisconsin.”

7v7 Football Inc. is recognized as a non-profit. Other pioneers that have brought 7-on-7 to Iowa are Team Iowa and Level Up, which formed high school travel teams that compete across the nation. The Fire Dragons, Achievers and Savages started the youth club scene with multiple teams in each division.

The aim for 2020 is to bring a state tournament to the Cedar Valley and see other locations across Eastern and Central Iowa host events. The season runs from May through August.

“The mission is to develop skilled players in the state of Iowa and to teach life skills in a loving, family environment. We play against the kids we see in other sports. Our kids know each other because we see them at basketball and baseball tournaments,” Carter said.

This year’s tentative schedule includes the Playmaker Spring Warm Up in Waterloo May 3, followed by events in Tiffin and Durant. Tiffin also will host the Playmaker Iowa Elite July 18-19, and the state tournament will be held Aug. 1-2 in Oskaloosa. Organizers are trying to get teams from Chicago, Kansas City and Green Bay to attend.

Other former UNI players who are involved in 7-on-7 include Araf Evans in Omaha and Dre Dokes in Missouri, both of which can also be involved in events scheduled in Iowa.

Rules may vary slightly in different tournaments. Each game lasts 25 minutes with a running clock. The field is 50 yards in length, including a 10-yard end zone. For third- and fourth-graders, the field is decreased by 10 yards. The offense always starts on the 40-yard-line with the choice of the hash mark. Quarterbacks can never run the ball. A play ends after the four-second time limit to throw a pass has closed or when a player who has caught the ball is touched by one hand of a defending player. Teams are allowed to run the ball at any point in the game.

An organizational summit will be held sometime in February for interested parents. For further information, contact 7v7@iowa7v7football.com.

According to ESPN, the highest paid employee in 28 states is a football coach, while basketball rules in 12 others.

A new leader has taken over at The Courier.

Business After Hours is a unique opportunity for Grow Cedar Valley investors to network and experience various business locations throughout the Cedar Valley.

7-on-7 youth football tournament could come to Cedar Falls

The city tourism board is financially helping the organizer of a 7-on-7 youth football league with his plans to bring a Midwest regional tournament to Cedar Falls.

A player from the Cedar Falls Savages carries the ball during a recent 7-on-7 youth football game.

A player from the Cedar Falls Savages tries to elude a defender during a recent 7-on-7 youth tournament game in Green Bay, Wis.