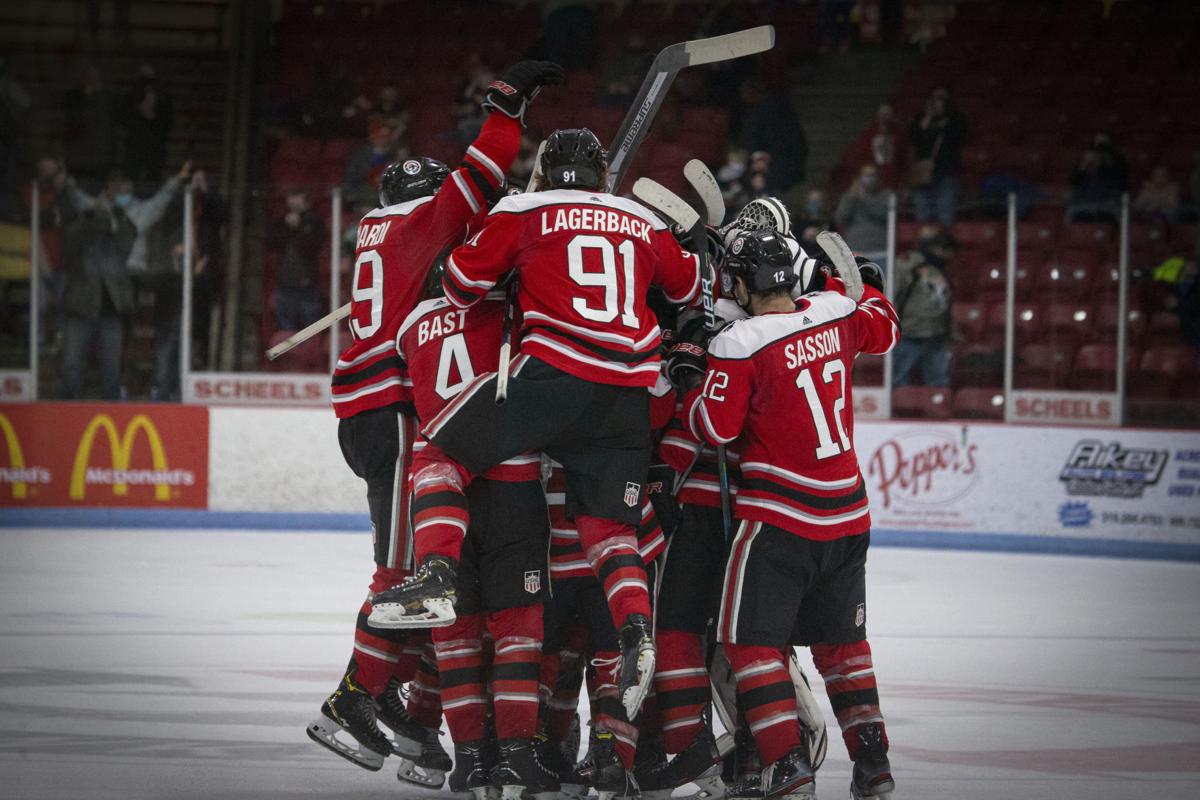 Members of the Waterloo Black Hawks swarm goalie Emmett Croteau following a 4-3 shootout victory against Omaha during the 2020-21 season. 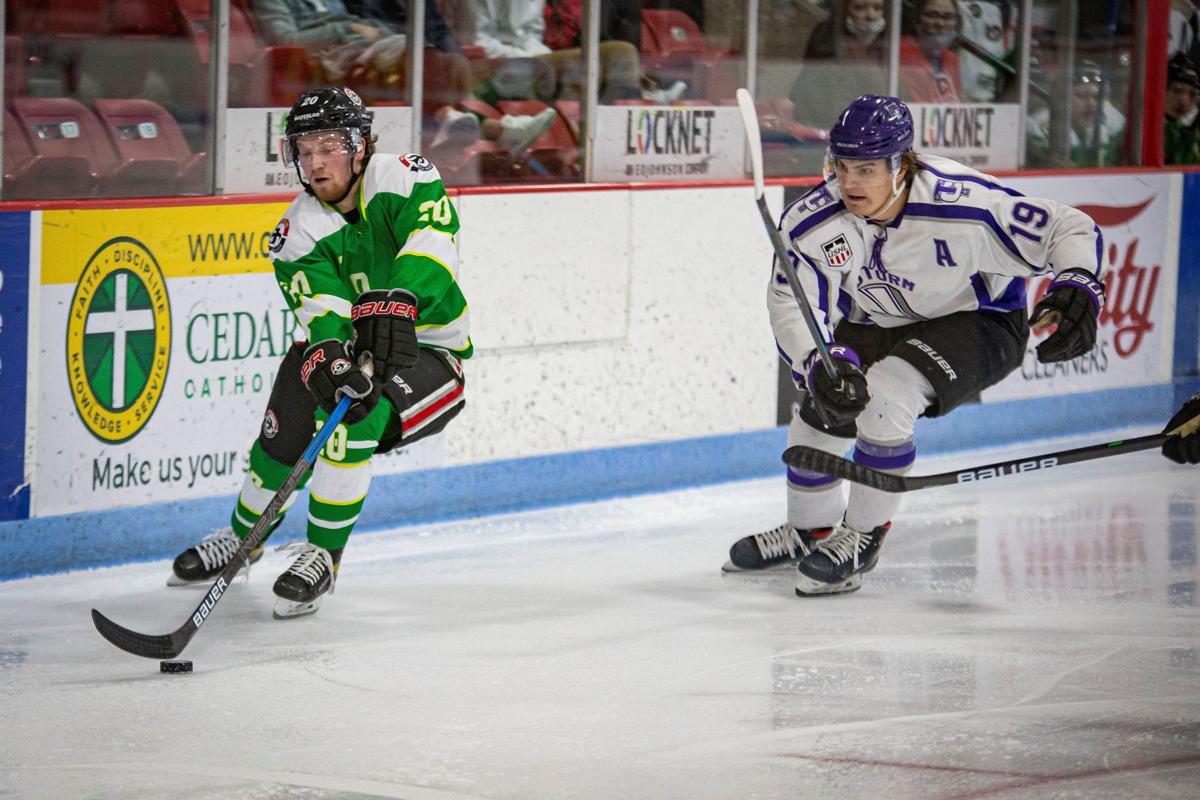 WATERLOO – As much as P.K. O’Handley likes to play golf, he’s not happy he is playing it so early this spring.

For just the third time in his 19 seasons as head coach of the Waterloo Black Hawks, O’Handley is not coaching in the United States Hockey League’s Clark Cup playoffs.

Waterloo jumped on Des Moines early as the Black Hawks closed the 2020-21 season on a three-game win streak with a 6-3 win over the Buccaneers.

“It is still raw. It is really hard,” O’Handley said this week after Waterloo finished 22-30-1 in the COVID-19 abbreviated USHL season. “For our organization it is not what we are used too, and is not the standard we want. I could give you a bunch of adjectives where I am at with it all, but it is what it is. We learn and we move on.”

Where did it go wrong?

The easily identifiable reasons weren’t hard to find. Multiple injuries hurt chemistry within the team. Youth showed up at inopportune times. A talented goalie trio did not have the seasons any of them expected to have. Those are just a few.

“After doing this as long as I have it comes down to you have to have high-end character guys that pull the rope in the right direction,” O’Handley said. “For a million different reasons that can be talked about, don’t need to be talked about… I’m not sure when things went wrong we weren’t all pulling the rope in the same direction.

“We didn’t have the character to get over the hard situations and there are a lot of hard situations that surface in a junior hockey season. It was a hard year, period.”

The difficulties started early for Waterloo.

Despite months of preparation and numerous protocols, the Black Hawks were hit hard by a COVID-19 outbreak that paused their season briefly. It not only ran through the locker room, but almost every Waterloo coach tested positive for the virus, too.

When that passed the injury-bug struck and it struck hard. The Black Hawks had nearly 200 man-games missed by season end.

In an injury-shortened season, Dane Montgomery has set career highs in goals (8) and assists (15) in just 26 games.

“It was Murphy’s Law,” O’Handley said. “On any given day what could go wrong went wrong and something usually went wrong every day. To start, we thought we did everything right and we got slammed with COVID. COVID effected much bigger things than us playing hockey, but that was extremely challenging.

“It was very challenging on a lot of levels. I go on and on about those challenges, but to surmise, no, I don’t think I’ve seen a year as challenging as we had.”

To pinpoint exactly what was the missing ingredient, O’Handley has an idea.

O’Handley and general manager/associate head coach Shane Fukushima have a formula that has won three Anderson Cups (2006-07, 2013-14, 2017-18), sent hundreds of players to the collegiate ranks and numerous players to the National Hockey League. O’Handley believes that formula still works.

But despite that admission, O’Handley says there were some things that didn’t get mixed into the equation during the 2020-21 season. Some of that was missing because of COVID-19 protocols that did not allow teams to congregate in the locker room for long periods of time, an essential and important element in junior hockey to have success.

“We have such great culture here,” O’Handley said. “Usually the older guys are able to articulate and help younger players embrace the culture. I think with the uniqueness and strangeness and craziness of the season we never got there until the very end.

The end is what O’Handley is going to focus on moving forward. The Black Hawks finished the year with three consecutive wins and victories in five of their final seven games. Injured players began to return and a youthful trio of Garrett Schifskey, Carter Batchelder and Jake Rozzi gave a glimpse of the future.

And 17-year old goalie Emmett Croteau impressed the Black Hawk coach. The USHL’s youngest goalie this season, Croteau appeared in 16 games because of injuries to anticipated starting duo Charlie Glockner and Jack Williams. His stats don’t pop – 7-6-0 with a 3.67 goals against and a .887 save percentage, but O’Handley liked the growth potential in his young netminder.

“He had his growing pains,” O’Handley said. “But he was thrown into the fire. When you look at the evolution of a junior hockey player at that age to where he ends I don’t know if there was a guy that didn’t check every box of progression as it went. That is a very bright spot for the organization going forward.”

Building the rest of the roster is a bit more complex.

Expect veteran players like John Waldron, Ryan O’Hara, Matt Argentina, Michael LaStarza, Jacob Jeannette, Mason Reiners, Tucker Ness and Cooper Wylie to likely return. There are some other veterans that could return, too.

“It is interesting,” O’Handley said. “When you look at what could happen in college with the transfer portal and the extra year awarded. There could be some junior eligible guys pushed out of roster spots or playing time. We have our ears to the ground. There are so many moving parts right now it is going to be interesting to see how it all shakes out.”

Currently, Black Hawks assistant coaches led by Fukushima are on the road scouting. USHL combines will be conducted this month prior to the league’s two-phased draft later in May.

Members of the Waterloo Black Hawks swarm goalie Emmett Croteau following a 4-3 shootout victory against Omaha during the 2020-21 season. 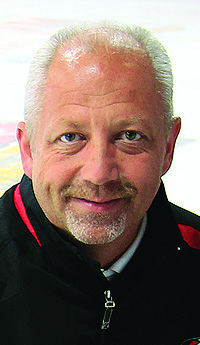