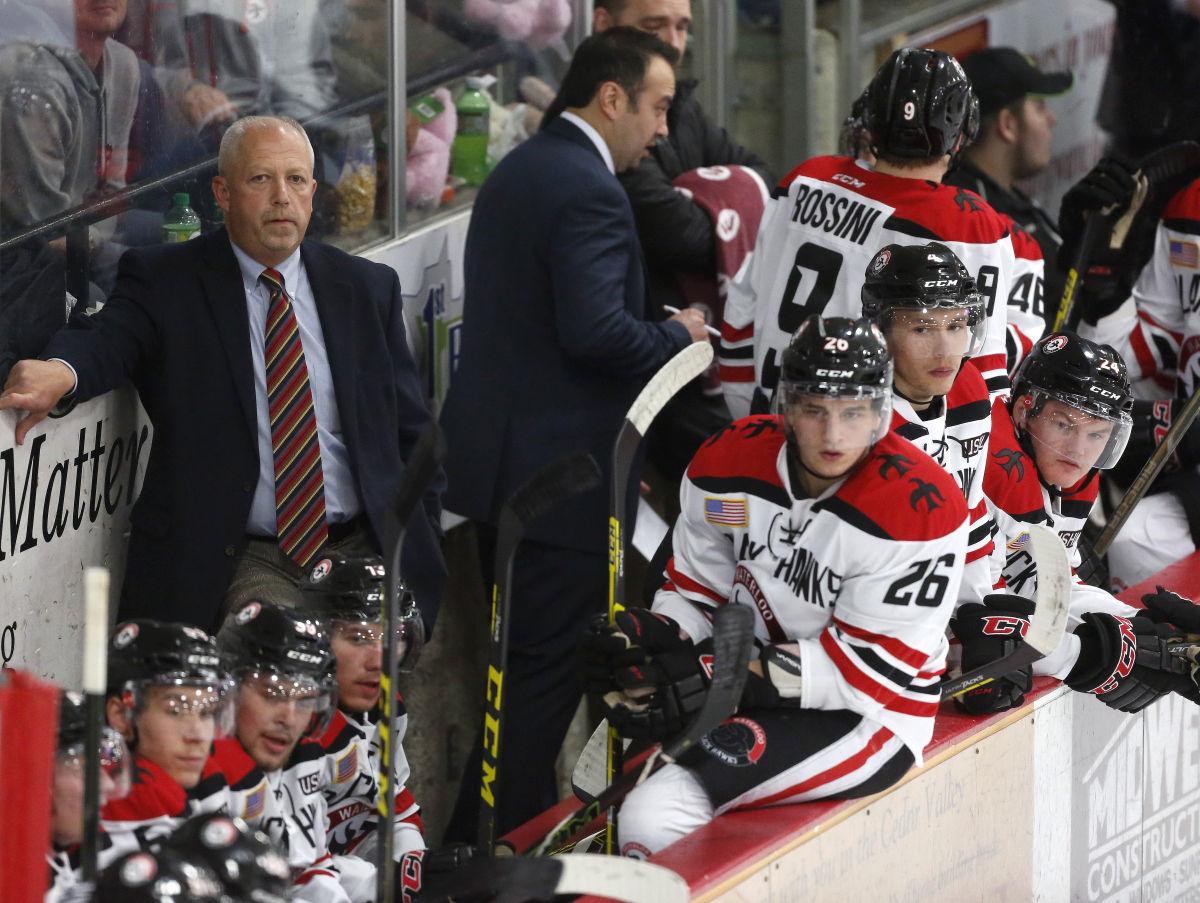 Waterloo head coach P.K. O'Handley watches the game from the bench during a 2015 game. 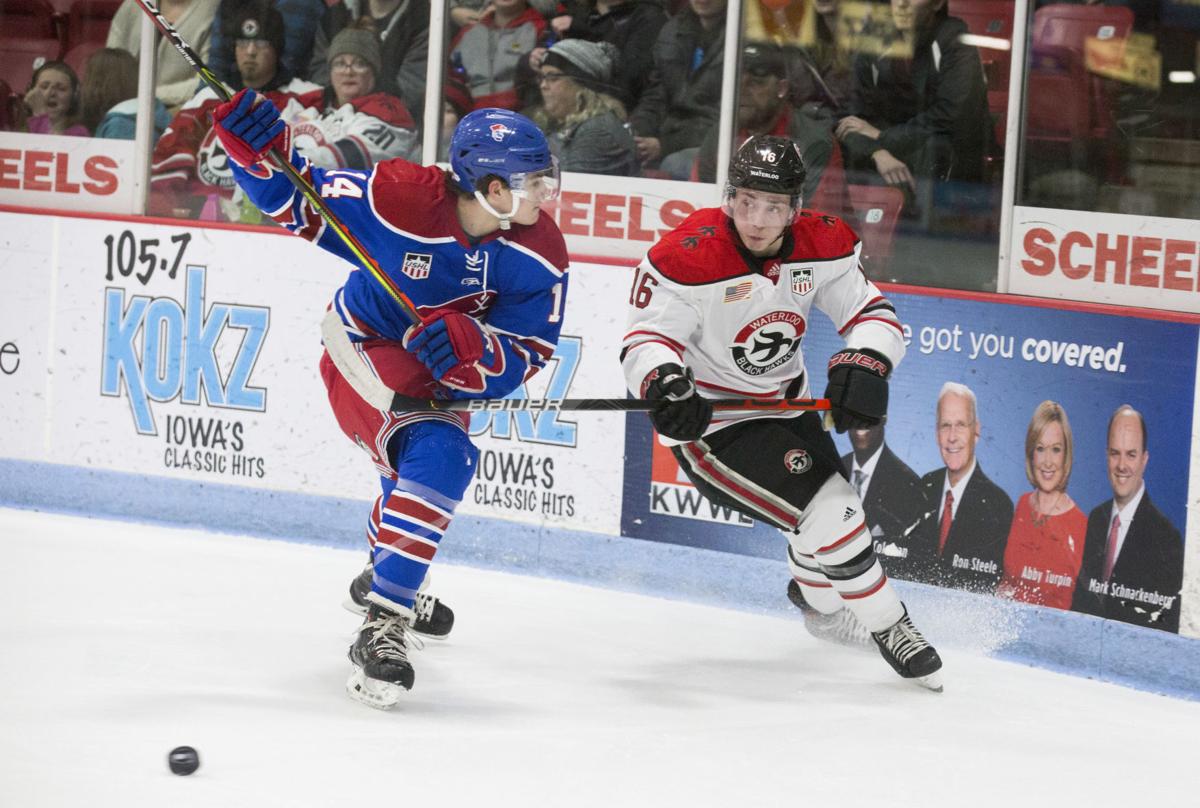 Waterloo's Ethan Szmagaj passes the puck as Des Moines' Alex Laferriere comes from behind during a game earlier this season. 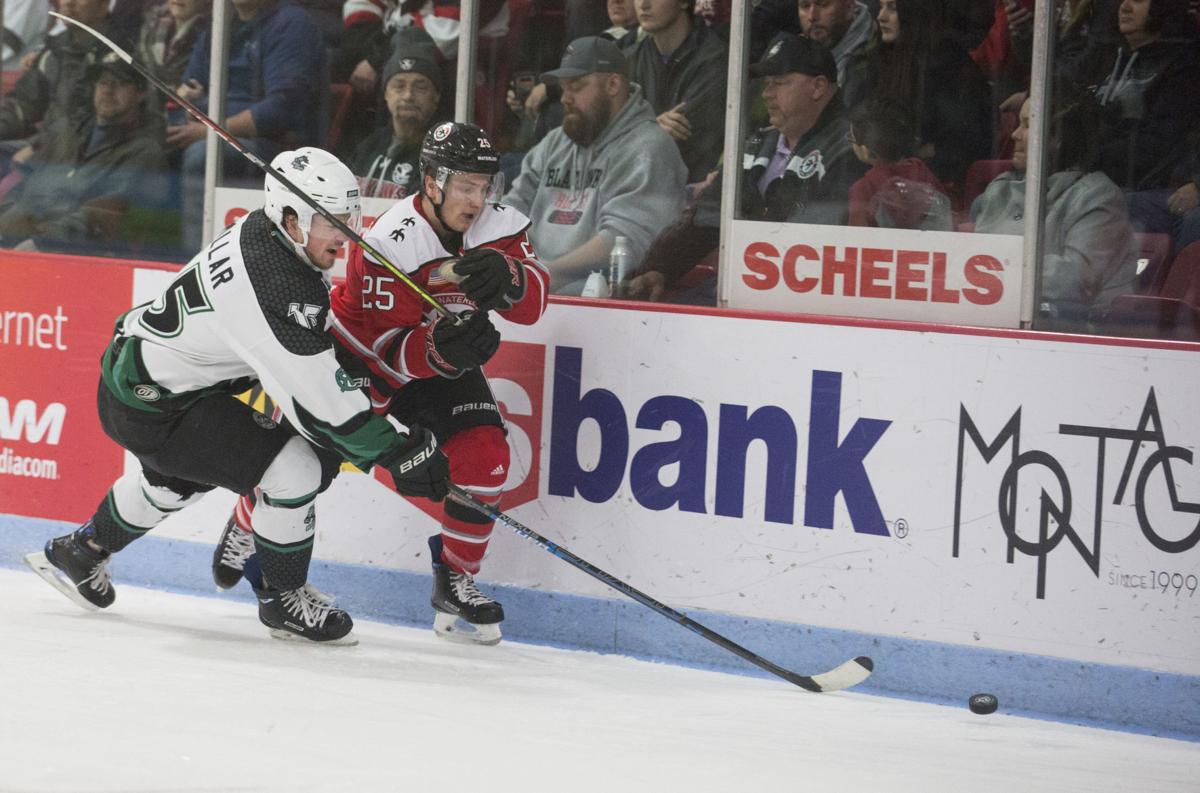 Waterloo's Wyatt Schingoethe battles for the puck with Cedar Rapid's Jack Millar during a game earlier this season.

WATERLOO – There is a good chance Shane Fukushima will be sequestered inside his cabin near Superior, Wisconsin, on Monday.

P.K. O’Handley will probably be holed up in his office inside Young Arena, and probably another Waterloo Black Hawks’ staff member quarantined inside the player’s meeting room.

There was a ton of pomp and circumstance about how well the National Football League conducted its annual draft last month virtually.

General managers, scouting directors and head coaches from the United States Hockey League were probably wondering what was the big deal. The NFL virtual draft was a first-time novelty, but for more than a decade that is how the USHL has conducted its two-phase entry draft into the top Tier-1 Junior A hockey league in North America.

“We have done it forever,” said O’Handley, who just completed his 18th season as the Black Hawks’ head coach.

There will be one big difference this year when Phase I of the USHL draft starts at 3 p.m. Monday: O’Handley, Fukushima — Waterloo’s associate head coach — and assistant coach Taylor Ward won’t be side-by-side inside a “War Room” at Young Arena.

The coronavirus pandemic has fired a hard slap shot at each of the 15 teams in the USHL in how they will operate on draft day.

“At this point in time bringing all of us coaches, our scouts from Indiana and Minnesota inside Hockey Central at Young Arena wouldn’t make a lot of sense. I don’t think that is going to fly, either,” said Fukushima, who has been responsible for developing and overseeing the Black Hawks’ scouting and scouting staff since 2006. “As a league it is not going to be different because that is how we have ran our drafts. We have ran our drafts online for a long time, it is what we do, so not making picks from one building is not new.

“What is different is not having guys on your left and right to be able to discuss the current pick. ... We are going to have a lot of video time with each other while trying to manage multiple computers.”

Fukushima, who has self-quarantined himself in Wisconsin since the league canceled the remainder of its season March 18, hasn’t ruled out returning to Waterloo to conduct the draft.

“My internet up here is lightning fast, so knock on wood it is good enough to do it up here,” Fukushima said. “The plan is to stay up here right now, but if it is clear that one or two of us can stay away from each other, I may come back. If coach and I are in one room that will benefit us, but if we can’t make that happen, if that is not logical or safe, we will do it virtually.”

O’Handley agrees not having the entire staff in one room will make communicating analysis on prospective picks a challenge.

“That is one part of it, but is also fun just being together,” O’Handley said. “You are sitting there anticipating selecting a player and he comes off the board and then the reaction, reading the body language of everybody and coming up with your next best pick, that is the rush, the fun of it. That will be different.”

Monday’s Phase I is for players with 2004 birthdates.

“Day one is more projection,” Fukushima said. “These are players that are two, three years away. You’re trying to fill in holes that you project you will have in the future. So, you are forecasting more than anything.”

Phase II is open to all players eligible for junior hockey who are not currently protected by another USHL team.

When the season was canceled, Waterloo led the Western Conference with a 33-14-2 overall mark. The Black Hawks will see many of their leading scorers move onto the collegiate ranks as well as potentially both of its goalies – Logan Stein and Gabriel Carriere.

Pinpointing needs and who may return for the 2020-21 season is murky.

O’Handley is confident about 10 guys who are more than likely returning, but both he and Fukushima say there is a ton of uncertainty.

After the collegiate season, NHL teams sign collegiate players who are free agents, but there haven’t been as many of those signings because of the uncertainty created by the pandemic about whether the NHL can finish the 2019-20 season and begin the 2020-21 season.

Those signings open up spots on collegiate rosters that are many times filled by junior hockey players. If those spots don’t open, players who planned on leaving for the collegiate ranks will still have junior hockey eligibility.

“The uncertainty above us is a factor,” O’Handley said.

Fukushima said while Phase I is forecasting the future, Phase II is for more specific needs to the upcoming season.

“The obvious thing is we are going to need one, probably two goalies,” Fukushima said. “Goalie in every draft is a need. We lose some scoring so we have to look at a couple of options that way, but we do feel like some of the guys returning are ready to insert themselves in a more prominent role.

“We are hoping we will have half of our D core back, but we are really looking at it as we are losing everyone. That is what you really do. You are expecting the worse and you will be over prepared so that is what we are going to do.”

Another challenge is the Black Hawks have no idea when they will hold a tryout camp. Typically, it’s the first week of June after the Clark Cup playoffs.

However, Young Arena is closed because of COVID-19 measures through May 15 as are ice sheets in the Chicago area the Black Hawks have used previously. If tryouts are pushed back into July, for instance, USA Hockey mandates teams cut down to a 30-man roster by early July.

That is a league-wide challenge because the league is scattered over eight Midwest states with eight different stay-at-home orders in effect.

“Also, if we draft a European or a Canadian player, can they even get down here for a tryout?” wondered Fukushima. “It is a tangled mess right now that we are go have to work through.”

Typically, players, particularly high-schoolers, begin reporting in August to begin school, with the remainder of the team arriving the first weekend in September and preseason games starting in mid-September. The USHL regular season begins the last week of September or first week of October.

“There are all kinds of scenarios,” O’Handley said. “This is a pretty complex league. … There have been a lot of discussions, but there is so much uncertainty there is not a ton of decisions being made that really need to be made public at this point in time.

“We don’t know what we don’t know. I can’t speak for the league. The only thing I’m worried about is the Waterloo Black Hawks, and we are looking at all kinds of scenarios of when we can have camp. It certainly is not going to be in June like it normally is. We are hopeful, but perhaps in July or late July. We are planning on our future camps going on in August at this point in time.

“We got to plan month-by-month and be prepared if that deadline doesn’t come to fruition to move to Plan B and then maybe to Plan C.”

As far as the start of the season, O’Handley remains optimistic it will start on time.

“Of course, we are hopeful,” he said. “I can speak for our sponsors and fans, everybody wants to start normal. What is that going to be? We don’t know. We are planning like it is, and we will adjust accordingly.

“The Waterloo Black Hawks will play again. There is no doubt about that. When that happens we will be ready to go.”

Prospective future Waterloo Black Hawk players and families will begin arriving later this week in the Cedar Valley for the first of four camps that will last into early August.

Prospective future Waterloo Black Hawk players and families will begin arriving later this week in the Cedar Valley for the first of four camps that will last into early August.

Waterloo head coach P.K. O'Handley watches the game from the bench during a 2015 game.

Waterloo's Ethan Szmagaj passes the puck as Des Moines' Alex Laferriere comes from behind during a game earlier this season.

Waterloo's Wyatt Schingoethe battles for the puck with Cedar Rapid's Jack Millar during a game earlier this season.