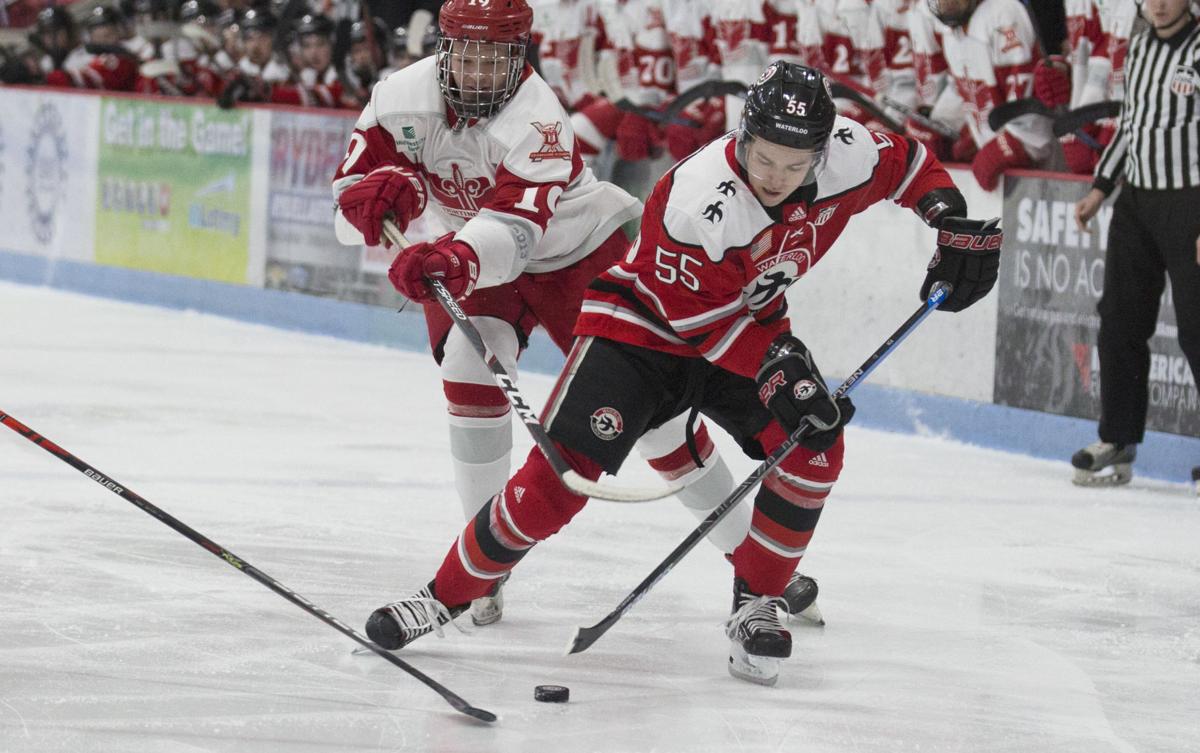 Waterloo's Dane Montgomery keeps the puck away from Dubuque defenders during a 2020 game at Young Arena. 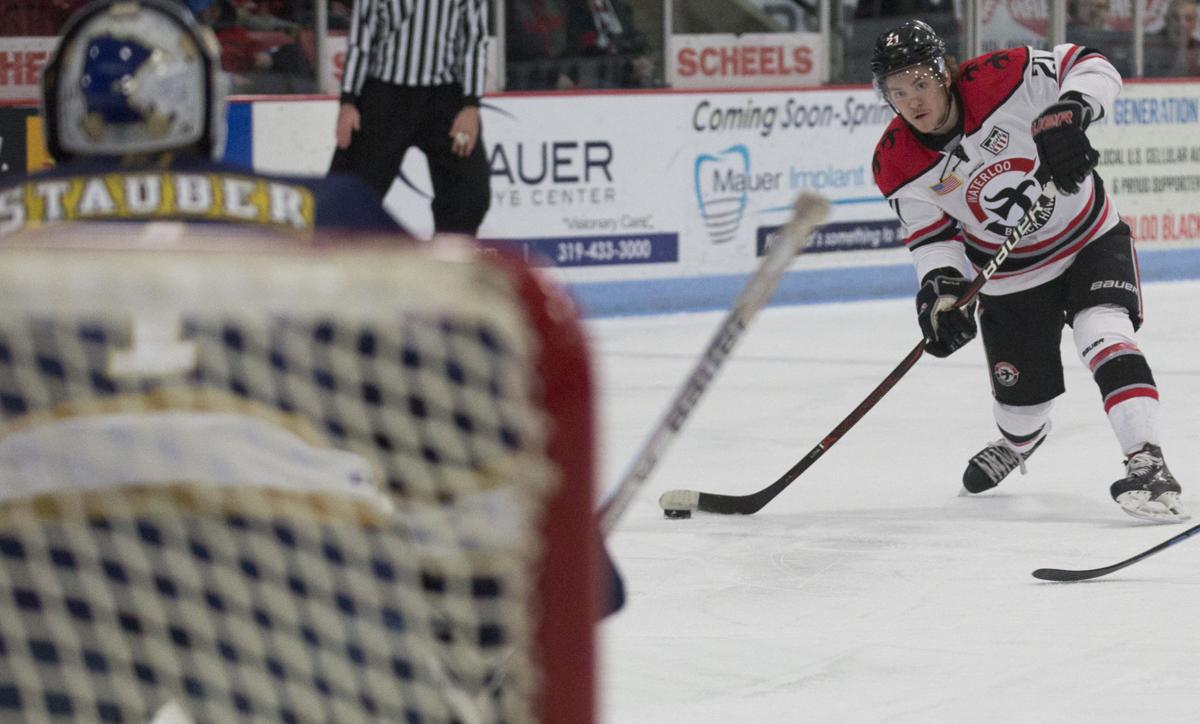 WATERLOO – Dane Montgomery can’t wait to put on the Green, Gray and Black sweater of the University of North Dakota.

As a native of Grand Forks where UND resides, it has been a life-long dream for the Waterloo Black Hawks forward.

Whether Montgomery puts that sweater on next fall or in the fall of 2022 is still up in the air. But when he does, Montgomery will be a driver which is how Black Hawks’ head coach P.K. O’Handley describes the 5-foot-9, 165-pound forward.

And selfishly, O’Handley hopes Montgomery will driving and directing the Black Hawks during the 2021-22 season.

“He is a driver with his personality and his voice. The way he plays he is a driver,” O’Handley said. “He drives play with his tempo, but I think he drives the room, too, with his voice and focus. He is a determined young guy and very mature person. When he talks people listen.

“He is thoughtful in what he says and is pretty cerebral in his thoughts and is able to verbalize them. That is rare for this age group.”

Unfortunately for the Black Hawks, Montgomery has not been able to drive the home team near as much as he wanted since debuting with the United States Hockey League franchise in 2018 as a 16-year old.

After playing in 36 games that season, Montgomery was limited to 32 games a year ago because of an injury to his wrist that he re-broke in a game at Dubuque. He missed two months returning to the lineup late in the COVID-19 paused season and ended up having surgery again this offseason. Rehab for that surgery caused Montgomery to not appear in his first game until Jan. 22.

In 26 games this season, Montgomery, took a high hit in a game at Tri-City on March 18 that caused him to sit out seven games, has set career highs in goals (8) and assists (15).

“I think now that I’m healthy for the first time you can really see what I can do,” Montgomery said. “I’m kind of showcasing myself with being healthy. The last two years I wasn’t really healthy, don’t get me wrong, I did what I could do and I’m not disappointed at all with my past two seasons other than obviously I’d like to have a couple more points here and there.

“But again, I think I’m really showcasing myself as a healthy player, a two-way player that can play on the penalty kill, power play. My overall pride is being a two-way center playing on both ends of the ice.”

It has been a tough season for Montgomery and the Black Hawks who wrap up their season Friday and Saturday with home games against Des Moines at Young Arena.

Youth and an incredible amount of injuries to key players will see Waterloo (20-30-1) miss the USHL playoffs for just the third time in O’Handley’s 19 seasons. The Black Hawks last missed the Clark Cup playoffs in 2015-16 and prior to that it was 2005-06 under O’Handley.

“It has been very different,” Montgomery said of the season in general from new COVID-19 protocols to the Black Hawks play on the ice. “From the start having to come into the rink a different way every day after coming in the same way for two years…even that one little change is like wow. It really puts into prospective how big something like this can be. Everything has gotten slower. It seems it’s been such a long year just because every day you don’t know what is going to happen.”

As far as the season went, Montgomery said it is hard not to talk about all the injuries.

“We’ve never had a full lineup,” he said. “We had injuries from the get, go right to the end. It is very unfortunate. Again, it is what it is and odd year and in that sense it is really different because we haven’t been able to really show who we have as a team. We have in instances, a lot of guys have stepped up and played bigger different roles than what they expected. It has been good from that standpoint that everyone to get in every part of the lineup, every situation just to better their game all around.”

Montgomery is eligible to return to Waterloo next season but said that decision lies with North Dakota and will be decided after the season is over.

O’Handley says the more Montgomery has played the better he has gotten.

“His best hockey is ahead of him,” O’Handley said. “His hockey right now for us has been really good. His leadership is really good. There is a maturity you don’t see day in, day out with this age.”

For just the third time in his 19 seasons, Waterloo Black Hawks head coach P.K. O’Handley is not coaching in the Clark Cup playoffs.

Waterloo's Dane Montgomery keeps the puck away from Dubuque defenders during a 2020 game at Young Arena.