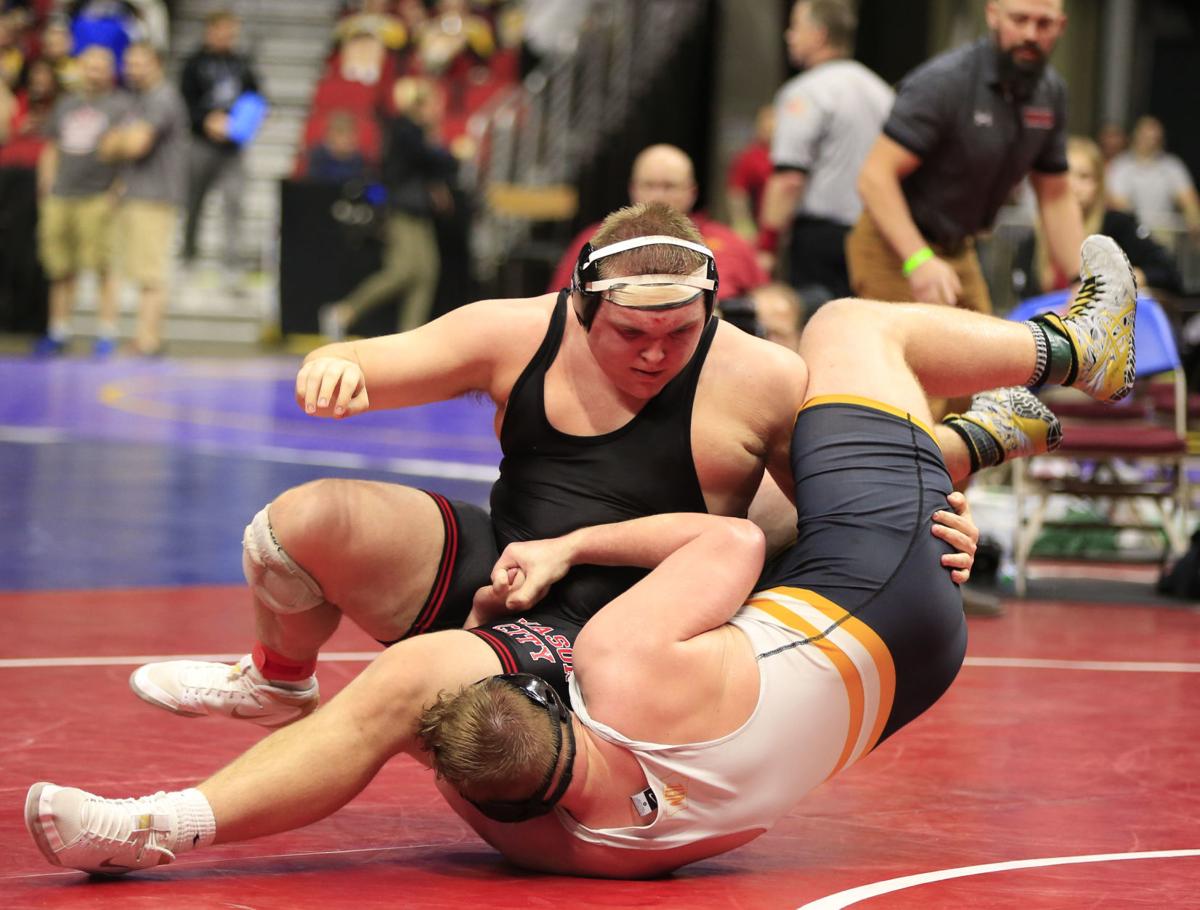 Andrew Snyder of Waverly-Shell Rock tries to turn on Troy Monahan of Mason City during their Class 3A semifinal at 285 pounds Friday. 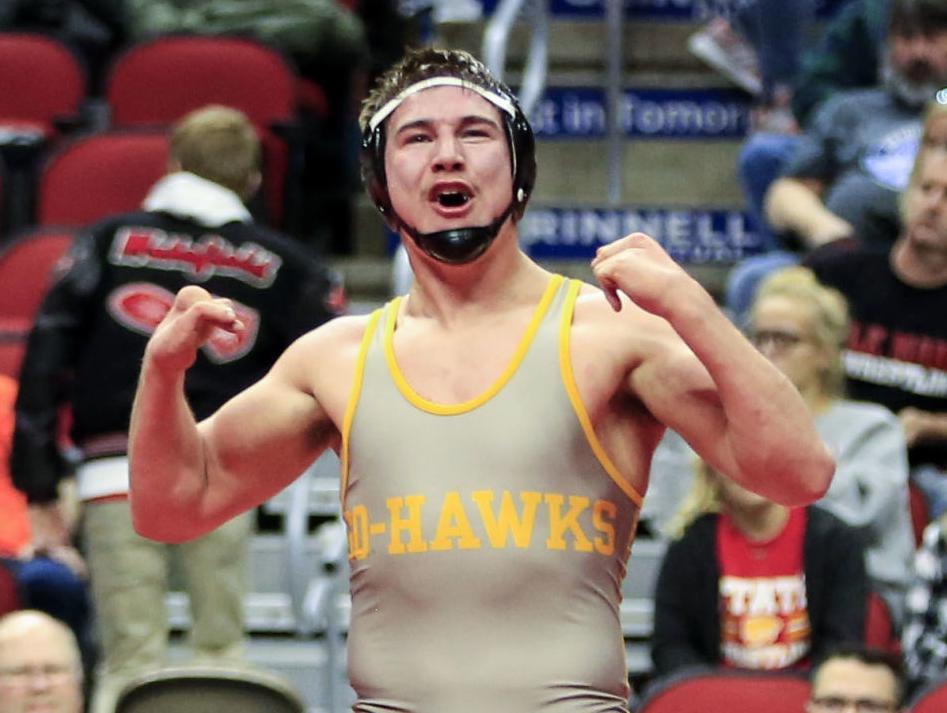 DES MOINES — Greed can be a good thing on a wrestling mat.

Waverly-Shell Rock piled up win after win Friday as the Go-Hawks seized control of the Class 3A team race at the Iowa state wrestling championships inside Wells Fargo Arena.

W-SR put three wrestlers into the finals — Jacob Herrmann at 160, Brayden Wolf at 195 and Andrew Snyder at 285 — and guaranteed six other medalists, including five with a chance to finish as high as third.

All that winning added up to 126 points, 18 more than top-ranked Southeast Polk with its four finalists and two wrestlers going for seventh place.

“We’re trying to be greedy because we are trying to win a state title,” Go-Hawks head coach Eric Whitcome said.

After leading the first round Thursday, W-SR continued to power along in Friday’s quarterfinal round and blood round where the nine Go-Hawks earned spots on the podium.

And even after disappointing losses, W-SR came back strong. The Go-Hawks scored 14 1/2 bonus points in back side victories.

“Every point is going to make a huge difference,” said Whitcome, who is trying to direct Waverly-Shell Rock to its sixth traditional state title and first since 2011. “Our coaches did a great job of getting our kids back into it and taking care of step No. 1, securing a medal.”

One of the big quarterfinal wins came at 138 where Ian Heise’s 3-1 decision over Southeast Polk’s Nathan Marchand was a big head-to-head win and reversed a loss to Marchand on Wednesday in the State Duals.

Heise scored a takedown 22 seconds into sudden victory to win 3-1.

In the semifinals, after freshman Aiden Riggins dropped a 12-6 decision to Trever Andersen of Ankeny at 106 and Heise fell short of Mason City’s Colby Schreiver 7-4, the Go-Hawks got big wins from Herrmann, Wolf and Snyder.

Herrmann used a takedown with 18 seconds left in the second period and held on to beat Western Dubuque’s Ryker Kurimski, 3-2.

“The first time I didn’t get to my attacks like I wanted to,” Herrmann said of his 5-4 win over Kurimski in December. “This time I got to them.”

Wolf gave up the first takedown to Cedar Rapids Prairie’s Ashton Stoner-DeGroot, but from that point on it was all Wolf, who rolled to an 11-3 major.

Wolf called the win gratifying because he had lost in the semifinals last February.

“I was perfectly capable of making it last year (to the finals), and just had a bad lapse,” Wolf said. “This year I was more comfortable going into it and just got the job done. Overall, I just wrestled super hard.”

Snyder continued a dream season that is the culmination of his hard work for three years. Two years ago, the then 212-pound heavyweight lost in the district semifinals. Then he didn’t make it last year.

It nearly didn’t happen as Snyder, who has not been taken down in a match all year, saw Monahan get to his legs, appear to be come through for a potential last-second score and win, only to see Snyder scramble supremely to hold on at the buzzer.

“I guess I’ve yet to be taken down this year, so I figured I probably shouldn’t let that happen in the semifinals of the state tournament. But, I also like to keep it interesting,” Snyder smiled.

Riggins, Bailey Roybal at 113, Dylan Albrecht at 126, Evan Yant at 132 and Heise at 138 all wrestled to place has high as third Saturday morning while Bryson Hervol went after seventh place.

If the Go-Hawks want to finish off the potential state championship, they know what they need to do.

Cedar Falls will return home with three medalists. Jakey Penrith, who will finish his career as a three-time state placewinner, had a chance to finish as high as third at 113.

Dakota Southworth at 170 and Collin Bohnenkamp at 220 wrestled for seventh place.

Andrew Snyder of Waverly-Shell Rock tries to turn on Troy Monahan of Mason City during their Class 3A semifinal at 285 pounds Friday.