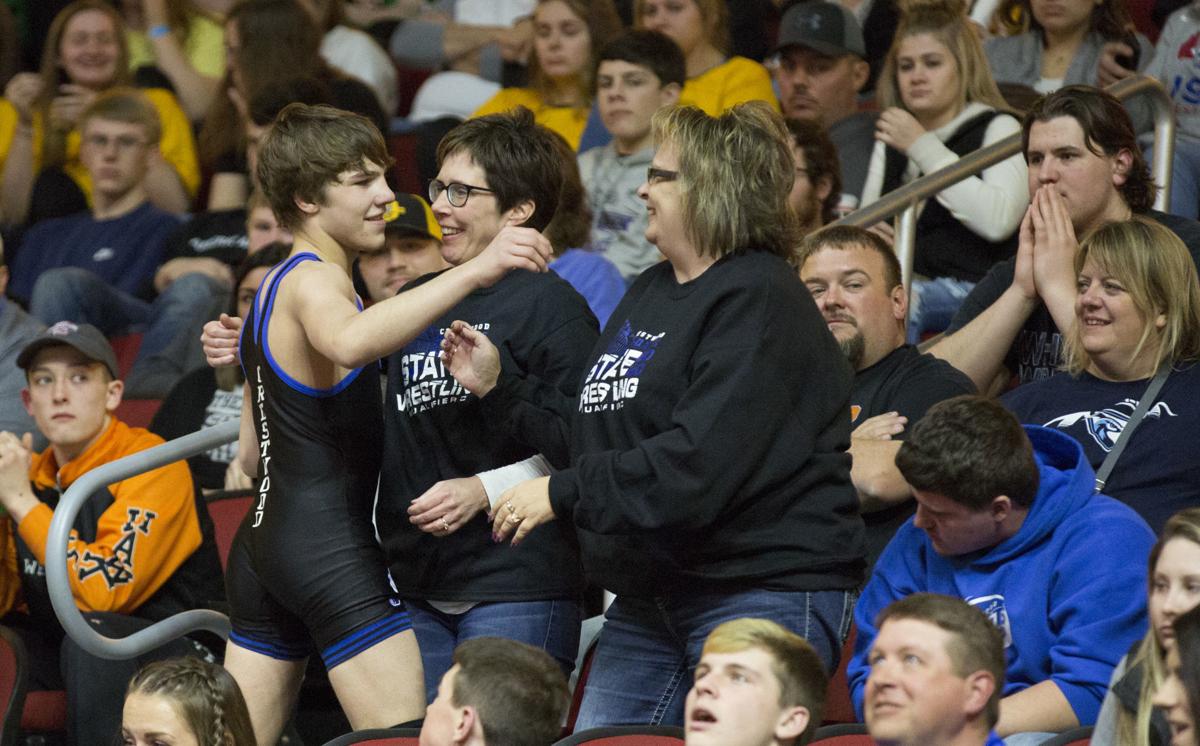 Crestwood's Carter Fousek runs into the stands to hug supporters after defeating Center Point-Urbana's Cole Whitehead for a Class 2A state title Saturday.

DES MOINES – Brent Jennings was stoic for the first 90 seconds of the interview. Then the moment caught up to him and he had to fight back the tears.

Jenning’s underdog Osage wrestling team shocked the state Saturday as the Green Devils captured their first state championship since 1981 by winning the Class 2A title at Wells Fargo Arena.

In his 24th season, Jennings who has coached multiple state dual qualifying teams and several state champion wrestlers, including his son, Brady, in 2015, was overwhelmed as coach after coach came up to congratulate him when victory was certain.

“It is big,” Jennings said. “It’s a great, great deal. It is something I have been waiting for a long time.”

In between the 1981 title and Saturday’s, Osage had finished second five times, most recently in 2002, and the program has 11 runner-up finishes altogether.

The Green Devils finished with 88 points. Union of La Porte City was second with 78 and Centerville third with 66.

“It is a big deal to finally bring it home to Osage. We have been close so many times even before I was coach,” Jennings continued. “Just a testament to these kids here that were wrestling. Nobody else believed and they did all year, especially when things started getting close that I wasn’t lying to them. They stepped up and did it and I’m just tickled to be part of it.”

The Green Devils entered Saturday’s finals with a 11-point lead and the only way runner-up was going to be able to catch them was for is finalists Lake Lebahn and Adam Ahrendsen to win by fall and both Osage finalists to lose.

When Lebahn lost his 132 final to Centerville’s Kayden Kauzlarich, 9-4, the Knights no longer could score enough points to surpass the Green Devils.

While there was some sting to the victory after disappointing losses by Nick Fox in the 120 final, 8-4, to Colby Lillegard of Bondurant-Farrar, and Spencer Mooberry to Jax Flynn of Solon, 8-4, in the 170 championship, the Green Devils understood they did something special.

Big enough that Abben believes the Osage fire department will be meeting the team when it comes home victorious Sunday morning.

The last time the Green Devils won they were led by current Waverly-Shell Rock assistant coach Mike Schwab, who won the 98-pound AA champion on the 81 team, and is the older brother of Osage four-time state champion, Mark, and current Northern Iowa head coach Doug Schwab.

“It is huge,” Schwab said. “Coach Jennings does stuff the right way. It’s awesome. I just talked to him and who would’ve thought Osage was going to win it but them. It’s great for coach. He has been there a long time and he does such a great job. I’m really happy for him and Osage, too.”

Abben’s performance was a key theme of Osage battling for everything they could get in the win. After losing at 132, Abben won four consolation matches, three by fall and another by major decision en route to finishing fifth. Joe Sullivan added a third at 126, and Zach Williams was fifth at 160.

Ryan Adams was a qualifier at 138.

“This tournament can go up and down pretty quick,” Jennings said. “Luckily things went our way this weekend, got a lot of big wins and we scored a lot of bonus points. Our kids fought to get bonus points and pretty exciting to be able to do it with six guys here.

“Just so excited to be part of something … special,” concluded Jennings as he began to fight the tears.

Union junior Adam Ahrendsen, a state runner up at 152 last year, moved up one spot on the podium with a hard-fought 1-0 victory over Independence’s Matthew Doyle in the 160 final. Ahrendsen had a quick escape in the second period for the only points, and then put a hard ride on Doyle in the third to capture the win.

“It’s the best. It feels so good. All the work I put in this summer paid off tonight,” Ahrendsen said.

For the second straight year, Independence’s Isaiah Weber lost in the finals to Matthew Lewis of Centerville. Last year, Lewis won the 113-pound title, and Saturday, Weber dropped a 6-0 decision to Lewis in the 126 final.

Crestwood of Cresco sophomore Carter Fousek waited little time to claim his second individual championship as he pinned Cole Whitehead of Center Point-Urbana in 1:40 to win at 113 one year after capturing a 106 title as a freshman.

“Amazing. Just as good as the last one. Winning is always amazing,” Fousek said.

New Hampton-Turkey Valley’s Evan Rosonke scored a big move early to take a 5-0 lead on Central Lyon’s Dylan Winkle in the 195 final, allowed Winkel to rally in the second to tie it 5-all, only to pull away in the third period for a 10-5 win.

“It is a really big deal to me,” said Rosonke who was sixth last year at 182. “It is unbelievable. It hasn’t fully set in yet. It is amazing. It is something I dreamed about for a long time.”

Crestwood's Carter Fousek runs into the stands to hug supporters after defeating Center Point-Urbana's Cole Whitehead for a Class 2A state title Saturday.