Saints vs. Buccaneers: Follow the latest scores and highlights from the NFL playoffs

Prep wrestling: SE Polk rallies to win battle of No. 1s
0 comments
Share this
{{featured_button_text}}
1 of 2 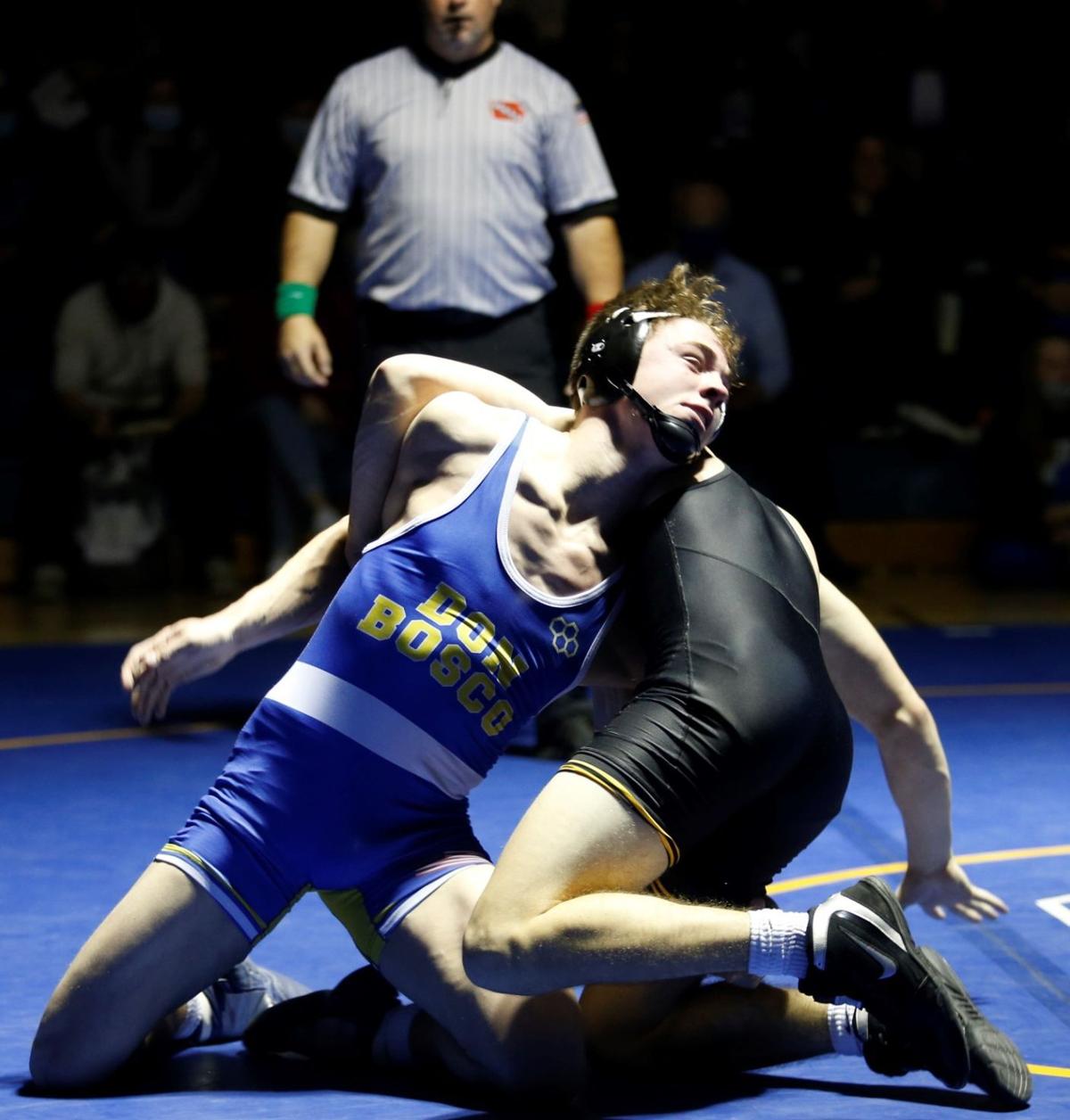 Don Bosco's Cael Frost tries to duck under the arms of Southeast Polk's Quentin Hill during their 160-pound match Saturday in Gilbertville. Frost won the match, 10-1, but the Rams won the dual, 34-33. 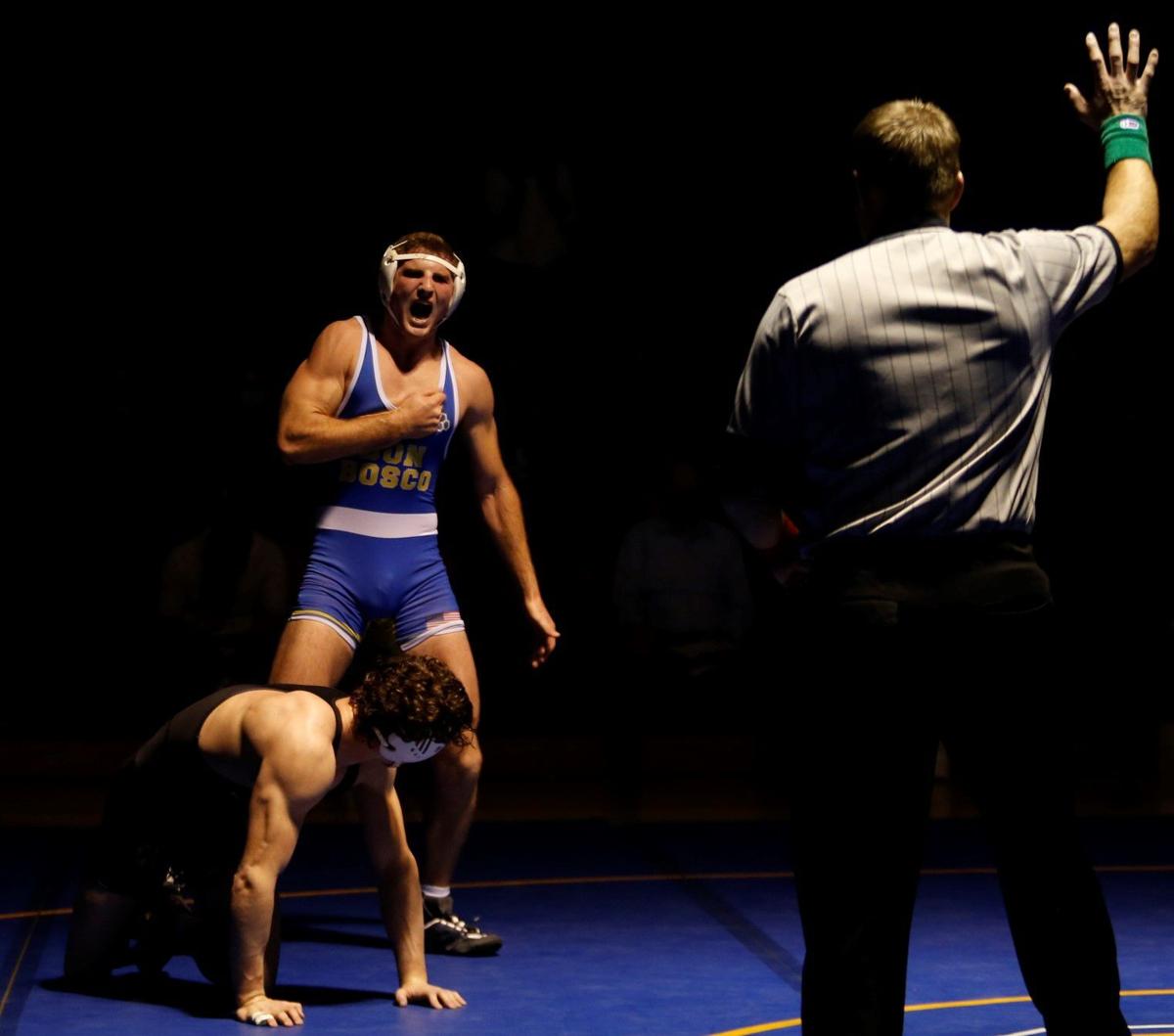 Don Bosco's Cade Tenold celebrates an 8-6 win over Southeast Polk's Andrew Reed at 170 pounds Saturday in a battle of top-ranked teams at Gilbertville.

GILBERTVILLE – It was only fitting that an entertaining night of wrestling came down to the final match.

“We had opportunities and we didn’t take advantage of some of the ones we were given,” Don Bosco coach Tom Hogan said. “They’re a good team and you can’t make mistakes against a good team. We can learn from this. It’s a great experience for us and we appreciate them coming up here to wrestle us.”

The dual meet more than lived up to its billing with Class 1A No. 1 Don Bosco battling 3A No. 1 Southeast Polk.

Each team won seven bouts with the Rams prevailing in the final three matches.

Don Bosco led 33-31 going into the bout between wrestlers both ranked second in their respective classes.

The 145 match was scoreless after one period before Jesuroga escaped, scored a takedown and then a rideout to lead 3-0 with two minutes left. Rahnavardi escaped to start the third period and then tried valiantly to score a match-tying takedown in the closing seconds.

“Cael was ready to go against a good wrestler,” Hogan said. “He just couldn’t get to his offense – give Jesuroga credit for keeping him from getting to it.”

Rahnavardi, a Northern Iowa commit, nearly spun behind Jesuroga’s hips in final seconds, but was unable to secure the TD.

“It was a great dual between two very good teams,” Southeast Polk coach Jake Agnitsch said. “I’m excited for our guys – they were super pumped about this dual. It was a great environment to wrestle in. Our guys wrestled hard and it came right down to the wire.”

Top-ranked Cade Tenold delivered a significant win early in the dual for the Dons. Tenold surrendered two first-period takedowns against sixth-ranked Andrew Reed, but came back strong at 170 pounds.

Tenold collected three takedowns in the final two periods, including the winning move near the edge of the mat with 22 seconds left. He prevailed, 8-6, pounding his chest twice as the Don Bosco fans erupted in cheers.

“That was a great battle against another tough opponent,” Hogan said. “You find out a lot in matches like that and it was a great test for Cade.”

“It’s a lot of fun to wrestle in big duals like this,” Carson Tenold said. “It just hurts a little bit to lose a close one like that. We had some very winnable matches. We have to learn from this moving forward. Every point matters. Until that six minutes is up, you need to be wrestling as hard as you can.”

Southeast Polk earned a pivotal win at 195 when Aiden Grimes, ranked sixth at 182, bumped up a class to face Cedric Yoder of Don Bosco. Yoder built an 8-0 lead midway through the second period before Grimes stormed back, locking up a cradle to earn a dramatic fall.

Top-ranked Kalob Runyon of Southeast Polk followed with a 9-0 win over No. 5 Jared Thiry of Don Bosco.

Sophomore Mack Ortner delivered a third-period fall for the Dons at 285. Teammate Caleb Coffin won by fall in 39 seconds at 106 to give his team a 25-16 lead.

The Rams responded with a fall by No. 1 Nate Jesuroga at 113.

Don Bosco came right back with No. 3 Garrett Funk topping No. 6 Cooper Hanson by major decision at 120. Funk launched Hanson with a spectacular third-period throw to finish off the impressive win.

The Dons earned another key win at 126 with freshman Kaiden Knaack prevailing by major decision over Jack Lewis.

Don Bosco senior Cael Frost, ranked No. 1 at 160, rolled to a win by major decision in the night’s second match.

“Overall, I’m not disappointed in the way we wrestled at all,” Hogan said. “A dual like this really helps us see where we are at against some real good competition.”

One hundred years ago today, Mason City High School was a part of sports history.

Don Bosco's Cael Frost tries to duck under the arms of Southeast Polk's Quentin Hill during their 160-pound match Saturday in Gilbertville. Frost won the match, 10-1, but the Rams won the dual, 34-33.

Don Bosco's Cade Tenold celebrates an 8-6 win over Southeast Polk's Andrew Reed at 170 pounds Saturday in a battle of top-ranked teams at Gilbertville.