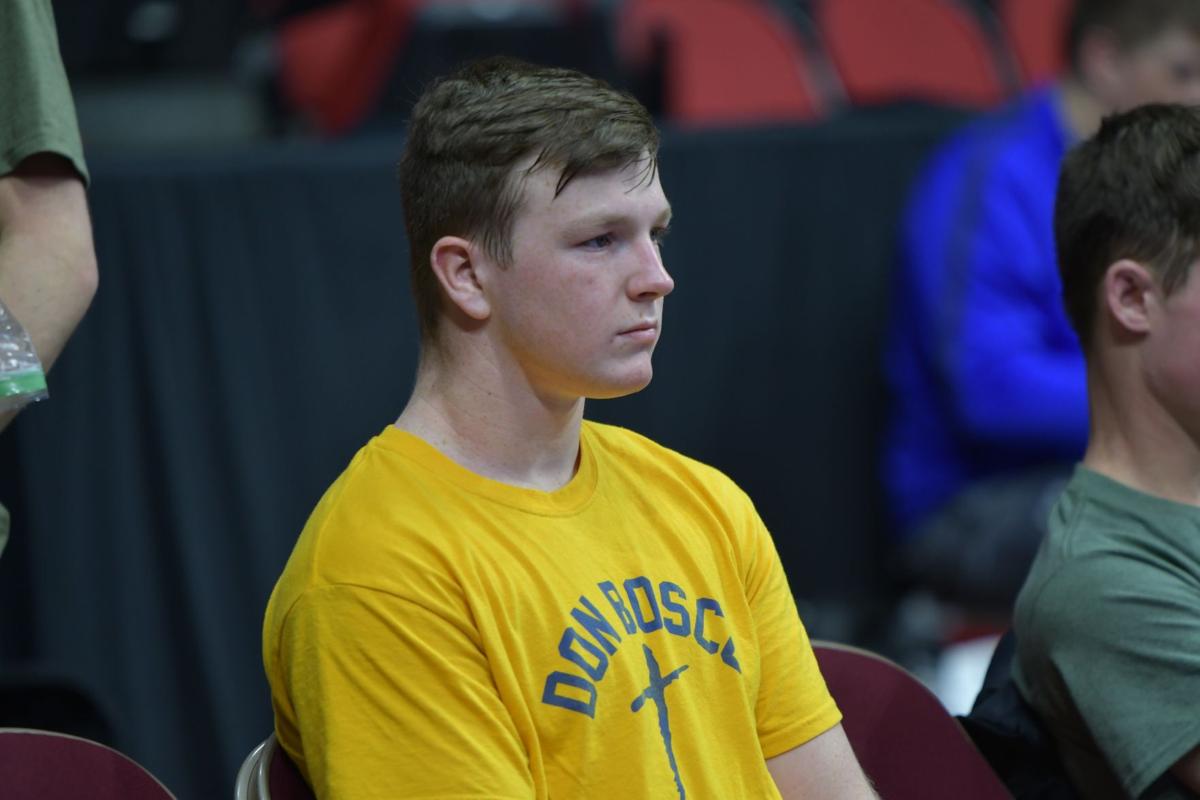 Don Bosco of Gilbertville's Charlie Hogan looks on during the Dons' Class 1A quarterfinal match with MFL Mar-Mac Wednesday at the Iowa state dual championships inside Wells Fargo Arena. Hogan won his match to improve to 16-3. 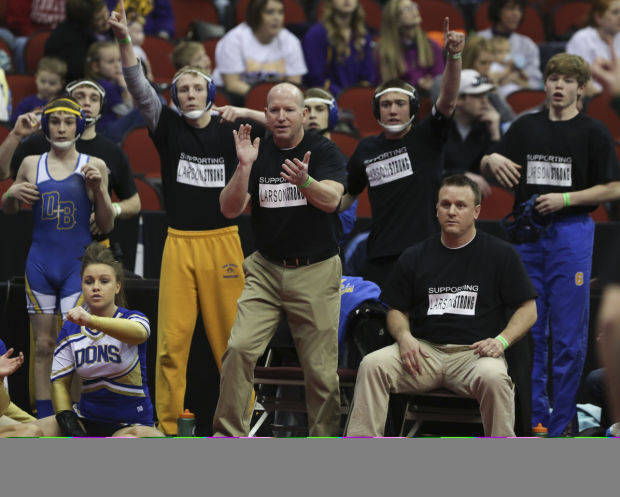 The Don Bosco corner, including coach Tom Hogan, react during the 2015 State Duals in Des Moines.

DES MOINES – Charlie Hogan has shared a lot of special moments with his dad, Tom.

He’s got to hug his dad after helping Don Bosco of Gilbertville win a state championship in football in 2019, and another embrace after his key hit helped the Dons win this past summer’s Class 1A state baseball championship.

After winning three traditional and two state dual championships in 10 seasons, Don Bosco head wrestling coach Tom Hogan has announced he will retire at the end of the 2020-21 season.

For Charlie it was the last match of his high school career. It was also one of the last times Charlie would see his father sitting in the coaches’ corner as Tom announced his retirement from coaching in late January after serving as the Dons head coach the past 11 seasons leading the program to a combined six state titles (dual and traditional) and more than 225 dual wins.

The night was made extra special when Don Bosco beat Lisbon, 34-25, to win the program’s 11th state dual title Wednesday and third in four years with Charlie contributing in each tournament championship.

“This is very special,” Charlie said. “If not for wrestling we wouldn’t have had as much time together. To get to slap his hand after winning a match…that is pretty cool.”

Tom, who has had two older children Jake, a two-time state medal winner for the Dons, and Lexie, a former wrestling manager, go through the program says the wrestling grind with Charlie has been a different experience.

Jake and Lexie were all about wrestling, according to Hogan, where Charlie on the other hand, liked wrestling, but was no consumed by it.

“I knew from a very early age that wrestling was not his favorite,” said Tom who was a Don Bosco state champion and Jim Miller’s first national champion at Wartburg College. “He never showed an interest in it as much as his brother, Jake did, when he was young. I knew he didn’t want to do it a lot of the time.”

But there is a moment of pride both Hogan’s have as the finish line nears on both their wrestling careers.

For Charlie, his victory helped lead Don Bosco back to the state dual championship finals for the 19th time, something the Dons have done in each of his four seasons on the team.

Don Bosco was wrestling Lisbon for the state title as this article went online.

“It’s a big deal to contribute to that,” Charlie said. “It has been fun being part of so many great teams, helping win that first dual championship as a freshman for dad.

“It’s big for our community, too.”

Tom is most proud of how Charlie stuck it out.

Charlie was never a varsity lineup regular, and although his heart most lies with the game of football, he stuck with wrestling. First off, it was to spend valuable time with his dad, but equally as important was being somebody that could sharpen his teammates.

And Hogan flourished in his final season posting a 16-3 overall mark for the Dons. With regular 195-pounder starter Cedric Yoder out at the beginning of the season, Hogan wrestled so well that the Predicament put them in their Top 10 rankings at 195.

“Wrestling makes our boys better men,” Hogan said. “What I’m most proud of him for is he stayed on the team and wrestled for his team. To me those kind of kids are what you need in a program. People talk about how we get kids who come here to wrestle, but the main secret is the kids who want to be part of the program but knew they’d never be the guy.

“Charlie was one of those kids. He could’ve easily hung it up after his freshman or sophomore season because the writing was on the wall with the Tenold twins (Cade and Carson), Cael Frost and Cedric Yoder all being right around his weight.

“But he stuck it out, persevered and that makes me a pretty happy dad.”

Don Bosco on a mission, produces dominate opening round

Tom Hogan, who retired after leading the Dons to the state dual and traditional championships last month, confirmed the news to the Courier Friday. Hogan also serves as Don Bosco's director of athletics.

Don Bosco of Gilbertville's Charlie Hogan looks on during the Dons' Class 1A quarterfinal match with MFL Mar-Mac Wednesday at the Iowa state dual championships inside Wells Fargo Arena. Hogan won his match to improve to 16-3.

The Don Bosco corner, including coach Tom Hogan, react during the 2015 State Duals in Des Moines.