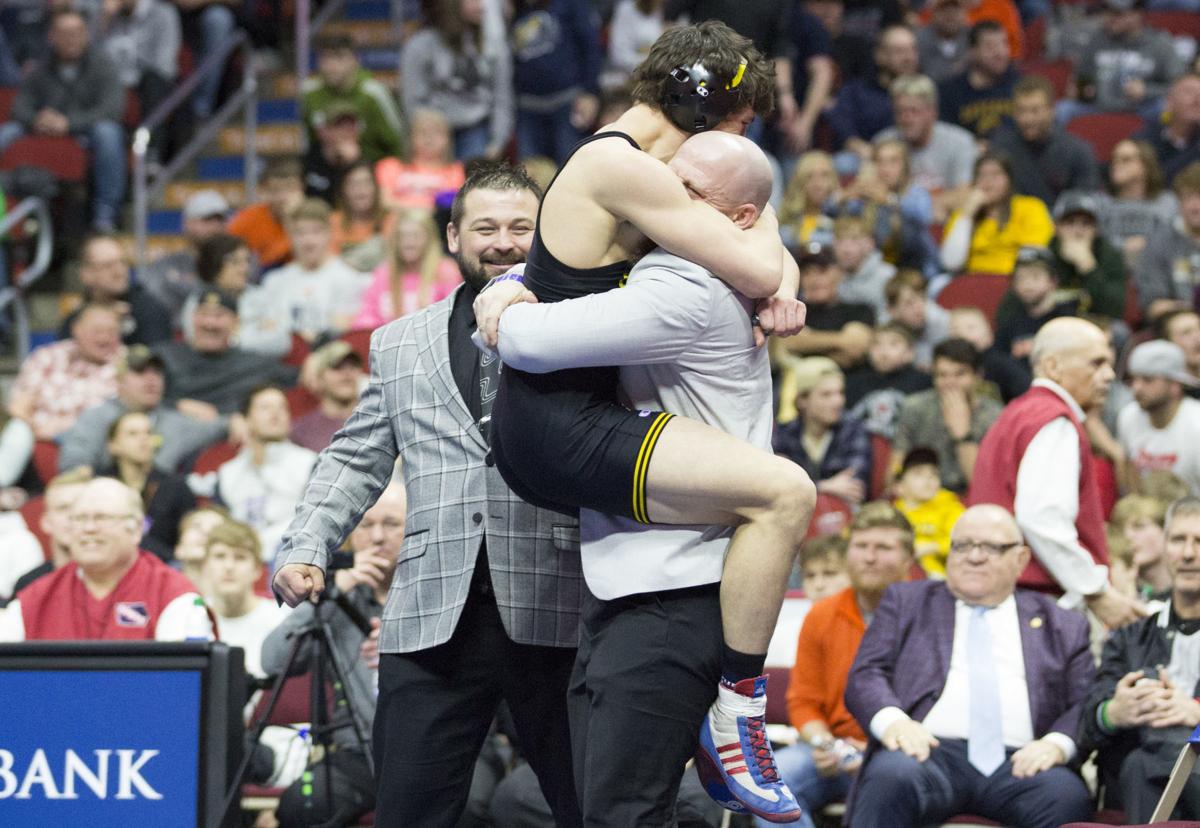 DES MOINES – The number seven is most identified with being lucky.

There was nothing lucky about the Waverly-Shell Rock wrestling team’s performance this weekend at the Class 3A state wrestling tournament inside Wells Fargo Arena.

Leading from start to finish for the second consecutive year, the Go-Hawks repeated as 3A state champions while winning the program’s seventh overall traditional state title.

Waverly-Shell Rock finished with 181 points, 40 better than SEP. Fort Dodge was third with 122.5

“It is huge winning two years in a row,” said Evan Yant, one of four Go-Hawks to win individual titles. “It means a lot to the fans and community of Waverly-Shell Rock and it is good to be back on top.”

With the gold trophy in hand, WSR put a shine on the performance with Ryder Block at 106, Bailey Roybal at 113, Yant at 152 and Brayden Wolf at 220 winning individual titles.

“These guys have had the same goal for a long time … coming off last year, they immediately said we want to go back and do it again,” WSR head coach Eric Whitcome said.

The dominating performance came after a crushing, 29-26 loss to SEP, in the 3A state dual championship on Wednesday.

“They were heartbroken, and it is amazing to see how quickly teenagers can gather their emotions and put their energy back into coming out in the toughest tournament of the year and competing the way that they did,” Whitcome added. “To be honest with you, I didn’t think the first round we looked great. We looked good enough to win. But we looked tight and tense, and after that our kids just rolled and looked great the entire tournament.

The Go-Hawks came out of the gates firing on Thursday recording seven falls and a major decision on day one to lead, on a day Whitcome described them as being tight and tense. The tournament was really where WSR won the tournament as it pushed seven wrestlers into the semifinals, four of them by fall and another by major decision and nine of them earning state medals.

Saturday evening’s finals were icing on the cake for the Go-Hawks and it started like has all year with the devastating one-two combo of Ryder Block and Bailey Roybal at 106 and 113.

Block used a reversal midway through the second period to take a 2-0 lead, and take down with 1 minute left to beat Brandon O’Brien of Linn-Mar, 4-0, to conclude a 44-0 freshman season.

Roybal, a junior committed to South Dakota State, followed with a 5-1 victory over Ryder Downey of Indianola to capture his first title. After a scoreless first and a strong ride in the second, Roybal reversed Downey to his back with 1:10 left in the third for all five of his points.

“Waverly has the best 1-2 punch in the state, possibly in the country me and Ryder Block,” Roybal said. “Every day we are working hard and getting it rolling for the team.”

At 152, Yant scored just 16 seconds into first period and held off a late take down attempt by Caleb Corbin of West Des Moines Valley to win a state title as a senior, 3-2. The win avenged a loss in the Keith Young finals to Corbin.

“I have been working my whole life for this. It has been my dream since I was little,” Yant said.

Wolf, a state runner-up a year ago, capped off the victory avenging a district finals loss with a 8-6 decision over Gage Linahon of Newton.

“Overall it was just grit,” Wolf said. “This is something I wanted to do since I was a little kid in kindergarten and started wrestling. I saw guys on TV wining state titles and I wanted to do it myself one day and here we are.”

In addition to the Walker’s each taking fifth, senior Carter Proffitt and freshman McCrae Hagarty each finished fourth at 160 and 170, respectively.

Cedar Falls had two medalists as Collin Bohnenkamp won his second medal, taking eighth at 195 a year after he took eighth at 220.

ORTNER HONORED: Prior to Saturday’s finals, Cedar Falls head coach Chris Ortner, in his second year at the helm of the Tigers, was named the Class 3A Coach of the Year by the Iowa Wrestling Officials and Coaches Association.

This honor comes on the heels of Ortner being named the Mississippi Valley Conference Coach of the Year.

Ortner and his staff led the Tigers to a 15-5 overall mark and a 7-0 mark in the MVC Mississippi Division.

“This is a reflection of our program,” Ortner said. “I don’t think it is about me. It’s never been about me. It is more about our kids and coaching staff. That is who I’m happy for. I’m honored and appreciated that other people think we are doing a good job.”

Independence’s Michael Doyle was named the 2A Coach of the Year.

HALL OF FAMERS: Two men associated with the Don Bosco of Gilbertville wrestling program were inducted into the IHSAA Wrestling Hall of Fame.

One of Kettman’s champions, Bart Reiter, joined him in the 2020 class. Reiter joined his brother Mack, as the first brother duo to be four-time champs. Reiter was also a member of four state dual and four traditional state championship teams.

Placing matches for third, fifth and seventh at the state wrestling tournament: