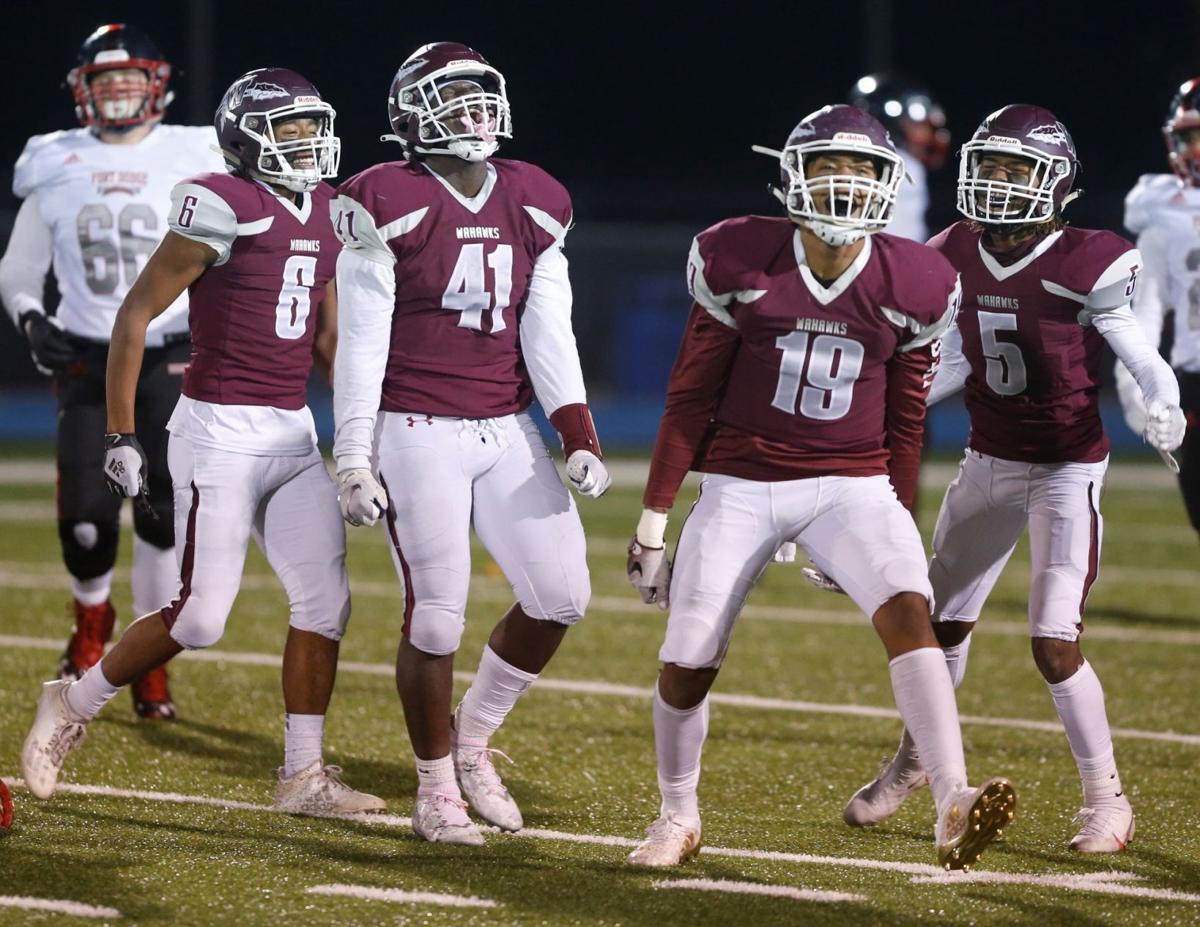 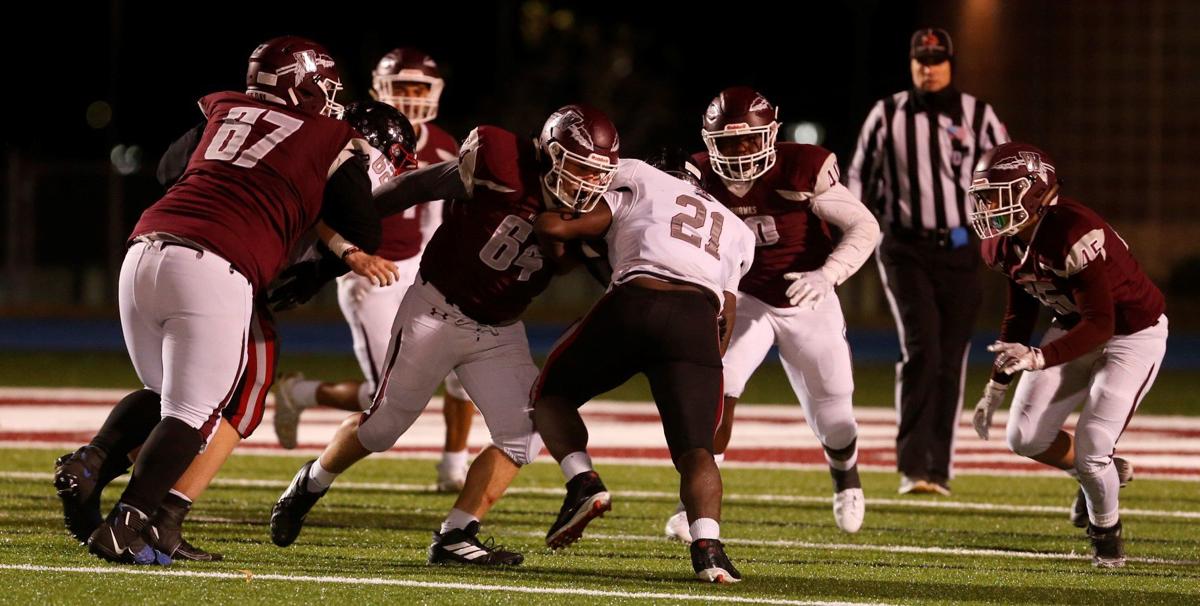 Waterloo West's Adam Teare wraps his arms around Fort Dodge's Dayson Clayton as teammates Nate Ewell (40) and Joesphy Hartley (45) close in to help in the second quarter of a Class 4A playoff game at Memorial Stadium. 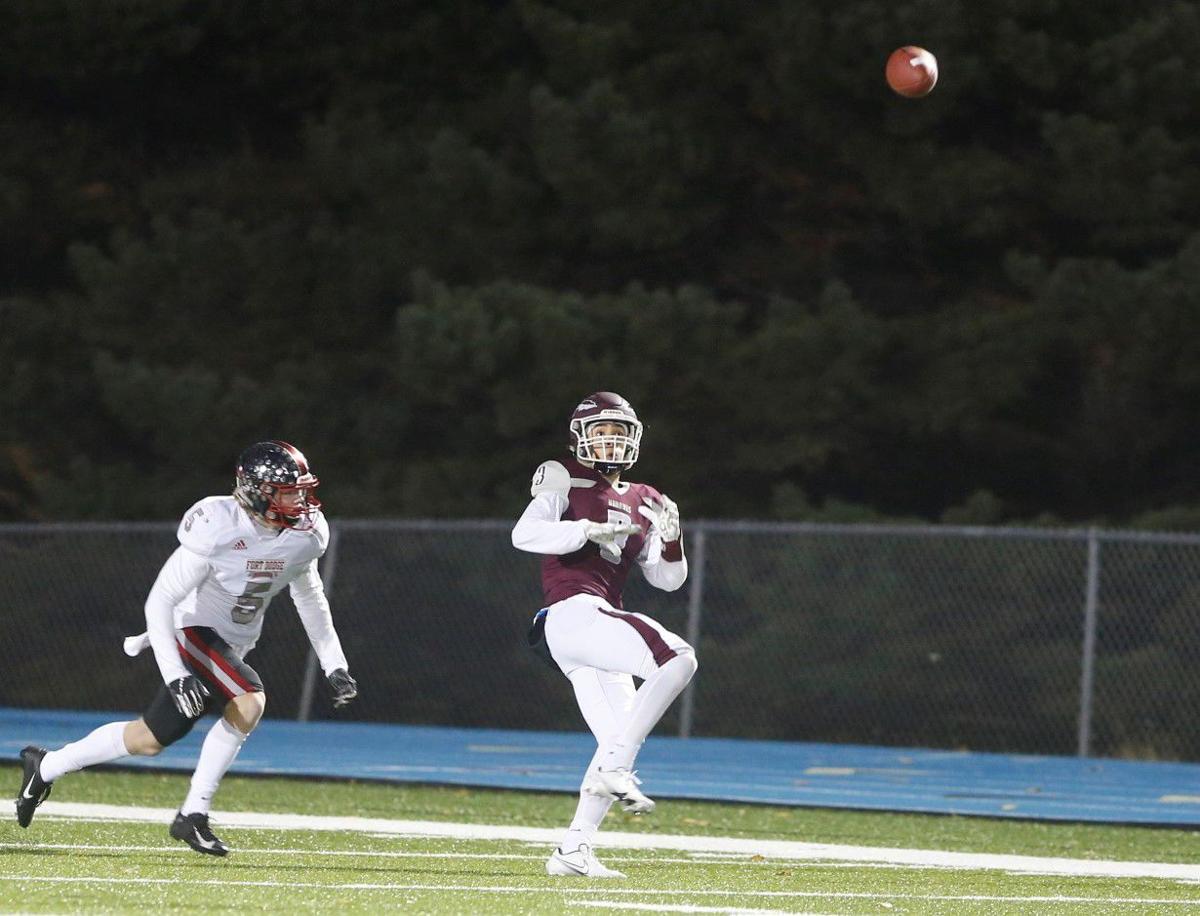 Waterloo West receiver Tay Norman (3) gets ready to haul in a second-quarter reception last Friday in a Class 4A playoff game at Memorial Stadium. 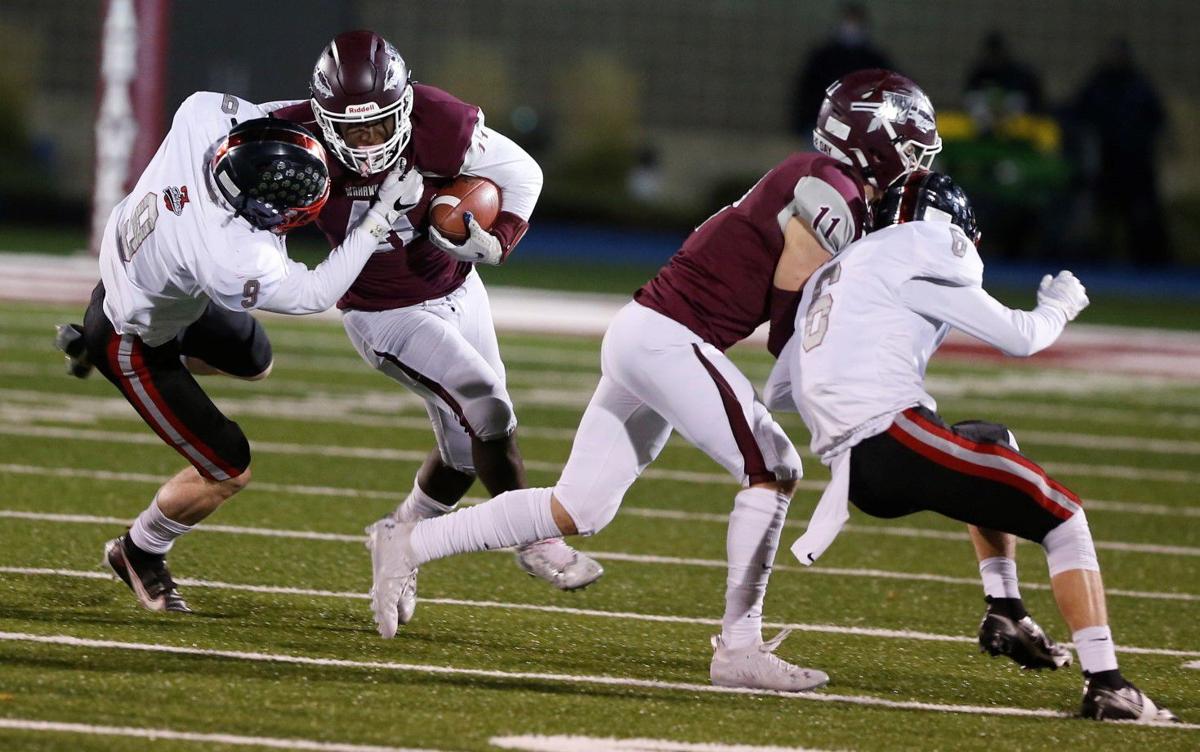 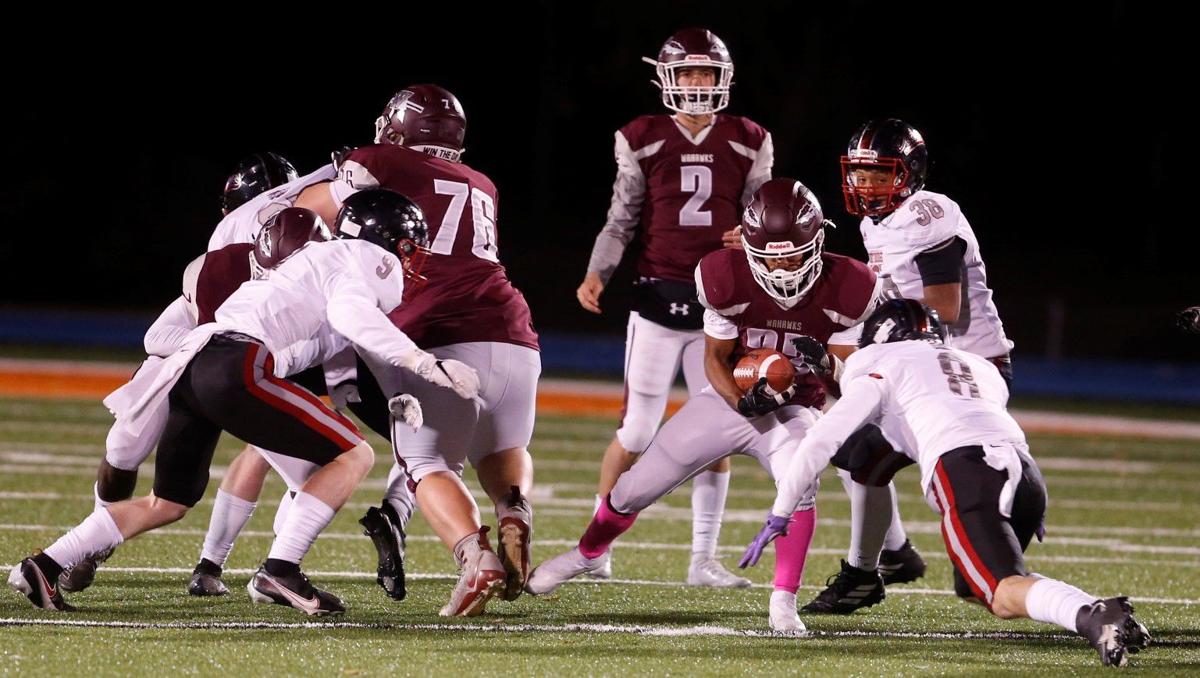 Waterloo West's Jay Shaw (22) looks to get past Fort Dodge defender Dylan Zimmerman (8) during first-quarter run Friday in a Class 4A playoff game at Memorial Stadium. 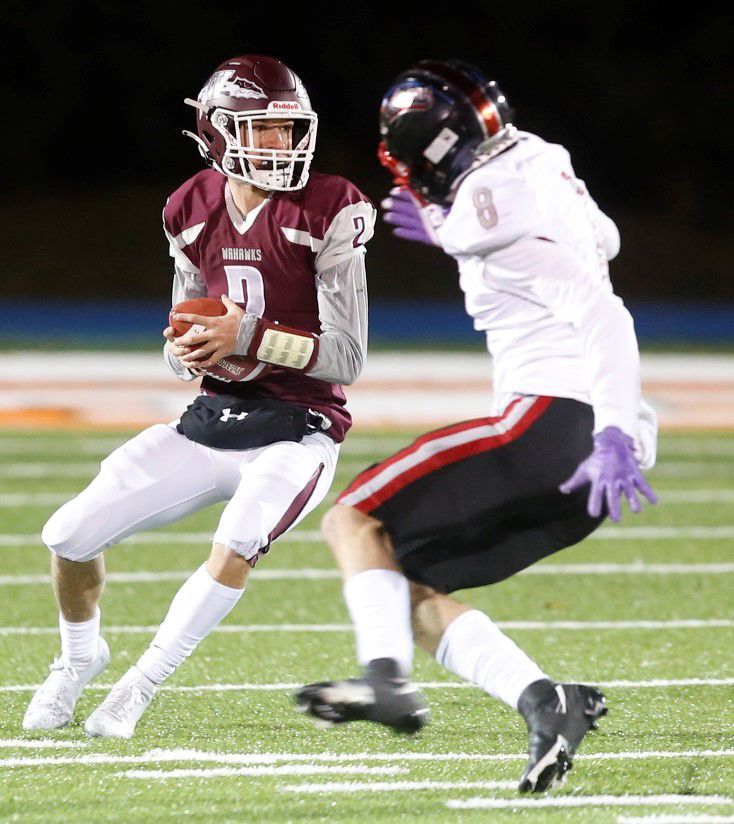 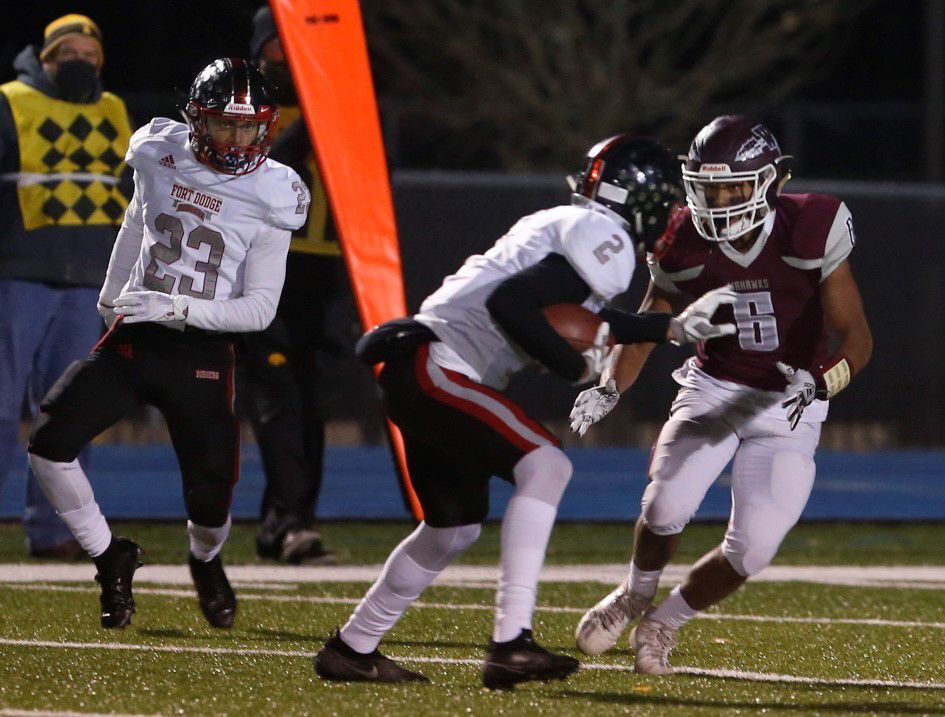 It just seemed that way.

Frustration turned to jubilation as the Wahawks stormed the field to celebrate their first playoff victory in 29 years.

West rallied in the second half before holding off Fort Dodge 24-17 in the second round of the Class 4A state playoffs Friday night at Memorial Stadium.

The Wahawks struck for 21 second-half points and now advance to next Friday’s Round of 16.

“We had two weeks to prepare for this game and our seniors did a really good job leading us,” West coach Lonnie Moore said. “We made a lot of mistakes in the first half, but our kids came back and played a great second half.”

“This was huge to get this win for our team, Coach Moore and for our school,” Schulte said. “We knew it had been a while since West had won a playoff game. We worked hard, locked in and were able to change that. We moved the ball well the whole game – we just finally put it all together in the second half. This is awesome to see everybody this excited.”

Trailing 10-3 at the half, the Wahawks continued to move the ball before finally cashing in with three touchdowns in the final two quarters.

Robinson powered into the end zone on a 6-yard run to tie the game 10-10 late in the third quarter. That capped a 14-play, 65-yard march that took nearly eight minutes.

Schulte followed by connecting on back-to-back scoring passes. He hit Nate Ewell on a middle screen that turned into a 50-yard score.

Following an interception by West’s Jeremiah Feahn, Schulte went deep on the next play. He fired a strike down the right sideline to Tay Norman for a 64-yard touchdown.

Norman finished with 133 yards receiving. His long TD catch gave the Wahawks a 24-10 lead early in the fourth quarter.

“Our offense was really balanced,” Moore said. “We threw the ball well and we also did an excellent job running the ball.”

Fort Dodge closed to 24-17 when Tyler Schreier scored on a 54-yard pass from Carson Petersen.

The Dodgers nearly tied it in the closing minutes, driving from their own 9-yard line to the West 8. Fort Dodge was then called for holding before a fourth-down pass by Peterson fell incomplete.

Schulte then took a knee on two straight plays as time ran out.

A wild scene followed with West players jumping up and down as they won their first postseason game since 1991. The Wahawks posed for a team photo on the field before players continued to stay on the field while exchanging hugs and high-fives.

“This is really big for our program,” Moore said. “I’m really excited for our players and our coaches. They worked hard for this.”

The first half was a back-and-forth battle between former Big Eight Conference rivals.

The Wahawks responded by driving 62 yards to the Dodger 5, but holding and unsportsmanlike conduct penalties prevented West from cashing in.

West drove deep into Fort Dodge territory three times in the second quarter, but came up empty each time.

The Wahawks had two first-half touchdowns taken off the board after they were flagged for penalties.

“It was definitely frustrating in the first half,” Schulte said. “But we felt good about how we were playing and we knew we could come back.”

West will likely be a significant underdog as it moves to the next round of the postseason.

“Everybody expected us to lose this game,” Schulte said. “But now we have another week. We are going to come back, practice hard all week and stay locked in.”

“Our seniors are not ready to be done,” Moore said. “This is a really good group and they really fought hard. We will come back to practice Monday and look forward to our next challenge.”

Complete second round playoff coverage along with pairings for the next two rounds. See pages D6-8.

Waterloo West's Adam Teare wraps his arms around Fort Dodge's Dayson Clayton as teammates Nate Ewell (40) and Joesphy Hartley (45) close in to help in the second quarter of a Class 4A playoff game at Memorial Stadium.

Waterloo West receiver Tay Norman (3) gets ready to haul in a second-quarter reception last Friday in a Class 4A playoff game at Memorial Stadium.

Waterloo West's Jay Shaw (22) looks to get past Fort Dodge defender Dylan Zimmerman (8) during first-quarter run Friday in a Class 4A playoff game at Memorial Stadium.