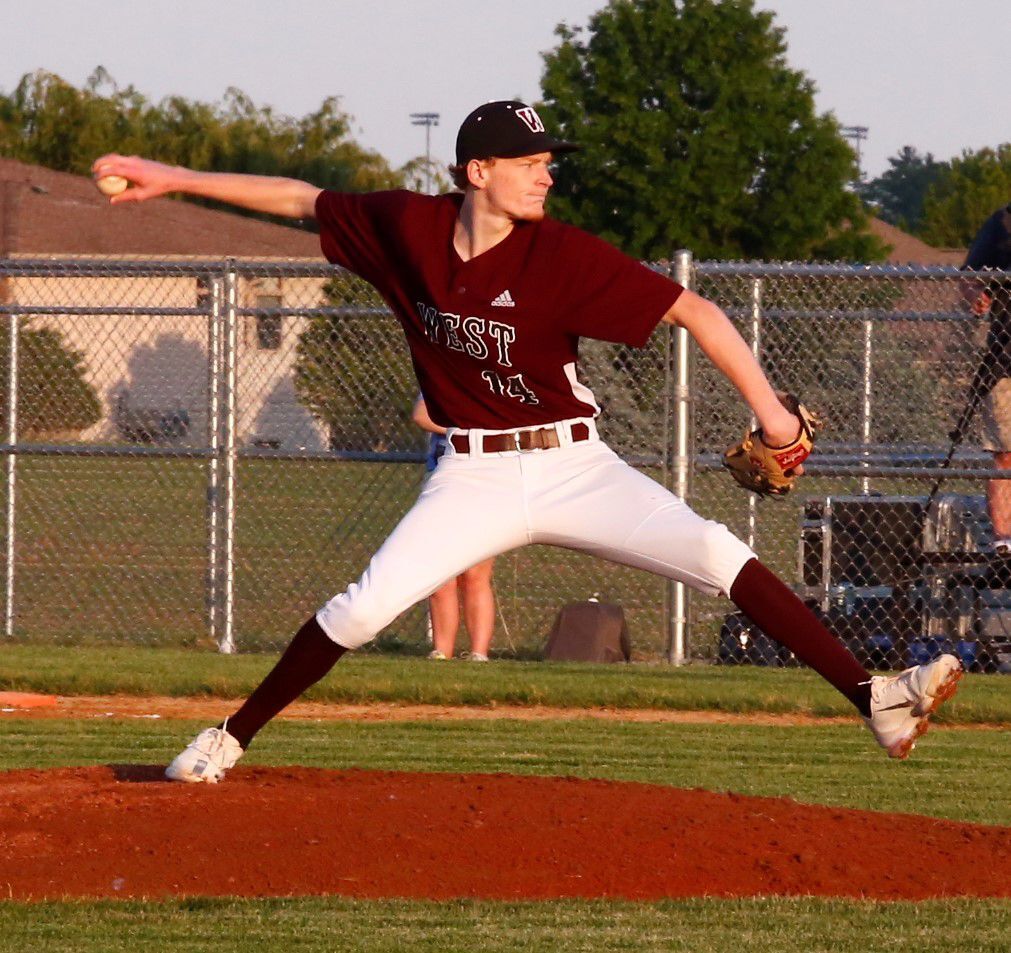 The Waterloo West bench celebrates a second-inning run during the Wahawks' 16-6 victory over Cedar Falls Wednesday at Robinson-Dresser Sports Complex. 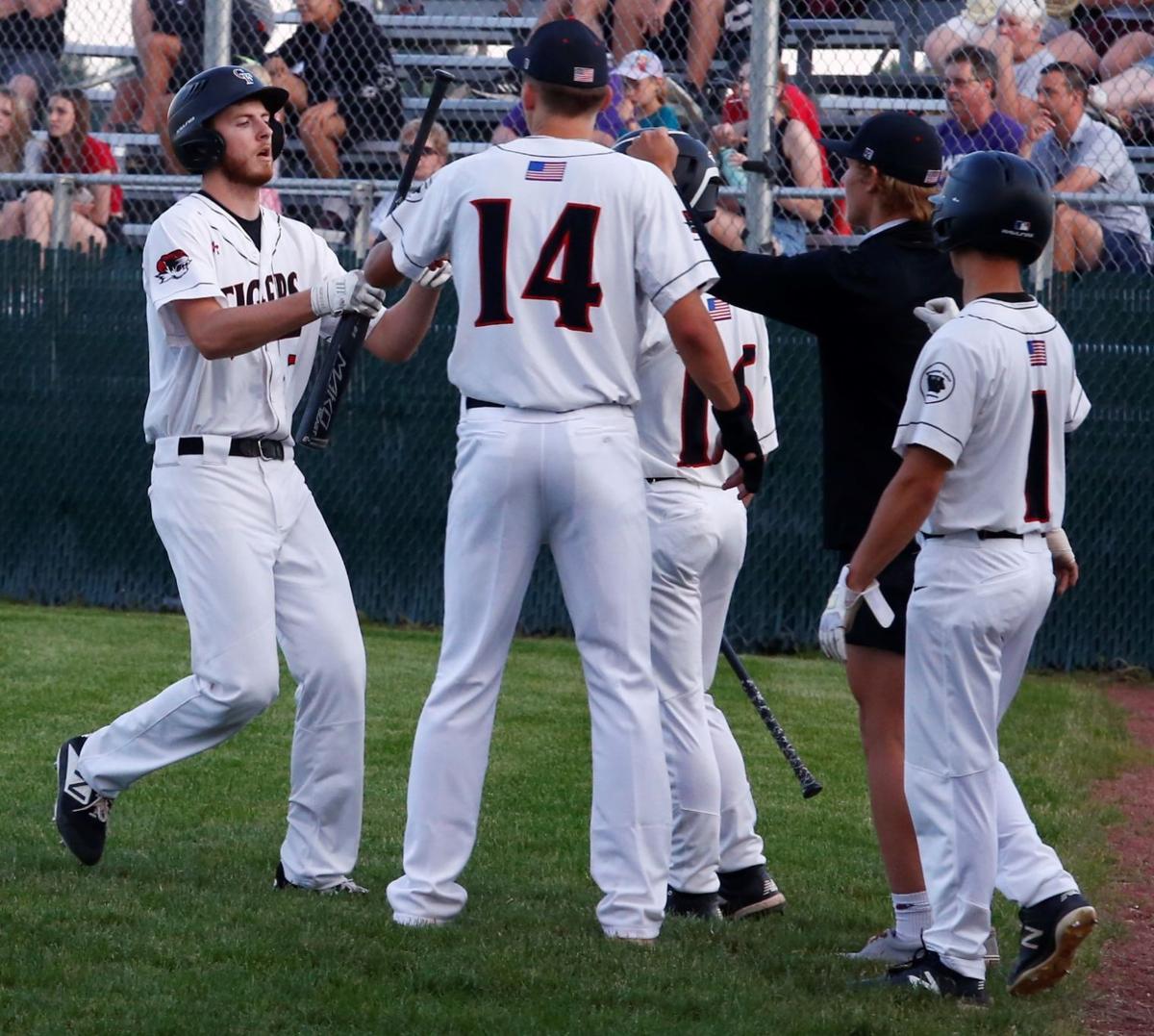 Cedar Falls' centerfielder Zach Neese is congratulated after his first inning sacrifice fly tied the Tigers' game with West at 1-all.

CEDAR FALLS – The Waterloo West baseball team is loaded with talent and experience.

The senior-laden Wahawks proved that with an impressive bounce-back performance against a top-notch opponent.

West erupted for 17 hits to spoil the home opener for Cedar Falls as the Wahawks rolled to a 16-6 victory Wednesday night at Robinson-Dresser Sports Complex.

The Wahawks improved to 3-1 while defeating the Tigers for the second time this season.

“This is a great rivalry and Cedar Falls has a very good team,” West coach Nate Lamphier said. “It was a great atmosphere for this game. Our senior leadership is really important for us and it showed in this game.”

West edged Cedar Falls 4-3 last week in the Metro tournament finals before the Tigers edged the Wahawks 9-8 on Tuesday night at West.

Starting pitcher Max Steinlage returned to the lineup for Cedar Falls after being sidelined with an injury. He started strong before running into trouble in the second inning.

The Tigers have been plagued by injuries this season.

“West had 17 base hits and did a good job putting the bat on the ball,” Cedar Falls coach Brett Williams said. “They’re a great team and we’ve known that. They were disciplined and it paid off for them. We fought and tried to get back in the game – we just couldn’t get that big hit we needed.”

The Wahawks broke the game open early, tacking five runs on the board in the top of the second inning. Dylan Alcorn delivered an RBI single to highlight the early outburst.

“He is like the guy in the major leagues who does everything really well,” Lamphier said. “He doesn’t have the power of some of the other guys, but he’s seeing the ball well and he’s starting to come around. He’s a good kid and he’s fundamentally sound at the plate and in the field.”

Melcher survived a shaky start on the mound to earn the win. He allowed three of the first four batters he faced to reach base. He pitched a scoreless second and third while the Wahawk offense provided him with a huge cushion.

“I started off a little rough and was just trying to find my command,” Melcher said. “I knew I had to go out there and throw strikes against a good Cedar Falls team. I knew if I did my job, we could beat them.

“Our offense did a great job giving me a big lead. We were so excited to get back on the field after losing to them. The sky’s the limit for this team. We have a chance to have a great season.”

Lamphier was impressed with Melcher’s start.

“We challenged Ben – we needed a big answer out of him,” Lamphier said. “We weren’t sharp at all (Tuesday) – I think we had 12 walks. Ben came through in a big way. That’s what seniors do. We really needed that.”

“Connor is a testament to hard work,” Williams said. “He was in the weight room all year and really made himself into a great player. It looks like he’s swinging at beach balls right now. Those were great swings.”

Support local journalism that you can't find anywhere else. For less than a stop at the coffee shop, you can buy a digital subscription -- $3 …

Support local journalism that you can't find anywhere else. For less than a cup of coffee, you can buy a digital subscription -- $5 for 5 mont…

The Waterloo West bench celebrates a second-inning run during the Wahawks' 16-6 victory over Cedar Falls Wednesday at Robinson-Dresser Sports Complex.

Cedar Falls' centerfielder Zach Neese is congratulated after his first inning sacrifice fly tied the Tigers' game with West at 1-all.