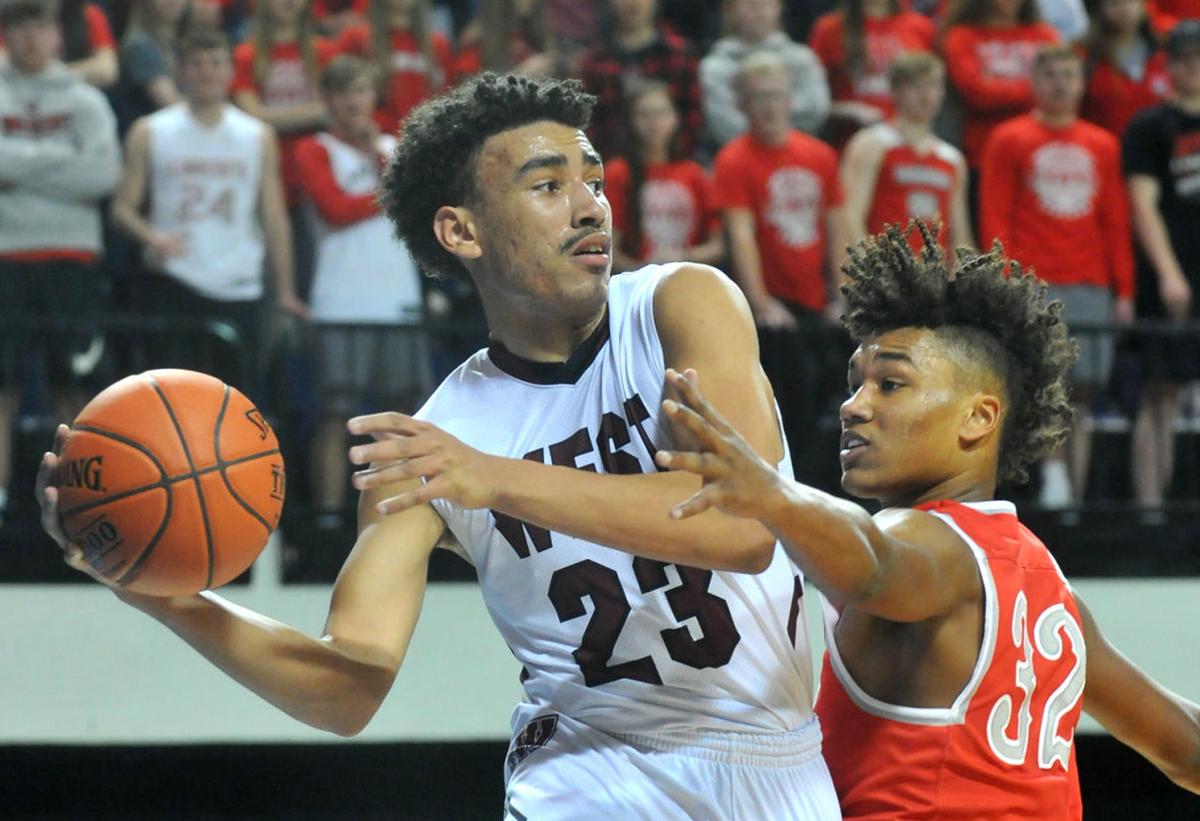 Waterloo West's Jaden Keller goes to the air to pass the ball around North Scott's Tytan Anderson in the first half of the Iowa Class 4A boys' substate final at the U.S. Cellular Center Tuesday in Cedar Rapids. 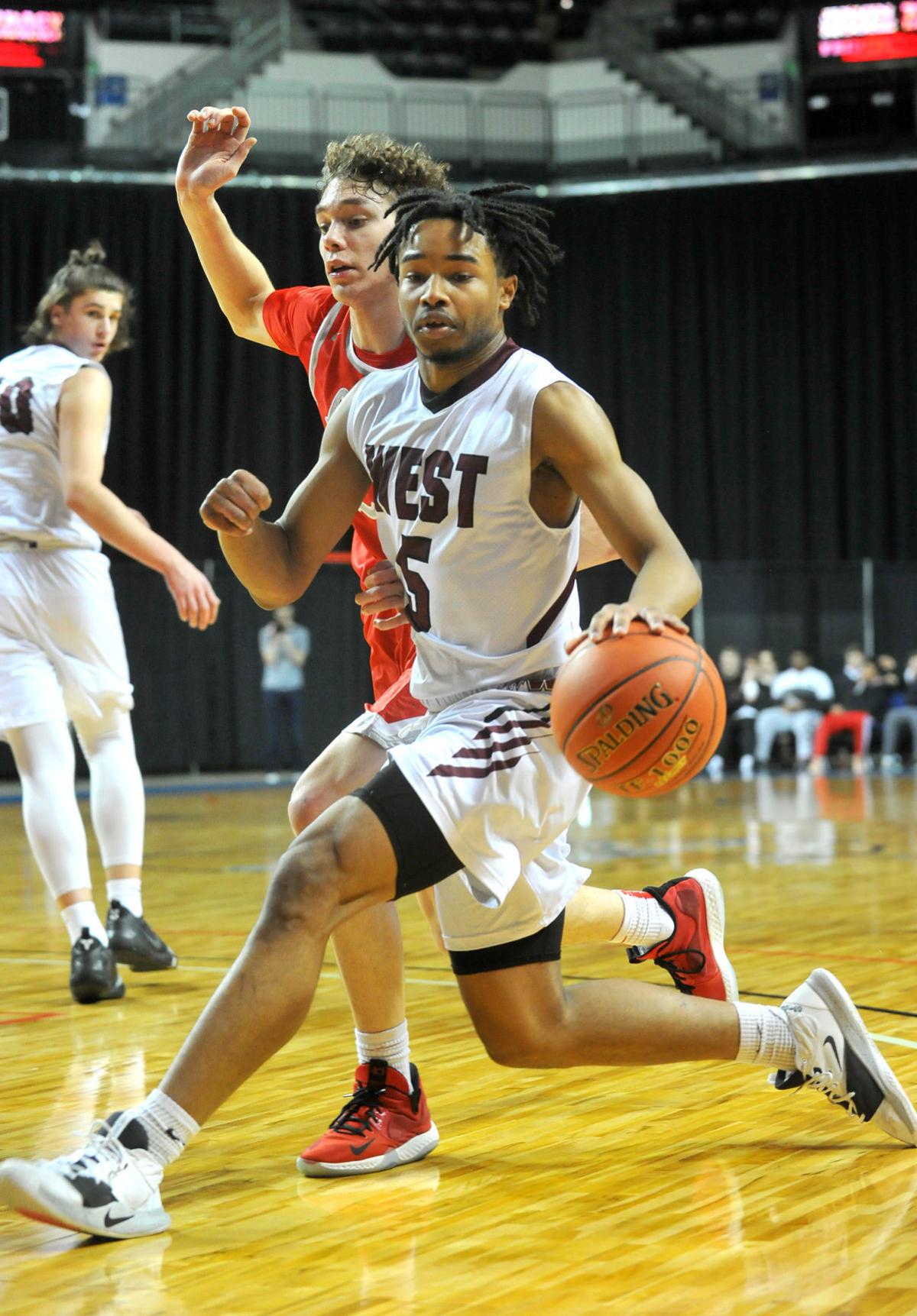 Waterloo West's Isaiah Johnson works the ball past North Scott's Landon Eiland in the first half Tuesday at the Iowa Class 4A boys substate final in Cedar Rapids.

WATERLOO – The uproar over Tuesday’s stunning last-second loss by Waterloo West to North Scott of Eldridge in a Class 4A substate semifinal at the U.S. Cellular Center has not died down.

An online petition at change.org is asking the Iowa High School Athletic Association to grant the West boys a spot in next week’s state tournament after a controversial ruling allowed a last-second shot by the Lancers to stand.

The third-ranked Wahawks took a 40-38 lead over the second-ranked Lancers with .6 seconds left when DaQuavion Walker hit a jumper from the right elbow.

After a pair of timeouts, University of Northern Iowa commit Tytan Anderson fielded a three-quarter court pass, turned, elevated and swished a game-winning 3-point basket as the final buzzer sounded to lift North Scott to a 41-40 win.

One official immediately signaled the basket was good, and after all three officials met at midcourt the call stood. North Scott celebrated as West players dropped to the floor in heartbreak.

Video and still pictures show the ball still in Anderson’s hands when the clock hit 0.0 on the scoreboard. That is the impetus behind the online petition.

Part of it reads:

However, there is numerous video and photo evidence indicating that the player did not release the ball before the buzzer. In the videos you can also see that the clock, buzzer and backboard lights were not in sync, not allowing the referees to make an accurate assessment.

Looking to make their first appearance at the state tournament since 1994, the Wahawks were devastated, the hurt illustrated by head coach Cliff Berinobis’ post-game comments.

“At the end of the day, you’ve got kids in here (the Wahawk lockerroom) and you robbed them,” Berinobis told The Courier. “Everybody in this building knows it, including the North Scott fans.

“Common sense would tell you that on the catch, out away from the basket, he turns and shoots ... it’s not humanly possible. I don’t want to discredit them, but that shot shouldn’t count, and everybody knows it.

“They’re heartbroken. For four years they changed the culture at West High for this moment.”

The videos show the ball in the air and at its apex when the backboard lights came on and the buzzer sounds despite the fact that scoreboard clocks were already at 0.0.

In an off-the-record conversation, an IHSAA representative said there is no rule in place allowing the association to review video and change the ruling from Tuesday.

The link to read the full petition is https://www.change.org/p/iowa-high-school-athletic-association-ihsaa-grant-waterloo-west-boys-basketball-a-ticket-to-the-state-tournament-1b9c3f2d-468e-43a1-a536-2414e2a51423?recruiter=357076096&recruited_by_id=edf85cb0-3ca7-11e5-b8b7-ff2db4fee68e&utm_source=share_petition&utm_medium=copylink&utm_campaign=petition_dashboard

Cedar Falls earned a chance to play for a third straight title Tuesday night with a win over Dubuque Hempstead.

With six-tenths of a second on the clock, North Scott's Tytan Anderson fielded a three-quarter court pass, turned, elevated and swished a game-winning 3-point basket.

No. 5 ranked Waterloo West takes on No. 1 ranked Waukee in the Class 5A semifinals of girls' state basketball at 11:45 a.m. Thursday, March 5.

Waterloo West's Jaden Keller goes to the air to pass the ball around North Scott's Tytan Anderson in the first half of the Iowa Class 4A boys' substate final at the U.S. Cellular Center Tuesday in Cedar Rapids.

Waterloo West's Isaiah Johnson works the ball past North Scott's Landon Eiland in the first half Tuesday at the Iowa Class 4A boys substate final in Cedar Rapids.