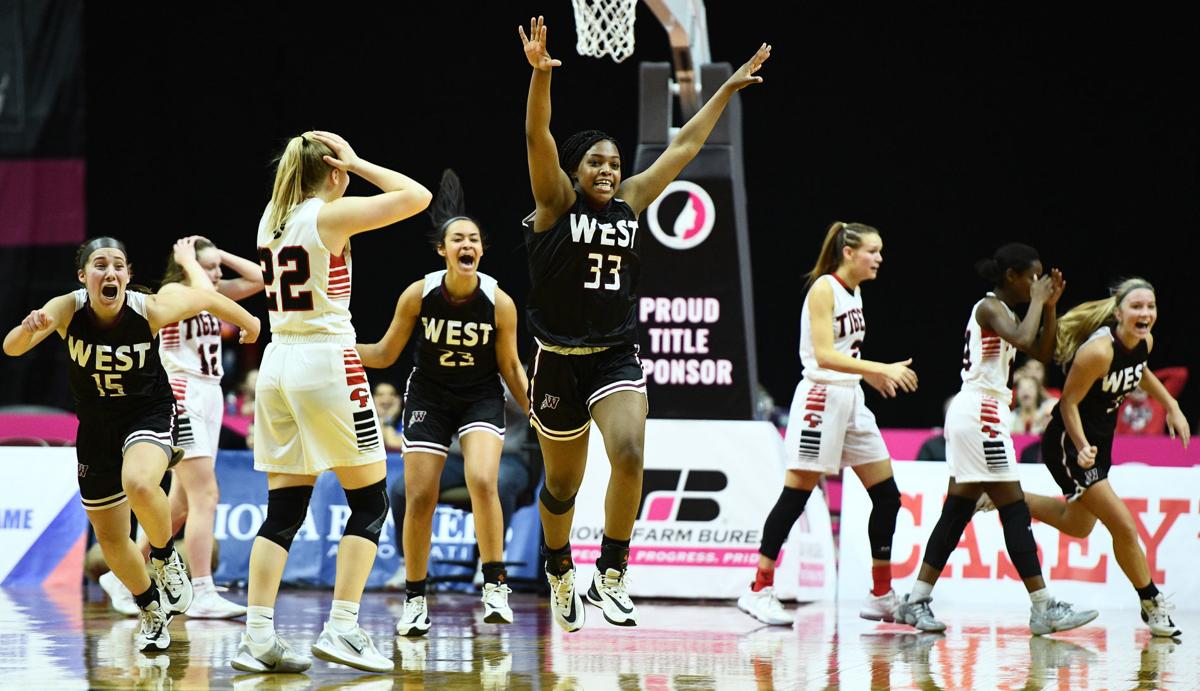 Waterloo West's Sahara Williams (33) and the rest of the Wahawks celebrate their last-minute 51-49 win over Cedar Falls in Class 5A first-round action of the Iowa state basketball championships played Monday at the Wells Fargo Arena in Des Moines. 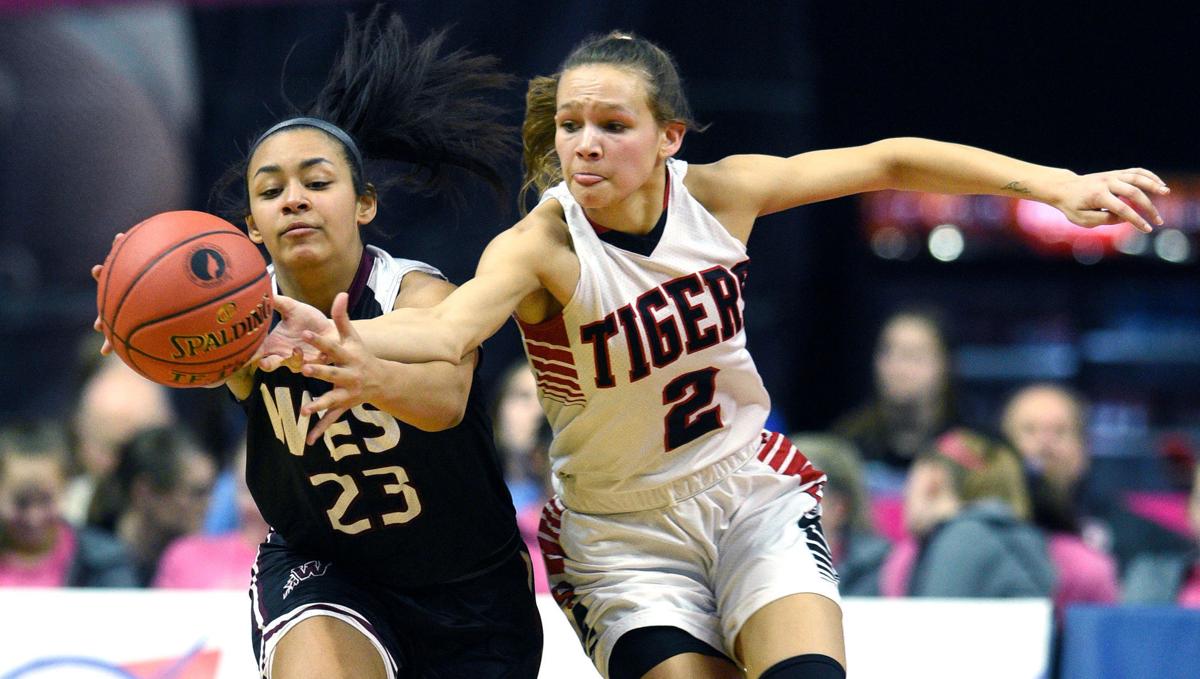 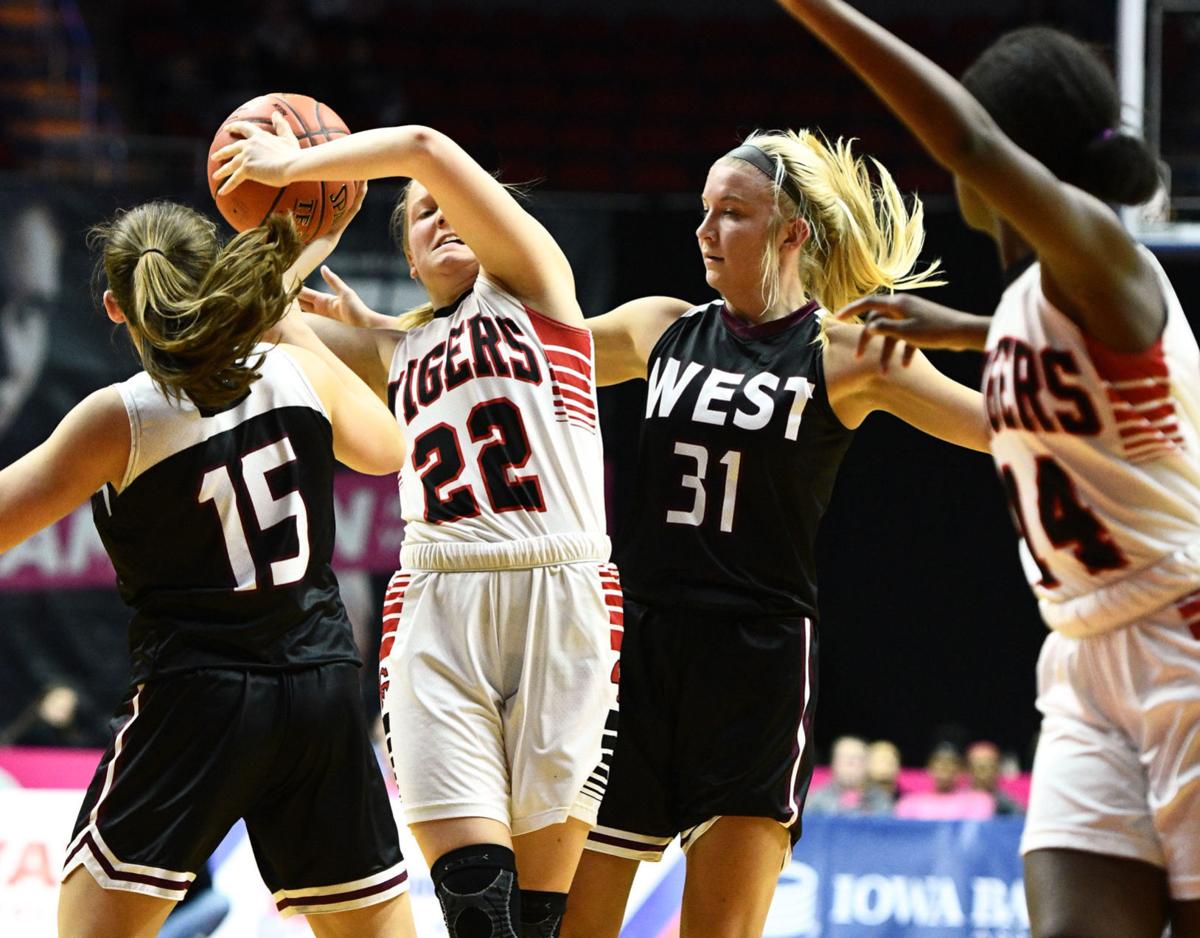 Cedar Falls' Lexie Godfrey (22) tries to pass to Cedar Falls' Jasmine Barney, far right, while being pressured by Waterloo West's Halli Poock (15) and Lauren Conrey Monday in the quarterfinal round of the Class 5A state tournament. 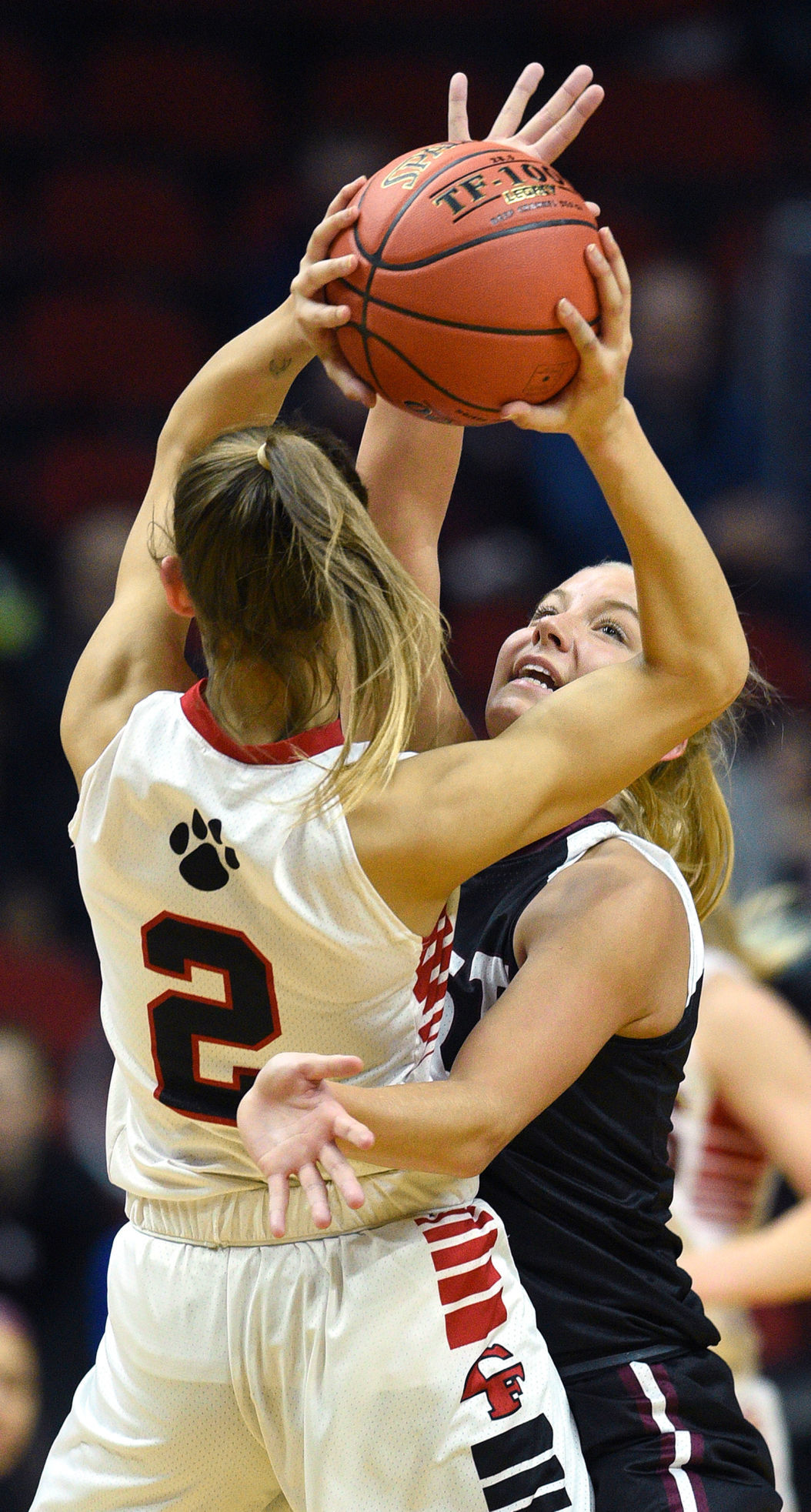 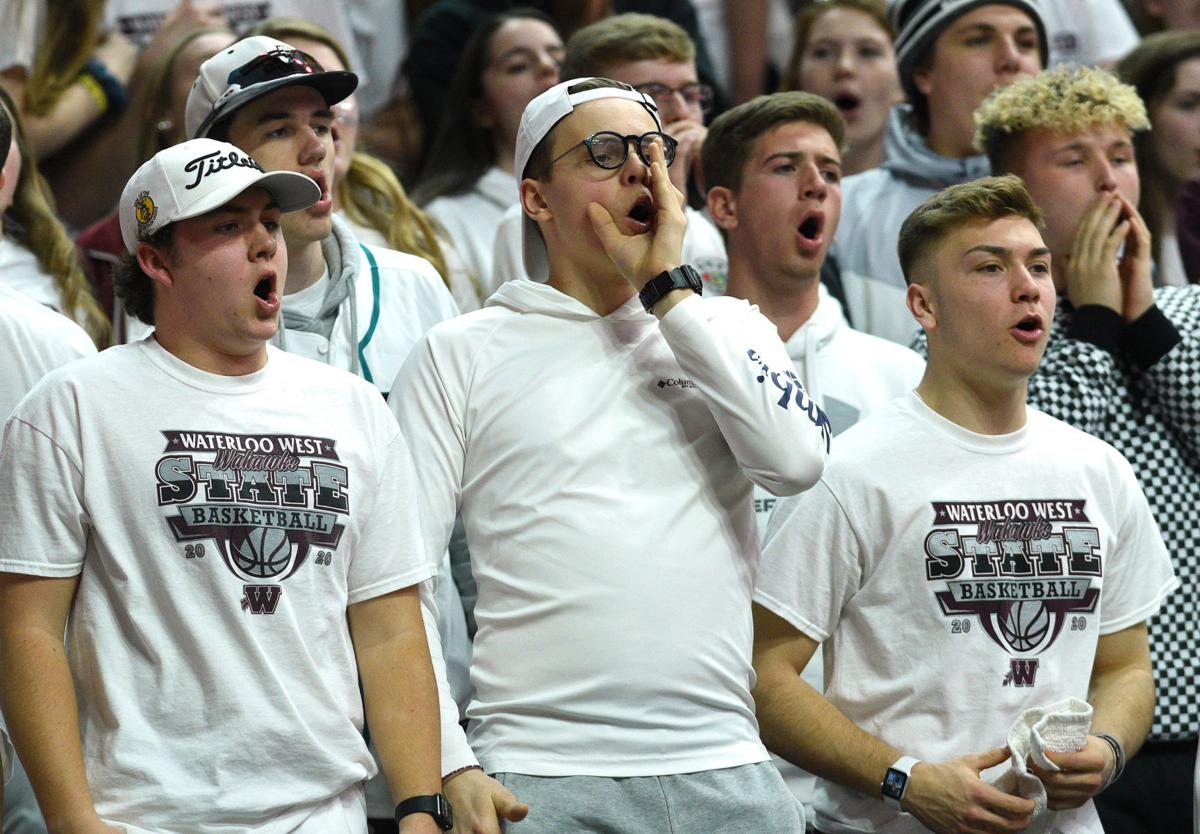 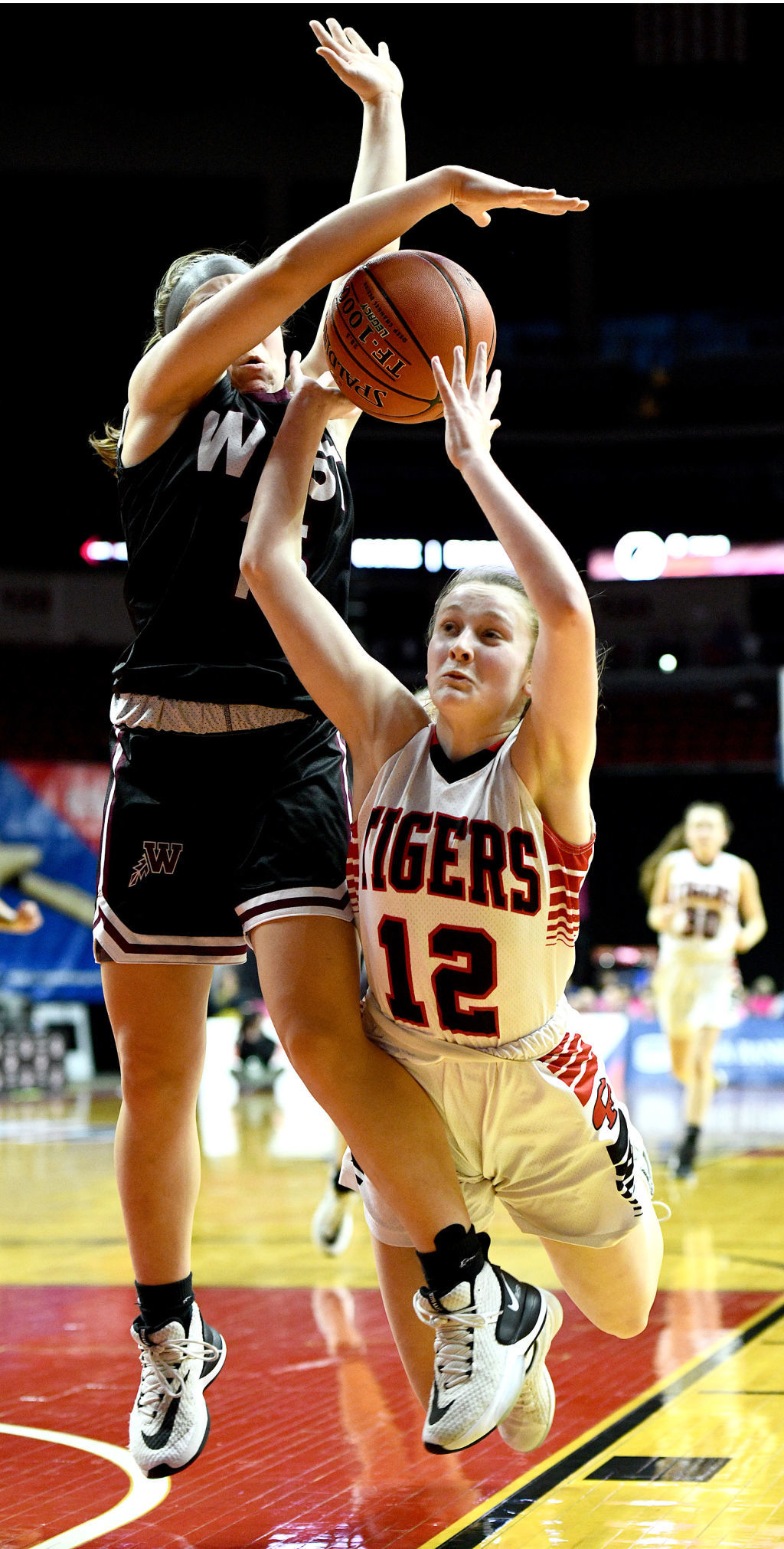 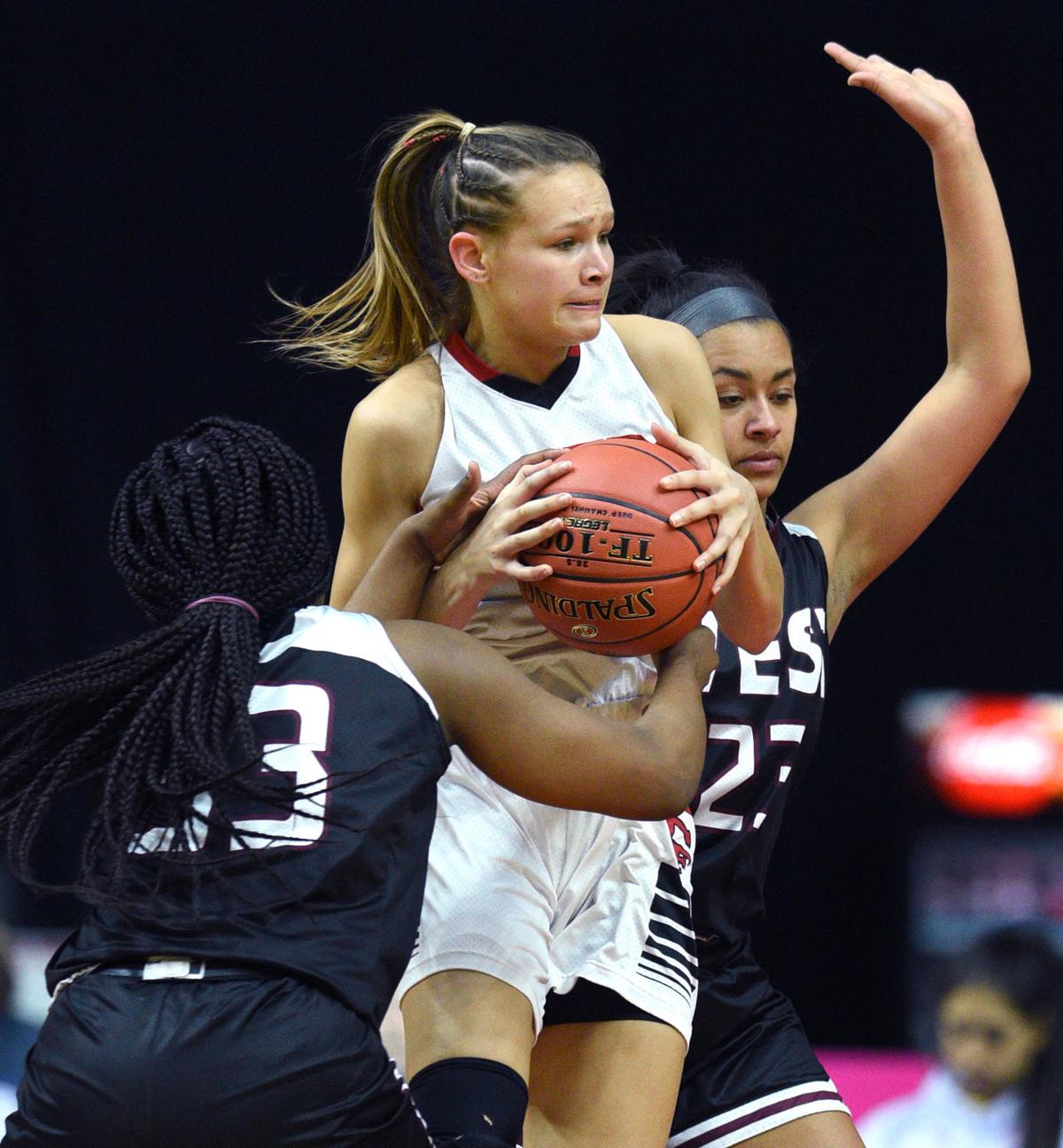 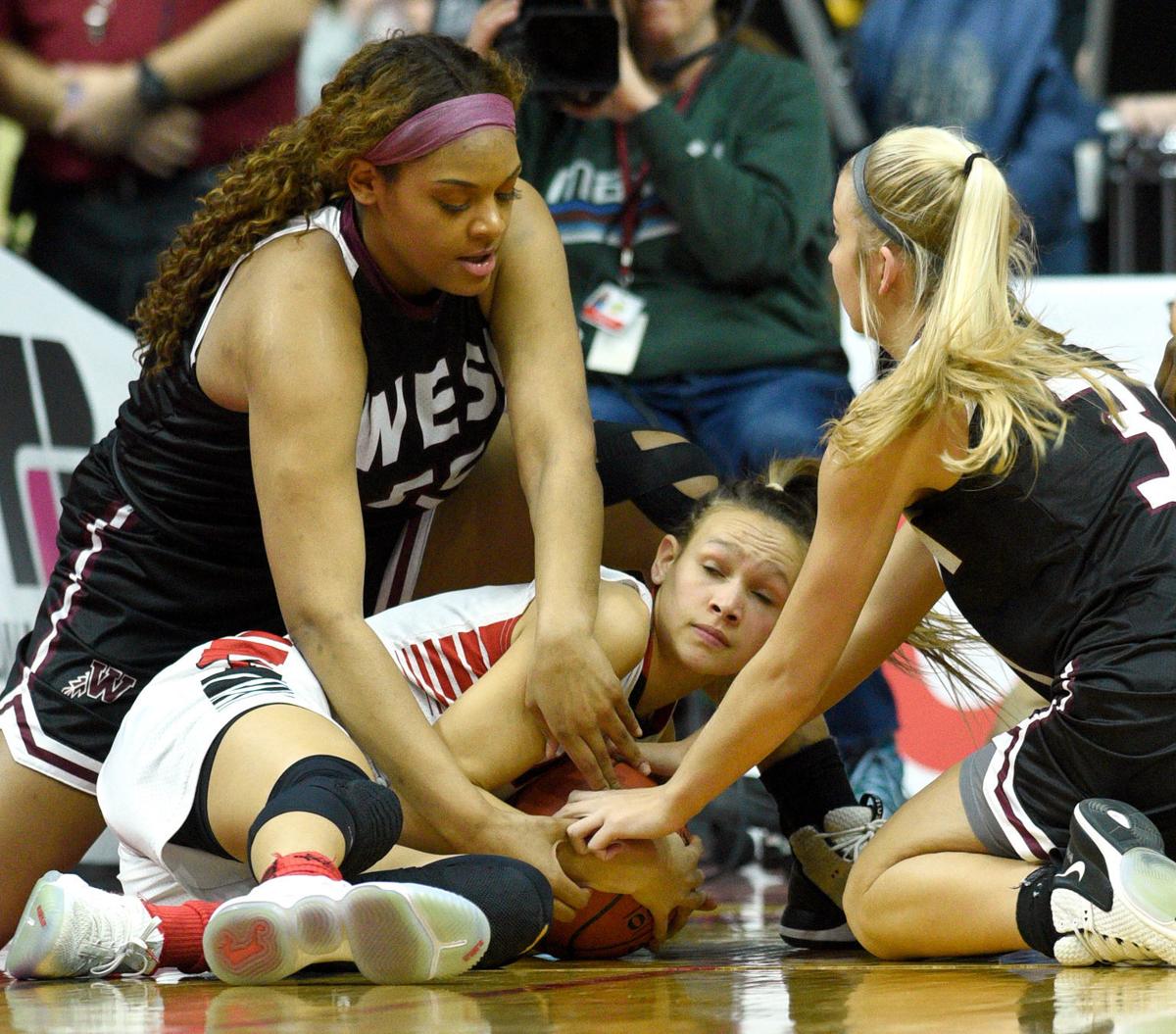 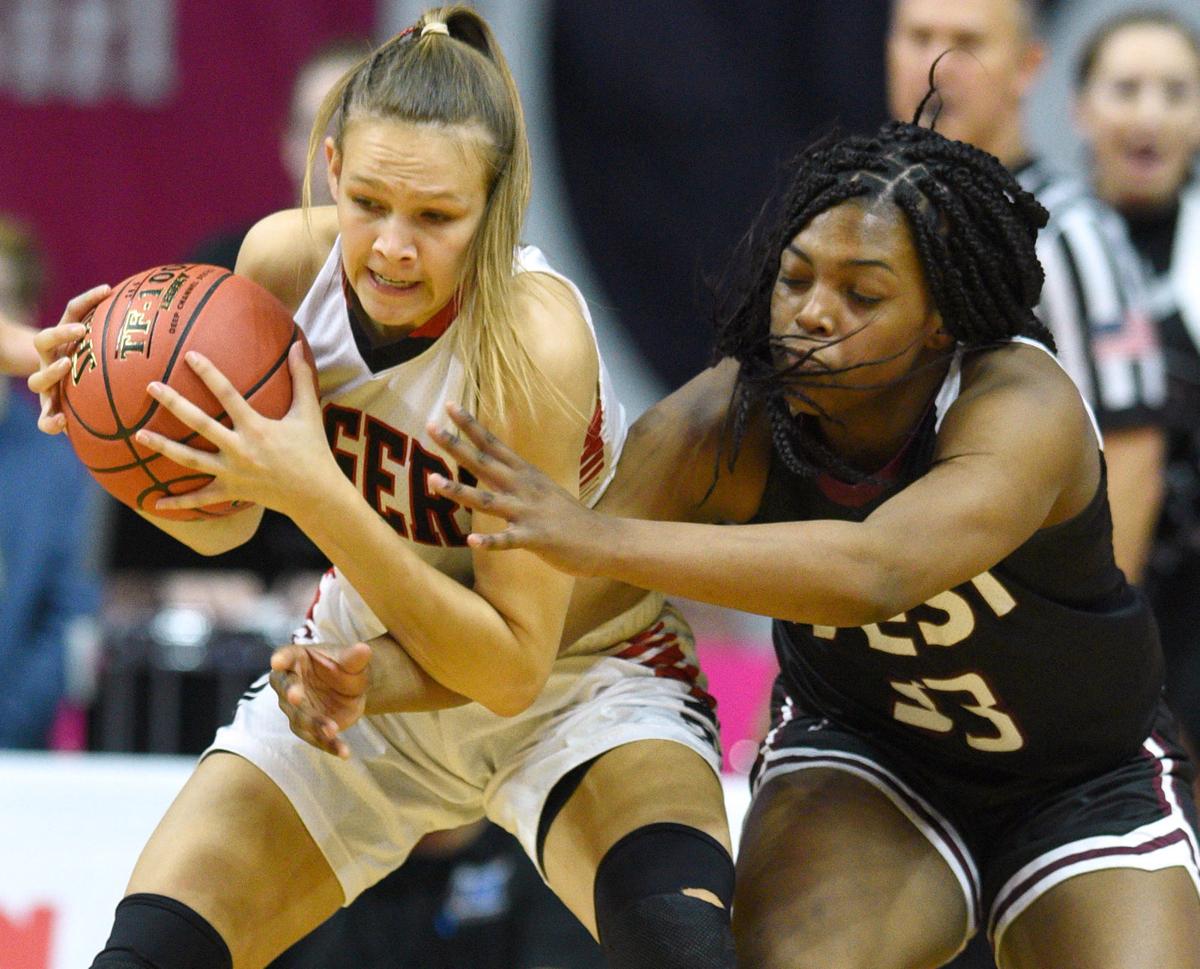 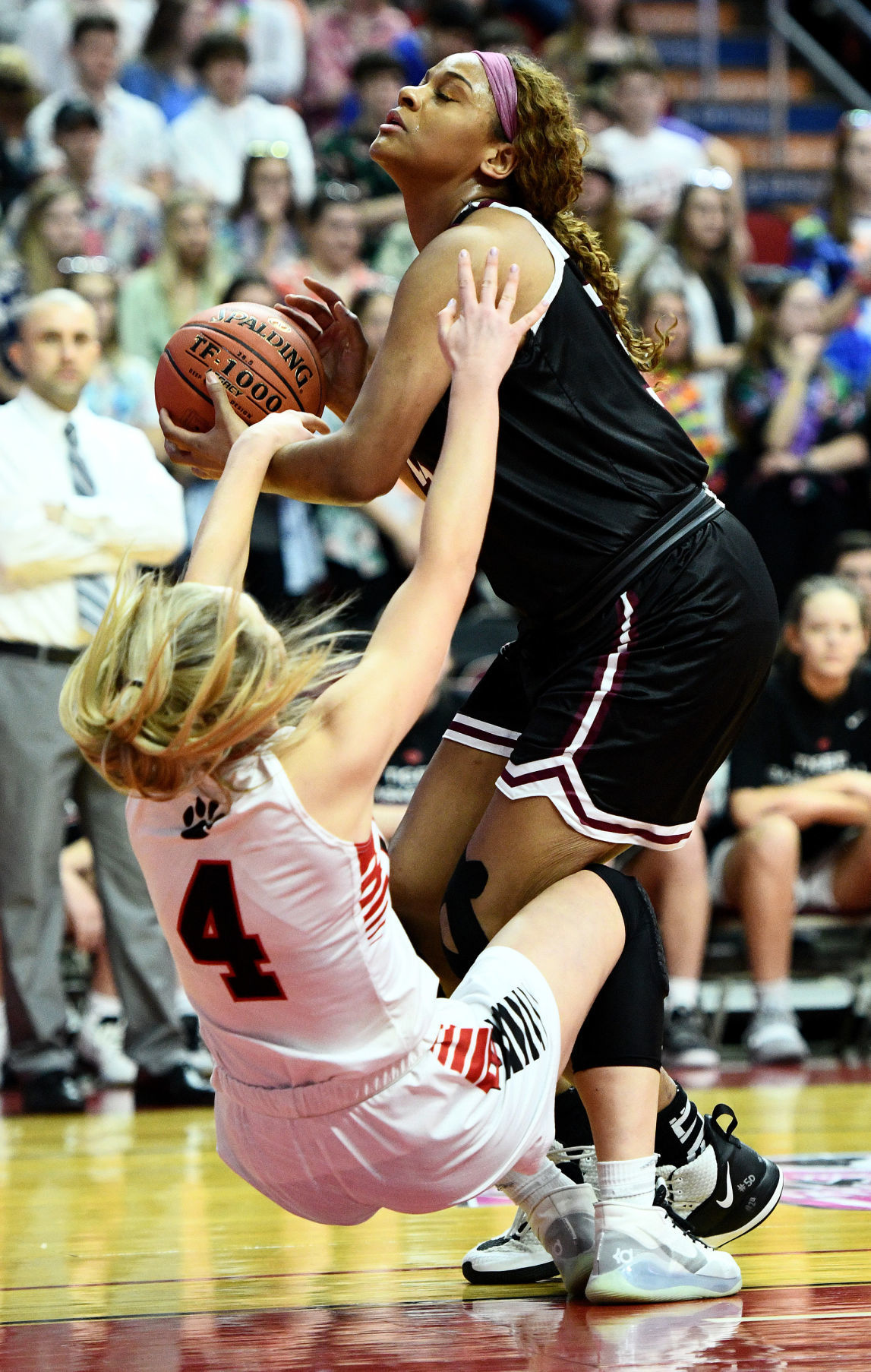 Poock scored 20 of her game-high 27 points in the second half as she willed the sixth-ranked Wahawks back from a 15-point deficit to a thrilling 51-49 victory over fifth-ranked Cedar Falls on Monday in a Class 5A girls’ state tournament classic at Wells Fargo Arena.

“What a fantastic win for West High School,” Pappas said. “I’m so proud of our players, our fans. We got down 15 points, made an adjustment or two, and our players never quit to the end. They came all the way back in the last seconds and won a tremendous state tournament game.

“I’m beyond ecstatic. What a special win for us. I can’t put into words the emotions we are going through.”

Cedar Falls called a timeout with 18 seconds left and the scored tied at 49-all. On the ensuing in-bounds play, the pass overshot its intended target. West freshman Sahara Williams raced underneath the errant pass. Williams drove the lane, allowed Tiger defender Emerson Green to race by, and sunk a layup with 14 seconds left.

On the other end, Cedar Falls’ Sydney Remmert broke free as the clock ticked toward zero, but her running 10-foot jumper bounced off the rim and out and West celebrated.

“We wanted it,” said Williams, who had 12 points, seven boards and five steals. “We just did what we had to do and got it done.”

West trailed 38-23 with 4 minutes and 23 seconds left in the third quarter after the Tigers’ Jasmine Barney scored on a layup. But the Wahawks closed the quarter on a 12-2 run, eight of them from Poock, who was twice fouled attempting a 3-pointer. Poock sank all six free throws, and it was 40-35 after three.

“We switched defenses,” Pappas said of the rally which saw the Wahawks begin pressuring Cedar Falls all over the court. “Cedar Falls is a very well coached team, and they were taking us apart. That is when we made the switch. That is the defense we have been playing all year long and it’s been good to us, and tonight it was real good to us. It got us some turnovers, including the steal at the end.”

Poock hit a 3-pointer with 4:27 left to get the Wahawks to within 42-40, and West had two cracks at tying. Lauren Conrey missed a layup, and Brooklynn Smith missed an offensive rebound and put back.

“I don’t think when we were down 15 that anybody really felt that this was going to be over,” Conrey said. “We weren’t going to let it be a blowout. We weren’t just going to give in to Cedar Falls.”

Poock had an off night from the field, hitting just 6 of 19 shots, but she continually attacked the basket and was 14 of 17 from the free-throw line.

“The coaches told me to keep shooting and they finally started falling,” Poock said. “We all stepped up big. When my shots weren’t falling everyone else stepped up and contributed. That is just how much trust and confidence we have in each other. We just kept going and kept going.”

Green led Cedar Falls with 19 points, six boards, four assists and two blocks in her final game as a Tiger.

“Basketball is a game of runs,” said Green, who will play at Northern Iowa next season. “We came out in the first half really playing hard and had a lot of energy. In the locker room we talked about maintaining it, just keep playing hard.

“In the end they got hot … they are a really good team. It just came down to them getting hot, and that is just basketball.”

“We knew it was going to be a battle when we stepped onto the court,” Anaya Barney said. “I’m really proud of my team and everything we accomplished this year.”

West outscored Cedar Falls 32-21 in the second half, including 16-9 in the fourth. After the Tigers took a 38-23 lead, they had three stretches of nearly three minutes of play where they did not score.

“I thought we got some good looks in the fourth quarter and we just couldn’t quite get any baskets to fall that would kind of extend our lead a little bit,” Cedar Falls coach Gregg Groen said. “Then when you got down the stretch and some of those baskets aren’t falling you get a little bit tighter. We got to a point where it came down to that last play and they were able to make that last play.”

Meeting in the state tournament for the second time, and in the rubber match of the season, this game was everything it was hyped up to be.

After West took an early 4-0 lead on four Poock free throws, the Wahawks struggled from the field. West made just 1 of 12 first quarter shots and was just 2 of 16 midway through the second quarter before finishing the half 6 of 22.

Meanwhile, back-to-back 3-pointers by Anna Sandvold and Lexie Godrey with 1:33 left in the first gave the Tigers their first lead, 8-5. Cedar Falls led 11-7 at the end of the quarter.

West’s Gabby Moore hit a 3-pointer to open the scoring in the second quarter, but the Tigers answered with a 9-0 run to take a 20-10 lead.

Williams scored inside and then had a steal and assist on a Poock layup that drew the Wahawks to within 20-14. But the Tigers got 3-pointers from Godfrey and Green to stretch their lead to 28-17 before Moore scored just before the halftime buzzer.

“I’m so excited for us as a team, and to beat Cedar Falls one last time, it was awesome,” Conrey said.

Metro girls' basketball preview: Cedar Falls, West among the best in Class 5A

In the unusual current times metro girls’ basketball coaches have more than X’s and O’s running through their minds as the 2020-21 season gets set to start in the coming week.

For the second time in metro history, the Cedar Falls and Waterloo West girls' basketball teams will meet in girls' state tournament.

Conrey, Green will be frenemies Monday

Life-long friends Lauren Conrey of Waterloo West and Emerson Green of Cedar Falls will lead their respective teams against each other Monday in a Class 5A state tournament opener.

Waterloo West rallied from a big deficit in the baker rotation to capture the Wahawks first state bowling championship Wednesday at Cadillac XBC.

No. 1 Dike-New Hartford turns back Jesup in 3A opener

Ellie Foster scored 21 points as top-ranked Dike-New Hartford advanced to the 3A semifinals.

No. 5 ranked Waterloo West takes on No. 1 ranked Waukee in the Class 5A semifinals of girls' state basketball at 11:45 a.m. Thursday, March 5.

Waterloo West's Sahara Williams (33) and the rest of the Wahawks celebrate their last-minute 51-49 win over Cedar Falls in Class 5A first-round action of the Iowa state basketball championships played Monday at the Wells Fargo Arena in Des Moines.

Cedar Falls' Lexie Godfrey (22) tries to pass to Cedar Falls' Jasmine Barney, far right, while being pressured by Waterloo West's Halli Poock (15) and Lauren Conrey Monday in the quarterfinal round of the Class 5A state tournament.