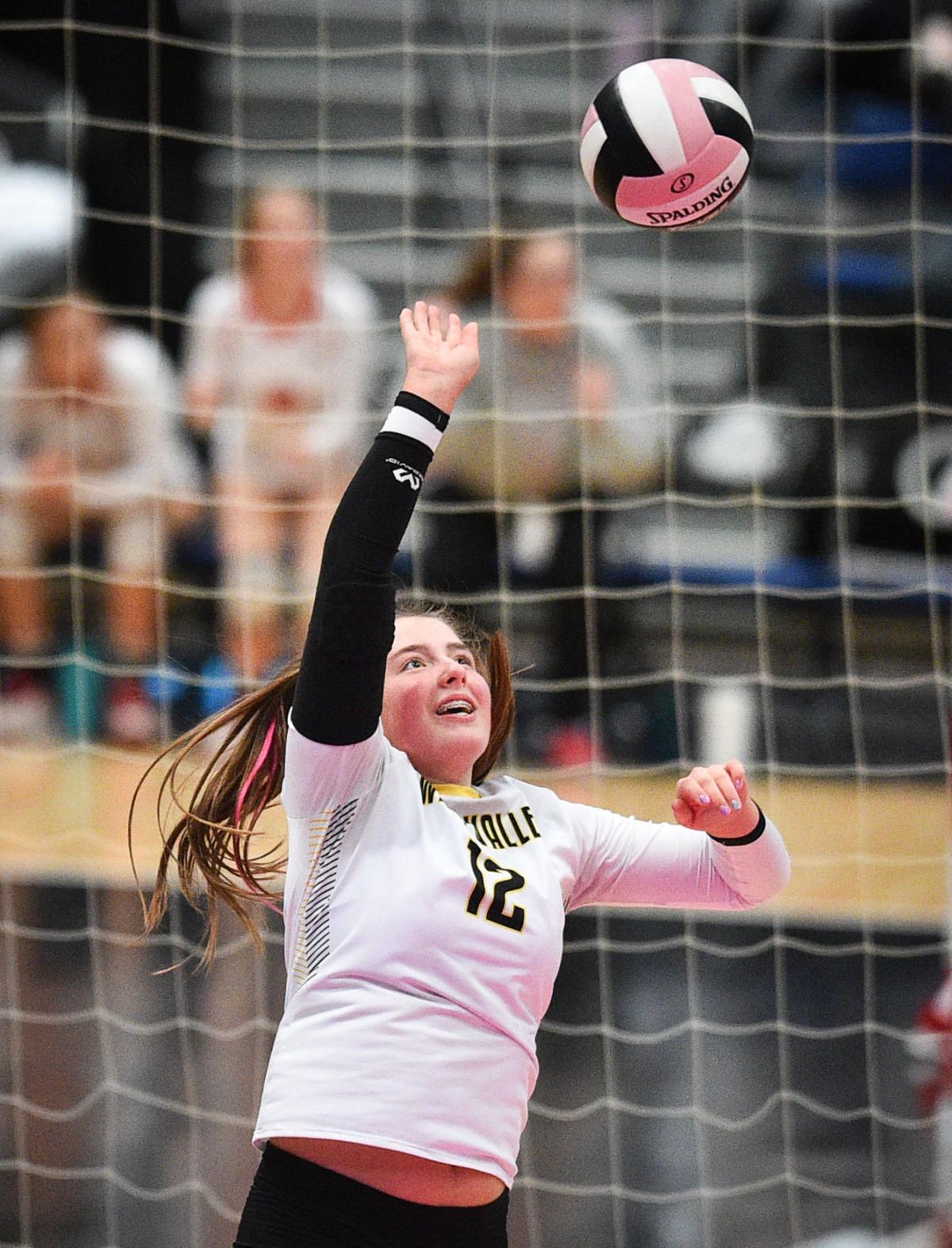 Wapsie Valley's Lydia Imbrogno goes up to the net for a kill against Holy Trinity Class during the 1A semifinal-round state volleyball action played Thursday, Nov. 14, 2019, at the U.S. Cellular Center in Cedar Rapids, Iowa. 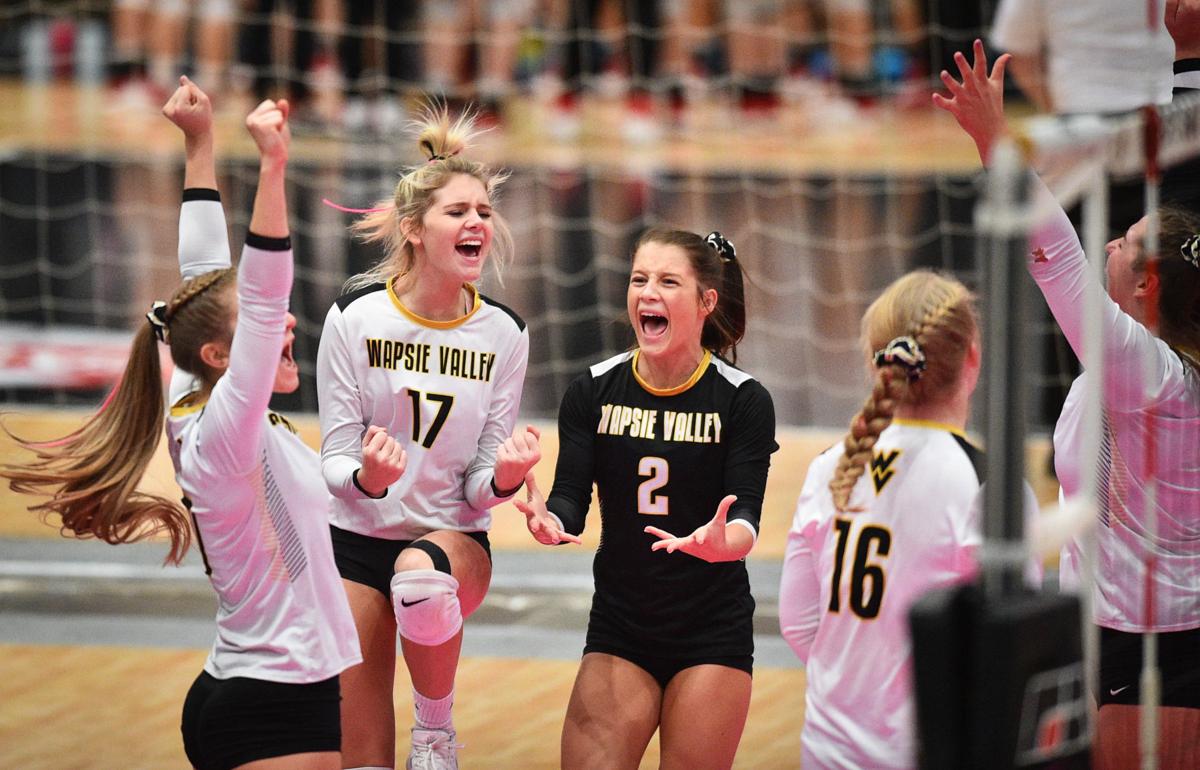 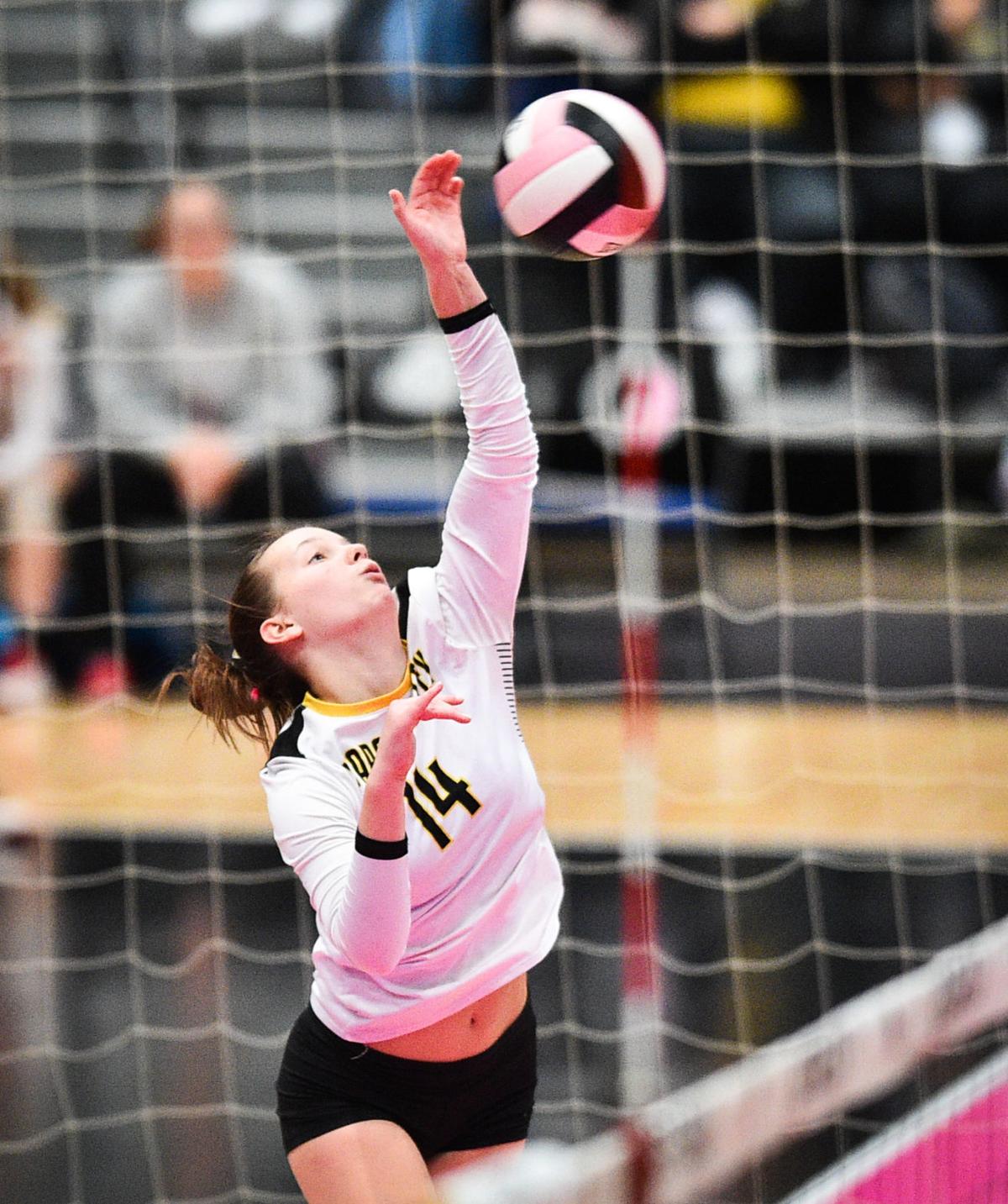 Wapsie Valley's Becca Platte goes up to the net for the kill against Holy Trinity Class during the 1A semifinal-round state volleyball action played Thursday, Nov. 14, 2019, at the U.S. Cellular Center in Cedar Rapids, Iowa. 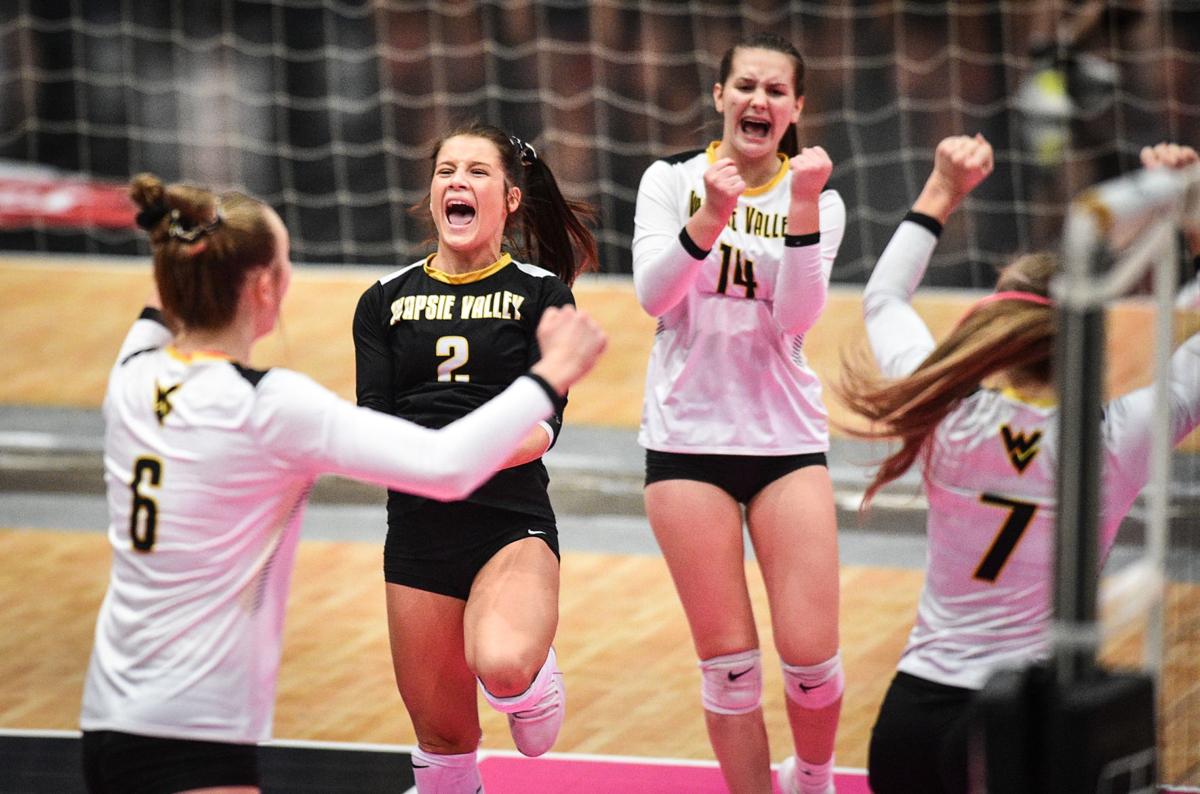 CEDAR RAPIDS — Wapsie Valley volleyball coach Heather Robinson saw the puzzle pieces of a team capable of playing on the season’s final day in front of her last summer.

Libero McKenna Miller and setter Kaci Beesecker provided stability entering their senior seasons, while a collection of four freshmen and two sophomores who would end up playing the varsity rotation possessed talent with the sky as the ceiling for what the Warriors could achieve.

The final piece of the puzzle has the potential to fall into place at 7 p.m. today when Wapsie Valley faces No. 1 Sidney for the Class 1A state championship inside the U.S. Cellular Center.

Wapsie Valley secured the program’s first finals appearance since its 2007 state championship season by prevailing in a pair of closely contested opening sets before sweeping Holy Trinity Catholic, 25-23, 30-28, 25-19, Thursday in the semifinal round.

“I had the feel of it in the summer,” Robinson recalled. “You could see the time that these girls have put into the game. It was there, it was just getting those right puzzle pieces to fit. We completed our puzzle and now we’re going to go for the championship.”

Sophomore Lydia Imbrogno led Wapsie Valley’s attack with 19 kills, while 6-foot-3 freshman Kalvyn Rosengarten added 14 kills on 21 swings for an aggressive Warriors team that finished with a 51-37 advantage in kills over the Crusaders (29-11).

Beesecker was brilliant, as well, with a triple-double of 10 kills, 36 assists and 14 digs.

“She runs our team,” Robinson said of her senior setter. “She knows exactly what to do. She keeps everybody involved and that has definitely gotten better through the season. She’s just so strong and driven and knows how to stay competitive. It’s amazing to watch her play.”

The Warriors leader hasn’t hesitated to set the bar high for her youthful teammates.

“She’s definitely demanding with them, and they know it,” Robinson said. “They respect her. She asks, and they do. They look up to her.”

Wapsie Valley (24-15) reached the championship stage after navigating a regular-season schedule that included losses to some of the area’s top programs. Imbrogno says her team worked to enhance its blocking and footwork, while confidence never wavered following losses.

That poise was evident in Thursday’s semifinal.

Imbrogno finished the first set with a kill down the line and a cross-court termination after Holy Trinity tied the score at 23. In the marathon set two, Beesecker and Imbrogno fought off Holy Trinity’s four-set points with two kills apiece before Wapsie Valley took the stanza on an errant attack.

The Warriors then closed the match out with 18 kills versus one attack error in the third set.

“Getting the ball to our aggressive players really helped,” Beesecker said. “We had to be smart and just be ready to move.

“We had to believe, and we believed in ourselves and our team. That made us so successful.”

Robinson, who served as an assistant coach during Wapsie Valley’s 2006 and 2007 championship seasons, sees some similarities between members of this year’s team and those previous winners.

“I have a lot of workhorses,” Robinson said. “A lot of athletes that play hard and are driven. Those girls back then, anything went. They just were aggressive Iowa girls that played volleyball. These girls that I have now, they definitely have the true love and passion for the game and nothing is going to beat them.”

CEDAR RAPIDS — Coaches paced back and forth on the sideline, while competitors felt a familiar tension and rush of adrenaline in the semifinal…

Cedar Falls has earned a place back on Class 5A state’s championship volleyball stage.

State volleyball: Sidney takes out North Tama in Class 1A

No. 1 Sidney held off North Tama of Traer Thursday in the Class 1A state volleyball semifinals at the U.S. Cellular Center in Cedar Rapids.

Osage could not keep pace with Western Christian's many talented offensive players as the Green Devils lost in the 2A state semifinals Thursday in Cedar Rapids.

Wapsie Valley's Lydia Imbrogno goes up to the net for a kill against Holy Trinity Class during the 1A semifinal-round state volleyball action played Thursday, Nov. 14, 2019, at the U.S. Cellular Center in Cedar Rapids, Iowa.

Wapsie Valley's Becca Platte goes up to the net for the kill against Holy Trinity Class during the 1A semifinal-round state volleyball action played Thursday, Nov. 14, 2019, at the U.S. Cellular Center in Cedar Rapids, Iowa.