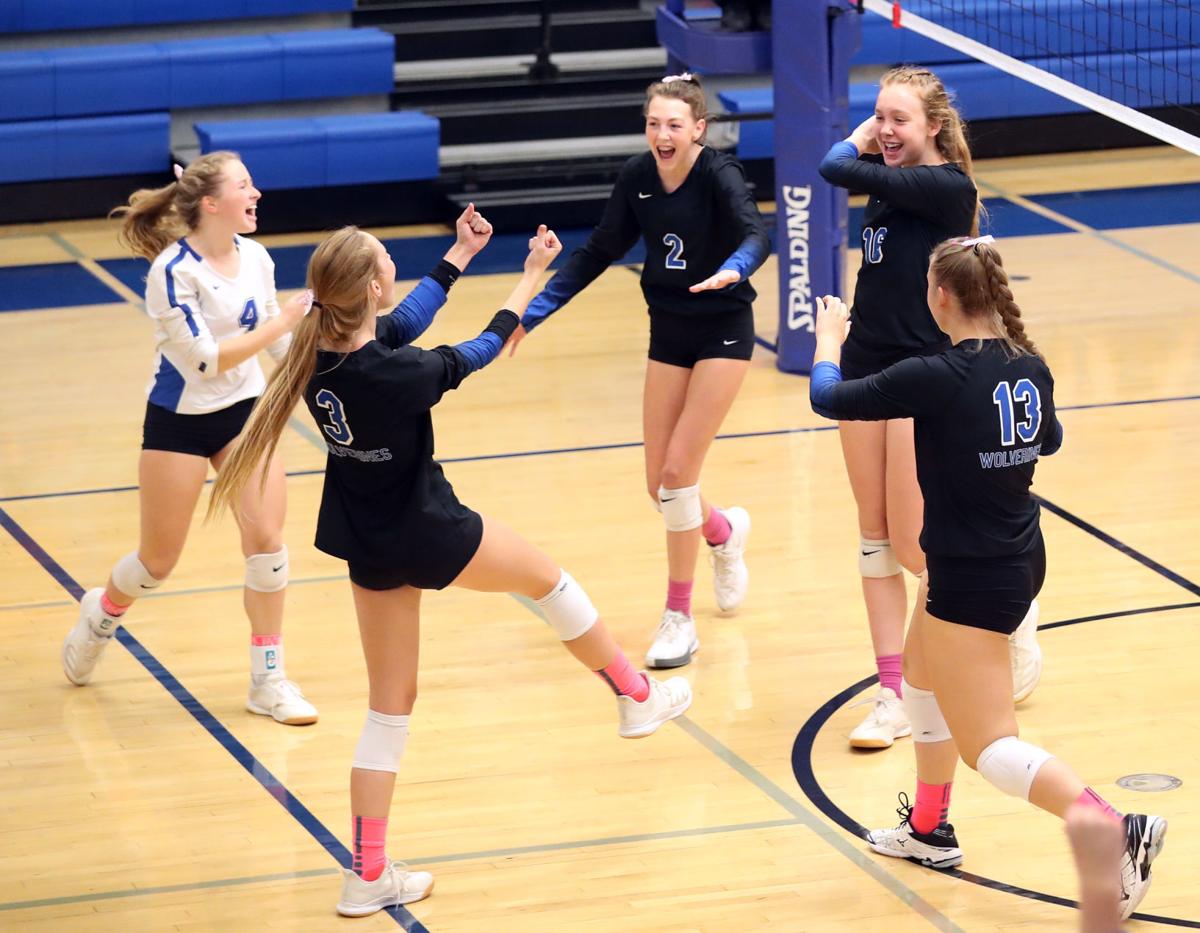 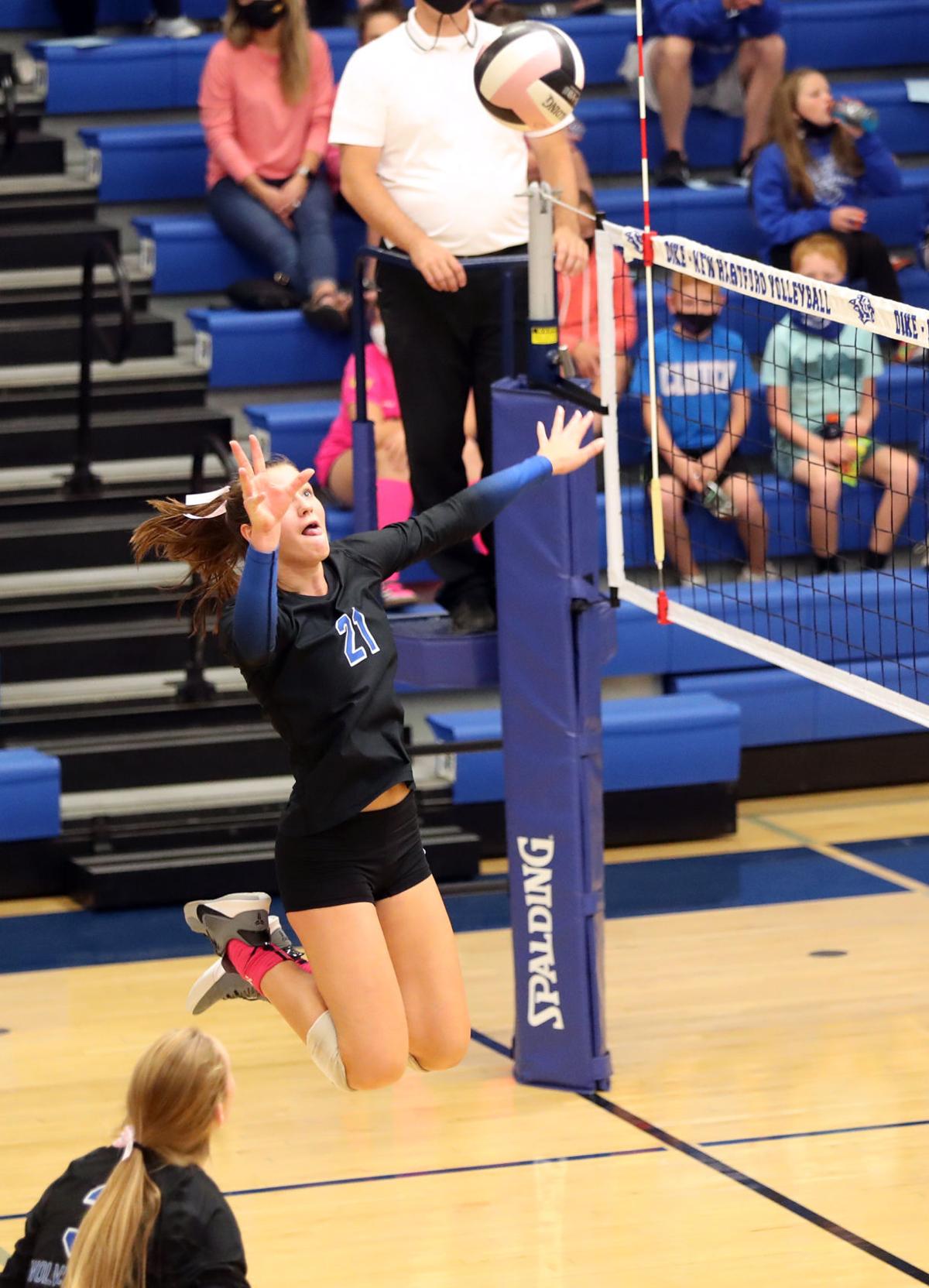 Dike-New Hartford's Payton Petersen goes up for a kill against Union Thursday during the Wolverines' NICL East title-clinching victory. 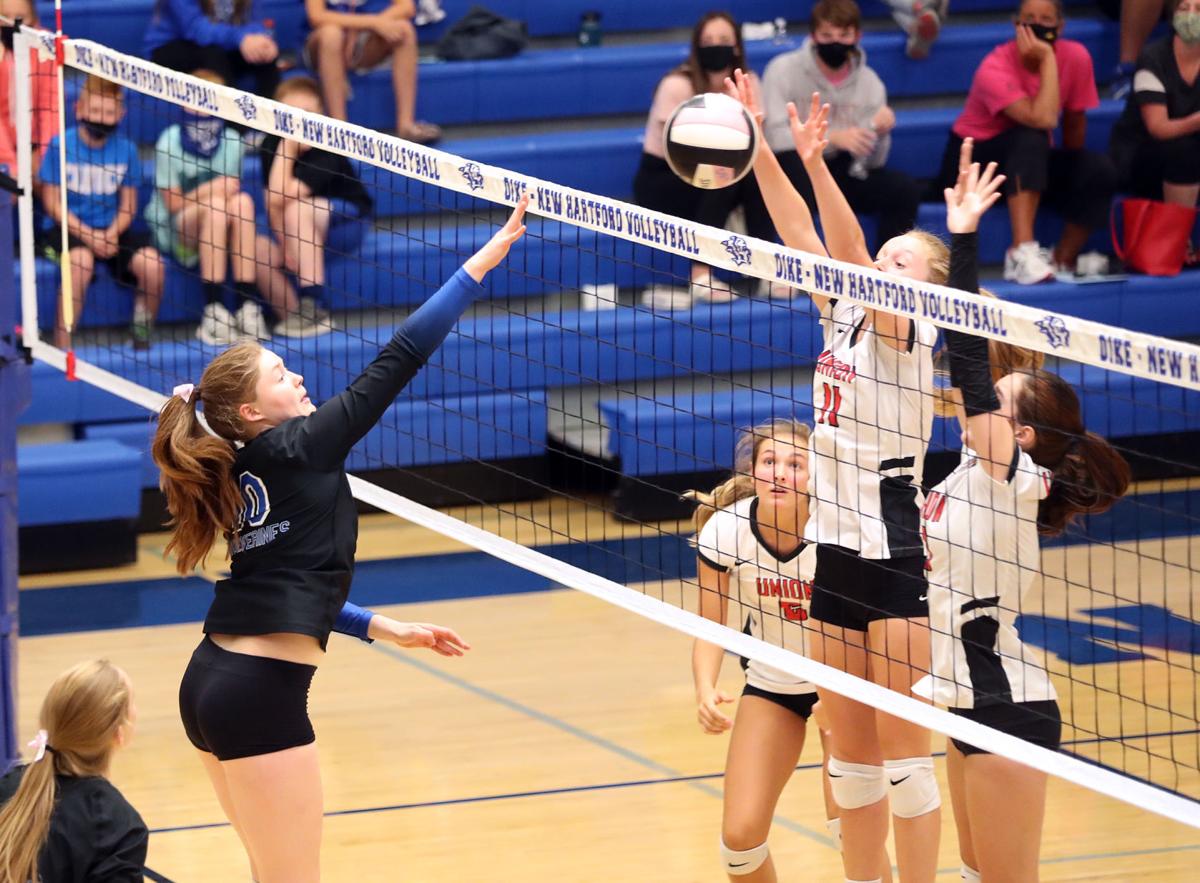 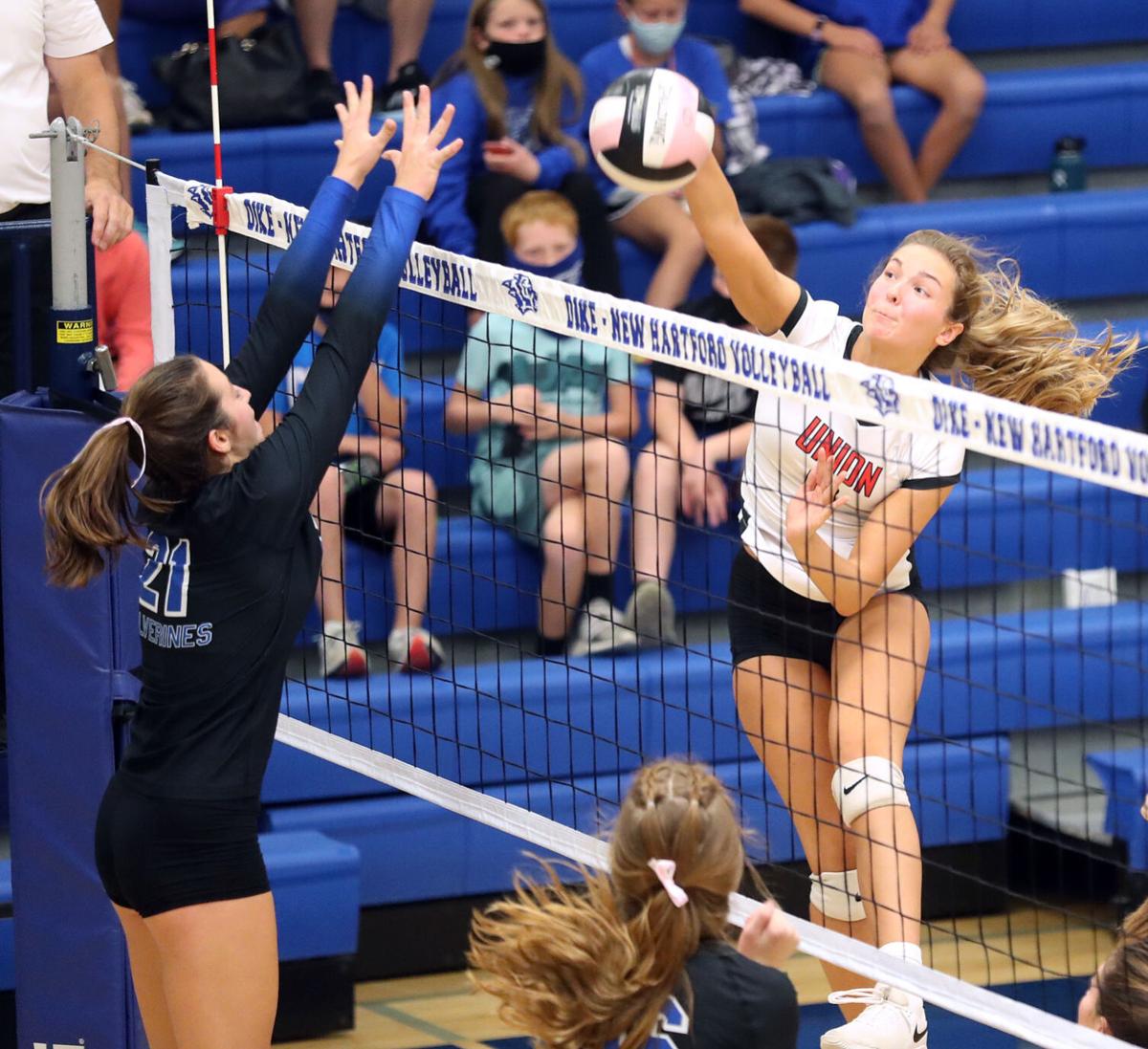 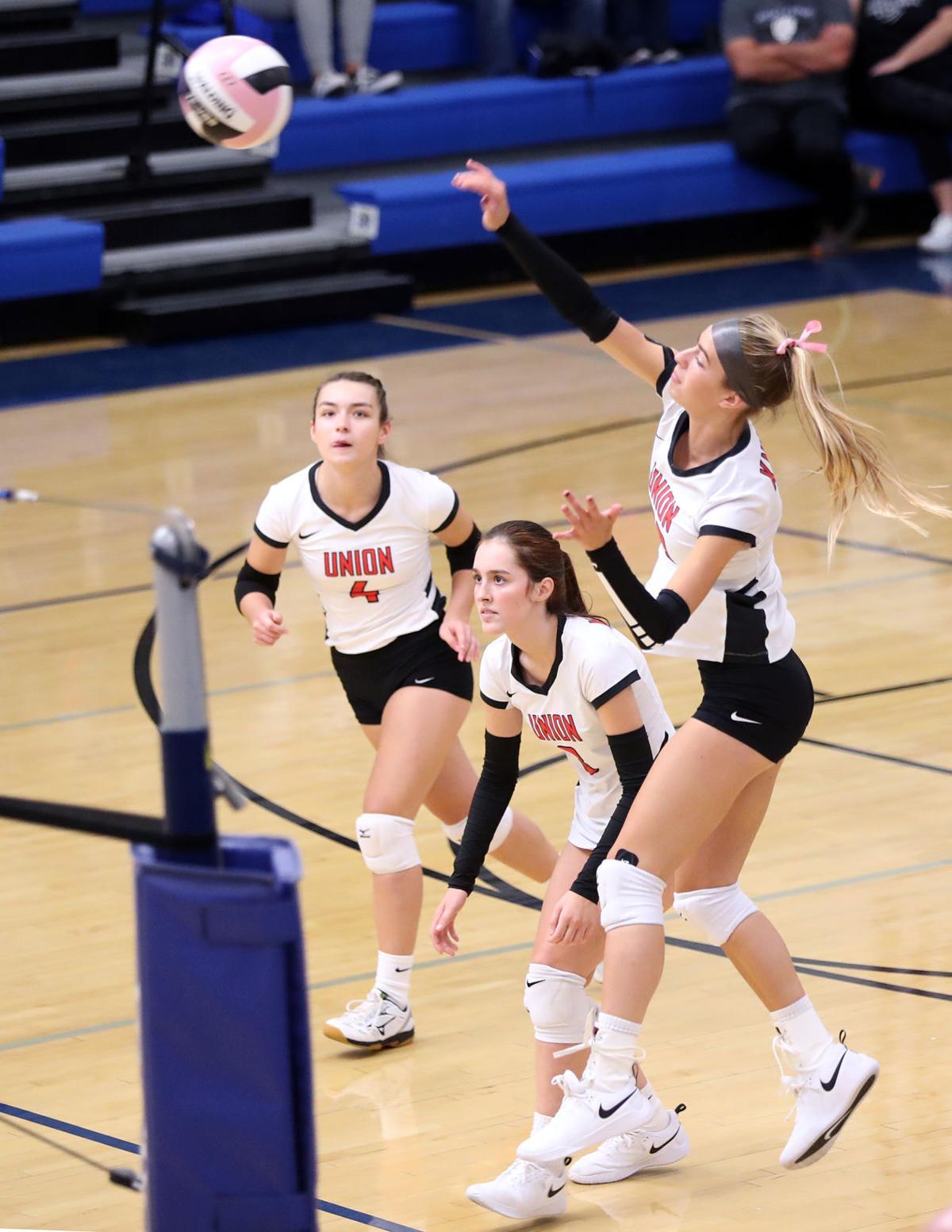 DIKE — Without her most familiar teammate by her side, Dike-New Hartford freshman Payton Petersen made sure her voice of encouragement was heard throughout Thursday night’s showdown against the only other undefeated team in North Iowa Cedar League East volleyball play.

Dike-New Hartford powered to identical 25-11 wins in the first two sets before rallying for a 25-21 victory in Set 3.

The Wolverines improved to 13-2 overall while the Cyclones fell to 13-2.

Petersen’s shot-making ability and connection with sophomore setter Madelyn Norton shined as she rattled off 18 kills during a sweep over Union Community inside Dike-New Hartford’s gymnasium, 25-23, 25-14, 25-19.

The win allowed D-NH (21-3, 7-0) to clinch its fourth consecutive title with one match still remaining in an NICL East division that has all nine teams within the state rankings. These Wolverines have now swept seven conference foes within a program that has won 32 consecutive league matches.

Union (27-6, 5-1), the most recent conference champion other than Dike-New Hartford, had prevailed in the previous meeting with the Wolverines during last fall’s postseason with a trip to state on the line. That’s all history to Petersen, who is among four underclassmen starters.

Prep of the week: Fun in the sun helped mold Union's Belle Weber into an all-stater

“It’s very exciting coming in as a freshman,” Petersen said. “We bond together so great, so to be out there with them and have this experience is really amazing.

“Everyone knows a lot about volleyball and how it works. The big thing we focus on is communicating with each other because we do know each part of it. We just have to put it together and make sure we do what we need to do.”

Payton’s twin sister and D-NH’s second-leading attacker, Jadyn Petersen, missed her second match since spraining an ankle in Monday’s practice. It marked a reversal from an earlier stretch when Jadyn had briefly competed without Payton due to a sprained ankle.

“I know what she’s going through so it’s very hard for me, not having her serve receive with me back there, not have her on the opposite side of the rotation,” Payton Petersen said. “I just can’t wait for her to get back.”

An 11-10 third set lead following one of Belle Weber’s team-high 17 kills marked the only time Union led in a frame on Thursday.

“They were better than us tonight,” Union coach Brian Jesse said. “We weren’t quite as sharp as we’ve been. I was happy with the third set. We came back and got after it and hustled a little bit. I thought the first two sets they outhustled us. I told them we’re not good enough to let people outhustle us.”

Payton Petersen and her twin sister Jadyn delivered superb performances as Class 2A No. 3 Dike-New Hartford swept No. 12 Sumner-Fredericksburg on Thursday night at home.

The Knights cut a late five-point deficit to 24-23 before Petersen ended set one with a well-struck kill. Norton took matters into her own hands with a kill that capped a 6-1 run as the Wolverines took control of the second set, 15-6. With the score tied at 19 in set three, Petersen unleashed one of her back row kills off a bic set (back row quick) from Norton for a sideout that sparked a match-ending 6-0 run capped off by Jillian Beuter’s ace.

“We started it in practices about a week ago,” Petersen said, addressing the back row quick attack. “That might be one of my favorite sets that Maddie does. She’s really good at that set, so it’s exciting.”

“I definitely felt like I needed to pick up my leadership a little bit more,” Payton Petersen said. “Maryn came in and she did a wonderful job. I just knew I had to keep her confident, keep her knowing what she was doing and cheer her up.”

Depth is abundant within this youthful team that plays like veterans.

“They’re playing really well together as a group,” D-NH head coach Diane Harms said. “They’re trying to extend rallies, keep balls in play and giving us another chance. We made some adjustments and our servers did a much better job as we got going hitting better spots.”

Rising up to the competition routinely found in conference play has made this year’s Wolverines that much stronger.

“They’ve played a lot of volleyball and they recognize a lot of stuff,” Harms said. “Our conference is extremely competitive night in and night out so we’ve seen a lot of different things which has allowed them to maybe grow and to be able to make some of the adjustments we’re asking them to make.”

Cedar Falls pushed Liberty to the limit before dropping a marathon fourth set, 30-28, in a volleyball match between two state tournament caliber teams.

JANESVILLE – Hours. Days. Weeks in a row? Most definitely.

Dike-New Hartford's Payton Petersen goes up for a kill against Union Thursday during the Wolverines' NICL East title-clinching victory.