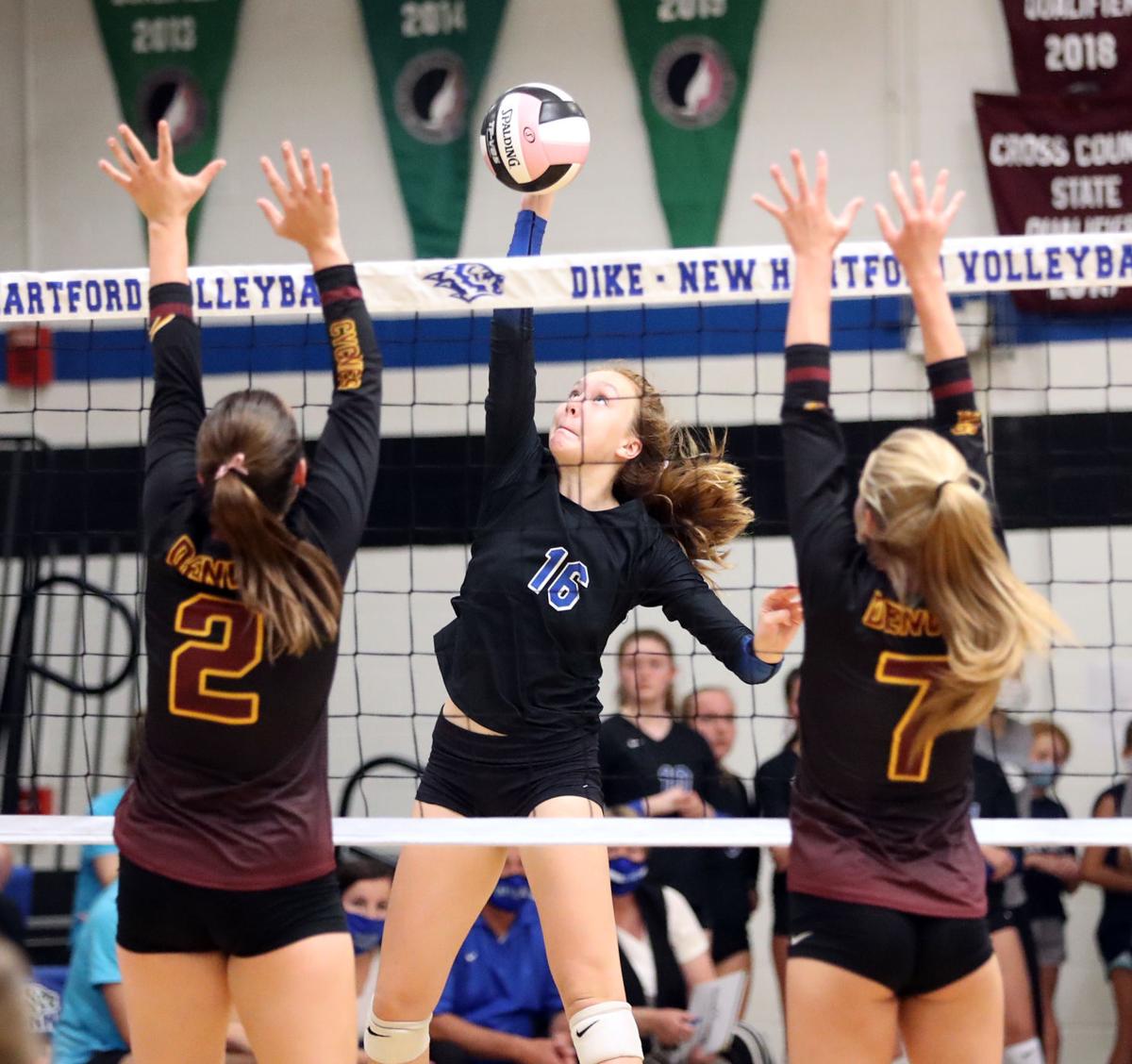 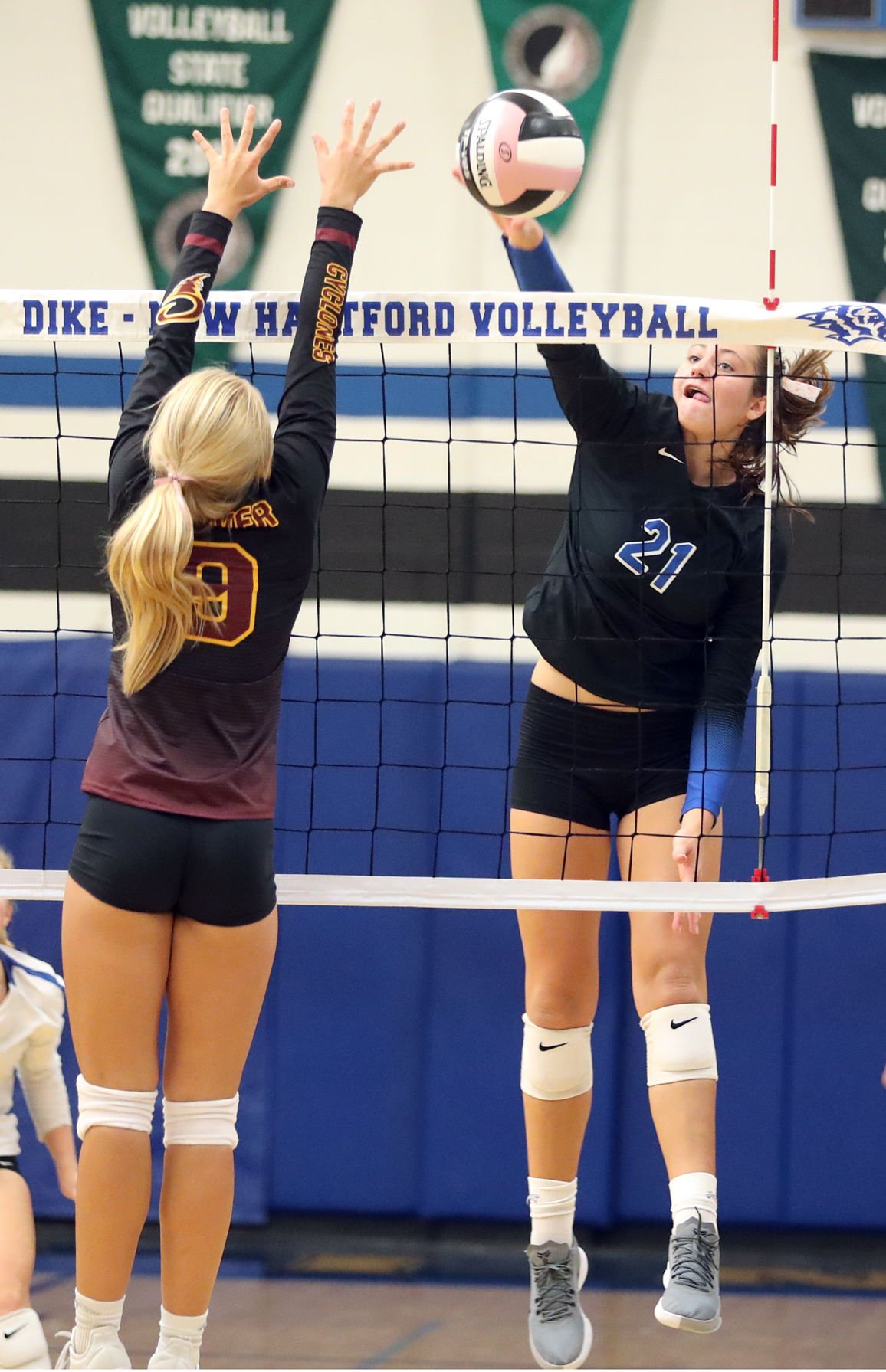 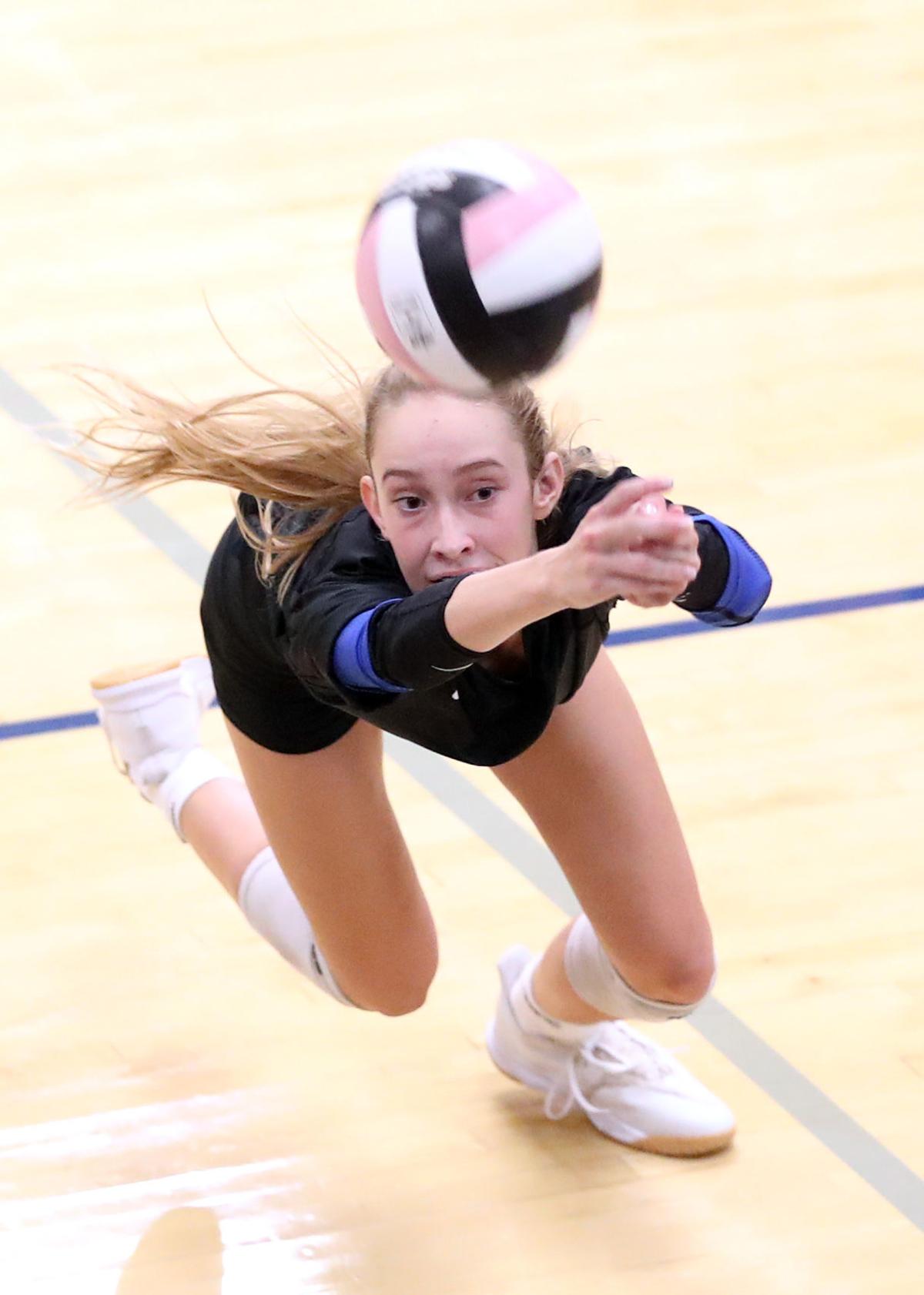 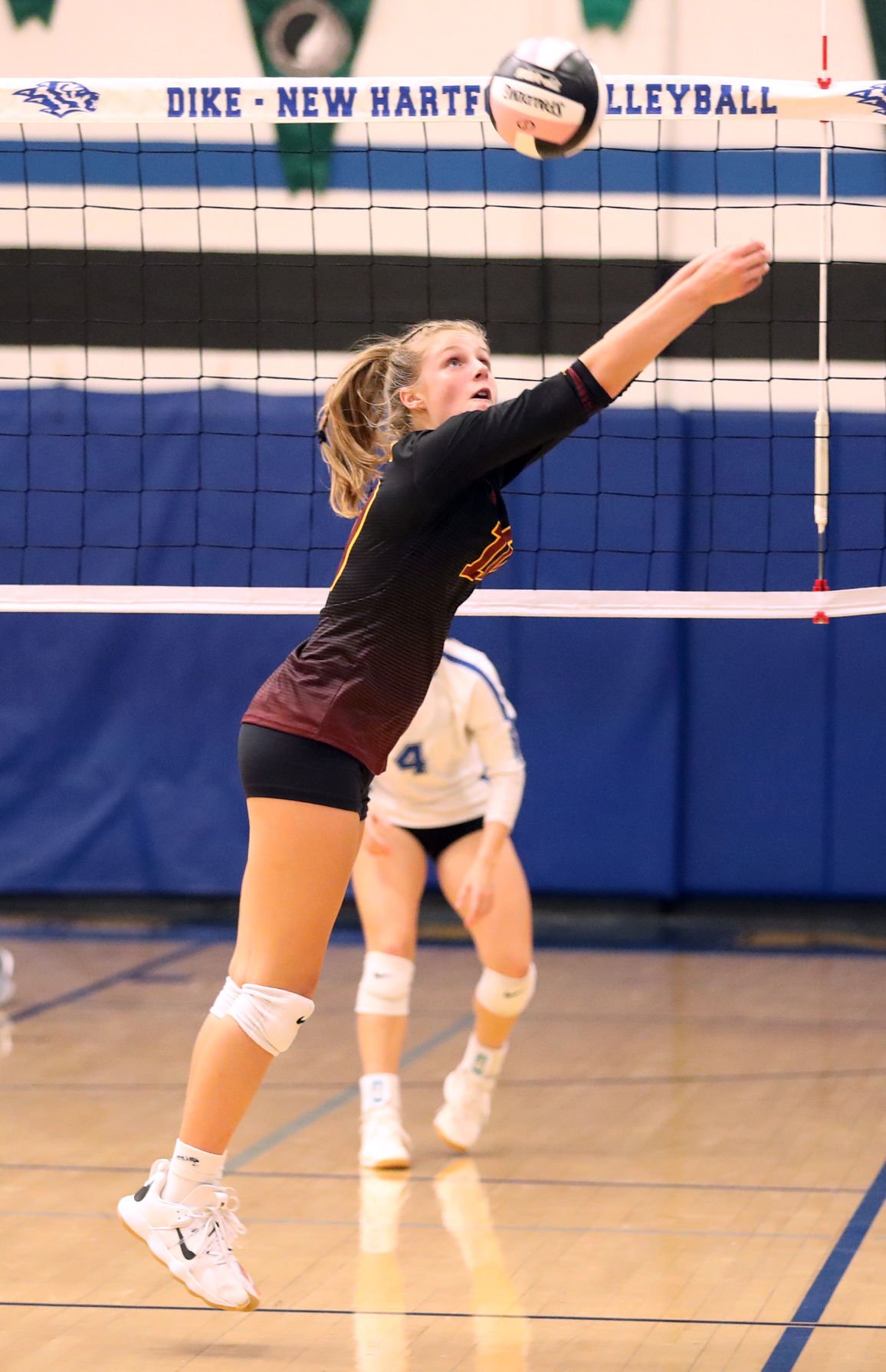 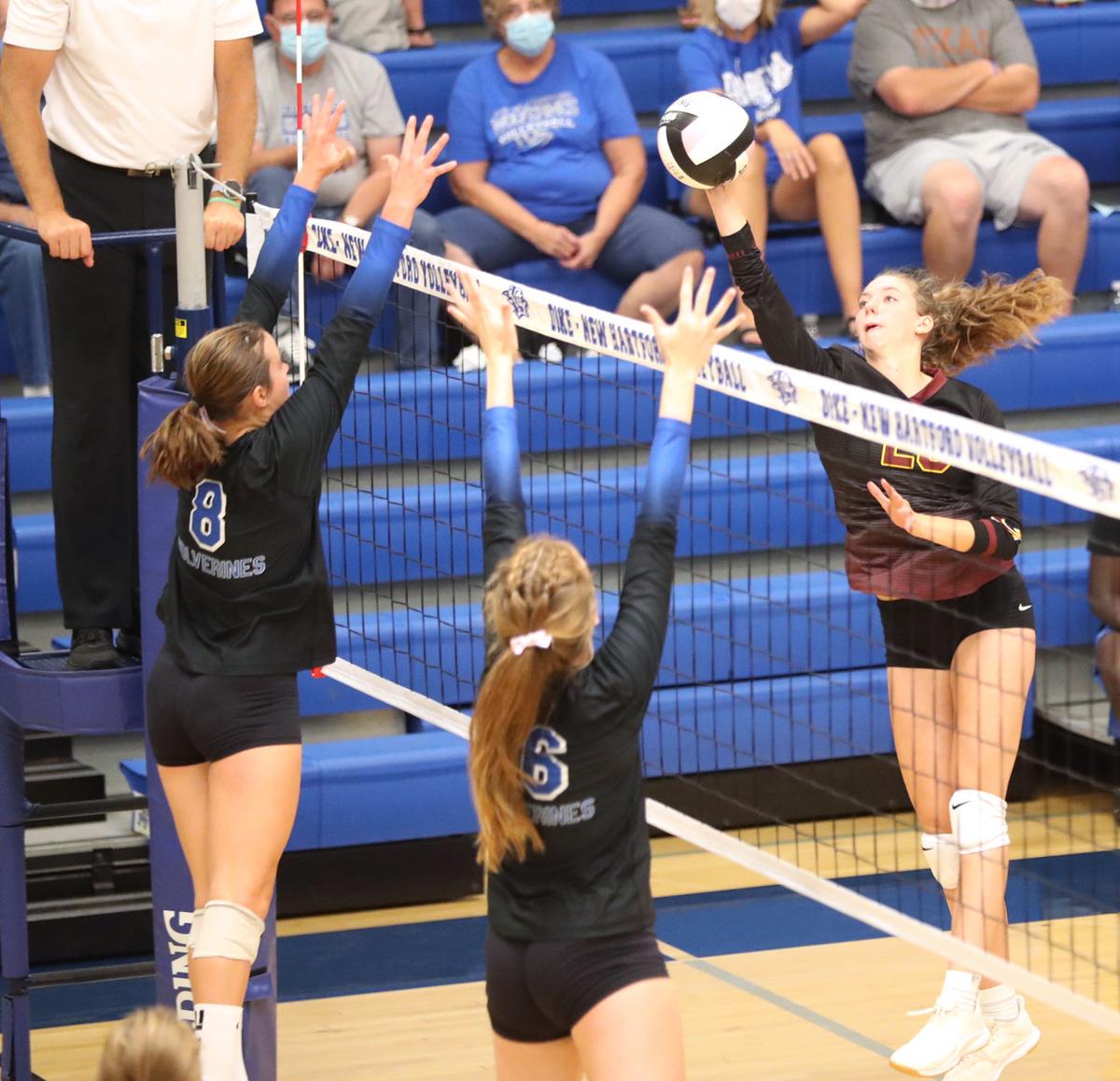 DIKE – The Dike-New Hartford volleyball team has played one of the state’s most challenging schedules.

And it showed Tuesday night.

The Class 2A No. 2 Wolverines bolted to a blazing start before sweeping No. 8 Denver in a battle of North Iowa Cedar rivals.

Dike-New Hartford powered to identical 25-11 wins in the first two sets before rallying for a 25-21 victory in Set 3.

The Wolverines improved to 13-2 overall while the Cyclones fell to 13-2.

“Denver is an exceptional team,” Dike-New Hartford coach Diane Harms said. “They have a lot of good weapons. We knew we had to be ready to play and get after it. Our girls did a good job of staying aggressive with our serves and our swings. Denver is having a terrific season and we knew they were going to battle us. We knew it wasn’t going to be easy.”

“Jadyn did a great job serving,” Harms said. “She was on all night with her serve and that was a big key for us. Her serve was very effective. She also played well in the front row. She gave us a big spark.”

“There are some really good teams out there and playing a tough schedule has helped us a lot,” Petersen said. “Denver has a great team and they were a tough opponent. We’ve made a lot of improvements and we just keep getting better.”

Petersen’s twin sister, Payton, dominated again at the net. She delivered with a pair of emphatic spikes and a pair of blocks during her team’s early run. She finished with 13 kills.

Dike-New Hartford led just 8-6 in the second set against the scrappy Cyclones before eventually pulling away. The Petersen twins continued to excel while junior Taylor Hoehns connected on a pair of spikes.

Sophomore Ellary Knock finished the second game with a spike.

Visiting Denver came back determined in the third set, leading for much of the way. The Cyclones went up 19-18 on a tip by Reese Johnson before the Wolverines rallied.

Dike-New Hartford regained the lead for good when Payton Petersen hammered a spike that Denver couldn’t handle. The Wolverines led 20-19 before closing out the match.

“We didn’t perform as well as we were hoping,” Denver coach Jamie Johnson said. “Dike is just a great team and they run an up-tempo offense. We obviously didn’t get off to a great start and that really hurt us. We needed to pass better and run our offense better. Our serve receive needs to be strong so we can run our offense and put our opponent on their heels.”

Johnson was encouraged with the improvement her team made in the final set.

“We didn’t really start playing like we are capable until Game 3,” she said. “We were hoping to perform more consistently. This was a good test for us. We have to learn from this and learn to hang with state-caliber teams.”

Wolverine sophomore setter Madelyn Norton was all over the court, collecting 36 assists.

Playing a difficult schedule is paying off already for Dike-New Hartford.

“We’ve really been tested against some great teams,” Harms said. “Every time we play somebody, they have a different strength and you try to adjust to that. We’ve made some good progress. We have a young team and we are learning a lot.”