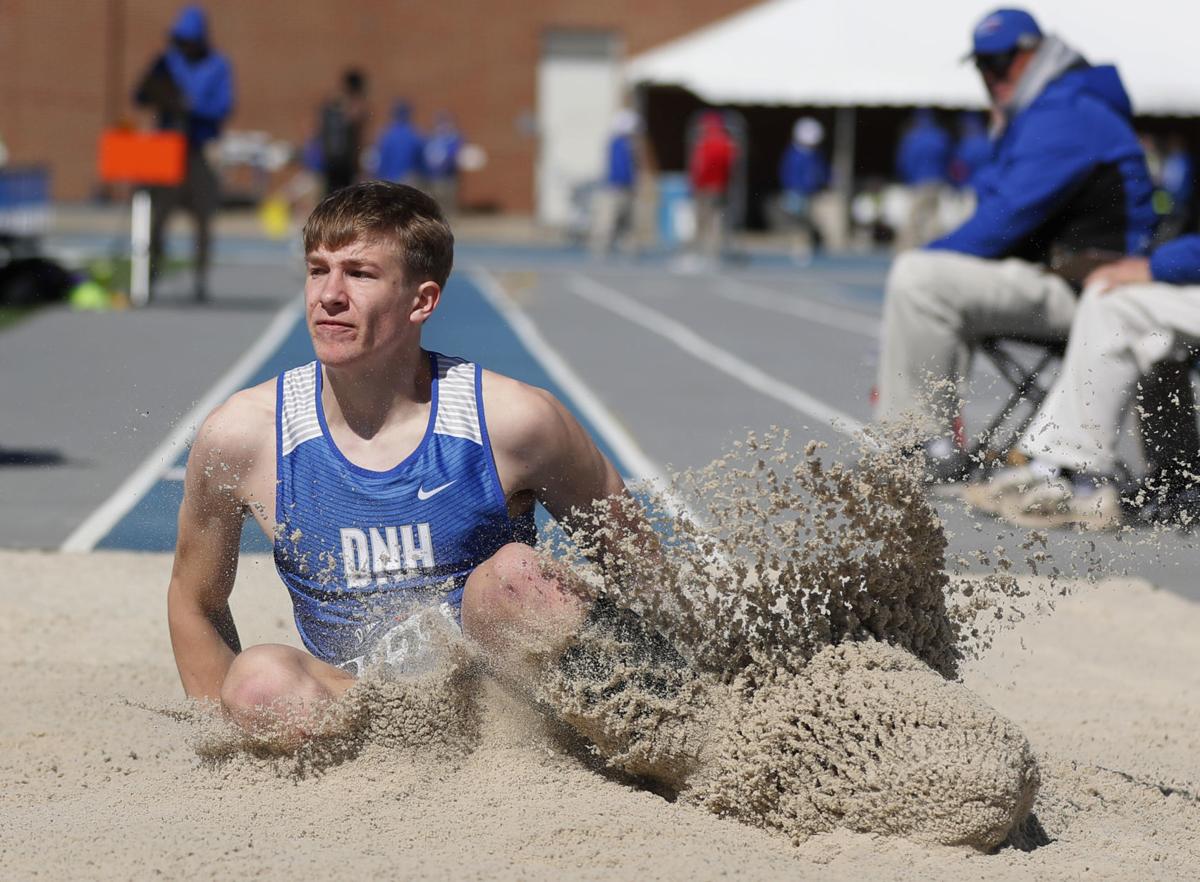 Dike-New Hartford's Parker Kiewiet lands in the long jump pit at the 2019 Drake Relays. Kiewiet secured his first Drake championship with a leap of 22-8 on his final attempt. 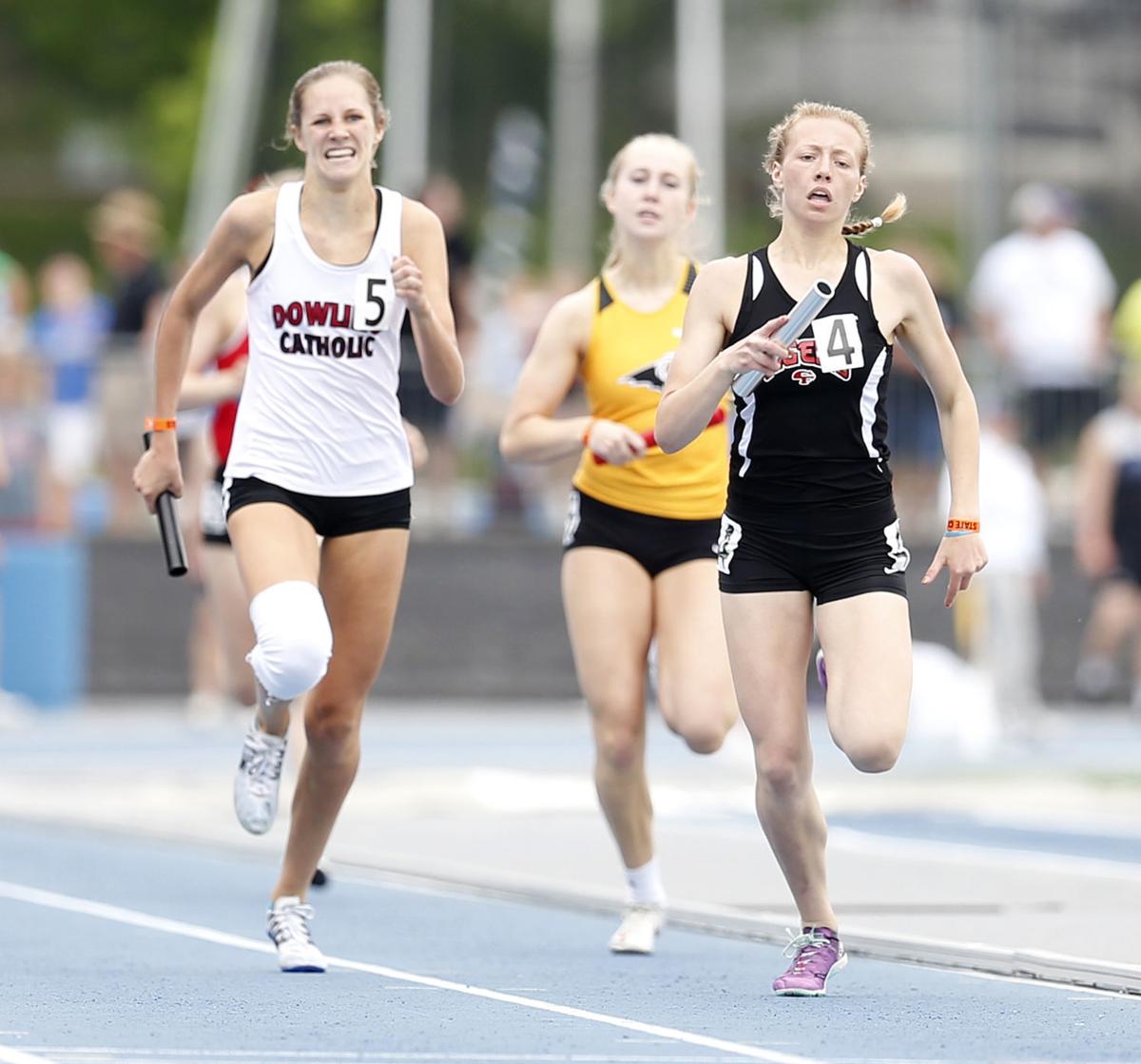 Dike-New Hartford’s Parker Kiewiet began last week with a little bit of hope, a sense of optimism that’s rare to find within senior athletes these days.

“It just gives me motivation to keep on practicing throughout this time,” Kiewiet said on Tuesday. “I didn’t know what to expect.”

A University of Northern Iowa track and field recruit, Kiewiet put together a junior season in which he won a Drake Relays and state title in the long jump. He also anchored a championship 4x400 relay, a runner-up sprint medley and a third place 4x200 to help lead Dike-New Hartford to the program’s first state team track and field championship.

“A kid like Parker, track and field is what he thrives on and is looking forward to — especially since last year’s success.”

Reingardt corresponded with IHSAA track administrator Jared Chizek to make sure he knew clearly what would be allowed during this four-week dead period in which coaches can’t run official practices or have face-to-face contact with athletes. He put together a list of optional workouts and left a Rubbermaid tub with starting blocks, shot put, discus, a medicine ball and an agility ladder on the track for any kid to use.

The Wolverines’ coach has also encouraged cross training ideas from bike riding to shooting hoops in the driveway and fishing.

“Anything that can get them outside and being a kid are going to be my suggestions to them,” Reingardt said.

Kiewiet — who recorded a strong leap of 22 feet, 5 inches in the long jump to secure an indoor championship at Wartburg before the season was postponed — said investment remains high within his team. They’ve coordinated small-group workouts.

“We’re talking to each other and making sure that everyone is going to do their workouts because there is that possibility (meets resume),” Kiewiet said. “We want to keep this as normal as possible because it’s obviously very weird in the real world.”

Indeed, these are uncertain times.

Cedar Falls girls’ track and field coach Chris Wood’s optimism quickly turned to concern a couple weeks ago. The Tigers are coming off a 2019 second place state team finish in Class 4A that matched the best effort in school history.

Cedar Falls’ athletes showcased plenty of upside competing against the state’s elite during the Dickinson Relays inside the UNI-Dome on March 9.

“We were able to get outside, start growing as a team and get stronger,” Wood said. “Then you get five or six days when it really started to turn. It’s just chaos. Nothing you could really ever imagine.”

The Tigers’ coach instructed his team to take a step back last week.

“We told our athletes to take the week and wrap your heads around things, have some reflection,” Wood said. “We asked them to reach out to others, people that have impacted them in the past that they’ve had gratitude for, and take some time to themselves.

“It’s a hard time to process anything for anybody, let alone teenagers. This is most definitely one of the most uncertain times that they’ve faced. Then we’ll communicate weekly from here on out and see how things go.”

Wood has a roster near 90 athletes this spring, 44 of them are freshmen starting to get the feel for the sport at the high school level. The camaraderie that accompanies a group that size will be desperately missed.

“Track is a very social sport and it’s an amazing sport because everybody can PR (set personal records) and you can always compete against yourself,” Wood said. “The vast majority of athletes on our team don’t run at state or at Drake so we pride ourselves in having a really good atmosphere and having fun.”

In addition to coaching track and field, Reingardt works as a physical education instructor in the Dike-New Hartford school district. He hopes kids find ways to remain active during this period of social distancing.

“I told all my PE classes this is the time where your teachers have taught you a lot of different things,” Reingardt said. “You have to use the tools that we’ve taught you to do a lot of this stuff on your own.

“At some point in your life you’ll be done with athletics. You won’t have PE class anymore. You won’t have recess anymore. You’re going to have to be able to take care of yourself on your own. Unfortunately it’s a lot sooner during this time than ever for these kids to not have those resources.”

A collection of the state’s top prep track and field athletes gathered inside the UNI-Dome over the last two days.

Dike-New Hartford's Parker Kiewiet lands in the long jump pit at the 2019 Drake Relays. Kiewiet secured his first Drake championship with a leap of 22-8 on his final attempt.