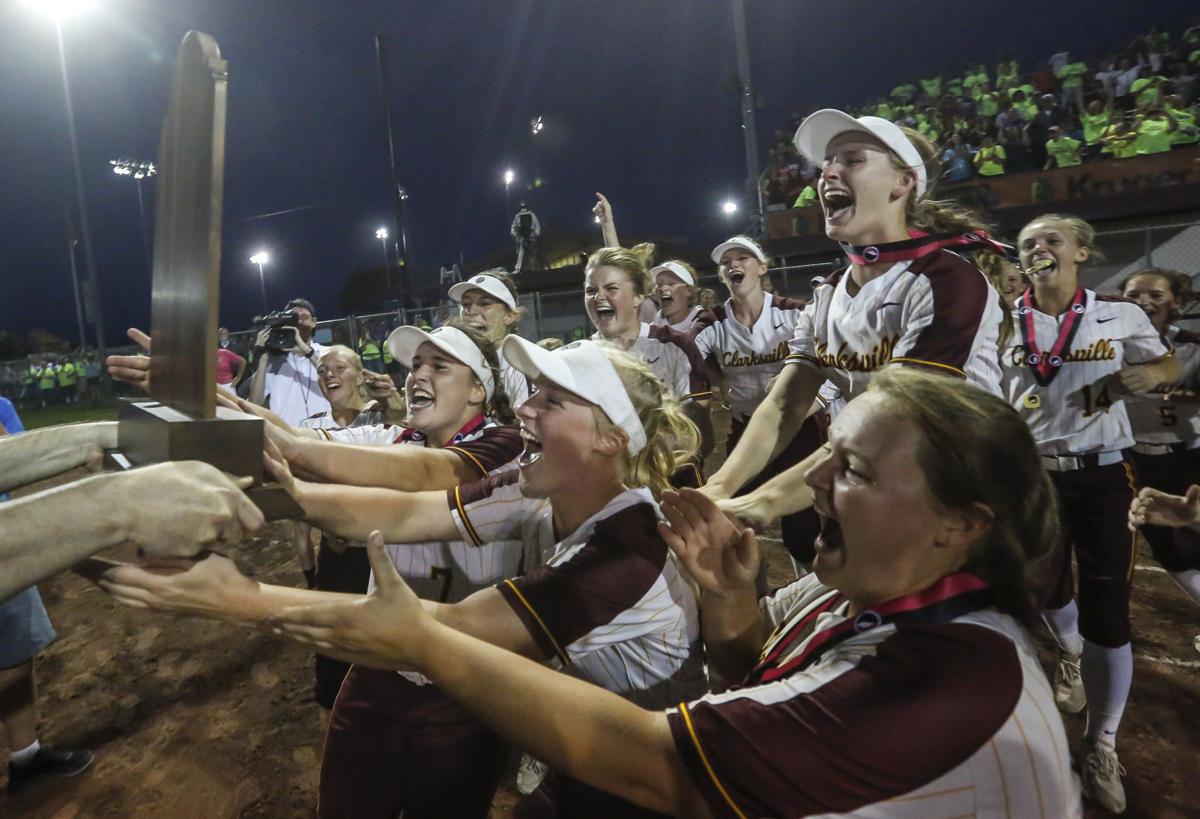 Clarksville's players receive their state championship trophy following their win over Collins-Maxwell in 2020. 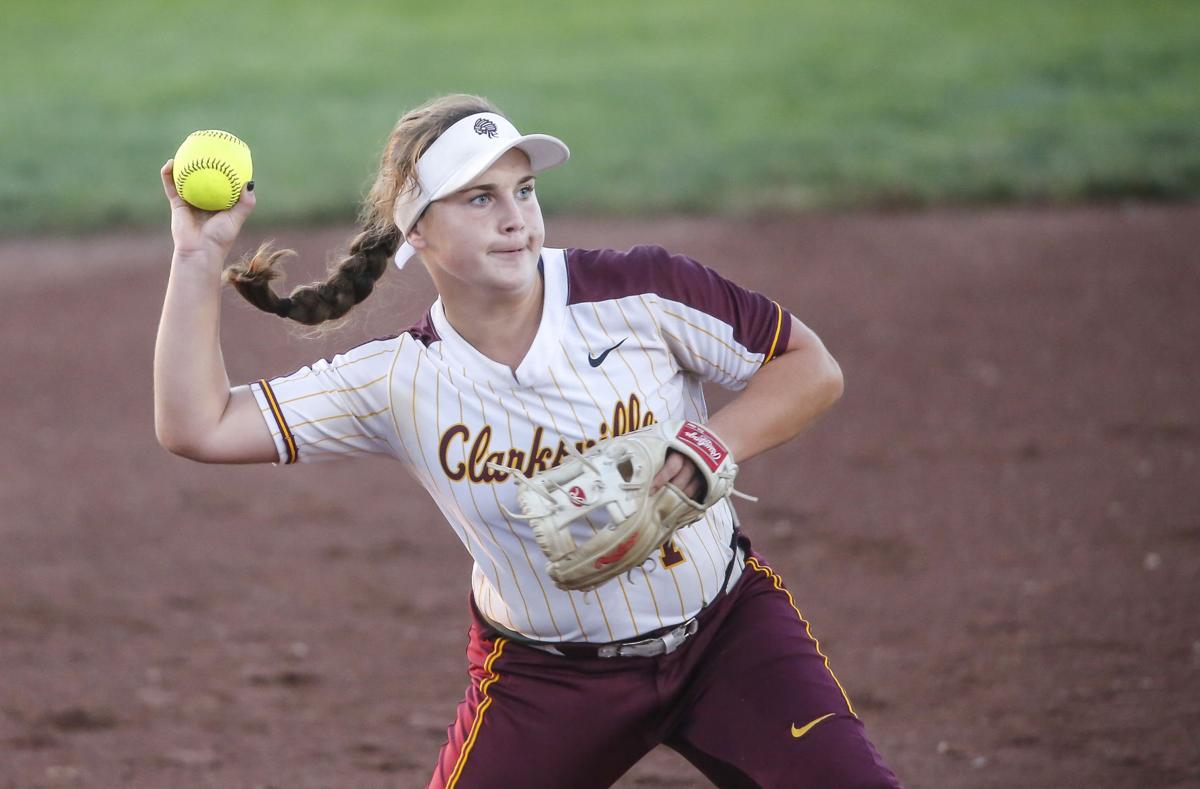 Clarksville shortstop Cheyenne Behrends throws a runner out during a win over Collins-Maxwell. 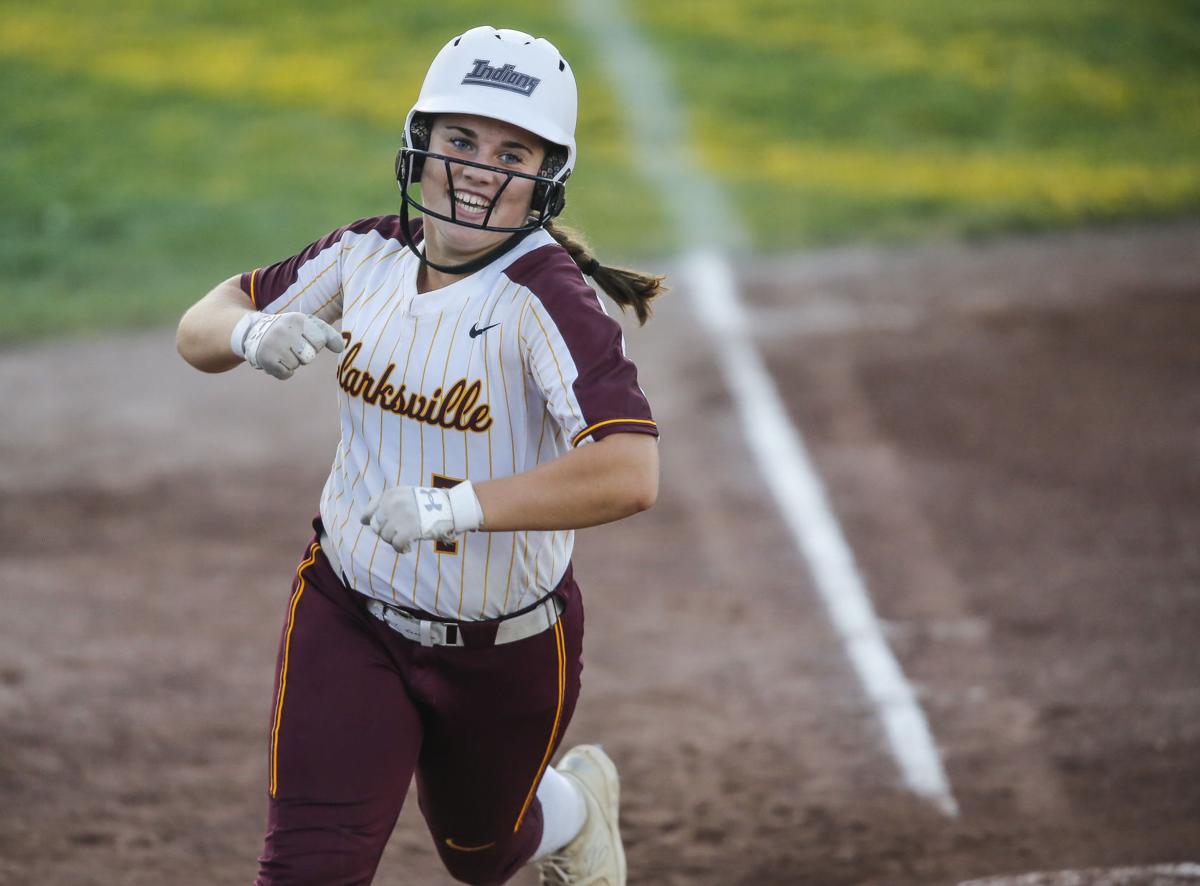 Clarksville's Cheyenne Behrends rounds third base after hitting her first of two solo home runs against Collins-Maxwell in the 2020 state championship game.

CLARKSVILLE – It’s crazy to think of the Clarksville High School softball team as an underdog.

After all, the Indians have played in three of the last four Class 1A state championship games.

And they are the returning state champions.

But after losing five key seniors from last year’s team, including all-state pitcher Kori Wedeking, Clarksville was not expected to be a state title contender in 2021.

Ranked outside the state’s top 10 much of the season and sent on the road in a tough regional final against Collins-Maxwell, the Indians still came through again to punch their ticket to Fort Dodge.

Clarksville is scheduled to open state tournament play Monday afternoon at 1:30 against Lisbon.

“The last three times we went to state we made it to the championship game – we have players who know what it’s like to play in big games,” Clarksville coach Katie Wedeking said. “We just worry about the game that day and don’t look forward. We stay focused on the team we are facing.”

Not being the favorite is a role the Indians have embraced this summer.

Clarksville, ranked 11th in the state, went on the road earlier this week and knocked off third-ranked Collins-Maxwell. The Indians defeated the team they beat in the 2020 state finals just to qualify for state this year.

“This year has probably been the funnest year for the players and coaches because there has been a lot less pressure,” Coach Wedeking said. “We know how we good we are and we’ve worked really hard to get to this point. And now other people are seeing it.”

The regional pairing was puzzling since Clarksville and Collins-Maxwell had met the last two years in the state title game.

“It motivated us a lot when they put us in that regional,” Coach Wedeking said. “We knew if we beat Collins-Maxwell it would be the best way to make it to state. It was a tough game on the road, but our team was ready. We have girls that have been around this program and they really came through.”

Clarksville is led by senior all-state shortstop Cheyenne Behrends, the captain of the all-tournament team last year at state.

Behrends, a Minnesota State commit, is batting an even .500 with 14 home runs, 42 RBIs and 12 stolen bases. She also excels at shortstop as the captain of the infield.

“Cheyenne has played shortstop for us since eighth grade,” Coach Wedeking said. “This is her fourth state appearance. She is one of our leaders and she’s so smart. She is a heck of a hitter and her fielding is impressive. Not much gets by her at short. She is just a great all-around player.”

Junior Sierra Vance has been one of the biggest surprises and keys to Clarksville’s return to state this year.

Vance stepped into the pitcher’s circle, occupied the previous five seasons by Kori Wedeking, and has dominated opposing batters.

She has a 21-4 record with a 1.09 earned-run average. Vance has struck out 188 batters in 148 innings. She allowed just two runs in the regional final victory.

Vance also has been productive at the plate for the Indians. She is batting .416 with five home runs and 33 RBIs. She delivered a clutch two-run homer in the regional finals.

“Sierra has really been a great leader for us,” Coach Wedeking said. “She stepped into that role as our pitcher and she’s worked really hard at it. I’m really proud of her. She had never batted in a varsity game before this year, but she’s become one of our top hitters. I can’t say enough about how much she’s contributed for us.”

Sophomore catcher Jenna Myers also has been superb offensively and defensively for Clarksville. She is batting .420 with seven home runs and 27 RBIs.

“Jenna is one of the best catchers in the area and she has one of the best arms in the state,” Coach Wedeking said. “And she’s had a lot of big hits for us. She hit a big home run against Collins-Maxwell that helped us get back to state.”

Clarksville’s lineup is lethal from Behrends in the leadoff spot all the way through the No. 9 hitter. The Indians are batting an impressive .370 as a team.

“We’ve had so many players step up for us,” Coach Wedeking said. “It’s definitely been a total team effort with a lot of people contributing to our success. It’s been great to see.”

Clarksville, as usual, heads to Fort Dodge with sky-high expectations. But the Indians are keeping everything in the proper perspective.

“We are only looking at the first game – that’s all you can do,” Coach Wedeking said. “We need to win that game obviously to get in the top four. We played Lisbon last year at state and we beat them 4-0. They have the same pitcher and I think it helps since we’ve faced her before.

“We’re excited to be going back to state, but we just try to stay in the moment every inning. And we try to keep our game plan steady all through the game. That’s been the key for us all season.”

Clarksville's Cheyenne Behrends having one heck of an encore

One of the heroes on the high-powered Clarksville team that captured a 2020 state softball title, the Minnesota State-Mankato recruit has socked 12 home runs already this summer.

Clarksville headed back to state

COLLINS – Returning state champion Clarksville knew it would have its hands full in the Class 1A Region 7 softball final Monday night.

Clarksville's players receive their state championship trophy following their win over Collins-Maxwell in 2020.

Clarksville shortstop Cheyenne Behrends throws a runner out during a win over Collins-Maxwell.

Clarksville's Cheyenne Behrends rounds third base after hitting her first of two solo home runs against Collins-Maxwell in the 2020 state championship game.