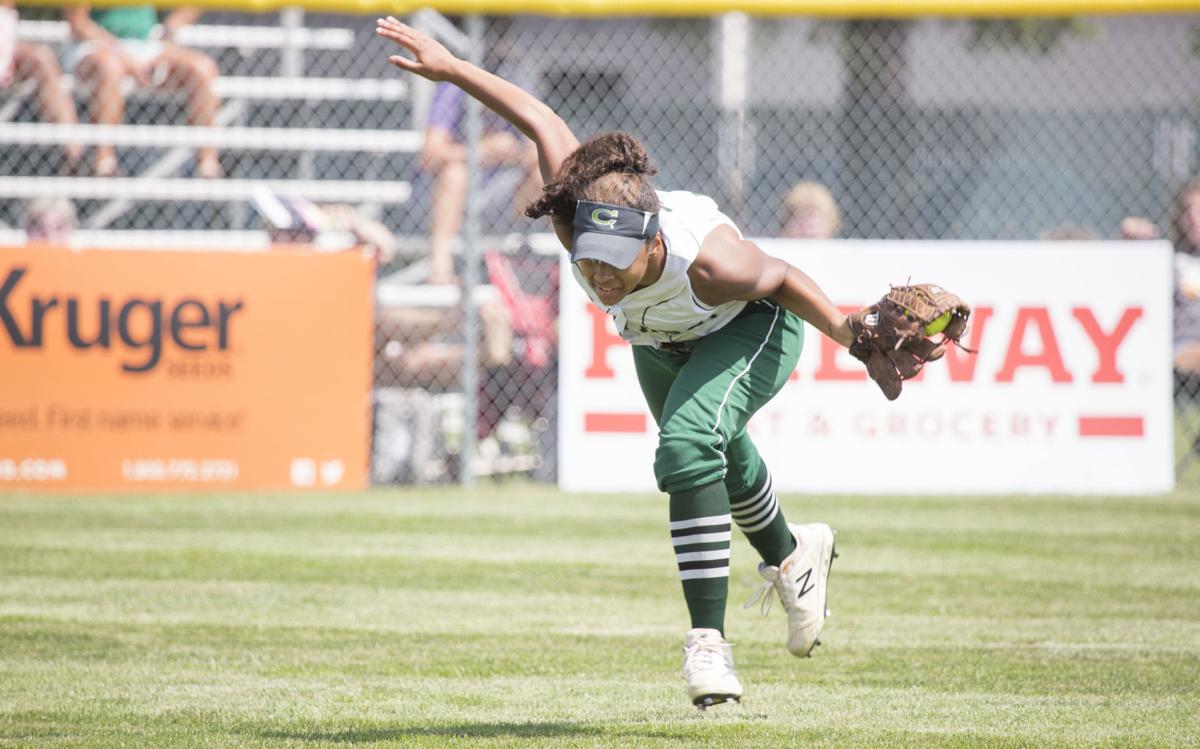 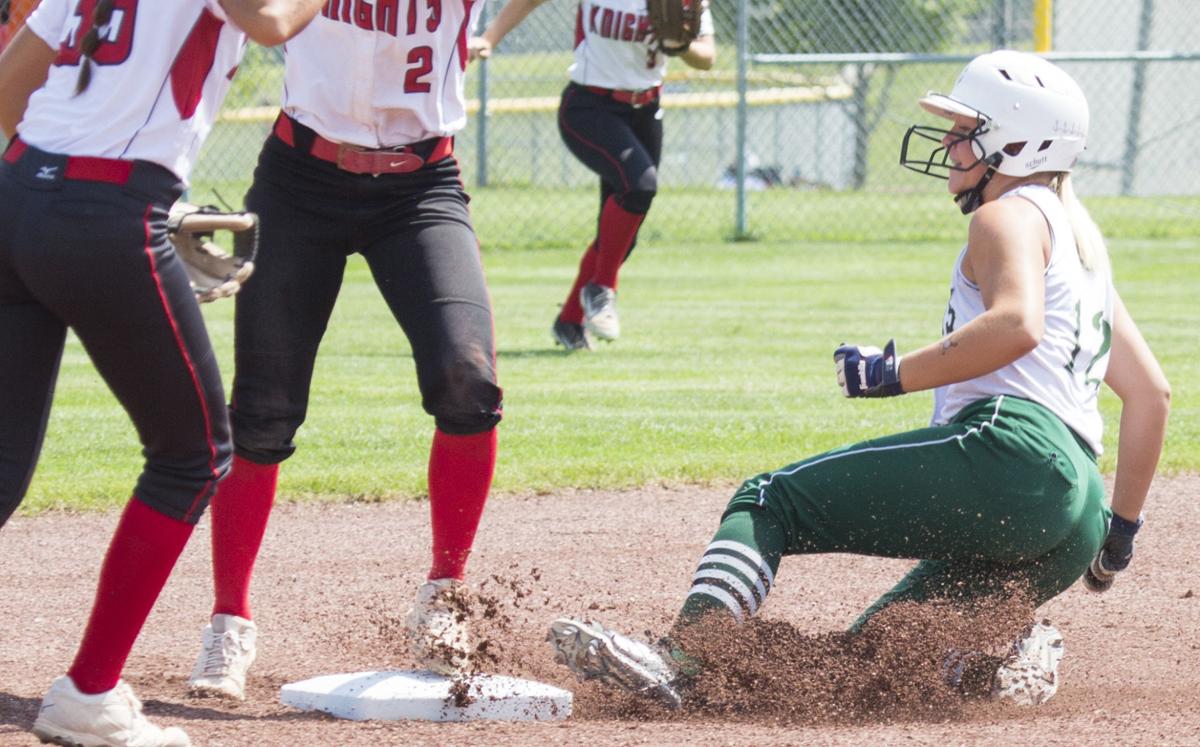 Alivia Schultz of Waterloo Columbus slides into second base during Wednesday's Class 3A state softball semifinal against Davenport Assumption.

Class 3A’s top-ranked team showed no signs of weakness, breaking open a one-run lead with a three-run fifth inning and two more in the sixth en route to a 6-0 victory at Rogers Park. Knights’ pitcher Allie Timmons allowed just three hits with eight strikeouts and one walk as she secured her 40th consecutive victory dating back to early last June.

“We knew we had our hands full today. We had confidence going into the game that we could beat them and things didn’t roll our way.”

Part of Assumption’s key to success on defense came with the manner in which the Knights navigated the top of Columbus’ lineup. Leadoff hitter Taylor Hogan, who entered the game with a .674 on-base percentage, finished 0-for-3, including a two-out fly to deep left after Reagan Lindsay’s bunt single in the top of the fifth inning.

“We had a good opportunity there and she just missed it,” Olmstead said. “He (Assumption coach Ron Ferrill) made a good defensive move on that very pitch because he moved his left fielder back. If he hadn’t done that, that ball probably falls and we’re looking at a tie ballgame at that point in time.”

Aside from Lindsay, Columbus’ No. 2 hitter Alivia Schultz was the only other Sailor to record a hit. Schultz singled in the first inning and doubled to the left-field gap in the third before her sister Sydney Schultz flew out to left to end that threat.

Assumption’s potent lineup plated a run in the bottom of the first when leadoff hitter Lea Nelson singled, stole second and scored on Anna Wohlers’ single to right. Hogan doubled a runner off first with a catch and throw from shortstop to prevent further damage that opening frame. Jalila Hart then made a run-saving catch in shallow center field to keep the Knights off the scoreboard in the second.

Assumption’s three runs in the fifth inning came after runners advanced following errors. Hard-hit singles from Nelson and Olivia Wardlow skipped past Little in center before Wardlow stole third and scored on the errant throw. Hogan lost a ball in the sun at shortstop that led to two more runs in the sixth inning.

Wardlow finished 4-for-4 and Nelson added three of Assumption’s 12 hits.

“I knew it was going to be a big challenge, and their pitcher was great,” Columbus pitcher Kayla Sproul said of her counterpart. “She kept us off balance and knew what to throw. They hit the ball and we didn’t make the plays. The score shows 6-0 but I think it could have been a lot closer game. We just didn’t play our best.”

This marked the 200th game together over the course of five years for Columbus seniors Sproul, Hogan, Hart, Sydney Schultz, Maliyah Little and Emma Borman. The Sailors are 168-32 over that stretch with five conference titles and three state tournament appearances.

Columbus’ season will conclude at 2:30 p.m. Friday in the third-place game against West Liberty.

When Olmstead took over Columbus’ job six years ago, he had only a couple of upperclassmen and pointed to a sophomore class of Brooke Craig, Emma Shannon and Sydney Hogan as a group that built a foundation that his current senior class turned into a home.

State softball: Cardiac Comets walk off with a victory

It didn’t come easy. On the verge of charting new territory, the wind was taken out of the Sailors’ sails with one swing of the bat.

On the first pitch she saw, Bailey Myers hit a soft line drive to right center that easily plated Emma Poppe for the only run in a 1-0 victory over the Lions (33-7) advancing Clarksville (34-1) to Thursday's 6 p.m. state championship game against Collins-Maxwell.

Cedar Rapids Xavier was all business Wednesday as the top-ranked Saints rocked Charles City 17-2 in a Class 3A substate final to earn its first trip to the state tournament since 2013.

The Spartans defended their state title with an intense, 4-3 win over Clarksville.

Alivia Schultz of Waterloo Columbus slides into second base during Wednesday's Class 3A state softball semifinal against Davenport Assumption.