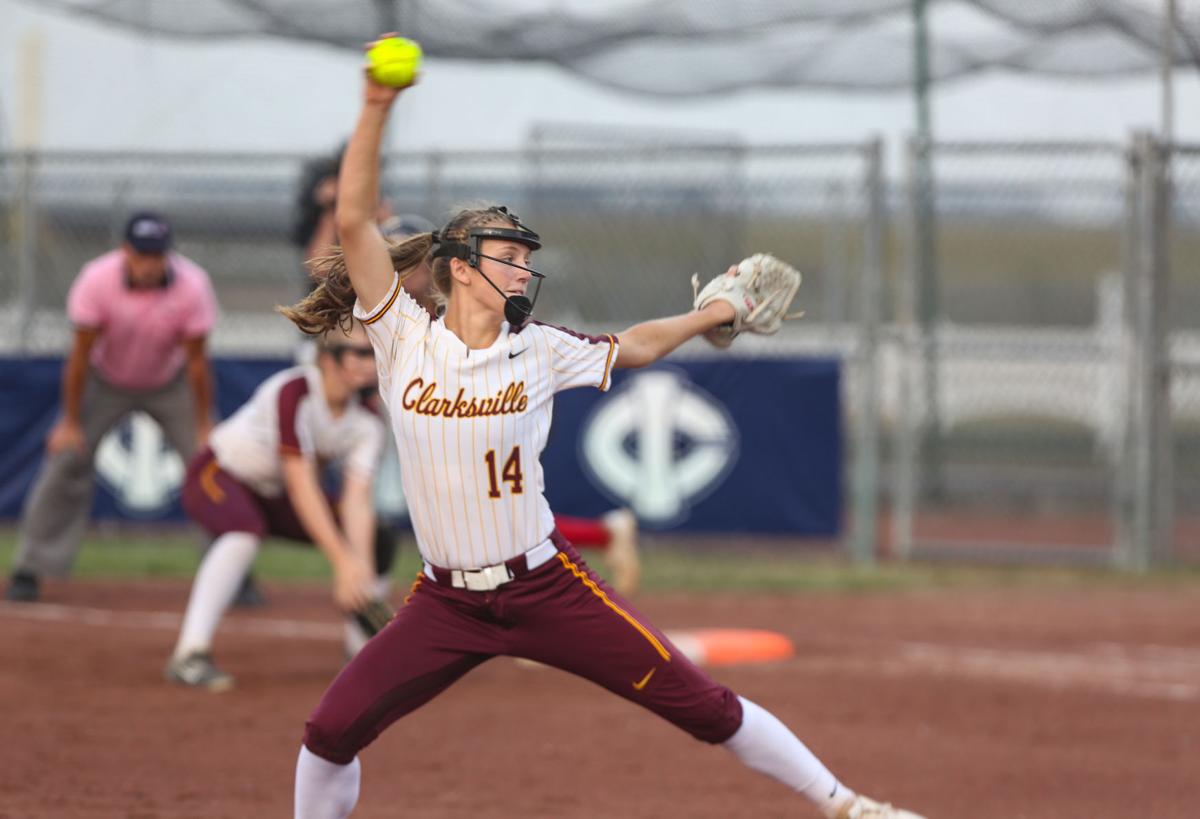 Senior Kori Wedeking pitches against Lisbon at the state semi-finals on Wednesday. 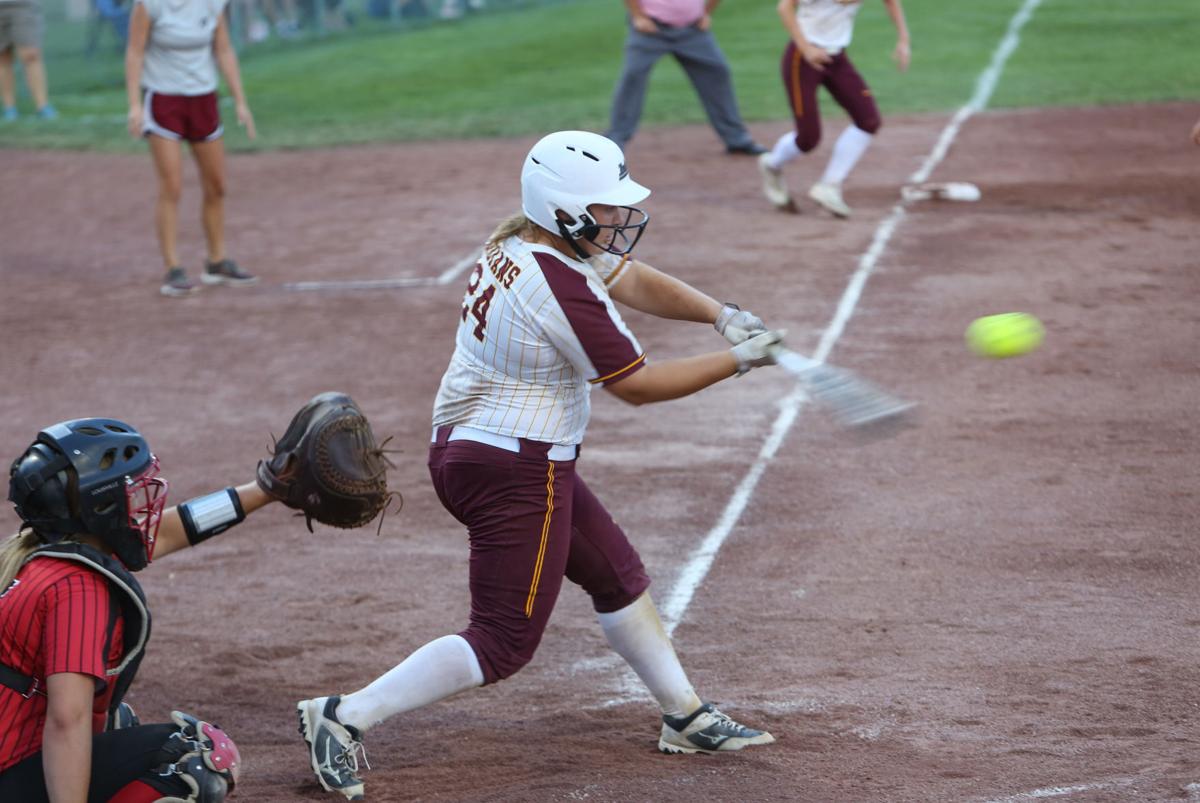 Clarksville's Ainsley Lovrien connects with a pitch by Lisbon at the state semifinals on Wednesday. 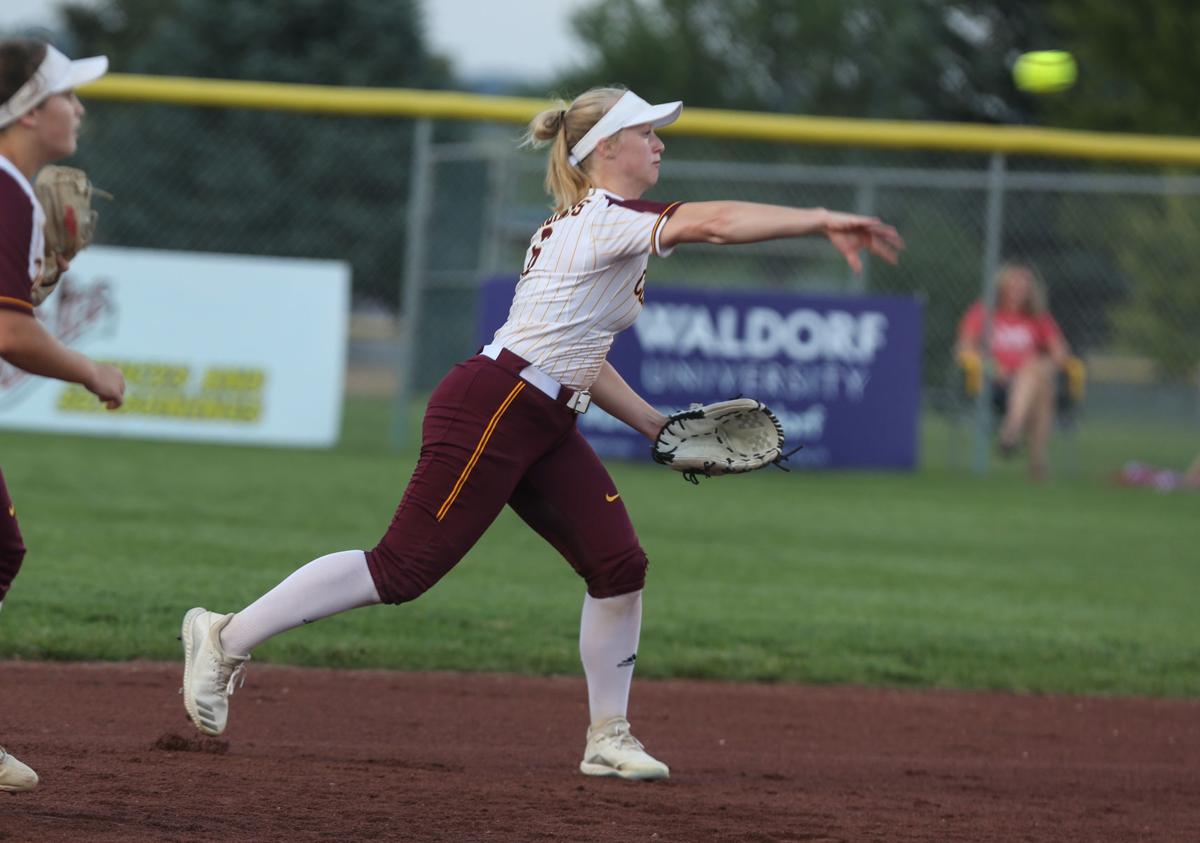 Senior Chloe Ross throws the ball to first at the state semi-finals against Lisbon on Wednesday. 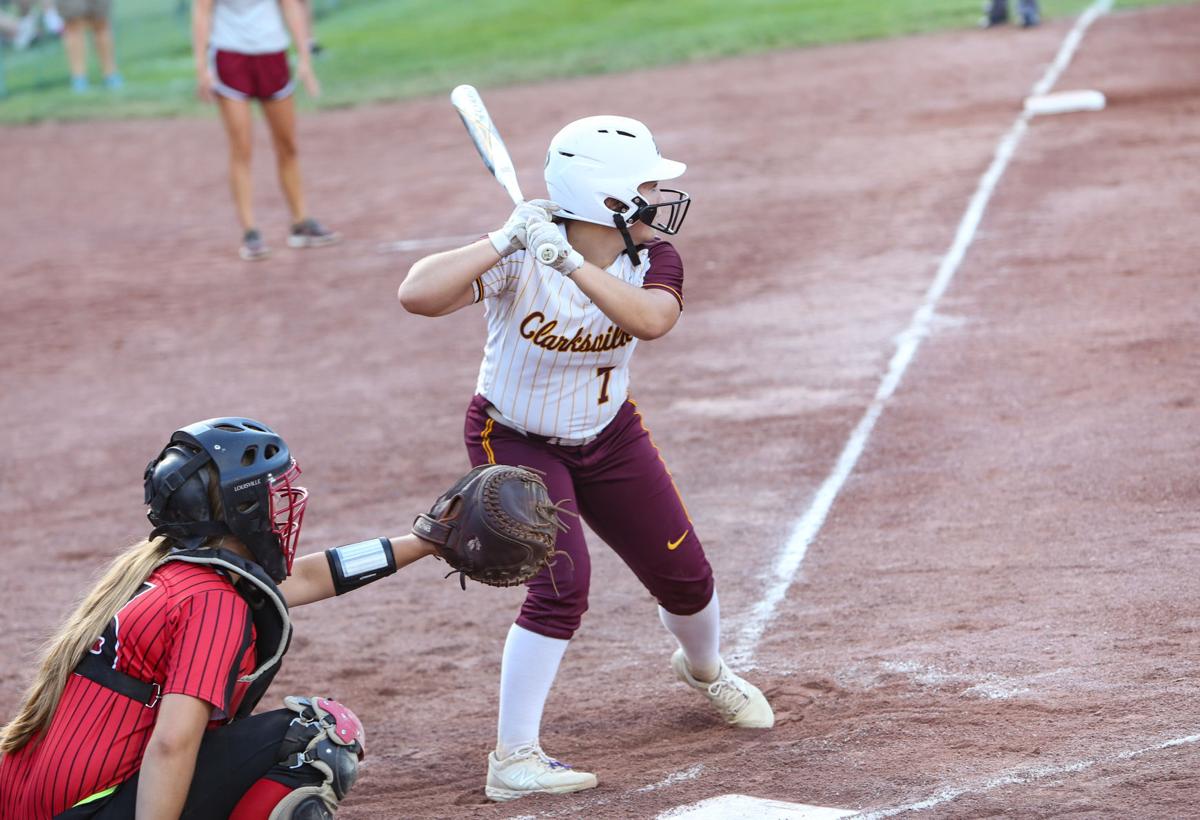 Cheyenne Behrends bats against Lisbon at the state semifinals on Wednesday.

Fortunately for Clarksville, its defense was flawless the remainder of the way.

In a rematch last year’s state semifinal, the Indians rode their solid defense and timely hitting to beat Lisbon, 4-0, at Harlan and Hazel Rogers Sports Complex. Clarksville advances to Friday’s 7:30 p.m. championship game where it will get another shot at defending champion Collins-Maxwell in a rematch of last season’s title contest.

It was a much more relaxed feeling for the Indians afterward Wednesday night. Especially one night after they needed a Cheyenne Behrends’ inside-the-park home run to beat Akron-Westfield in eight innings.

“It was nice not to have to worry the whole game whether we were going to win,” Behrends said. “We are probably going to sleep a little better tonight.”

Twenty-four hours after an error opened the door to a four-run first inning for Akron-Westfield, Clarksville threw wildly to put the leadoff runner on base for Lisbon (21-4).

“That first error, I was like, ‘Oh, not again,’” Clarksville head coach Katie Wedeking said. “But our defense was much more solid tonight. We knew Lisbon could hit and they had good pitcher so we couldn’t give them anything.”

Clarksville’s standout pitcher Kori Wedeking struck out the next three to erase the first-inning error and was crisp and efficient the rest of the way, including a three-pitch, three-up, three-down inning in the fifth.

“Our defense was much better than it was last night,” Kori Wedeking said. “They were making plays left and right. I didn’t really have to strike anybody out because I knew they were behind me the whole time.”

Wedeking, who has more than 1,000 strikeouts in her career, struck out just two more batters after the first as she got several nice defensive plays from Behrends at shortstop and a great diving catch by her catcher, Ainsley Lovrien, in the second.

In the third inning, Lisbon’s Peyton Williams singled with two outs, and Lions pitcher Ryleigh Allgood put down a great bunt for a hit. But Williams tried to make it to third and she was thrown out by Emma Poppe with Wedeking covering the bag.

State softball preview: Veteran Clarksville has taken nothing for granted

When Clarksville takes the field for Tuesday's state tournament opener, half of the lineup will consist of battle-tested seniors.

Lisbon threatened to score just twice after the first. Stacia Hall opened the fourth with a single and move to third on a sacrifice bunt and a ground out. But Wedeking induced a pop out for the third out. The only other threat she faced was back-to-back singles in the seventh with two outs from Kali Nelson and Sam Bennett. A soft fly to centerfielder Janet Borchardt ended the game.

“We played really good defense and that is what we are going to have to do again on Friday,” Behrends said.

The Indians got the only run they would need in the fourth inning.

Wedeking hit a rocket back through the box that Allgood knocked down. She scrambled and retrieved the ball, but threw low to first with Wedeking ending up on third as the ball went into the media box for a two-base error.

Lovrien followed with a sacrifice fly to center that easily scored Wedeking.

“I knew I couldn’t strike out or pop it up,” Lovrien said. “I was just looking to put it in play.”

“One run can go a long way in a state game,” Behrends said. “Especially if no errors are being made and both teams pitchers are dealing it really good. We got one run and we weren’t completely comfortable, but it was better than having no runs.”

The Indians added three insurance runs in the sixth.

With one out, Behrends singled to center and Janet Borchardt followed suit before Wedeking drilled a double to right center to score both. Lovrien made it 4-0 when her single to center scored Wedeking.

“Anything can happen in the seventh inning, so it was nice to add to our lead,” Kori Wedeking said.

Up next is another shot at Collins-Maxwell. The Spartans beat the Indians, 1-0, in last year’s state championship, and beat them already this year, 1-0, in a regular-season game. Furthering the sting, Clarksville lost 1-0 games to Collins-Maxwell in 2017 and 2018, too.

“We’ve lost 1-0. We beat ourselves every year,” Kori Wedekng said. “We can’t make any errors, got to get on the bats right away and I just have to hit my spots the entire game.”

“It feels amazing,” Lovrien added. “We are ready this time.”

On the first pitch she saw, Bailey Myers hit a soft line drive to right center that easily plated Emma Poppe for the only run in a 1-0 victory over the Lions (33-7) advancing Clarksville (34-1) to Thursday's 6 p.m. state championship game against Collins-Maxwell.

Regional softball: Clarksville heads back to state with 6-1 win over AGWSR

Jenna Myers blasted a two-run homer to left field to highlight a four-run fifth inning as the No. 3 Clarksville overcame a slow start to down No. 14 AGWSR 6-1 Monday night, in a 1A regional final.

Senior Kori Wedeking pitches against Lisbon at the state semi-finals on Wednesday.

Clarksville's Ainsley Lovrien connects with a pitch by Lisbon at the state semifinals on Wednesday.

Senior Chloe Ross throws the ball to first at the state semi-finals against Lisbon on Wednesday.

Cheyenne Behrends bats against Lisbon at the state semifinals on Wednesday. 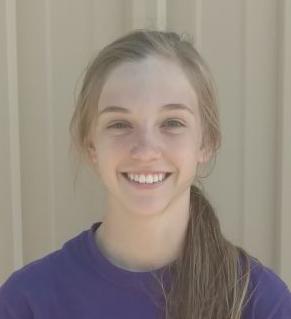