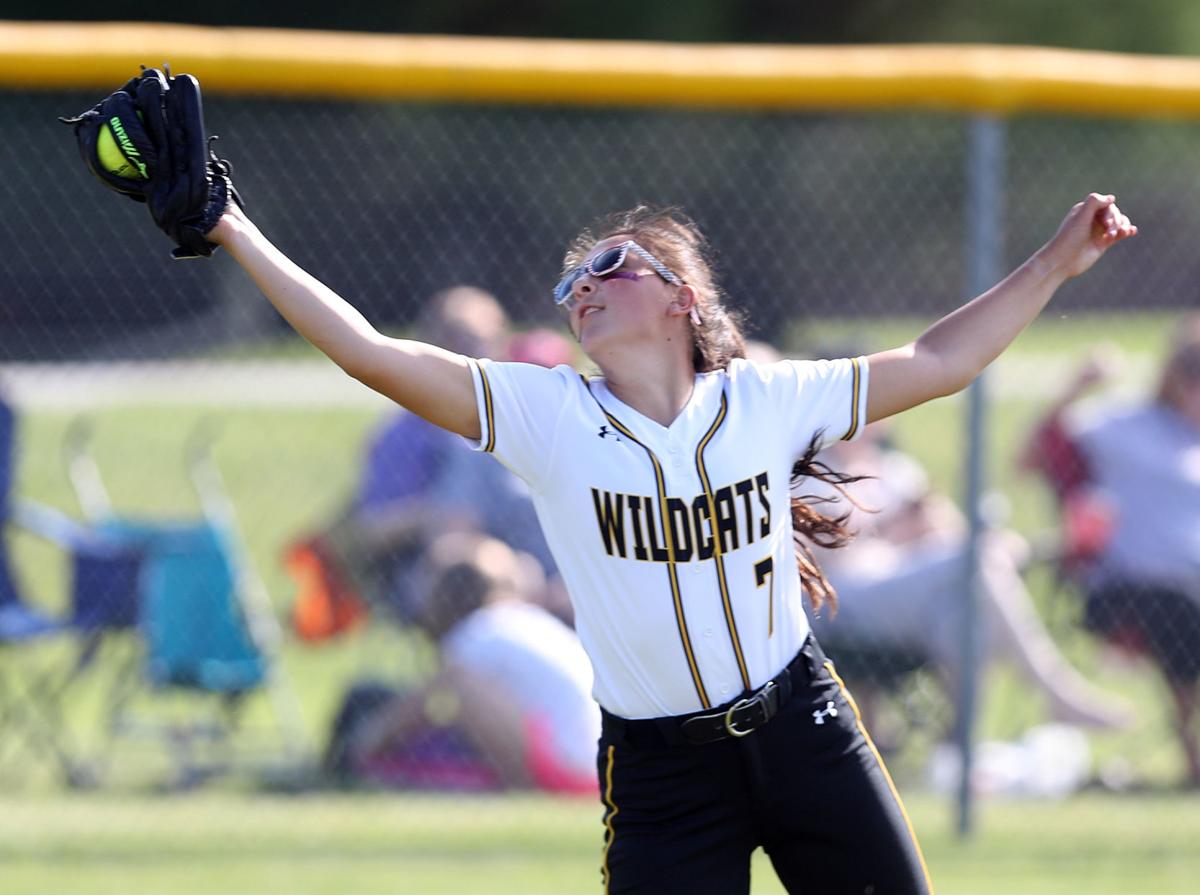 Janesville's Kamryn Umthum stretches for an out against Clarksville Wednesday in Janesville. 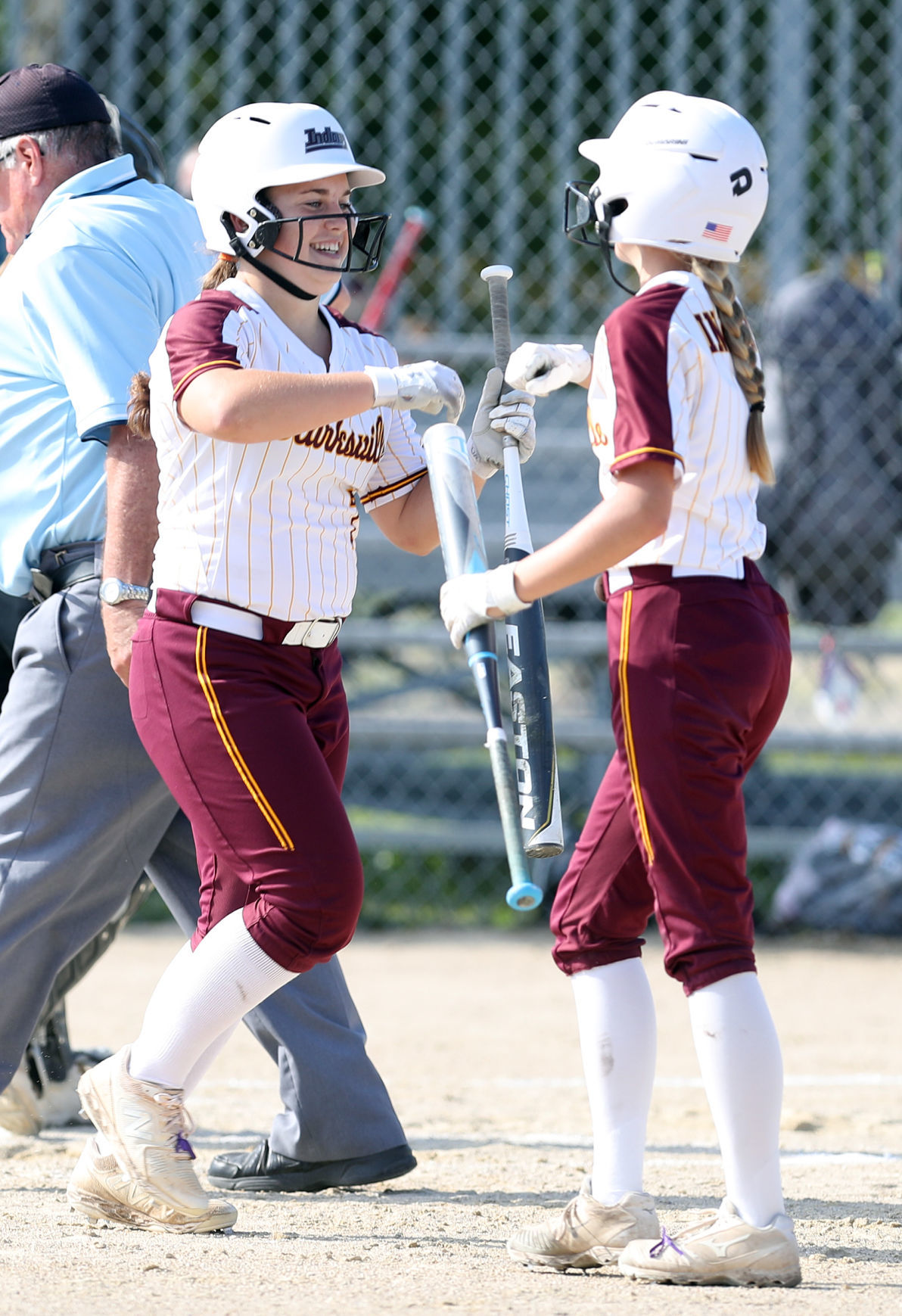 Clarksville's Cheyenne Behrends gets a fist bump from Cailyn Hardy after hitting a home run against Janesville Wednesday in Janesville. 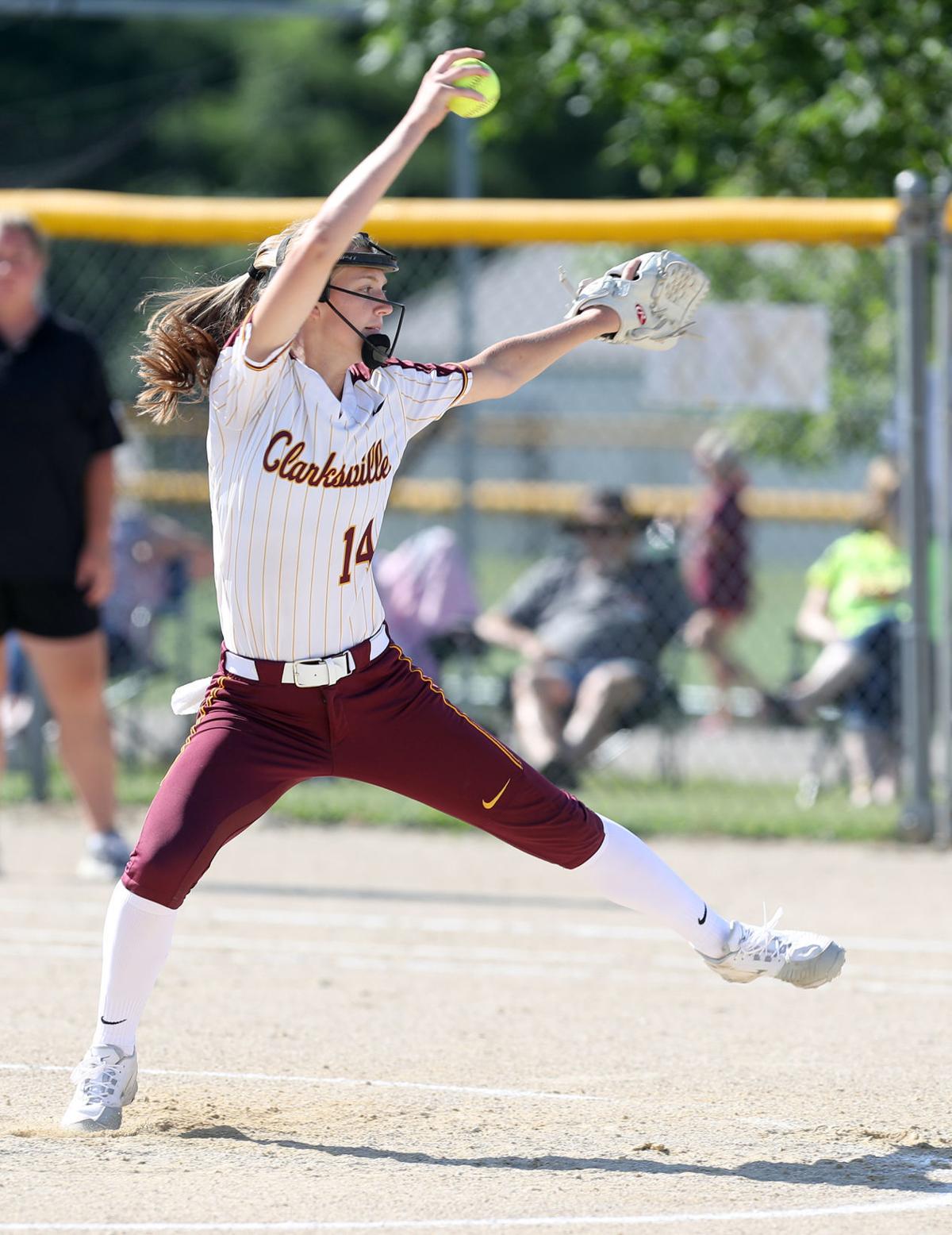 Clarksville's Kori Wedeking winds up a pitch against Janesville Wednesday in Janesville. 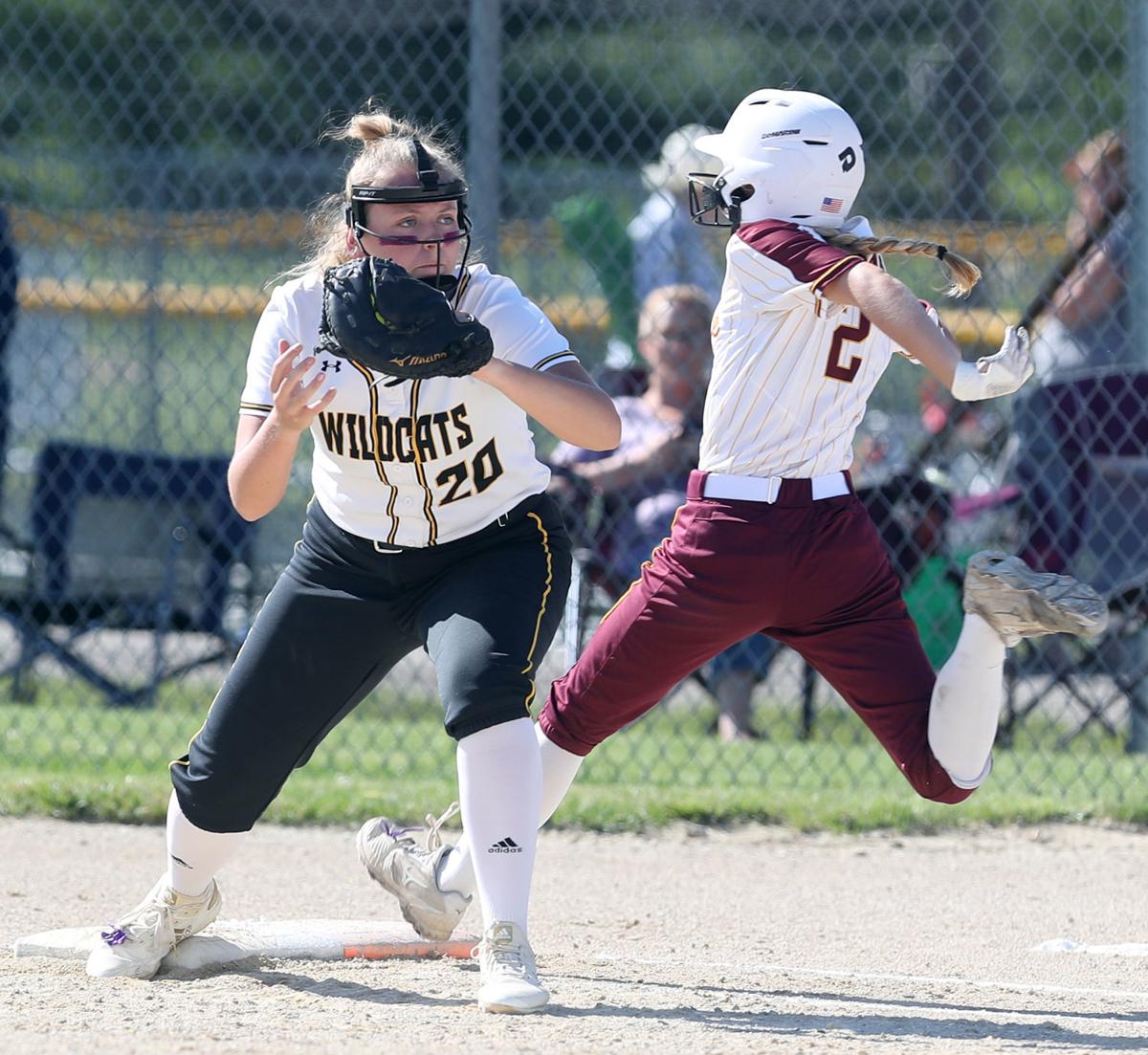 Janesville's Chloe Kiene makes the catch for the out at first on Clarksville's Cailyn Hardy Wednesday in Janesville.

JANESVILLE — As Janesville Wildcats coach Shelly Sorensen walked off the field Wednesday night, all she could do was shake her head.

Not at the effort given by her team which was admirable, but more at her opponents’ weaponry, namely Kori Wedeking.

The hard throwing pitcher from Clarksville had just wrapped up a one-hit shutout of their Iowa Star North rival, 14-0, while striking out 16 batters in the process.

“Wow, she is good,” Sorensen said of Wedeking. “She had good control all night and worked it. We battled her hard but she just flat out beat us and she earned it.”

Wedeking struck out the first eight Wildcats she faced before surrendering a high pop up that ended the third inning in third baseman Cailyn Hardy’s mitt.

Janesville’s shortstop, Pyper McCarville touched Wedeking for a single to begin the fourth frame, but she would move no further as Wedeking struck out the side, and then fanned the first two batters in the fifth.

“I haven’t pitched for a few days so I really wasn’t sure what would happen,” Wedeking said. “I just went into my motions to start the game and everything was working.

“I knew if we could get a couple of runs that our defense would hold them down, since they are so strong and very rarely make any errors. We were able to put it all together tonight and got a lot of help from the offense.”

The Clarksville bats began to dance in the third inning as they waltzed a pair of runs home from a wild pitch and an RBI single by Ainsley Lovrien.

After picking up another pair of runs in the fourth stanza, the Indians were able to put more distance between themselves and the Wildcats with three in the fifth. The biggest blow came off Emma Poppe’s bat when she stroked a long double that plated two runs.

Lovrien picked up her third and fourth RBIs over the final two innings ending a three-for-three night at the plate and punching home three runs.

“We are a well rounded team here and we can hit the ball well all through the lineup,” Lovrien said. “I was able to see the ball pretty well tonight and although I would have liked to get a hit in my two last at bats, I at least drove in some runs with the deep fly ball.

“That is what it is all about, not me getting on base, but hitting the ball hard enough that my teammates can score. We just need to stay solid all year and I don’t think anyone can beat us, except ourselves.”

The Indians have made all the right moves so far this season as they sit atop the conference with a perfect 3-0 record and are 5-0 overall.

“We struggled our first game of the year and I think that was mainly first game jitters,” said Clarksville’s coach Katie Wedeking. “We came into the game wanting to be on our bats and we have 10 girls that can hit it.”

Eight of the nine starters recorded hits in the game with Lovrien and Behrends recording three each. Behrends had a pair of doubles and a triple at the plate.

“It is good to dominate a game,” Katie Wedeking said. “I think our seniors are really driven this year due to the shortened season and they want to cherish each and every moment. They go out there in practice and push the younger players and make them better. It is just a solid group all the way around.”

The Indians’ lineup is deep as the bottom of the order went six of 10 with seven RBIs. Jenna Myers put a little icing on the cake from the number nine slot with a three-run homer in the seventh frame.

Janesville's Kamryn Umthum stretches for an out against Clarksville Wednesday in Janesville.

Clarksville's Cheyenne Behrends gets a fist bump from Cailyn Hardy after hitting a home run against Janesville Wednesday in Janesville.

Clarksville's Kori Wedeking winds up a pitch against Janesville Wednesday in Janesville.

Janesville's Chloe Kiene makes the catch for the out at first on Clarksville's Cailyn Hardy Wednesday in Janesville.