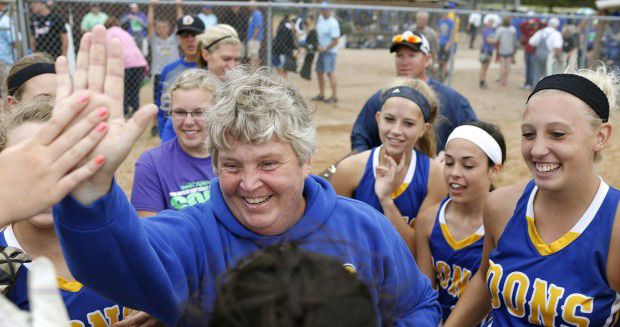 Don Bosco softball coach Jane Becker celebrates with her team after the Dons won the Don Bosco Invitational in 2013. 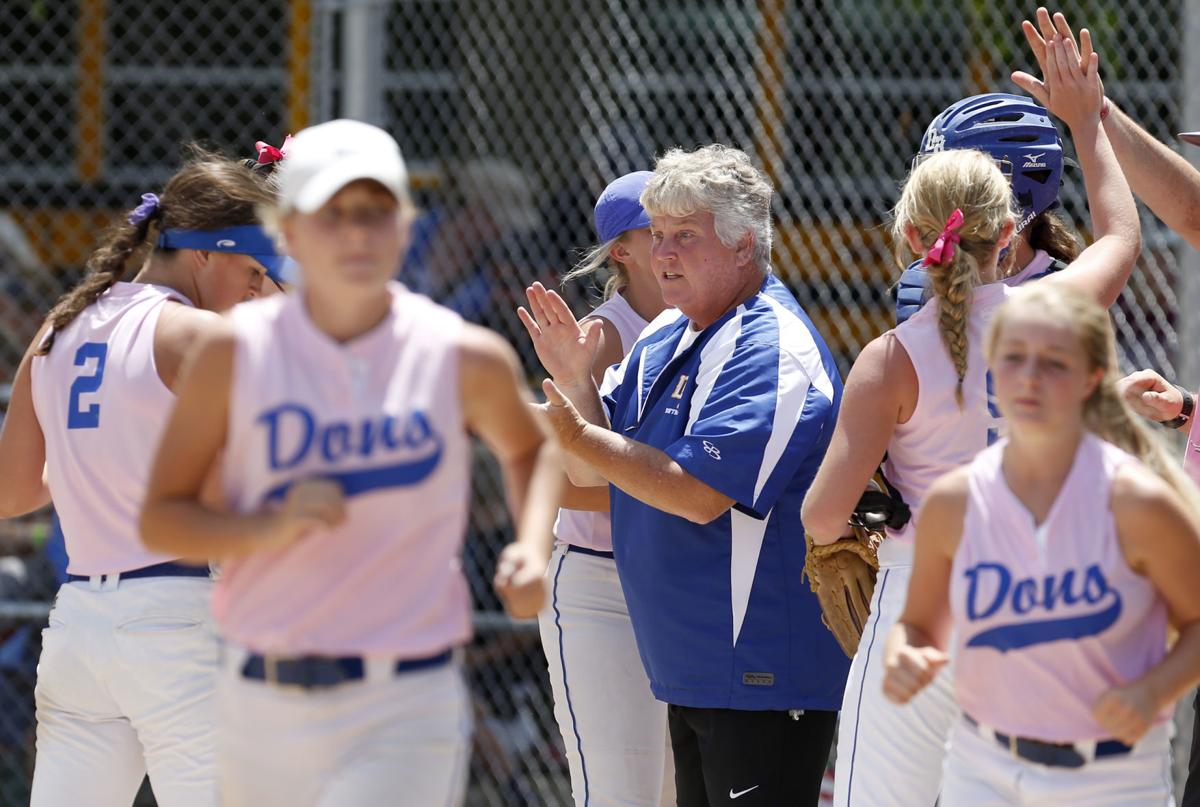 Don Bosco coach Jane Becker encourages her team during the Don Bosco Invitational in Gilbertville in 2017. 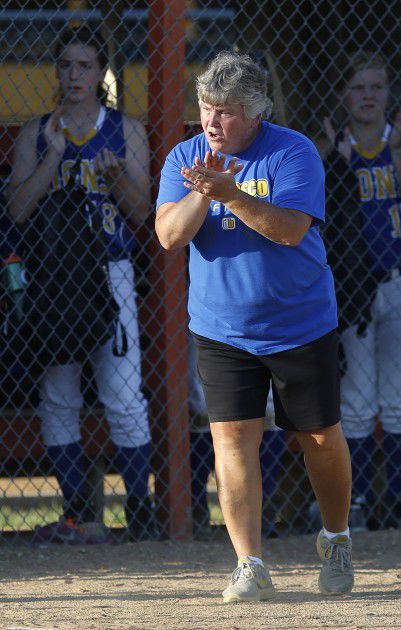 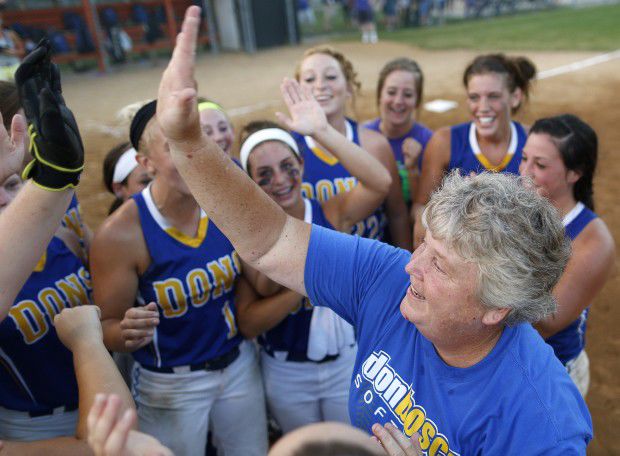 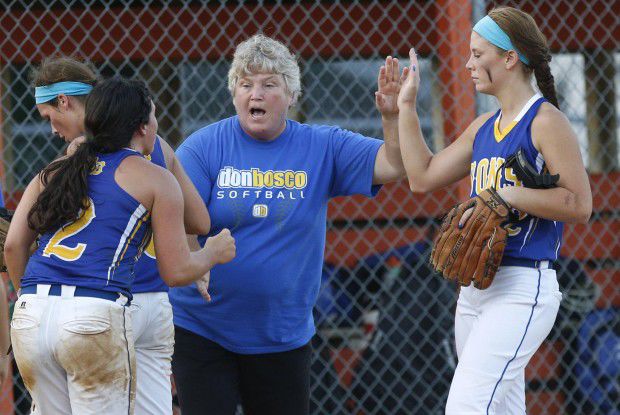 But the wear and tear of pacing the baselines on the Don Bosco of Gilbertville softball field for nearly four decades was finally catching up.

Total knee replacements last year slowed Becker during the 2019 season, and while that wasn’t the deciding factor, Becker has announced that after 34 seasons she has stepped down as the Dons’ head coach with more than 900 career wins and eight state tournament appearances.

Becker’s overall record is 948-417, ranks 23rd all-time in career wins in Iowa history, and she never had a losing season in any of her 34 years.

“Maybe a year or two ago,” Becker said of when she began to think of retiring. “It has been fun. But I said when the wear and tear on the body both mentally and physically began to be a chore it would be a time. It feels right. It has been a good run.”

An Iowa Girls Coaches Association Softball Hall of Fame member (2018) and a University of Northern Iowa Athletics Hall of Fame member, the Sherill native joined Don Bosco’s staff as an assistant in 1982 after helping lead UNI to the 1982 NCAA softball championship.

“She told us a little bit ago she was going to resign and just said it was time,” said Don Bosco Athletic Director Tom Hogan. “I knew it was in the back of her mind, but just didn’t know for sure when she was thinking.”

“She’s had a lot of good years over the years and we’re thankful that we had her for as long as we have. I think she has done a pretty good job of relating to the kids,” added Hogan, who said the search for her replacement is on-going.

Becker served as Dan Mashek’s assistant for three years before taking over in 1986.

The first of her eight state appearances as a head coach came in 1993 and in 2000 the Dons’ took third in the then three-class state tournament. She would later coach her daughter, Brittany, in three state tournaments (2005-07), and she and the Dons made their last trip to Fort Dodge in 2015.

Perhaps her favorite team, however, may have been the 1984 squad that made the school’s first state tournament in the then one-class tournament. That team featured a ton of juniors and an eighth-grade pitcher. One of those juniors, was Rhonda Weber, who introduced Becker to her uncle, Leo, who Becker has now been married to for 34 years.

“They got us together,” Becker laughed.

There are a lot of great memories. The state tournament teams, coaching Brittany, listening to Leo serve as the public address announcer and getting razzed by her team when she got caught paying more attention to the adjacent baseball field when her sons Tony and Cory were playing.

“Lots of good memories,” Becker said. “It is always special to coach your own kids. With Brittany what was on the field stayed on the field and what happened at home stayed at home. At home we talked about what she could do, but that was it. There was also a lot good advice from her, too, which was insightful coming from the player’s perspective.”

As the weather warms up, Becker says the finality of her decision is beginning to set in. While she plans on doing some traveling, Becker adds she won’t stray far from the softball field.

“These last couple of days as the weather has gotten better … you know I drive by the fields every day, and then when I walk out of the school, it (the softball field) is right to my right,” said Becker, who will continue to work as Don Bosco’s librarian and technology coordinator. “It’s I should be getting it ready, working on it and stuff like that.”

And Becker leaves a program that she knows is in a good spot. The Dons return 14 players off a team that went 21-14 last summer.

“I plan on being around. I told the girls I will still be with them try to help anyway I can,” Becker said.”I wasn’t going to drop everything. They are great kids. There is a good group of kids coming in and the shelf is not bare.

“And the kids here, they work hard and put in the time to be successful. I’m so glad to have been here in a community that supports you like the Don Bosco community supported us.”

Becker also had one last message for her girls.

“We never had a losing season so I’ve challenged them to keep that tradition going,” Becker laughed.

Paup teaching his charges to be leaders

Panther defensive line coach teach his group to be the leaders on UNI's defense.

Panther quarterback room is not only young, but extremely talented

Samberg was a second round selection by Winnipeg in the 2017 NHL Draft.

Honors given to 2 UNI golfers

UNI's Hannah Bermel and Sydney Eaton have been named MVC First Team Scholar Athletes as announced by the conference office on Thursday afternoon.

Don Bosco softball coach Jane Becker celebrates with her team after the Dons won the Don Bosco Invitational in 2013.

Don Bosco coach Jane Becker encourages her team during the Don Bosco Invitational in Gilbertville in 2017.