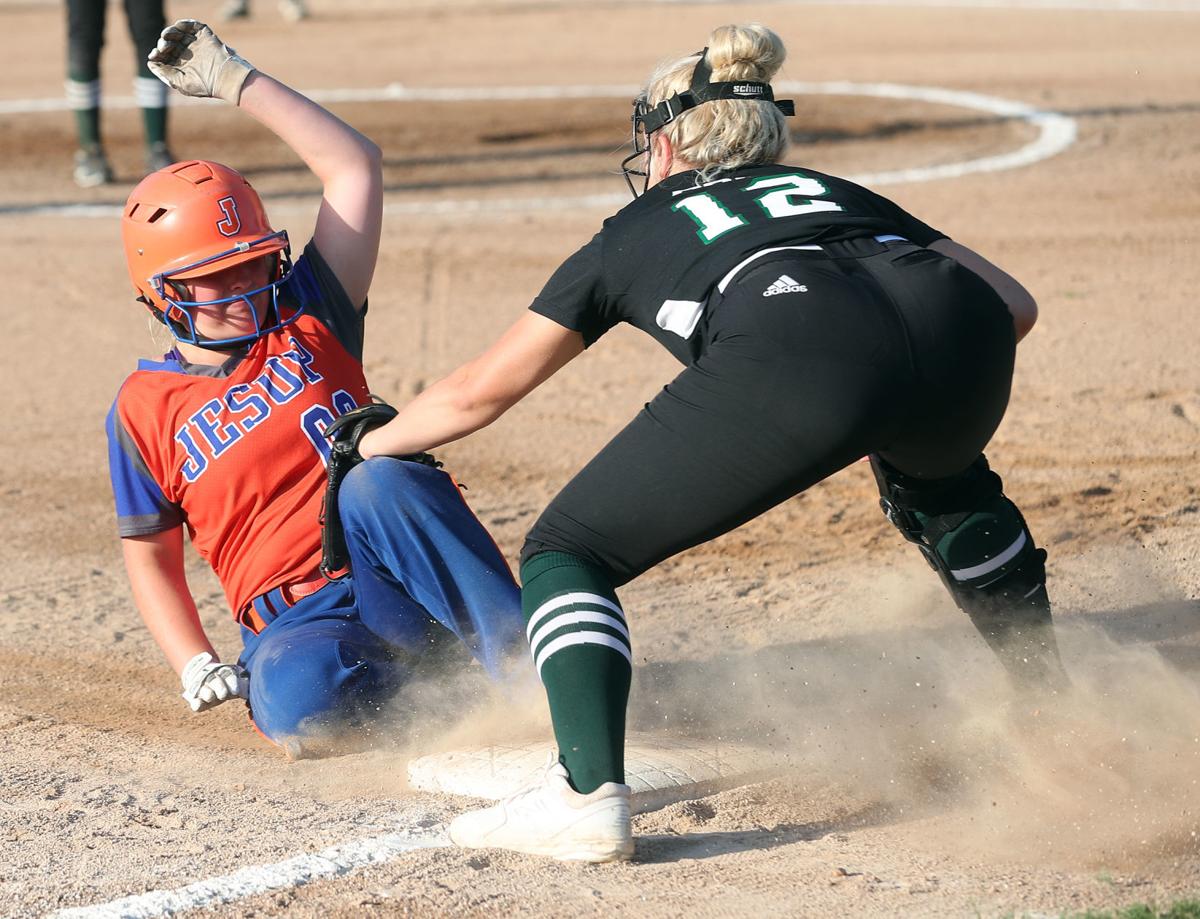 Jesup's Zoe Miller slides safe to third ahead of the throw to Columbus Catholic's Alivia Schultz on Monday in Waterloo. 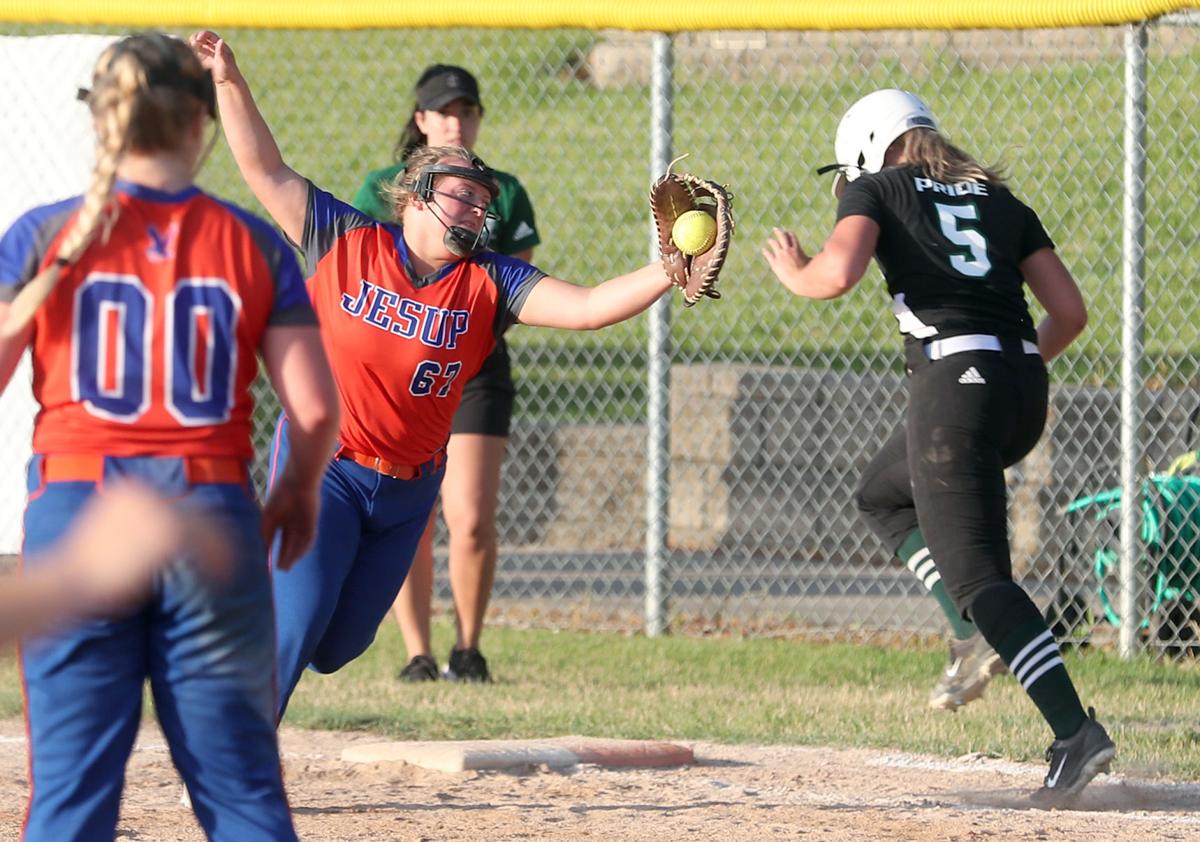 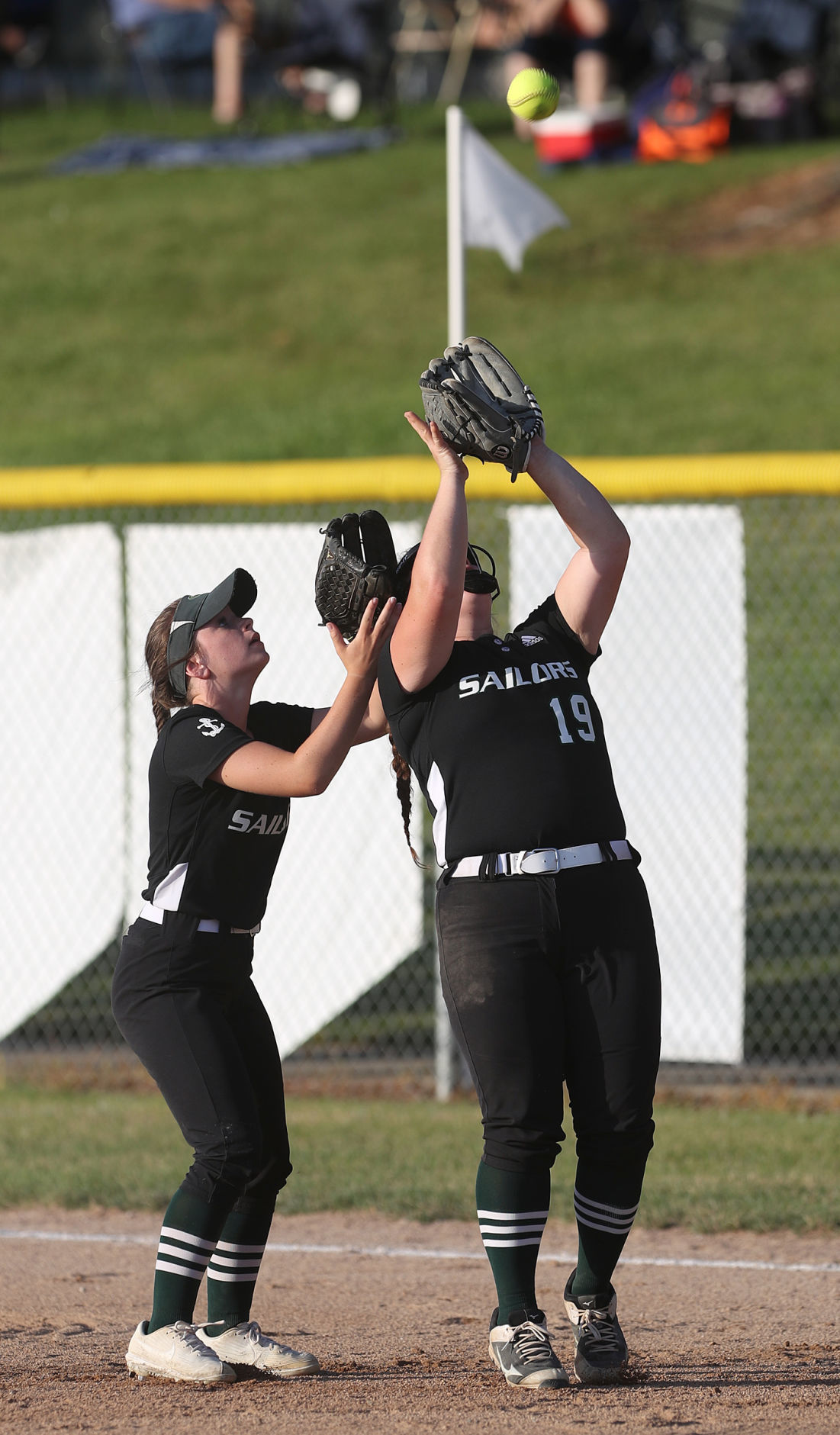 Columbus Catholic's Jenna Schott backs up Sophie Meier for the catch to end the inning against Jesup Monday, June 29, 2020, in Waterloo, IA. 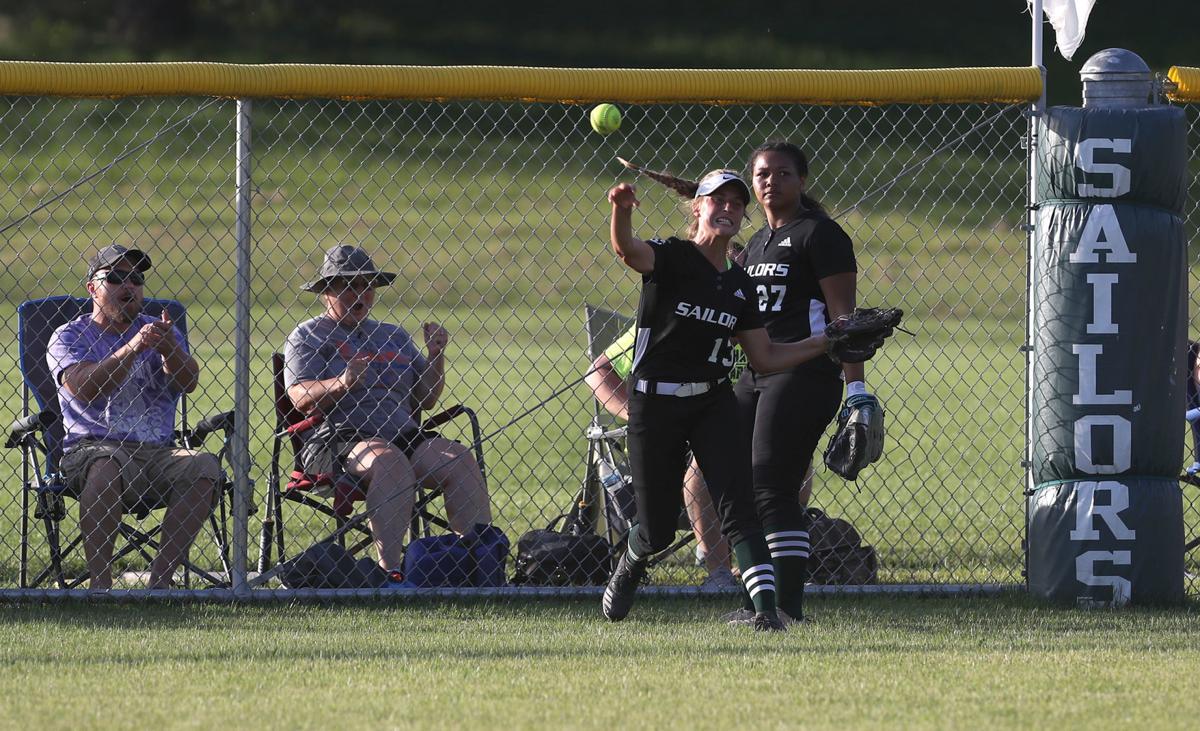 WATERLOO — Waterloo Columbus has been a perennial conference champion since joining the North Iowa Cedar League in 2014.

The Sailors have won at least a share of the last six championships — tying with Jesup for the 2017 crown after weather canceled their meeting at the end of that season. Prior to Monday night, Jesup was the last team to defeat the Sailors when the 2016 J-Hawks secured a victory over the league’s front-runner.

Featuring a veteran team with a potent lineup, Class 2A’s No. 4-ranked Jesup served notice to Columbus’ youthful team Monday that it is ready for a changing of the guard during a closely-contested battle at Columbus High School. Jesup sent 10 hitters to the plate in the top of the second inning, and that five-run frame proved enough to hold off a determined comeback attempt by Columbus during a 7-5 victory.

This road win followed a pair of 5-4 losses for a Jesup team that has relied on consistent hitting and solid fielding to support senior Zoe Miller, who often pitches to contact.

“It’s just a game that we needed,” said Rod Elson, who hadn’t defeated Columbus during his current stint with the J-Hawks since 2017 after previously coaching Jesup from 1988-2000. “We’re playing really good defense and we don’t have a dominating (strikeout) pitcher, so we have to put the ball in play and capitalize on our opportunities when we have them.”

Jesup certainly clicked when it had the chance in the second inning. Kristin Sadler opened with a double and scored on Hailey Nie’s single. Jacie Lange and Alexis Larson later broke the game open with back-to-back, two-run doubles for a 6-0 advantage.

“We just all needed to group together and all have team chemistry, and it showed,” said Larson, a sophomore catcher who reached base three times and tallied three RBIs. “We just really needed to dig deep down.

“Once someone gets a hit and we all string together it really helps with the score and builds character in our team. It’s nice to see.”

Columbus’ freshman pitcher Haile Frost settled in after Jesup’s big second inning and didn’t allow another run until Larson singled and came around to score on an error in the top of the seventh.

“Haile wasn’t hitting her spots, and it showed in the second inning,” Columbus coach Chris Olmstead said. “After that she was absolutely marvelous, just like she has been all year long. But it’s high school softball and you’ve got to be on every inning. She knows that, it’s just a matter of getting there and getting through those little things that can hurt you.”

Picking up the nuances of the game has been key for a Columbus team that graduated a large senior class and started five freshmen and an eighth-grader Monday.

The Sailors instantly rallied in the bottom of the second inning when Sophie Meier, Morgan Bradley and Avery Hogan opened with singles and came around to score on two RBI grounders and a fielding error. Alivia Schultz doubled and scored in the fourth inning, and pulled her Columbus team within a run when she waited on a change-up and doubled home Jenna Schott in the bottom of the sixth.

It was a third inning that proved costly for Columbus. The Sailors loaded the bases with one out before Jesup third baseman Lange fielded consecutive grounders to prevent a run from scoring.

Still, Olmstead left the field more encouraged by the potential his team displayed.

“I am a happy camper,” Olmstead said. “Obviously we want to win the game and it’s a big conference game — everybody knows that us and Jesup is a big rivalry for conference.

“I am so damn proud of these kids the way they reacted and responded and the leadership we got from the upperclassmen. … Jesup is a good team, and they (Columbus) could have just rolled over down 6-0. They just kept pecking away, pecking away, and it was awesome to watch.”

While Jesup’s Elson says there’s still room for his team to improve, experience could ultimately allow these J-Hawks to return to the top of the NICL.

“We have a bunch of experience with four seniors,” Larson said. “We’ve all played together for a really long time. The experience and leadership has really helped us.”

BreAnn Olsson was strong in the circle, and Brianna McPoland delivered a game-winning hit for the Wahawks.

Sailors tally five runs in the seventh inning to secure a dramatic victory.

Jesup's Zoe Miller slides safe to third ahead of the throw to Columbus Catholic's Alivia Schultz on Monday in Waterloo.

Columbus Catholic's Jenna Schott backs up Sophie Meier for the catch to end the inning against Jesup Monday, June 29, 2020, in Waterloo, IA.