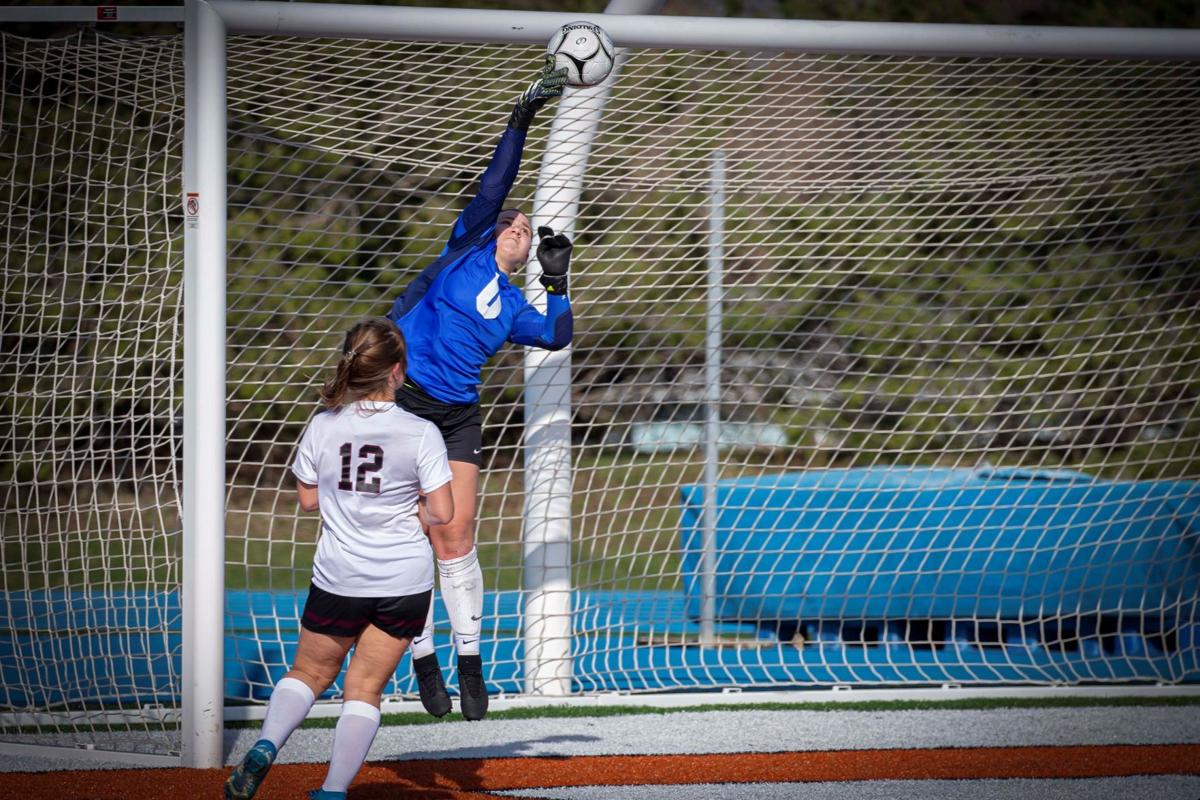 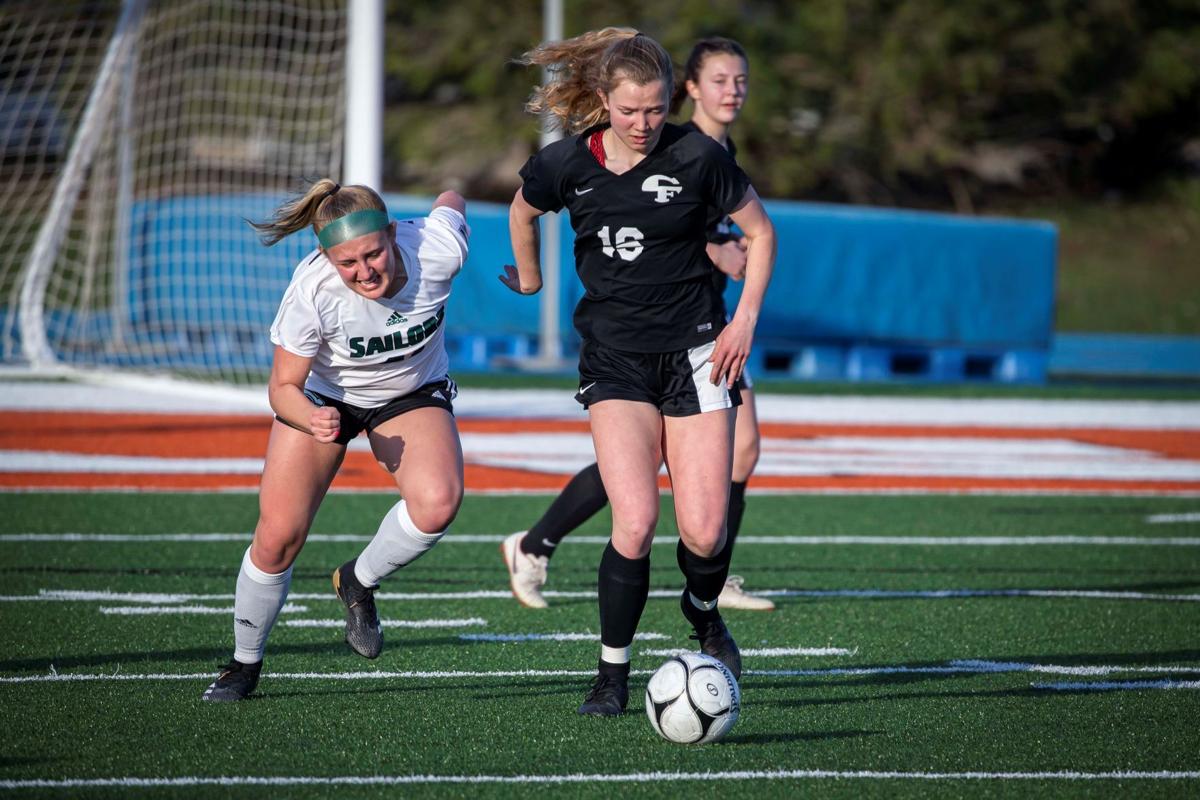 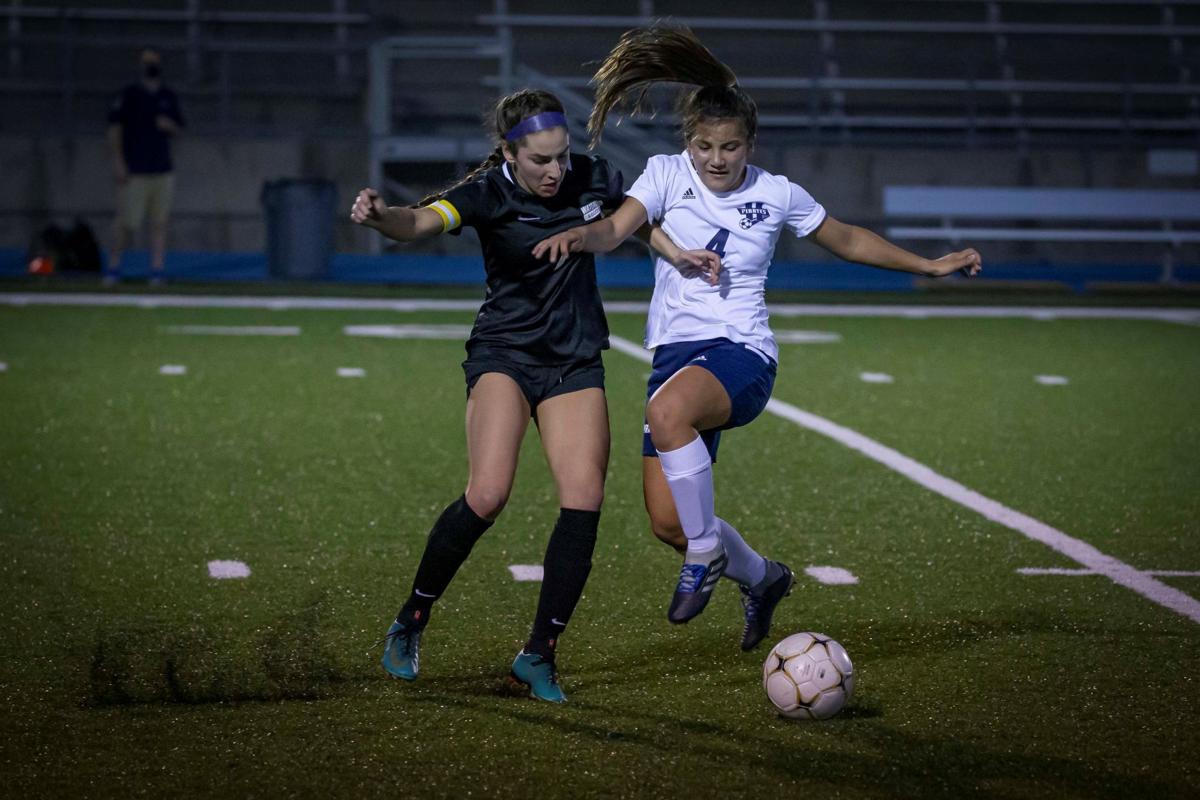 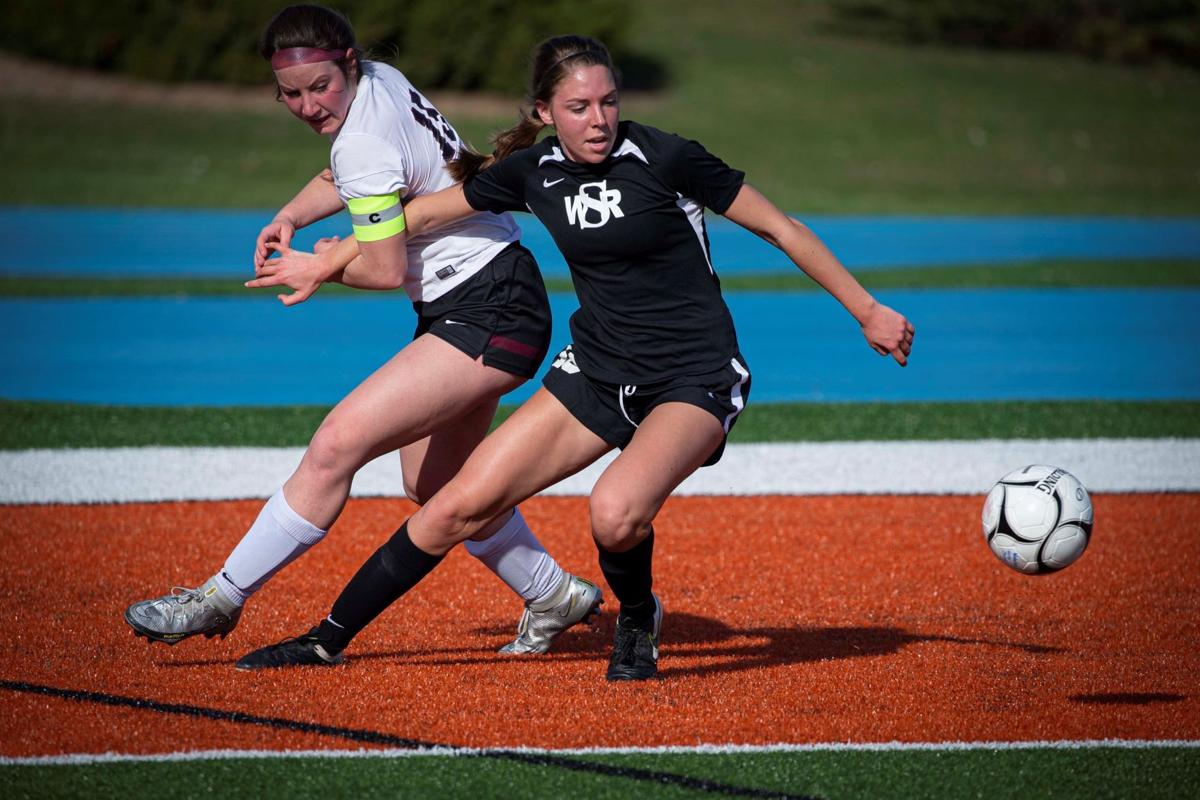 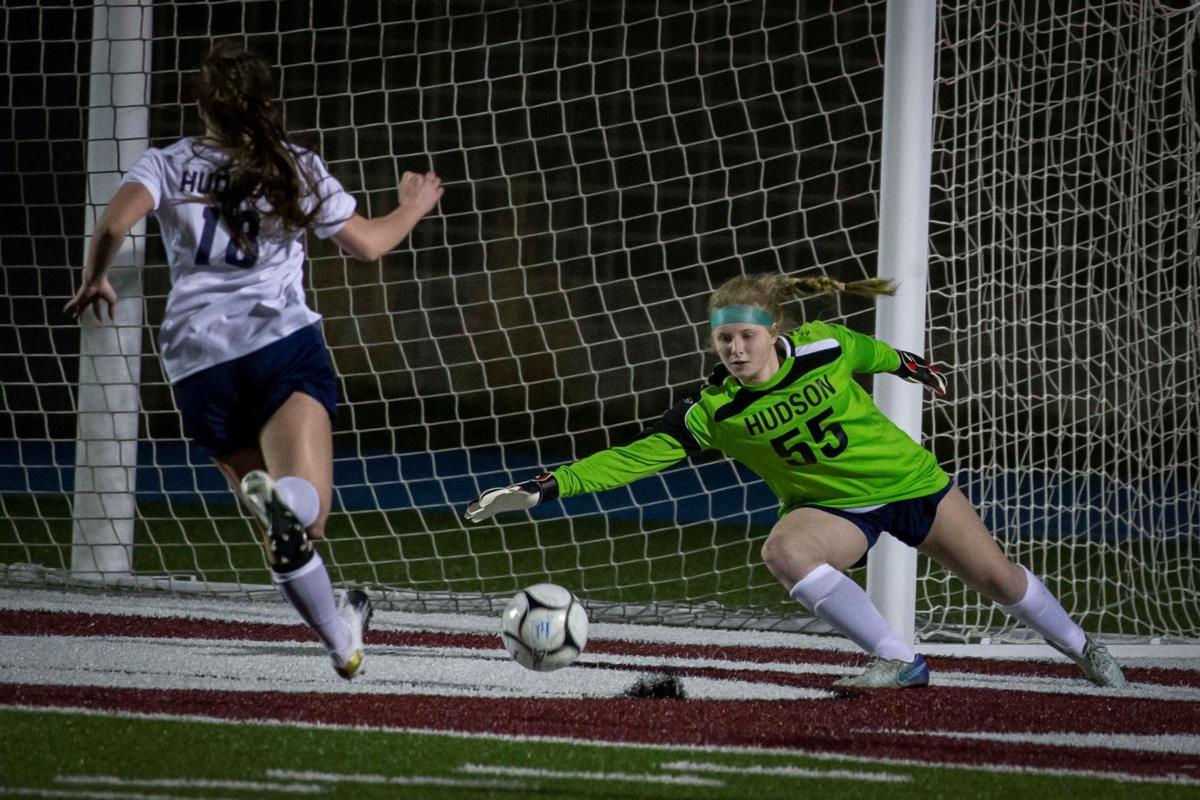 Hudson goalkeeper Anna Haskovec (55) dives to make a save against Waterloo Monday during the area girls' soccer jamboree at Memorial Stadium. 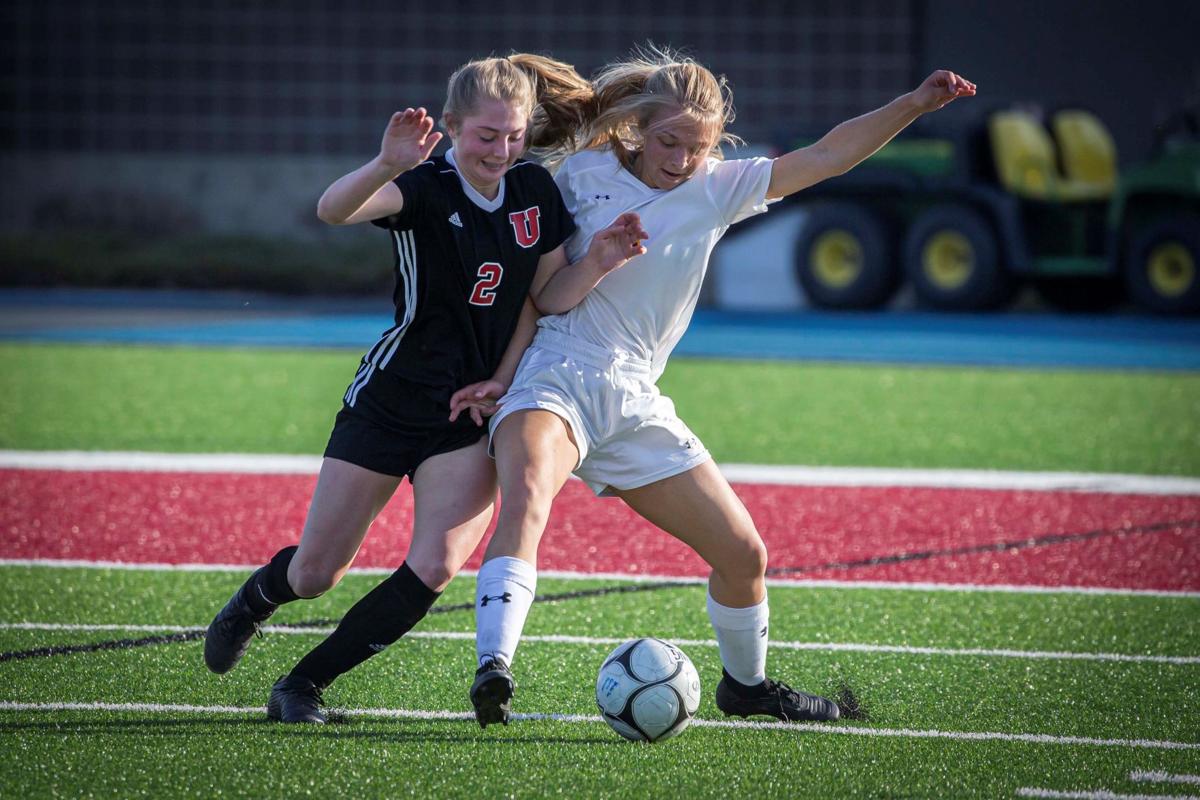 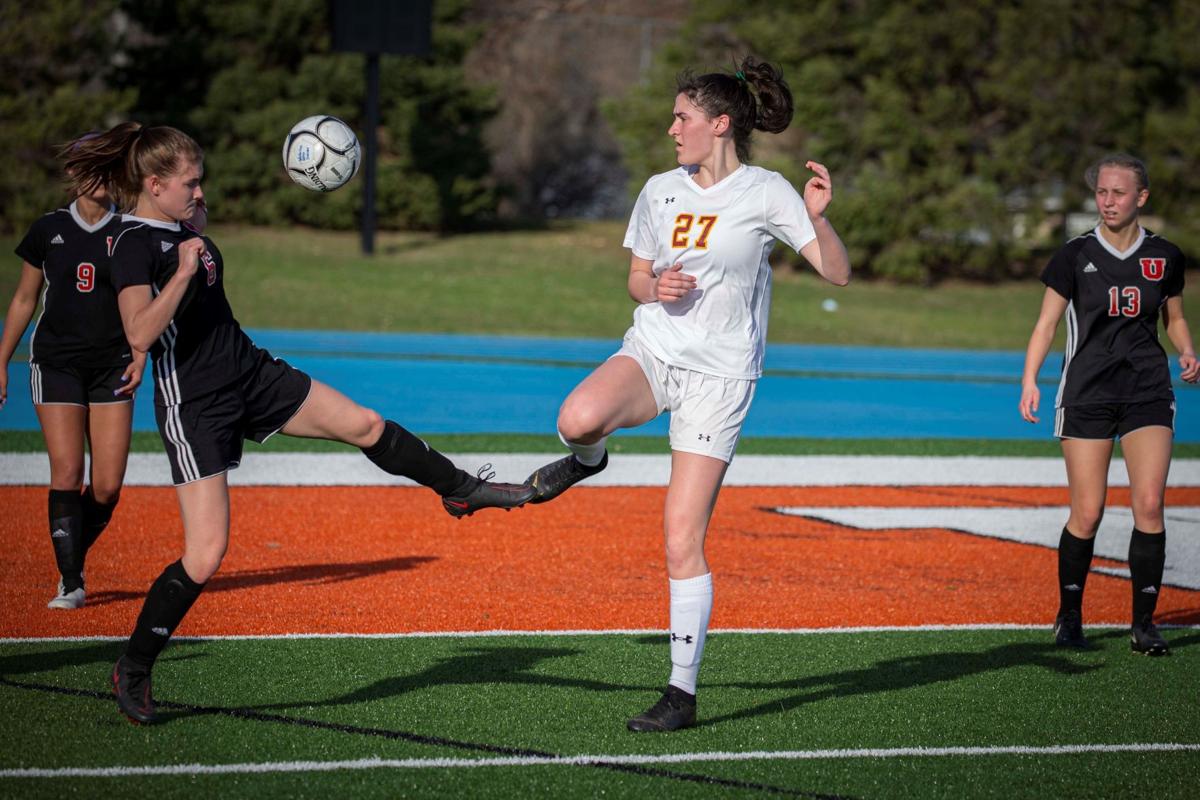 WATERLOO – Members of Waverly-Shell Rock’s soccer program were starving for competition together after their most recent match ended with a 2-1 loss to Cedar Rapids Xavier in the 2019 state final.

The Go-Hawks feasted from the opening horn at Monday night’s metro girls’ soccer jamboree against Independence, controlling possession and frequently finishing inside the attacking third during a dominant 11-0 victory.

“We were looking forward to last year,” Waverly-Shell Rock coach Lauren Greiner said. “We had a strong senior class and it was really unfortunate that they weren’t able to finish out their senior year like they wanted.

“I think that’s even made us more hungry this year. The girls really missed out last year. They’re such passionate kids that really love the game.”

In the second game of the jamboree Denver defeated 2019 state qualifier Union, 1-0. Waterloo Columbus and Cedar Falls played to a scoreless draw in the third game. Waterloo finished the evening with a 2-1 win over Hudson.

For Waverly-Shell Rock, the Go-Hawks feature an eight-person senior class led by a pair of NCAA Division I recruits in forward Kenzie Roling (Iowa) and midfielder Siri Ott (Northern Iowa). They were key playmakers as sophomores during the team’s state finals run before fast forwarding to their senior season after the COVID-19 pandemic cost them a year of competition.

“They lead by example each and every day and all the underclassmen have realized that,” Greiner said. “They understand that’s the bar and that’s the standard. It’s really elevated our level of play.”

Smith scored on a breakaway before Aikey completed a scoring run up the sideline and Smith found Roling for the third goal within a three minute stretch from the seventh to ninth minutes.

Stromberg scored a match-high four goals. Roling assisted the sophomore on two of her scores, while Stromberg also found the net after a corner kick and booted the ball in from 15-yards out. Roling added three goals and Smith finished with two.

“We do bring back some quality experience but we have a lot of new faces and people that haven’t seen a lot of varsity minutes,” Greiner said. “The way we connected and found the back of the net was awesome for the first night out. We’re ready for a full game.”

DENVER 1, UNION 0: Denver’s Lexi Gehrke had a pair of quality looks saved early before making something happen for the Cyclones down the stretch. Gehrke intercepted a goal kick and scored in the 31st minute.

New coaches are taking over each of these tradition-rich programs this season. Les Redinbaugh is running Union’s program, while Ollie Johnston is at the helm for Denver.

Johnston moved from the UK in January. The longtime coach most recently worked with a girls’ club program from the U9-15 age groups. Johnston was also physical education instructor who taught boys and girls soccer at his school.

“We’ve got a really good group and we’re continuously growing,” Johnston said. “We’ve recently added a few numbers to the roster. The girls after last year are ready to go.”

The Cyclones’ coach liked what he saw out of his group.

“I want us to be a passing team,” Johnston said. “I don’t want us to just do longballs forward from defense. The girls definitely got that in today, lots of passing. We need to be quicker at times, but I’m confident that we’ll get the passing game that I want.”

CEDAR FALLS 0, WATERLOO COLUMBUS 0: Columbus defender Carmen Ortiz came up with a tackle at the end of Arianna Qualls’ lengthy run as time expired to preserve a draw.

Each team generated quality looks with a strong wind at its back during the abbreviated 20-minute scrimmage halves.

In the opening 20 minutes, Columbus senior Reagan Lindsay cut back and just missed a lengthy shot to the left of the net before another laser was deflected off the crossbar. Nikayla Youngblut also had a shot just sail over the crossbar.

Cedar Falls applied plenty of pressure over the final 20 minutes. Columbus goalkeeper Becca Defour made a pair of diving stops in the 24th minute. The Sailors’ Youngblut found Kayla Koch for a look that went over the crossbar with 1:45 remaining before Cedar Falls’ counter attack was stopped in the final seconds.

“We’re just so excited to be on the field,” Cedar Falls coach Alex Place said. “This is two years in the making. … We were right on the doorstep today a couple times and I think once we find the back of the net, I guess the floodgates might open.”

Place has multiple freshmen in her starting lineup that she said have the potential to be great leaders within the team. The Tigers are playing within a new formation this season.

“We’re trying to be a bigger offensive threat,” Place said. “We want to drop back in and pack it in on defense, but when we’re on offense, we’re trying to go, go, go, find our targets to feet and be a really explosive offense.”

Columbus coach Julie Girsch worked everyone onto the field during this long-awaited debut.

“We know where we’re at now and that bar just needs to get higher as we go through the season,” Girsch said. “The gap is a little bigger this year as far as experience versus not as much experience. I want to see that gap get a little bit closer.”

WATERLOO 2, HUDSON 1: Waterloo senior Anna McNalley timed up a breakaway run down the right sideline and scored the game winner with 1:30 remaining.

“It was a very nice run and a very composed finish,” Waterloo coach Chris Worthley said. “She’s going to be a great senior leader for us this year.”

Waterloo opened the game with a breakaway scoring run by Selma Begic in the third minute as it took advantage of limited chances.

“We’ve got a good group of players, a good mix of young and old and we’re still trying to figure stuff out at this point,” Worthley said. “For us this year the real key is going to be our composure, staying focused for the entire 80 minutes and taking the opportunities that present themselves to us. We really only had a couple of good looks today and we got them both in the back of the net.”

Hudson freshman Savannah Schneider corralled a centering pass and scored an equalizer for the Pirates.

“They’re just happy to be playing, they’re working hard and trying to have fun,” Hudson coach Ashley Smiley said. “I think we came together as a team. We put kids in different positions that they’ve never played before and I think they did really well adapting to whatever we threw at them today.”

Collection of photos from the area girls' soccer jamboree

Led by a class of 14 seniors, Waverly-Shell Rock's program returned to state for the first time since three consecutive runs from 2013-15.

Cedar Falls' first trip to state since 2009 ended in the quarterfinal round after Johnston set the tone early with its skilled forwards scoring in the first 10 minutes.

State boys' soccer preview: Columbus will open state tournament play against Burlington Notre Dame in a rematch of a competitive 1-0 contest from earlier this season.

A Waterloo soccer team that has maintained a positive outlook through recent adversity didn't fold after Dubuque Senior scored an equalizer in the final three minutes.

Hudson goalkeeper Anna Haskovec (55) dives to make a save against Waterloo Monday during the area girls' soccer jamboree at Memorial Stadium.