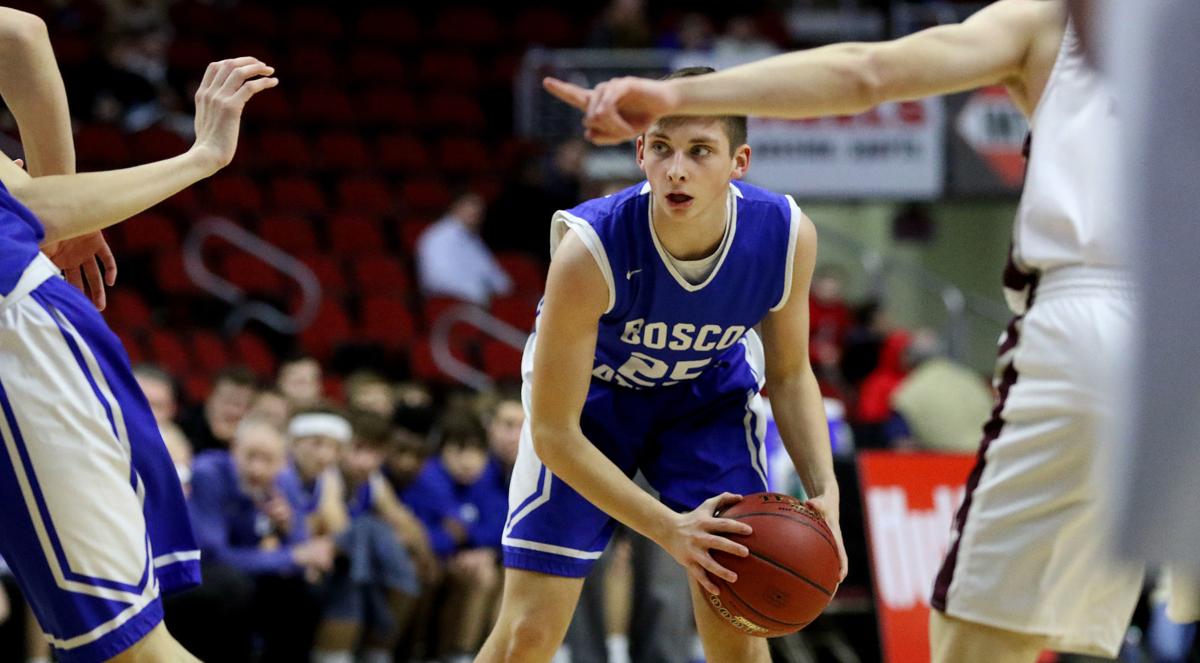 Don Bosco's Zach Huff (25) looks to move the ball inside against North Linn during a game in 2018. 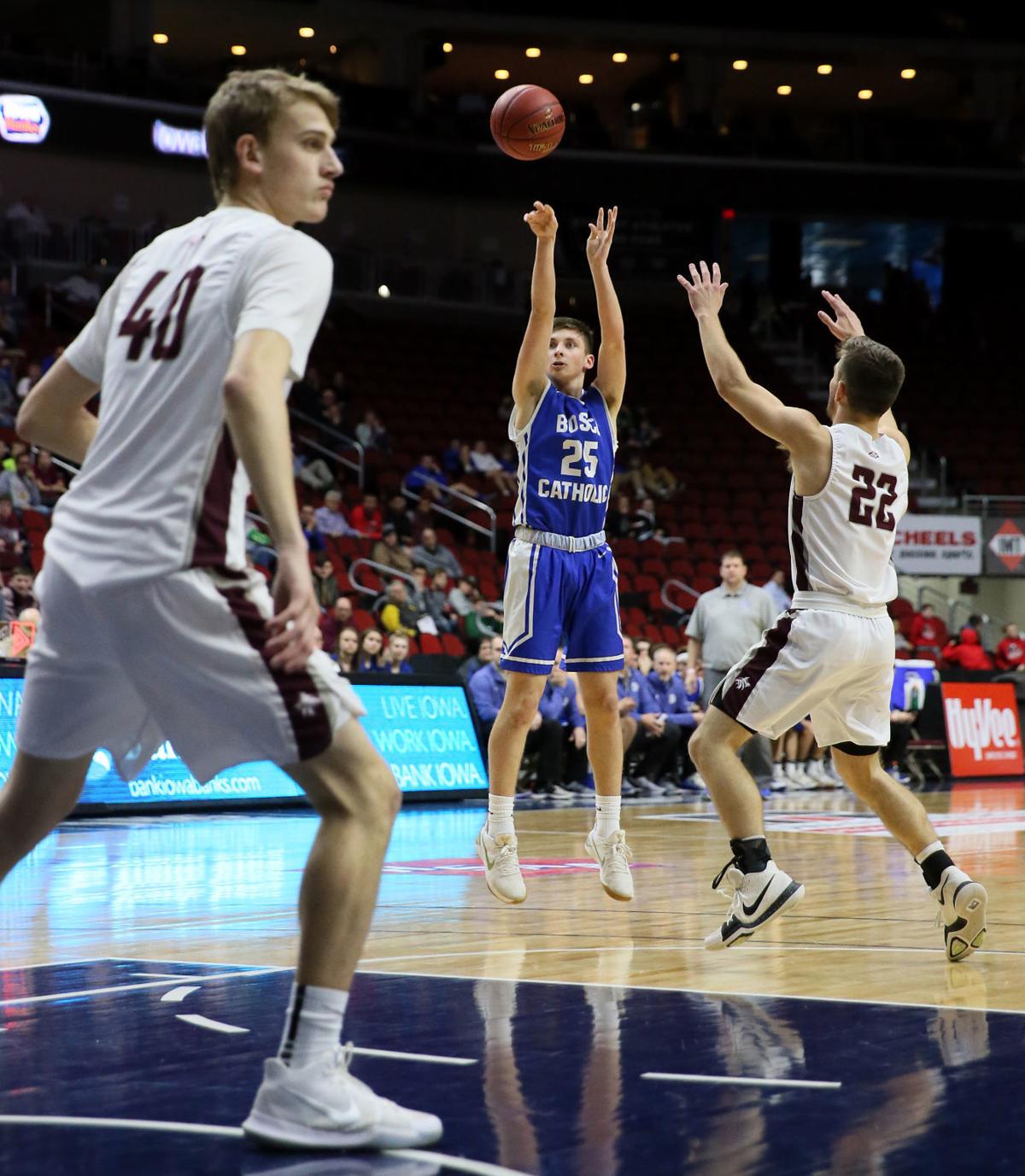 Don Bosco's Zach Huff (25) puts up a shot during a Class 1A state tournament game against North Linn in 2018.

The younger Huff has a good idea why it’s been a couple of years since the father-son duo have gone one-on-one.

“We did a lot up until a year or two ago,” Zach said. “I still think he thinks he can take me, but he is scared to play me nowadays.”

While there was a joking dig at his dad, there was no joke in Jason Huff’s game when he was starring for the Dons in the late 1980s.

The elder Huff scored 2,155 career points at Don Bosco, leading the Dons to back-to-back state tournaments in 1987 and ‘88. He is now a member of the Iowa High School Basketball Hall of Fame.

The last four seasons, it has been the son who has risen to big-time player status.

“Everyone says he was really good,” Zach said. “I think I have done a decent job of living up to the name and helping bring basketball back to Don Bosco like it was before.”

It was those lofty expectations that met Zach when he arrived at Don Bosco four years ago and was immediately inserted into the Dons’ starting lineup. He certainly has lived up to expectations.

A great part of his development occurred when he wasn’t asked to carry the team early in his career.

“We had some really good players when he was a freshman and sophomore,” Don Bosco head coach Nate Kellogg said. “We asked him to play a role, to stay patient and prepare himself for a different role when he became a junior and senior.”

With guys like Zach Nie, Sean McFadden and Jack Kelley leading the Dons, Huff averaged 5.5 points a game as he played a complementary role on a 21-2 squad. It stayed that way as a sophomore with all three of those guys back. Huff averaged 8.3 ppg and helping Don Bosco reach the state tournament, where it finished third, for the first time in 30 years.

“My first two years we had really good teams and my job was to be a role player,” Huff said.

Asked to do more a year ago, Huff increased his average to 15.1 and now as a senior, he is averaging 23.1 points per game for the 15-5 Dons, who wrapped up their season last night at Clarksville.

Huff has done it while getting extra attention.

“I’m seeing faceguards and double-teams pretty much every game and that has been an adjustment,” Huff said. “It can be tough some nights more than others when you get a fresh guy who wants to be in your grill every night.

“Those are the nights you have to be mentally tough and push through it and make plays ... make plays to help my teammates get easy buckets.”

Part of Huff’s preparation for this season came with stringent offseason training that included working out individually with the Waterloo Black Hawks’ strength coach and on the court with his Pure Prep AAU squad, which also featured Iowa State recruit Xavier Foster.

“He’s your normal gym rat,” Kellogg said. “He’s done a great job of transitioning from a role player to a guy who has to be a scorer every night. “

Through his offseason play and in-season play, Huff has garnered a lot of college attention, including strong looks from NAIA schools like Briar Cliff and Grand View.

“I probably won’t make that decision until after the season,” Huff said. “Right now … we’ve got some pretty big goals and we hope to play a few more games.”

Prep of the week: Hard work paying off for Clarksville's Borchardt

Ellie Foster's relentless desire to improve has been a key to her high school basketball success.

After securing his first district title, Union's Lake LeBahn is determined to finish his cross country career on a high note at state.

Jack Moody is the type of golfer who makes an impression on the first tee.

Drew Sonnenberg has been the most efficient passer in the state through the first five weeks of his senior season.

Senior quarterback Cael Loecher is 16-1 as a starter for the No. 2-ranked Tigers.

Before she even stepped onto the court as a varsity starter, Alayna Yates had the attention of coaches from some of college volleyball's top programs.

Isaac Tolbert hasn’t become a success on the football field by backing down from challenges.

Cedar Falls held off East down the stretch to secure a metro boys' basketball victory Friday.

The meeting is for parents of 2020-21 kindergartners.

Don Bosco's Zach Huff (25) looks to move the ball inside against North Linn during a game in 2018.

Don Bosco's Zach Huff (25) puts up a shot during a Class 1A state tournament game against North Linn in 2018. 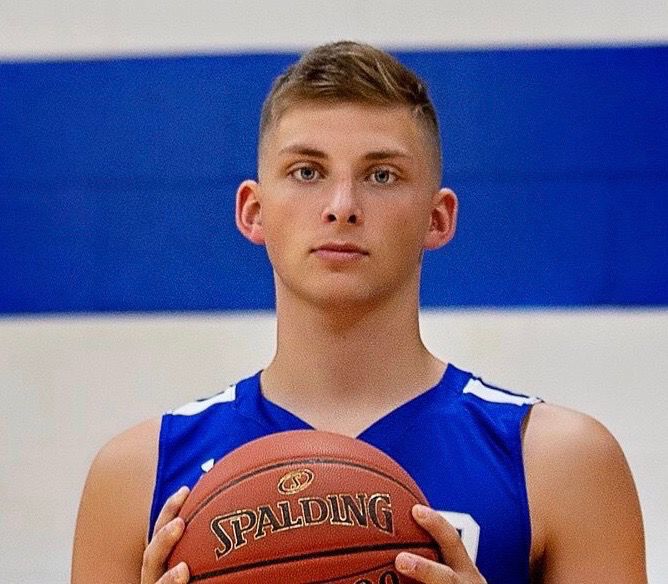