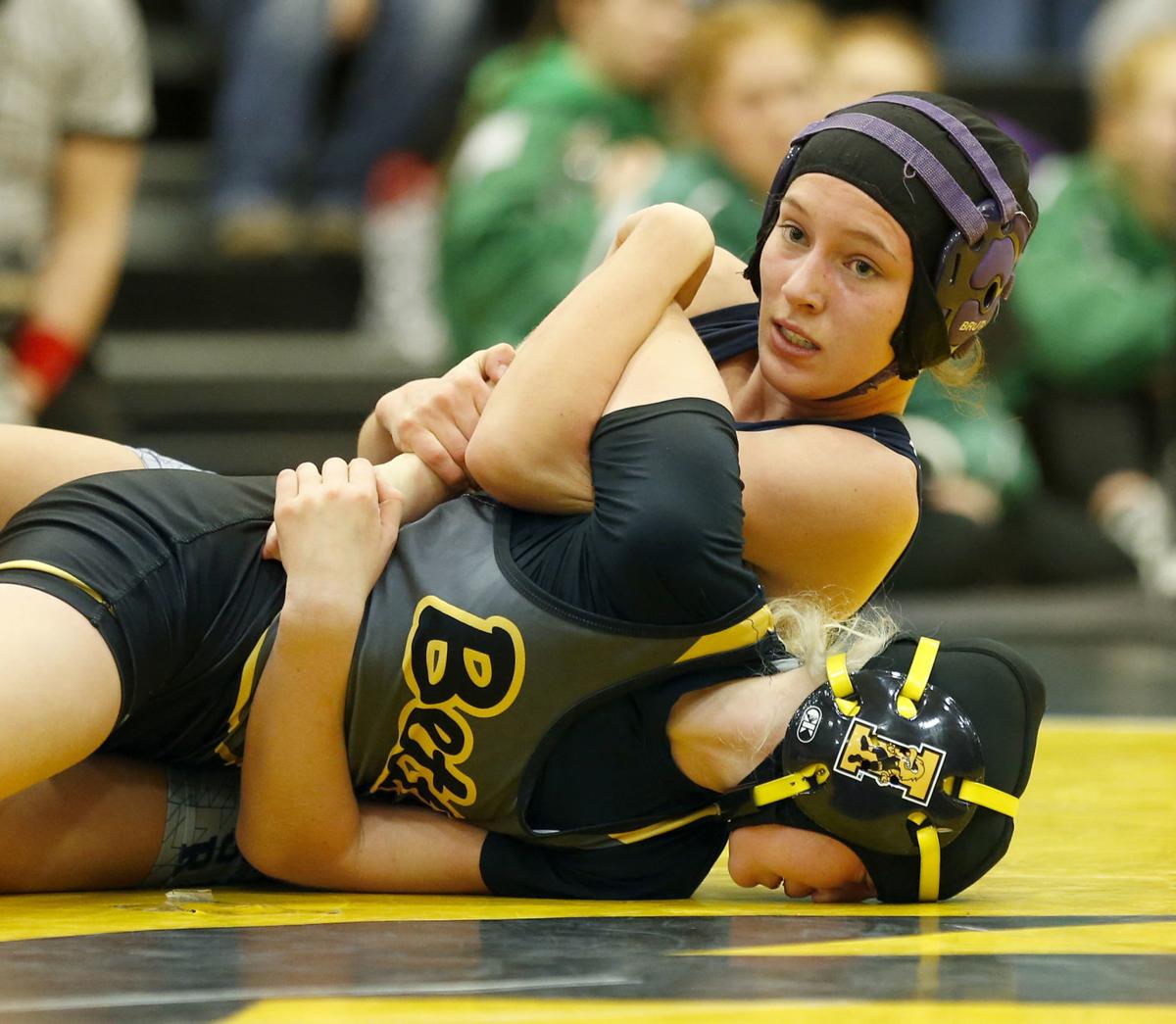 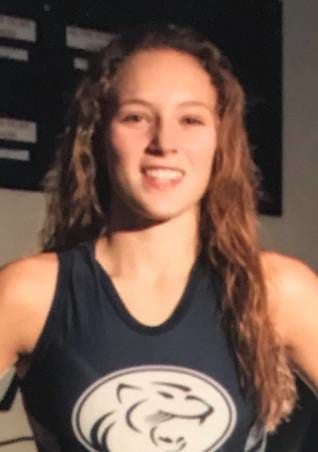 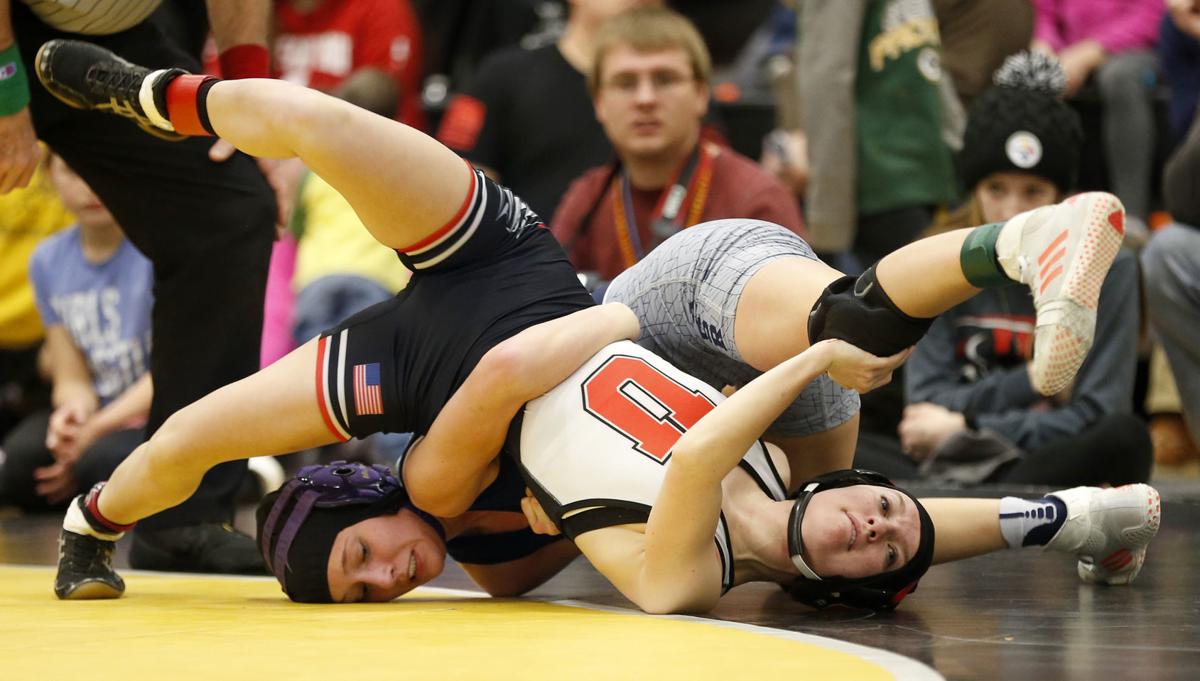 ACKLEY – There was a good chance that Ali Gerbracht was already hooked on wrestling.

By the time she was five or six, Gerbracht was practically an official member of the Cougar wrestling team. It also reminds her and her dad of one of their fondest memories.

“I had a couple of my wrestlers, Levi Nicolai and Jim Groenwold, Jim’s my assistant now, who wanted us to wear robes on the award stands at tournaments,” Chad recalled. “I said, ‘No, we are not wearing robes.’

“So I think to just make fun of me, those two had their girlfriends make them robes in home economics class and they made one for Ali, too.”

Since then, Gerbracht has wrestled all over the United States. That is a moment that sticks out.

In fact, there is a picture of Ali wearing that robe that still resides inside the Cougar wrestling room today.

“It was sparkly and just for me, and they let me run out before matches and warm up with them wearing it,” laughed Gerbracht.

Chad says those little things can create spark and interest, and that might have been the moment that led Ali down a path that has since led to many more wrestling memories.

Last January, Gerbracht became the first champion at the inaugural Iowa Wrestling Coaches and Officials Association girls’ state tournament in Waverly at 106 pounds. That led to Gerbracht being named the Dan Gable 2019 Ms. Iowa Wrestler of the Year.

Then last Thursday, with a 23-second pin of Hudson’s Brody King, Gerbracht joined South Winneshiek’s Felicity Taylor as only the second girl to reach 100 wins in Iowa high school competition.

“To get 100 was a big relief and made all that hard work worth it.”

Now at 106 wins with just more than a month left in the season, including a defense of her 106 pound title at the IWCOA girls’ state tournament Jan. 24-25 in Waverly, there is another interesting story.

With 10 more wins, Gerbracht would tie Nicolai for seventh-most wins in AGWSR history, and she is just 14 short of reaching the Cougars’ top-five list.

Gerbracht, also a standout softball player, is 24-3 with 13 falls heading into AGWSR’s double-dual at Jesup Thursday.

“I just want to keep doing the same thing I’ve been doing,” said Gerbracht, who was a district qualifier last season. “I’m going to believe in myself, work hard and understand there are a lot of good wrestlers out there.”

Gerbracht has prepared for one last run at a berth in the boys’ state meet day-by-day.

“In these months it’s wrestling, 24-7,” she says. “It’s after practice I’m going to do 25 more push-ups to beat this person. Or the next day it is doing this to beat the next person.”

Chad, who earned All-America honors for Wartburg College’s 1996 NCAA championship team, says Ali is a confident person and he reminds her on a daily basis.

“I think it is just confidence,” Chad said. “It’s knowing what you are good at and not worrying about who you are going to wrestle. I tried to sit her out of a match a couple of weeks, and she looked at me and said, ‘I made weight. I’m going to wrestle.’ That was her mindset.”

Having her father in her corner from the start of her career has been special.

Gerbracht has decided, for now, not to wrestle in college and will concentrate on academics with plans to study biology at the University of Northern Iowa before transferring to Allen College of Nursing to become a nurse practitioner.

“There are a lot of emotions, good and bad, but he’s always there for me,” Ali said. “He’s been really tough and pushes you to your limits which is what I need. But he is a coach at practice and just dad at home.”

For Chad, the closing weeks of this season may be harder for him than Ali as he’s had many special moments with her.

“I was filling out an application for Coach of the Year and it asked what is my No. 1 highlight,” said Chad, who has coached more than 20 years.

The answer was easy, he said. It was the moment Ali leaped into his arms after winning the state title last year.

After a month of games on the road, the UNI women's basketball team is looking forward to a little home cooking this week.

Taylor Lujan reached a career milestone Friday night, but that was one of the few highlights for the UNI wrestling team.

Cedar Falls had to call on its depth Tuesday to put another one in the win column.

Waterloo West protected its new No. 2 state ranking Tuesday with a boys' basketball win over Xavier.

The Waterloo Black Hawks and Tri-City Storm played for the third time in five days Tuesday night at Young Arena.

Nick Bosa remained on the turf with the wind knocked out of him after beating yet another offensive lineman for a sack when the appreciative San Francisco 49ers fans started chanting his name.

Davante Adams' drive to be great has become an 'obsession'

Davante Adams obsesses about being great.

High school wrestling fans are invited to cast their votes for the Dan Gable Mr. and Ms. Wrestler of the Year Awards.

Waterloo West continues to make gains on the mat, but Cedar Rapids Kennedy had its number Thursday night.