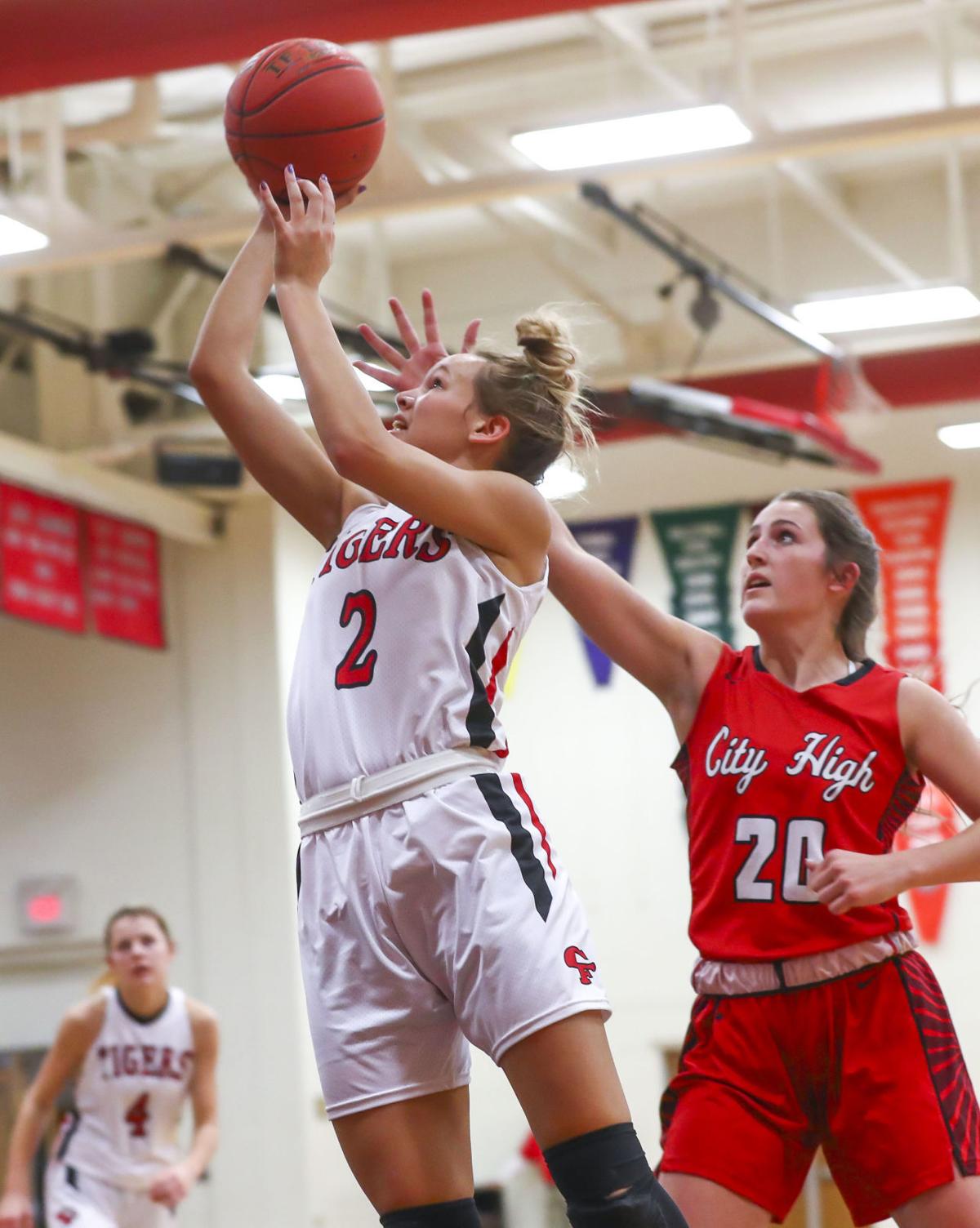 Cedar Falls senior Anaya Barney drives to the basket for a lay up against Iowa City High on Friday at home. 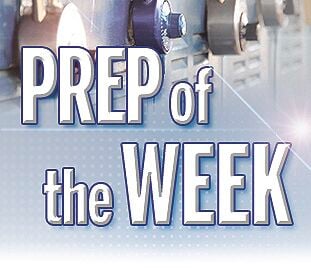 CEDAR FALLS – Anaya Barney runs the basketball court with a dogged determination to do whatever it takes for the Cedar Falls Tigers to win.

If Barney has to score points, she scores in bunches. If she is well defended, she finds an open teammate for an easy score. On the defensive end, Barney will defend the post on one possession and then on the next hound a perimeter player so she has no chance to score.

That determination comes from years of watching and learning from some of the best to put on the Red and White.

As a freshman, Barney learned from Kam Finley, Cynthia Wolf and older sister Kiana. And for the previous three years she partnered with Emerson Green to form one of the best backcourts in the state of Iowa.

Cedar Falls (8-1) used a 10-0 run midway through the third quarter to seize control and held off several Little Hawk surges to pull out a 68-58 Mississippi Valley Conference victory Friday at home.

“When she stepped in as a freshman she had some great leaders in front of her, great examples for what it takes to excel at a high level,” Cedar Falls head coach Gregg Groen said. “As we’ve seen her game improve and what she does on the basketball court, the leadership, a lot of what she does comes from those guys and that is fun to see.”

“They were great role models,” adds Barney. “Lexie Godfrey is another. They helped me develop into the leader that I am. I’ve also had coaches that have pushed me and helped me become a leader.”

After a couple of big years of losses to graduation, the Tigers were going to need Barney to lead in 2020-21.

Late last month, Barney, a two-time second team all-state selection, passed the 1,000 career point mark. She just passed Barb Franke for fifth on the all-time scoring list and is on pace to surpass Green, who is fourth with 1,293 points.

The 5-foot-11 Barney is already tied for the school record with 122 career 3-pointers, and will finish her Tiger career ranked in the top five in scoring, blocks, steals and in the top 10 in assists and rebounds.

But Barney never enters a game thinking she has to be the scoring leader or the one her teammates will look to in crunch time.

“I always know my team will have my back if I’m having an off night,” Barney said. “We have a lot of girls who step up every night and do what they need to do for us to succeed. If the other team focuses on me, I know they are going to get the job done.”

Barney says the Tigers have all the pieces to make a run at the programs sixth state tournament appearance in the last seven seasons.

Groen says the leader everyone sees on the court is the same selfless person off it.

“The neat thing about Anaya is she is just a great person,” Groen said. “I think that is what makes it fun to see a person like that excel.”

Barney also a standout hurdler on the Cedar Falls track team and a blue belt in TaeKwonDo, an art form she still practices at home with her dad, will take her talents to Northern Iowa next winter where she will join Finley, Wolf, Green and her sister.

“It will be a Cedar Falls reunion,” Barney said.

“We’re going to miss her a lot next year, but it is going to be fun to see her join those other girls and see what they can do the next few years,” Groen added.

Cedar Falls senior Anaya Barney drives to the basket for a lay up against Iowa City High on Friday at home. 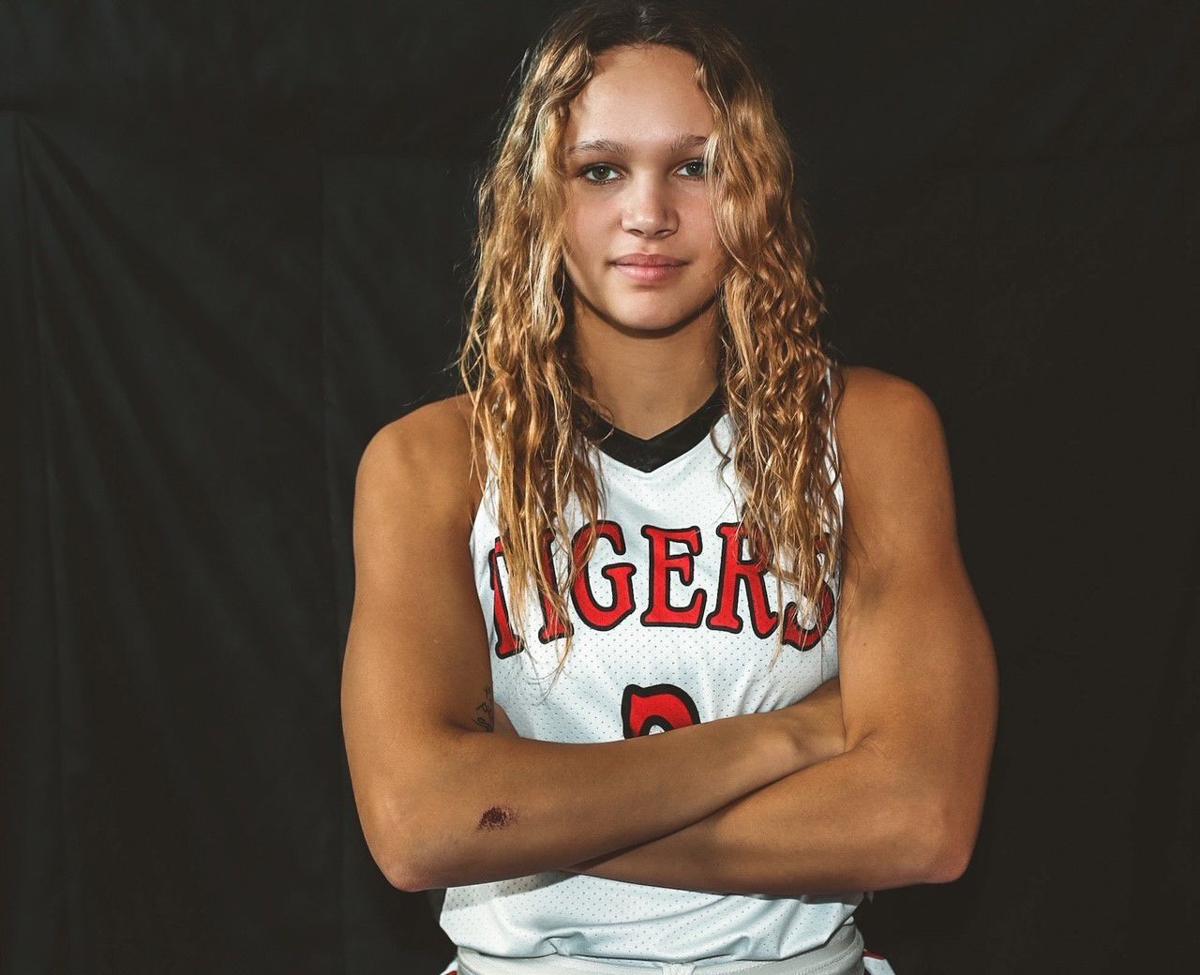