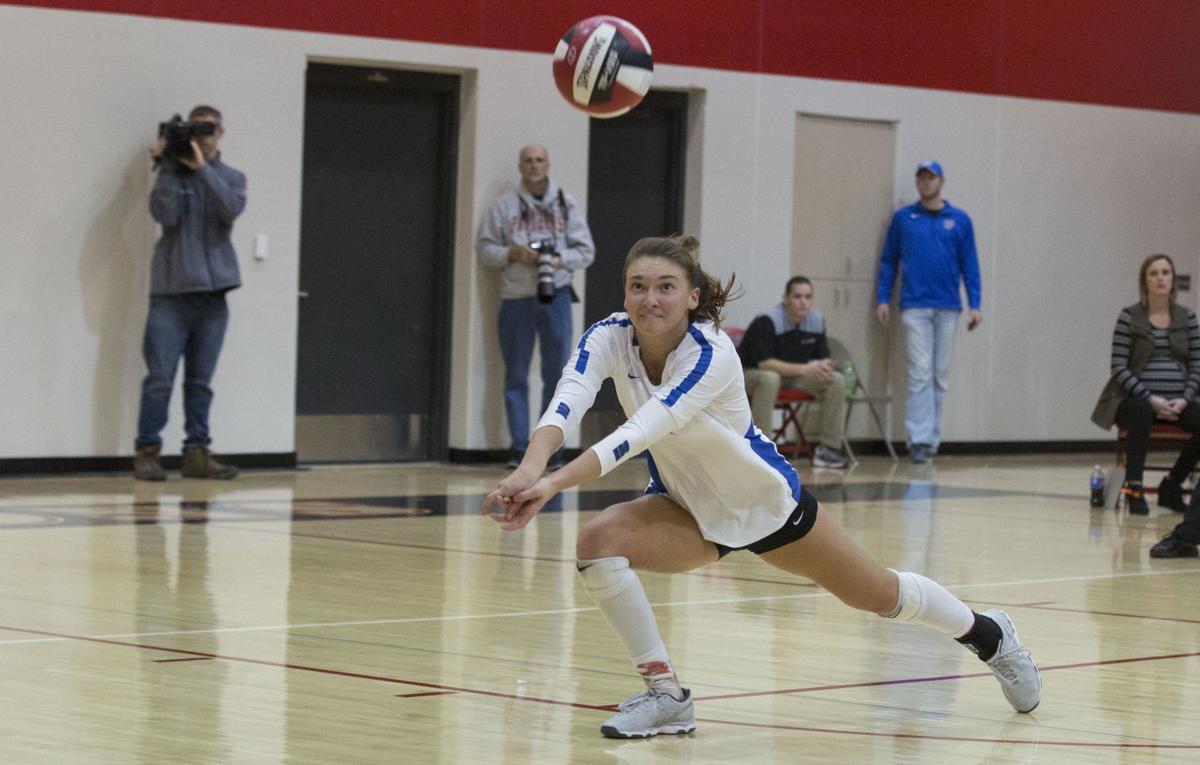 Dike-New Hartford's Morgan Weber makes a lunging dig during the 2018 Class 2A regional final against Hudson. 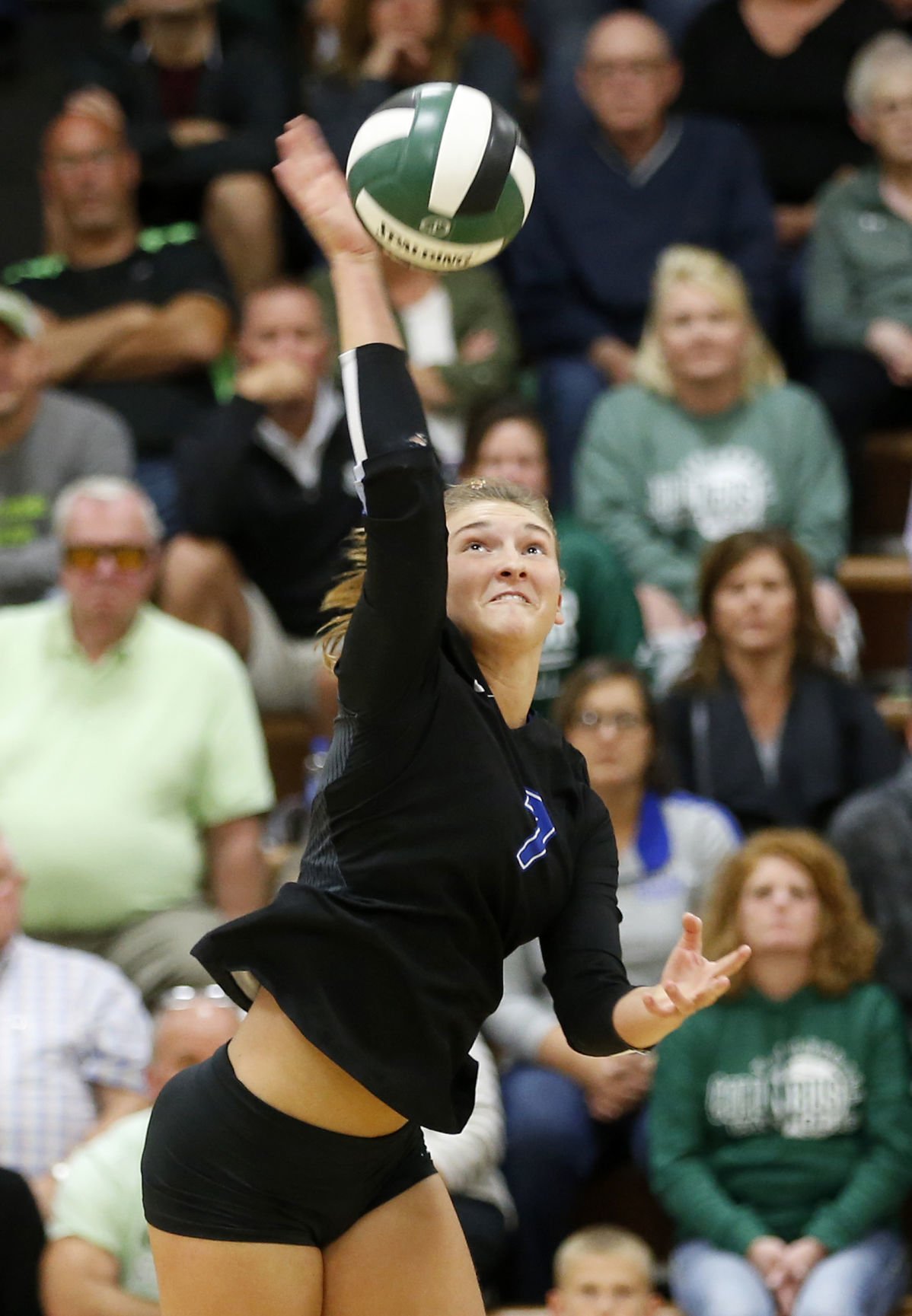 DIKE – Tim Kopriva sensed that Morgan Weber had something to tell him, but she tried distracting him by going right into her sales pitch.

The longtime Dike-New Hartford girls’ golf coach had already determined he was going to buy one of the raffle tickets that Weber, his two-time state champion golfer, was selling to help fund her club volleyball team.

“She had come over to the house to sell the raffle tickets,” Kopriva recalled. “Then she said, she might have some bad news to tell me.”

Weber, a standout in volleyball, golf and basketball, had announced her intentions to play college volleyball at Wichita State. After making the commitment, Weber learned the team was going to take a summer trip to Italy and she’d have to leave Dike to join the Shockers program in late May to prepare for the trip.

The girls’ state golf tournament — where Weber has won back-to-back state championships in Class 2A, and would’ve been attempting to become just the eighth girl since 1958 to earn medalist honors three times — was set to be held June 1-2. That meant Weber was not going to play her senior season of golf.

“She said, ‘I got to figure out the dates, but just want to let you know that if push comes to shove, I will be going to Italy with the volleyball team,’” Kopriva summarized.

“It just kind of shows you the kind of person she is,” assistant girls’ golf coach Steve Freese said. “She came over and told me the same thing after she told coach Kopriva. You don’t see many people who do that in person.”

Obviously, with the coronavirus pandemic, both Wichita State’s trip to Italy, and the girls’ state golf tournament were canceled. But Weber admits it took her almost a month to muster up the courage to tell Kopriva her choice.

“It was, obviously, a very had decision, because I love golf, love the game of golf and all the people involved with it,” Weber said. “It is just hard to say you can’t play because you have a different opportunity that is going to help you in the long run. Personally, the overseas trip with my college team would’ve benefited me.”

Accustomed to traveling for volleyball or playing other sports, these past two months at home have been weird for Weber. Fox Ridge Golf Course in Dike has been opened for a bulk of that time, serving as the lone constant.

“That has been nice,” Weber said. “I’ve been working up there and have played a little bit more.”

Additionally, Weber has had more time to ramp up her trash talking, especially when it comes to the times she finds Kopriva and Freese as her playing partners on the course.

“He’s a really good player,” Weber said of Kopriva. “So I have to take my shots at him when the chance comes. It’s back and forth. We both have our moments, like to talk crap to each other.”

And when she isn’t getting tested by her coaches, Weber doesn’t have to look far for other challengers. Her older sister, Bri, three times finished in the top-five at the girls’ state golf meet. Her brother Royce is a member of the Northern Iowa men’s golf team.

“It depends on the day,” Morgan said, of which sibling is the best player. “Any one of us, if we are on, can win. It usually is a pretty close battle. Bri is finishing up nursing school, so she has been tied up, so we haven’t played much. But when Royce is on he is the one who puts in more time. He is more consistently winning.”

Kopriva says if Weber chose so, she’d could go a long ways in golf or trash talking.

“Steve (Freese) and I feel like we are pretty good golfers, but on many days she can take us and from the same tees,” he said. “She likes to let us know about it, too.

“But, I’ve coached for 10 years, and she is probably most natural, gifted golfer I’ve coached. It would not be a far stretch if she were to work on golf as much as she does volleyball ... you may have seen her on TV in the future.”

A look back at great playoff moments in Black Hawks history

There is a good chance the Waterloo Black Hawks would be preparing to play a Clark Cup playoff today.

The Last Dance: Waterloo's McCausland recalls his moment with Jordan

Columbus Catholic has released its 2020 baseball and softball schedules.

Wapsie Valley returns to victory as high school baseball is back

The Warriors plated six runs in the fourth and fifth innings to defeat Waterloo Columbus.

Dike-New Hartford's Morgan Weber makes a lunging dig during the 2018 Class 2A regional final against Hudson. 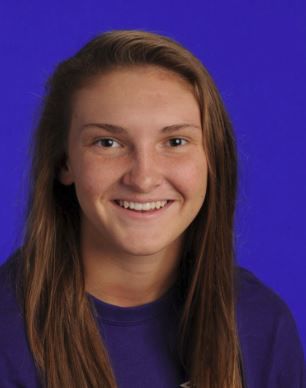