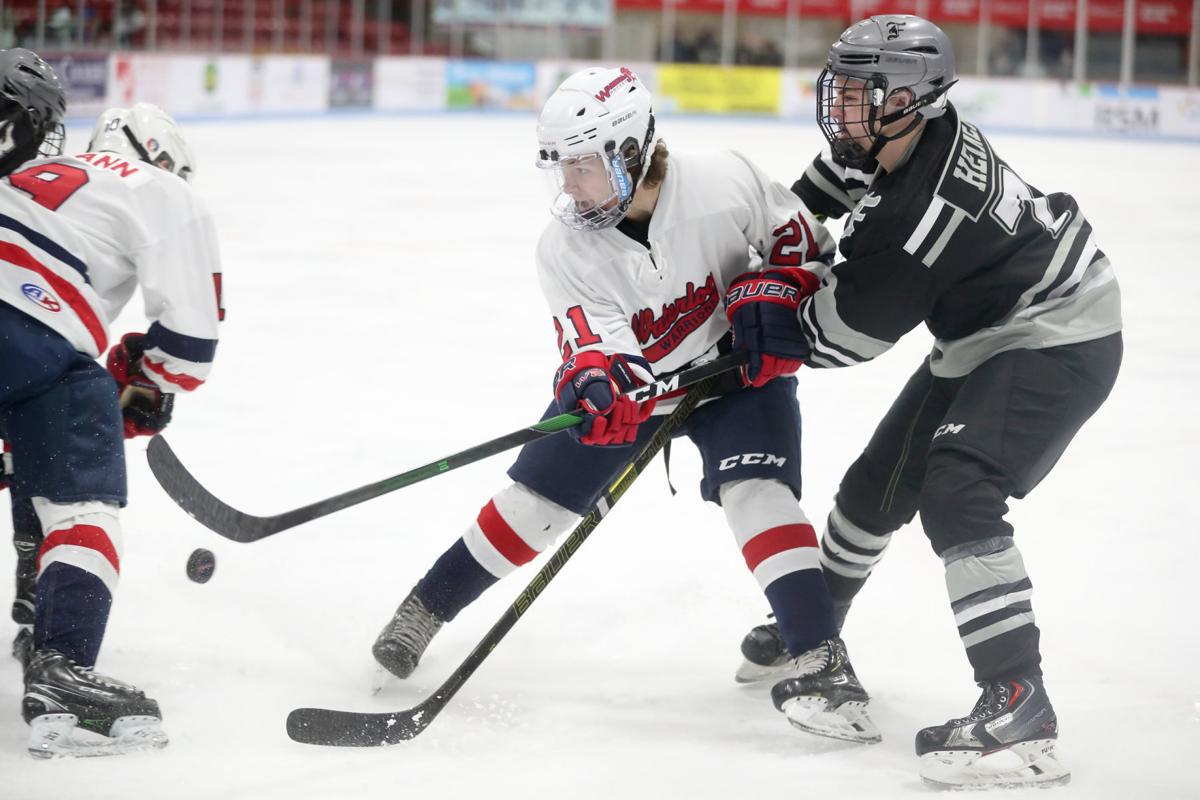 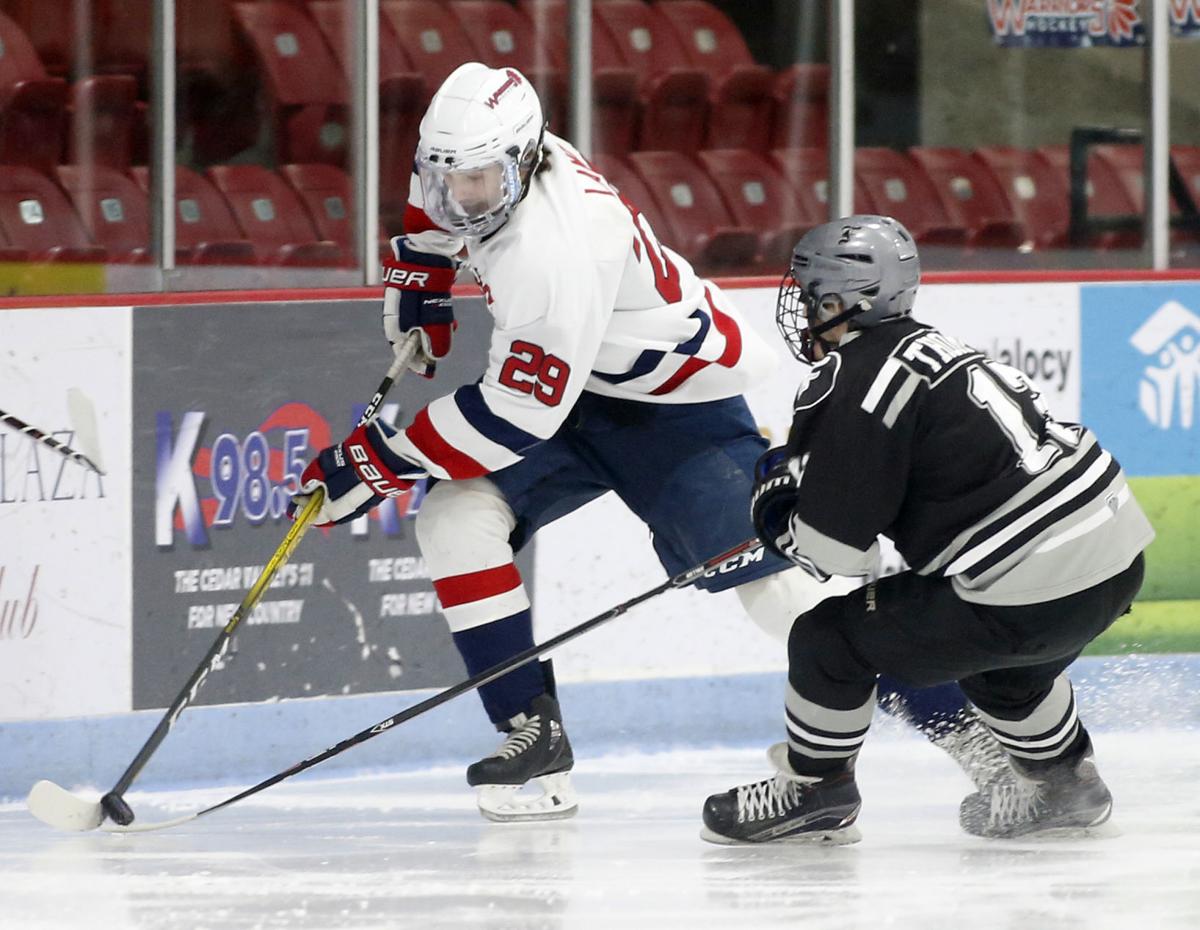 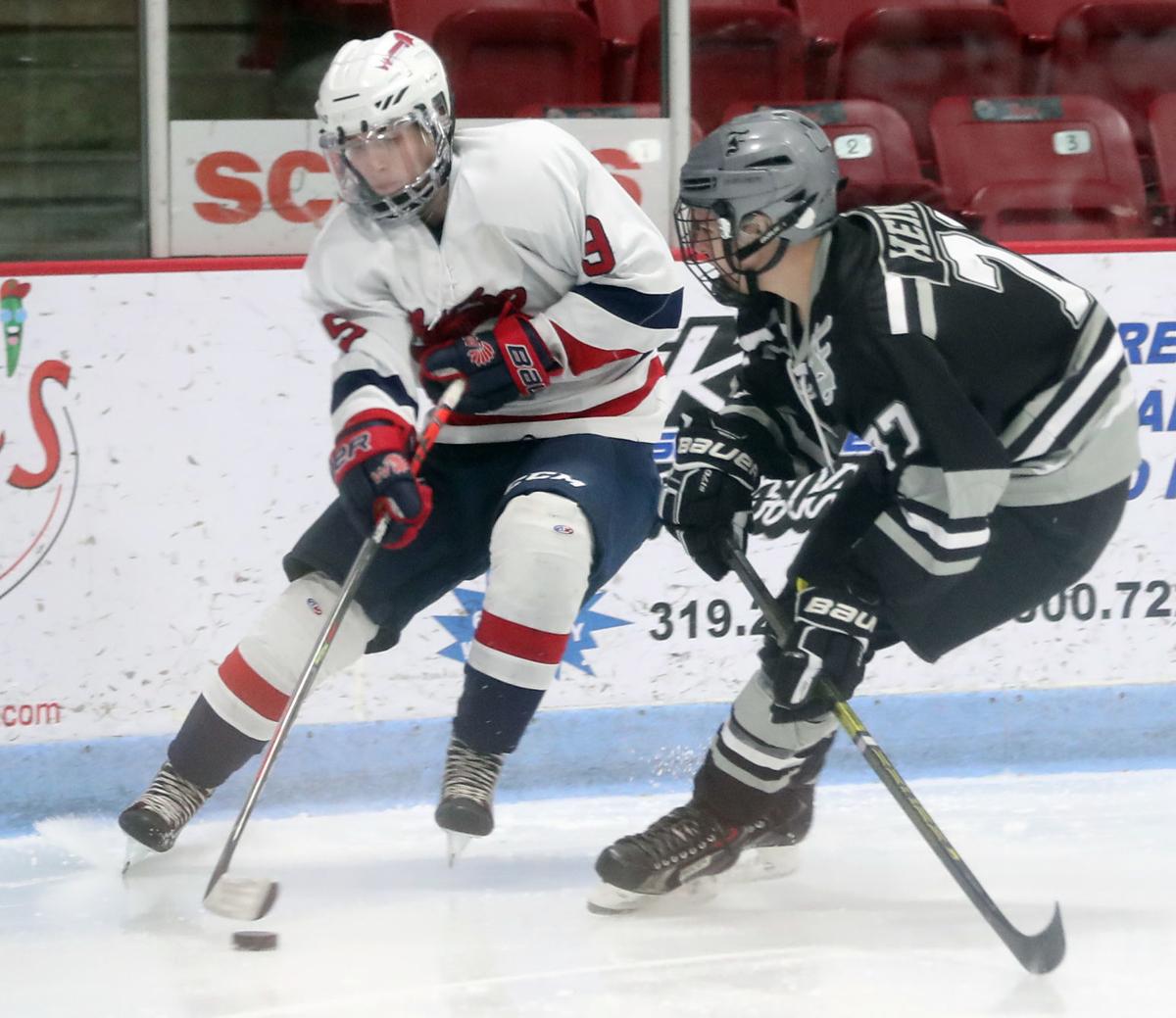 Waterloo Warriors J.P. Smith tries to get a pass off around Fremont's Max Heinen during Saturday's game at Young Arena. 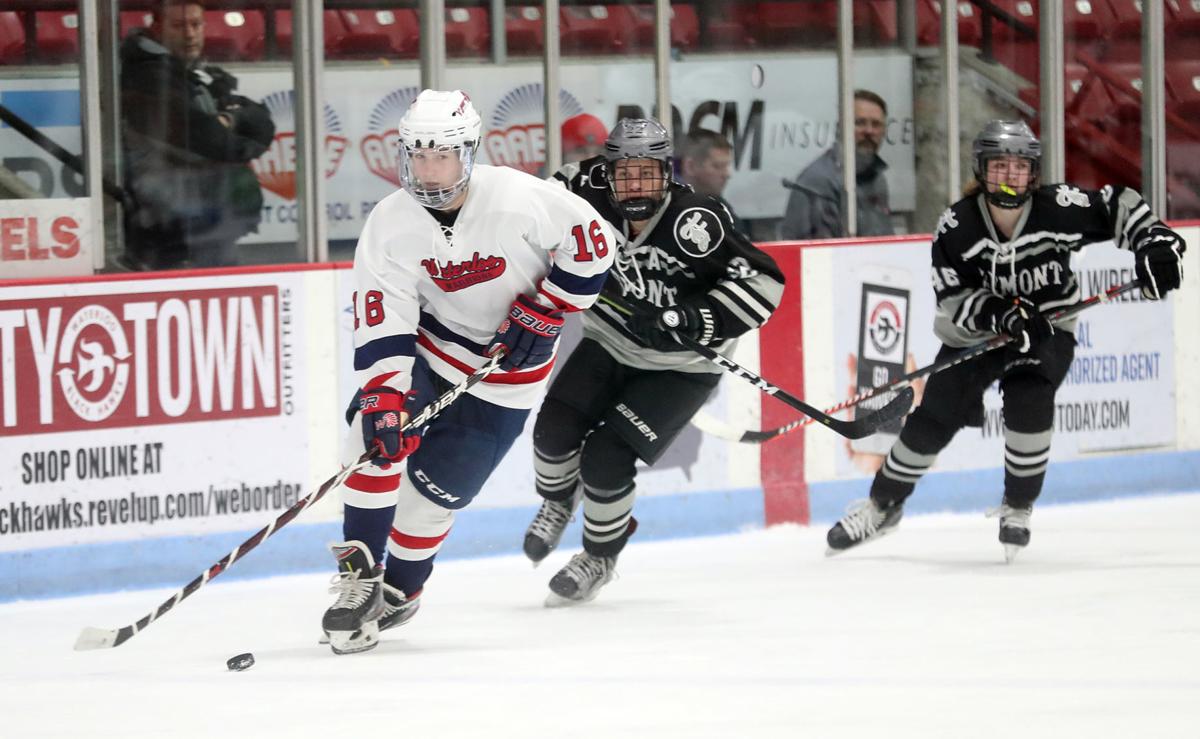 Waterloo's Christian Hesier makes a break down the ice Saturday against Fremont. 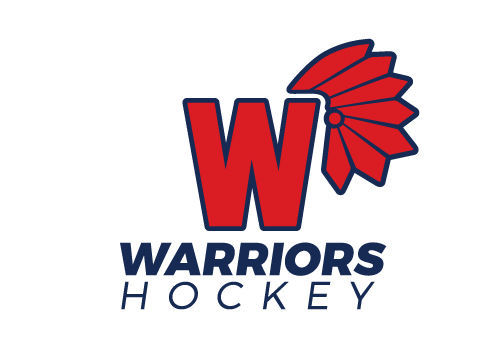 WATERLOO — On Thursday night, the Waterloo Warriors dropped a 4-3 decision to an Ames team that had only won a single game to that point versus 16 losses.

The Warriors were shorthanded as Ben Sinnott was serving a suspension, John Harrison was nursing an injury and even head coach Brian Cook missed the trip due to the flu.

Saturday night, the Fremont Flyers came to Young Arena and felt the wrath of a very disgruntled group of Warriors as the home team scorched the visitors 6-0 in MHSHL action.

“I thought the guys responded well to what happened Thursday night, and they came out and had themselves ready to go,” said Cook. “That doesn’t mean they are off the hook from what happened and we will address that Monday. We didn’t have a lot of time to get ready, but I did tell the guys we need to get a good start and score first. We haven’t done that over the last three games or so.”

Brayden Kirchmann absorbed all that Cook had to say as he came out gunning and scored the first two goals for Waterloo.

Kirchmann’s first tally came 1:48 in the first as he broke free in front of the net and took in Carter Frost’s pass and delivered it top shelf, just clearing the glove of Flyers keeper Matthew McKinney.

Less than a minute later, Kirchmann grabbed an easy offering from JT Metcalf, and slapped his shot into the back of the net for a 2-0 lead.

“We knew we had to come out here tonight and play a lot harder than we did the other night,” said Kirchmann. “I was able to get those first two goals quick and I think that set the tempo for the rest of the game. The second goal I got was one of those you don’t think about you just shoot.”

Metcalf followed suit minutes later, as roles were reversed, and he accepted a drop pass from Kirchmann and splashed the nylon for their third goal, chasing McKinney from his duties in the crease.

Kole Latusick skated unattended in front of the Flyers new goalie, Jaden Salado, and threw a backhand shot beyond the net minders mitt building a 4-0 advantage after the first 17 minutes, and the rout was on.

Latusick picked up his second strike of the game mid way through the second frame, as skated unattended in front of the Flyers new goalie, Jaden Salado, and threw a backhand shot beyond the net minders mitt building a 5-0 advantage. It was Latusick’s 14th goal of the season.

Riding a comfortable lead going into the final period, sophomore net minder, Eli Marchese stayed on top of his game and warded off all threats including a pair of two-on-one breaks favoring the Flyers.

“I think in a game like this the biggest battle I have is to keep my focus,” said Marchese. “After what happened at Ames we were all glad to get back on the ice and play as a team. When we got on the ice you could just tell that the boys were feeling it. I think we learned our lesson and we just need to keep the same mindset from game-to-game. This win felt really good.” It was Marchese’s second shutout of the season and helped improve his record to 6-1.

The Warriors added an insurance goal late with Kirchmann hitting all net for his first ever hat trick as a Warrior.

“Getting the hat trick was really cool,” said the sophomore from Waterloo East. “I got the first two and really wanted that third one, but it took a while. It was a big relief when I got it, now hopefully we are back on track as a team and can keep this going.”

“We should be getting everybody back here soon,” said Cook. “When that happens we should be able to get our lines straight. We have two powerful lines right now and even in some of those games that we maybe should have lost, the guys have pulled together and found ways to win them. We have been lucky at times.”

Waterloo Warriors J.P. Smith tries to get a pass off around Fremont's Max Heinen during Saturday's game at Young Arena.

Waterloo's Christian Hesier makes a break down the ice Saturday against Fremont.