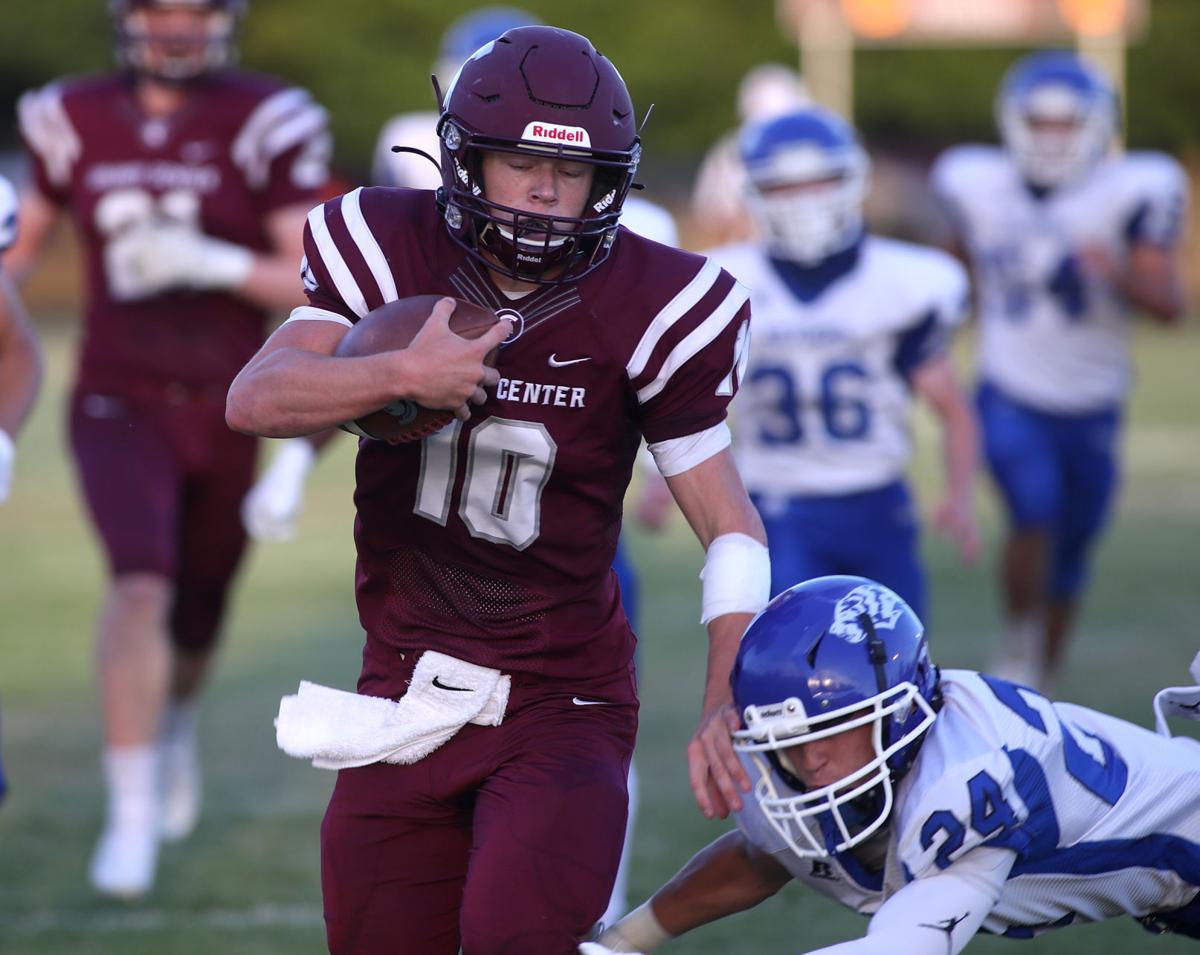 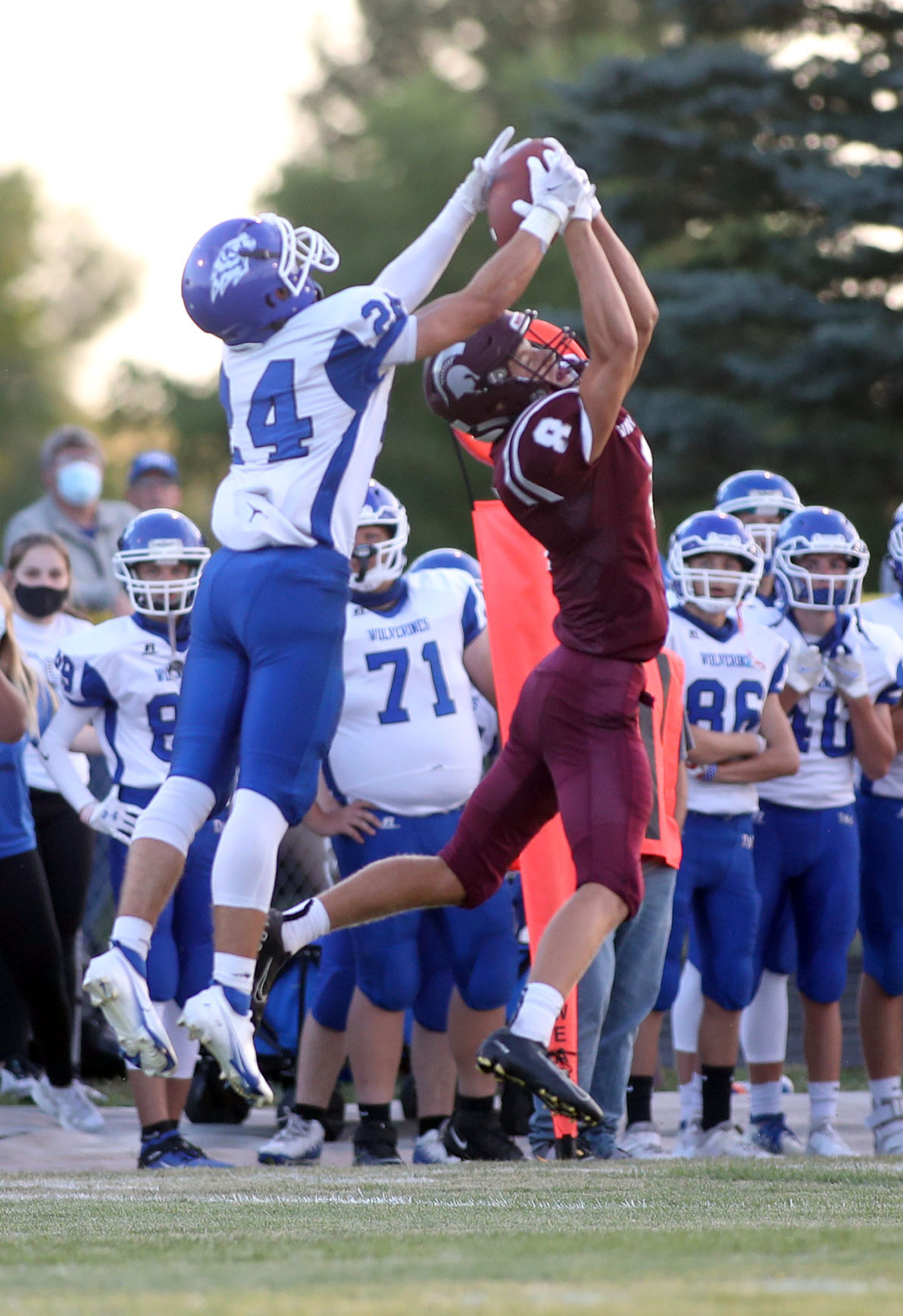 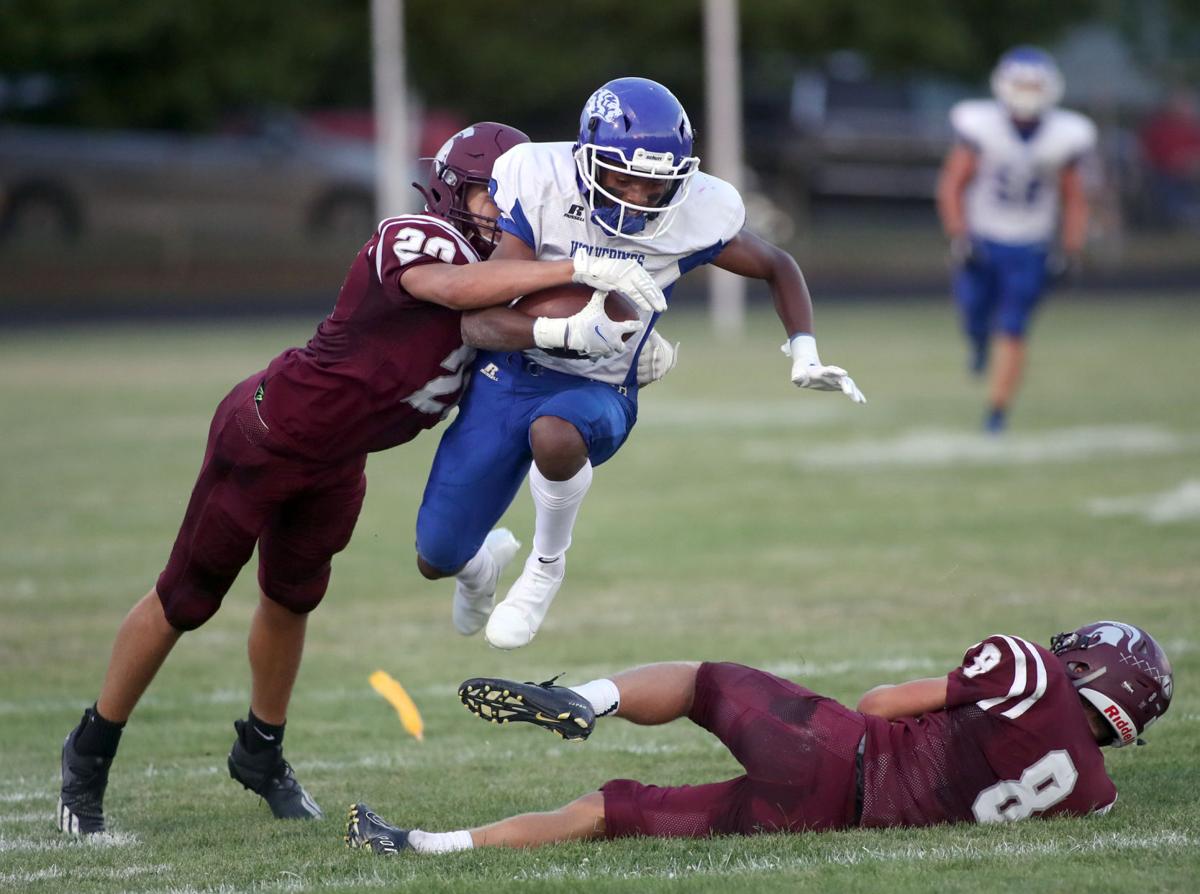 Dike-New Hartford's Devon Kollasch is tackled by Grundy Center's Dayne Zinkula after making a catch for a long gain that was brought back on a penalty. Photographed Friday, Sept. 4, 2020, in Grundy Center, IA. 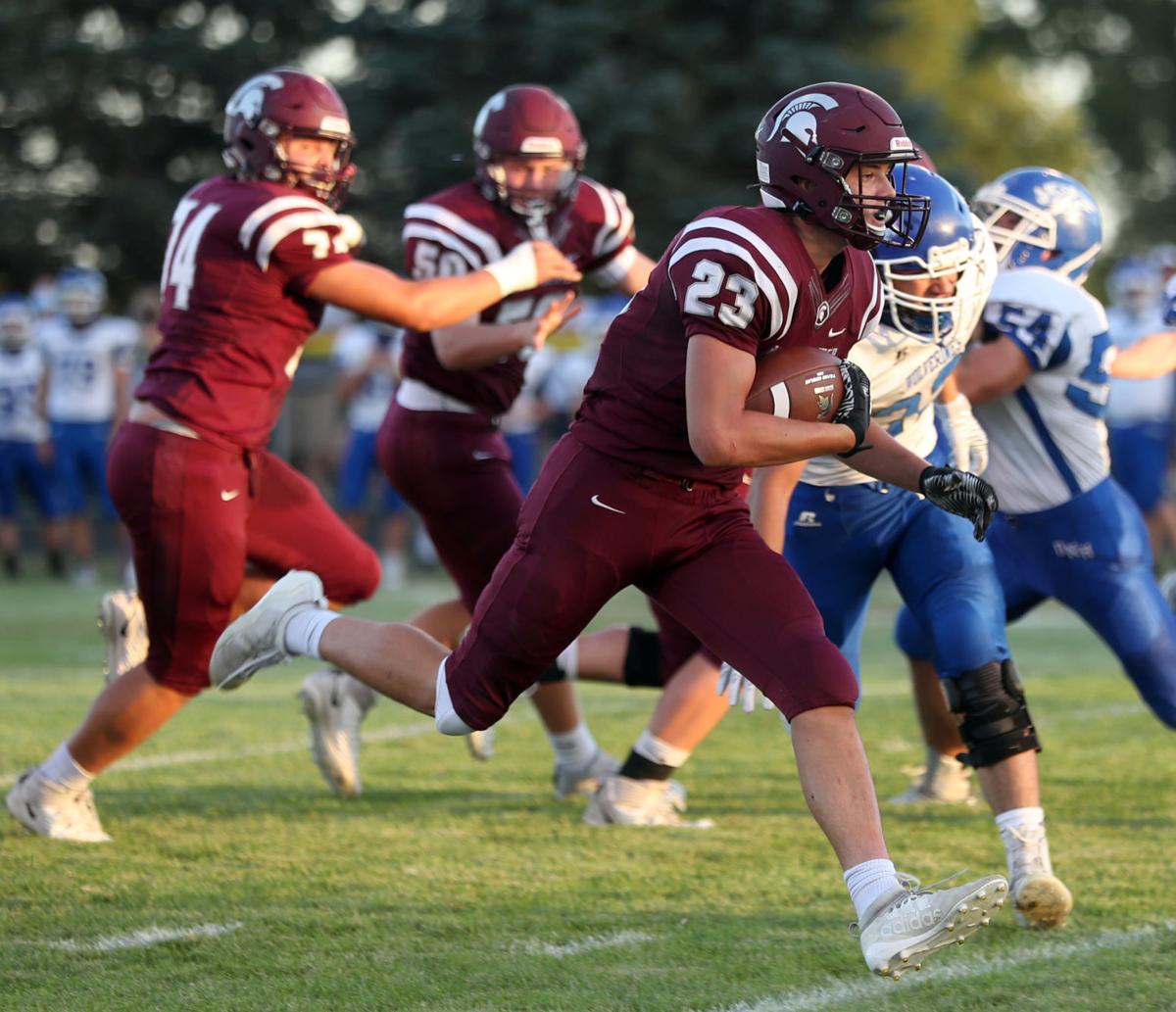 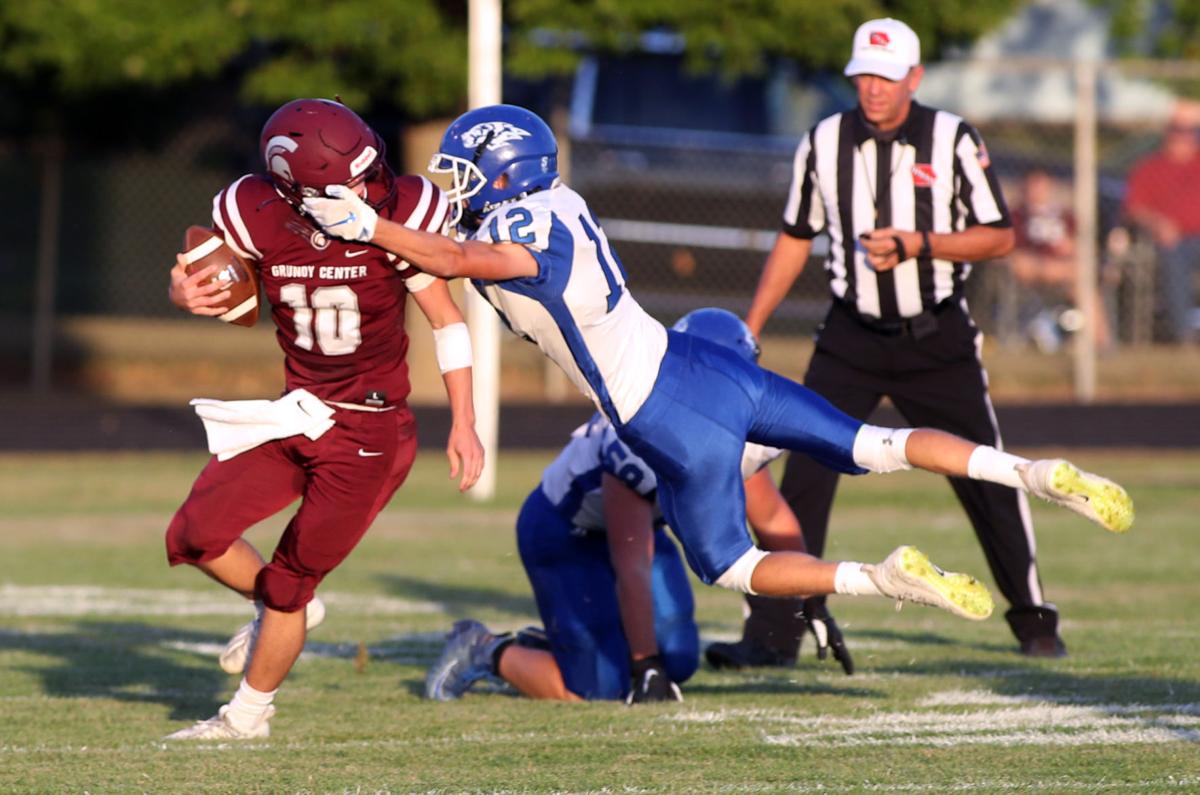 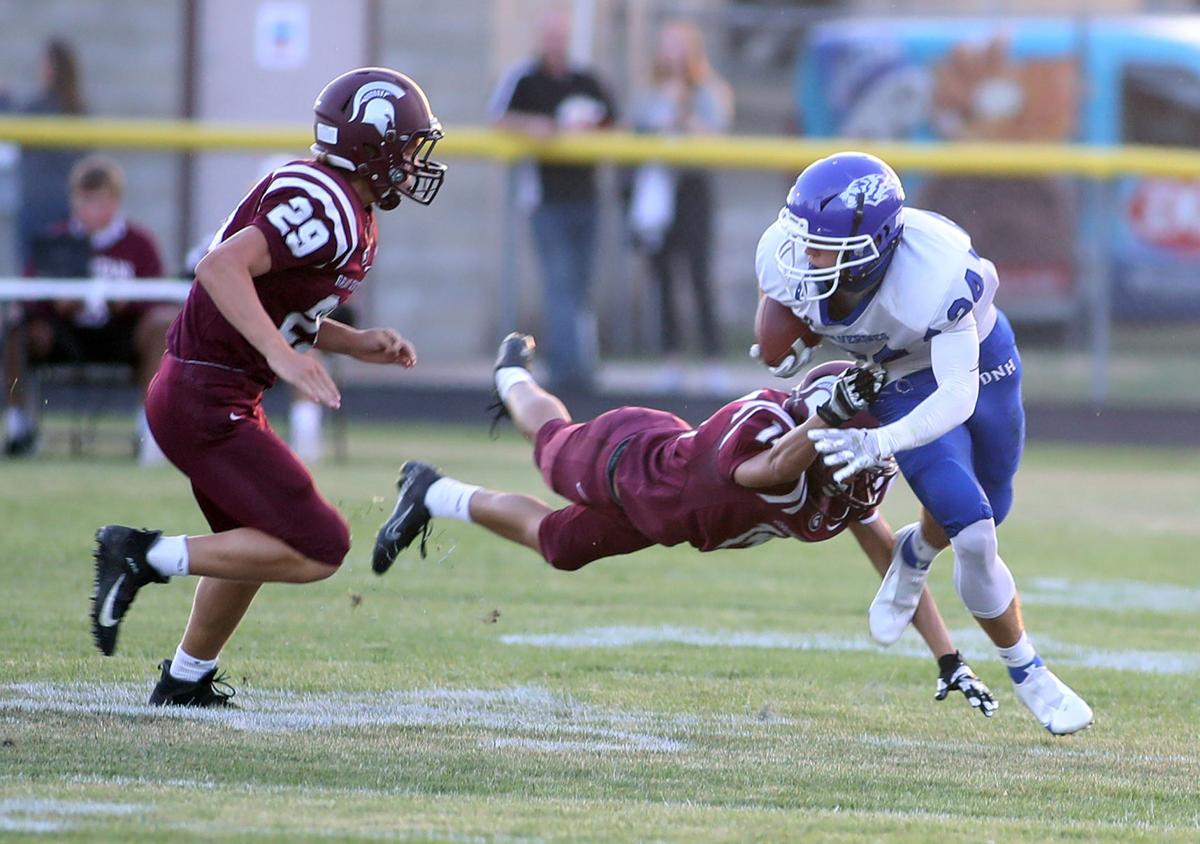 GRUNDY CENTER — Travis Zajac is now in his eighth season as a head coach, second at Grundy Center.

Following the Spartans’ Friday night continuous clock shutout over county rival Dike-New Hartford, Zajac told his defense that their execution of the game plan was better than any team he’s ever coached.

Class A’s top-ranked Grundy Center shut down the run and allowed just one big play through the air during a dominant 35-0 win over Class 1A’s No. 3 Dike-New Hartford.

“They’re so disciplined in what they do,” Zajac said, addressing the challenge D-NH provided. “Watching last year’s team, and their game last week against Oskaloosa, they keep at it. Our kids all week long, they knew what was coming. We had them well scouted, well prepared and they executed the game plan. It was a fantastic effort on their part.”

The Wolverines had just four first downs until their final series with back-ups playing. After holding D-NH to 44 yards in the first half, Grundy Center linebacker Brayden Sawyer recovered a fumble and added an interception off a deflection to gain control of the second half.

“We played fast and physical tonight,” Sawyer said. “Coach has belief in us and we all do our job.

“It (the turnovers) gave us a lot of momentum in the second half and we just had a really good effort tonight.”

Sawyer, a center, is joined on the offensive line by returning starters Trevor McMartin, Wes Willis, Austin Heltbridle and Kolby Muller. McMartin, Willis, Muller and Nick Ascher are back as starters on the defensive front.

“They played so much better than we did at the line of scrimmage on both sides of the ball that we just couldn’t make anything positive happen,” D-NH coach Don Betts said. “Then when we did get something going, we made mistakes. You’re not going to play a team the quality of this Grundy Center team and make mistakes and expect to win.”

Zajac was content letting his line impose its will. The Spartans took a 21-0 lead into halftime and extended that advantage to 35-0 by the end of the third quarter. Dike-New Hartford had just one running play over 10 yards.

“That particular group of kids, small school football in the state of Iowa, I don’t know if there’s another better starting five on offense or four on defense,” Zajac said. “They’re fantastic. They study. They have a blast together at practice. They’re just a lot of fun to be around, and when it comes time for Friday night lights, they know how to turn it on and get after it.”

With everyone up front returning from a team that was defeated in the state championship game a season ago, Sawyer said his teammates on the line spent this past summer motivated to find more success.

“We just carried it over,” Sawyer said. “We kept working in the offseason at getting better. We lifted, worked hard at home, and we kept it going.”

Entering district play, Grundy Center has become the team to beat in Class A.

“We now become just about everybody’s biggest game on their schedule,” Zajac said. “We’ve got to be ready for that and that will be an adjustment for us, but we’re excited for that challenge.”

Plenty of lessons can be learned from this game for Dike-New Hartford’s young, inexperienced team.

“We have a lot of things that have to get corrected,” Betts said. “Getting slapped up across the head by these guys is a good way to get our attention so we can do that.”

Area Game of the Week: Huskies, Mustangs battle for 150 trophy

Dike-New Hartford's Devon Kollasch is tackled by Grundy Center's Dayne Zinkula after making a catch for a long gain that was brought back on a penalty. Photographed Friday, Sept. 4, 2020, in Grundy Center, IA.