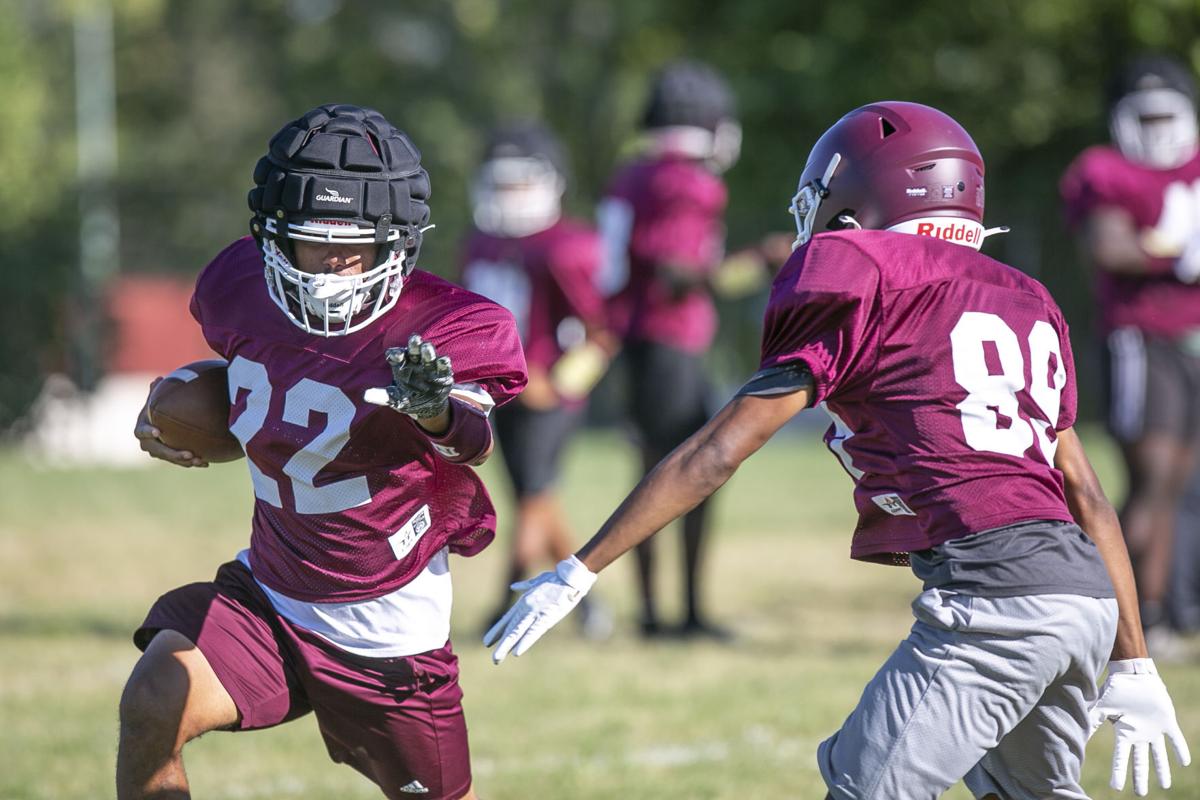 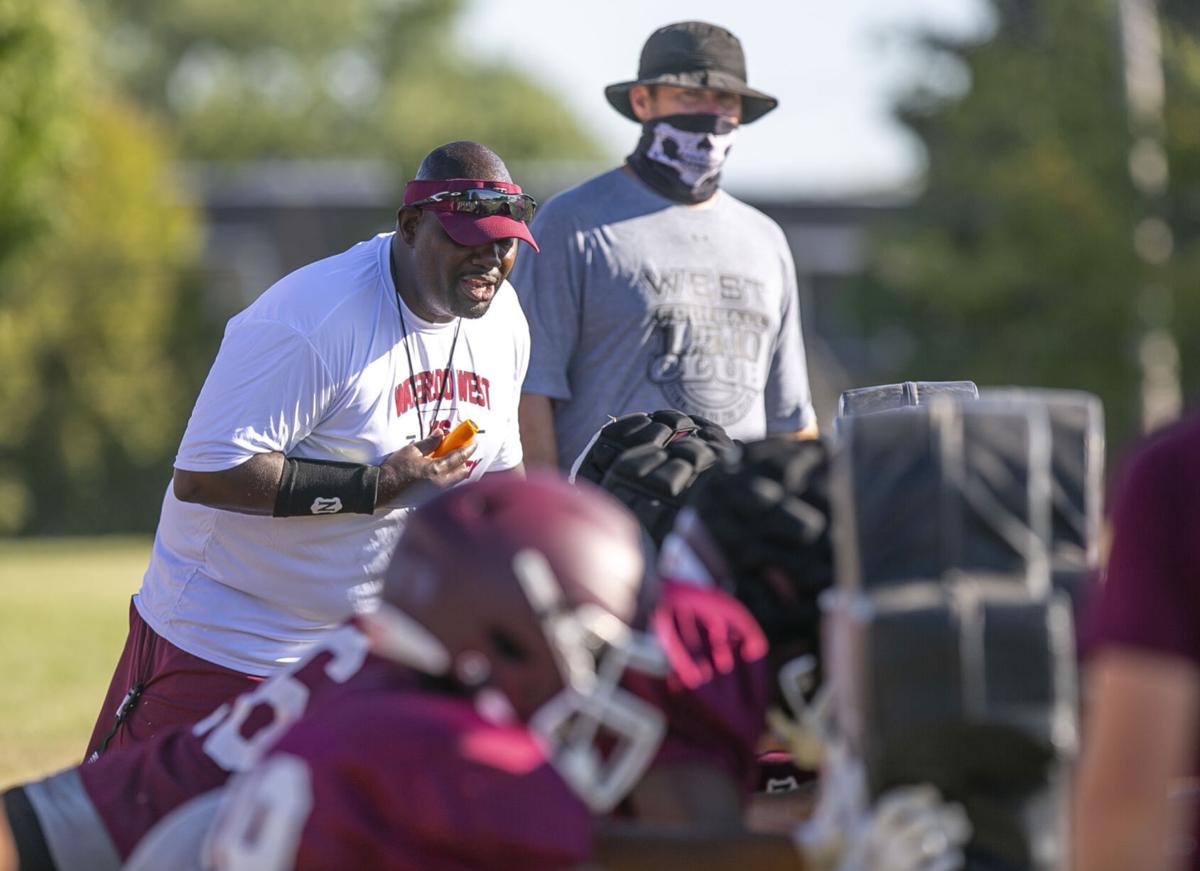 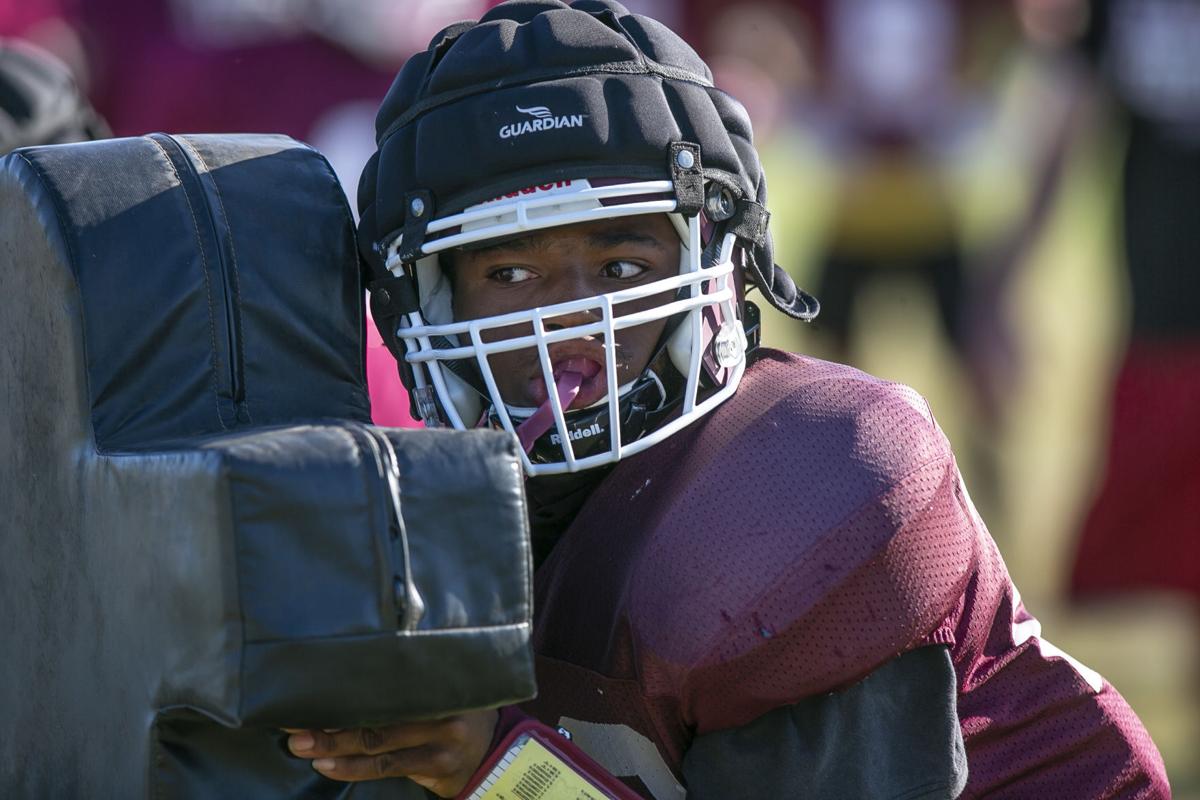 A Waterloo West player helps push the sled during practice.

WATERLOO — Waterloo West football coach Lonnie Moore has included a brief history lesson into his team’s preparation for the 2020 season.

Due to schedule adjustments made by the Iowa High School Athletic Association to provide flexibility during the COVID-19 pandemic, Class 4A teams will return to conference play for the first time since 2014 when the state began placing off of Iowa’s largest schools into districts.

Class 4A schools on Iowa’s eastern half had previously played against league opponents from 1992 through 2013.

“We’re really excited about it,” Moore said, assessing the conference-only schedule that will allow football to once again be included in the league’s all-sports standings. “None of our guys have played in this situation, so we’re kind of explaining what the MVC is like.

“I think it’s one of the best conferences in the state of Iowa. We’re going to play some tough teams, especially locally, so we’re excited about getting back to the MVC and the Valley Division.”

Cedar Rapids Kennedy, a 2019 state semifinalist team that went 10-2, returns among the Valley Division favorites with 10 starters back. The Cougars are solid on both sides of the line with first team all-stater and Iowa recruit Connor Colby anchoring the group. Second team all-state quarterback Max White will look to be more of a passing threat, in addition to his running prowess.

“Interesting to be back in the MVC,” Kennedy coach Brian White noted. “Don’t know a lot about the other teams. We haven’t played most of them in several years. … We have a talented team.”

Kennedy and Jefferson have been among the Cedar Rapids schools looking for a sense of normalcy on the football field as their community cleans up from a devastating derecho that tore through their city during the first week of official practices.

“I texted a lot of those guys to make sure everything was OK and see if there was anything we could do on our side,” Moore said. “It’s unfortunate that stuff has happened for them. I know they’re going to do what’s best for their team and their program and make sure everyone is safe.”

Coaches have noted Dubuque Senior and Hempstead may also be in mix atop the division.

First-year head coach Jeff Hoerner takes the helm of a Hempstead team that returns 11 starters, including dual-threat quarterback Aidan Dunne who passed for 1,240 yards and rushed for 665 with 19 combined touchdowns.

Across town from Hempstead, Dubuque Senior put together a 5-5 playoff season in 2019. Rams’ running back Cain McWilliams rushed for 1,014 yards and eight scores as a junior. Offensive lineman Jim Bonifas has committed to Iowa State.

Jefferson coach Chris Buesing notes team speed will be a strength of his J-Hawks following a 4-5 season.

Iowa City West also finished 4-5 in 2019 with all four wins coming within its district. The Trojans bring back 17 players who started at least two games in 2019.

“It’s all about keeping guys healthy,” Moore said. “That’s probably hurt us a lot. We got through the first three, four games with some guys healthy and with some bumps and bruises. Then some key guys went down. … We’ve got to do whatever it takes to keep our guys healthy.”

A Waterloo West player helps push the sled during practice.