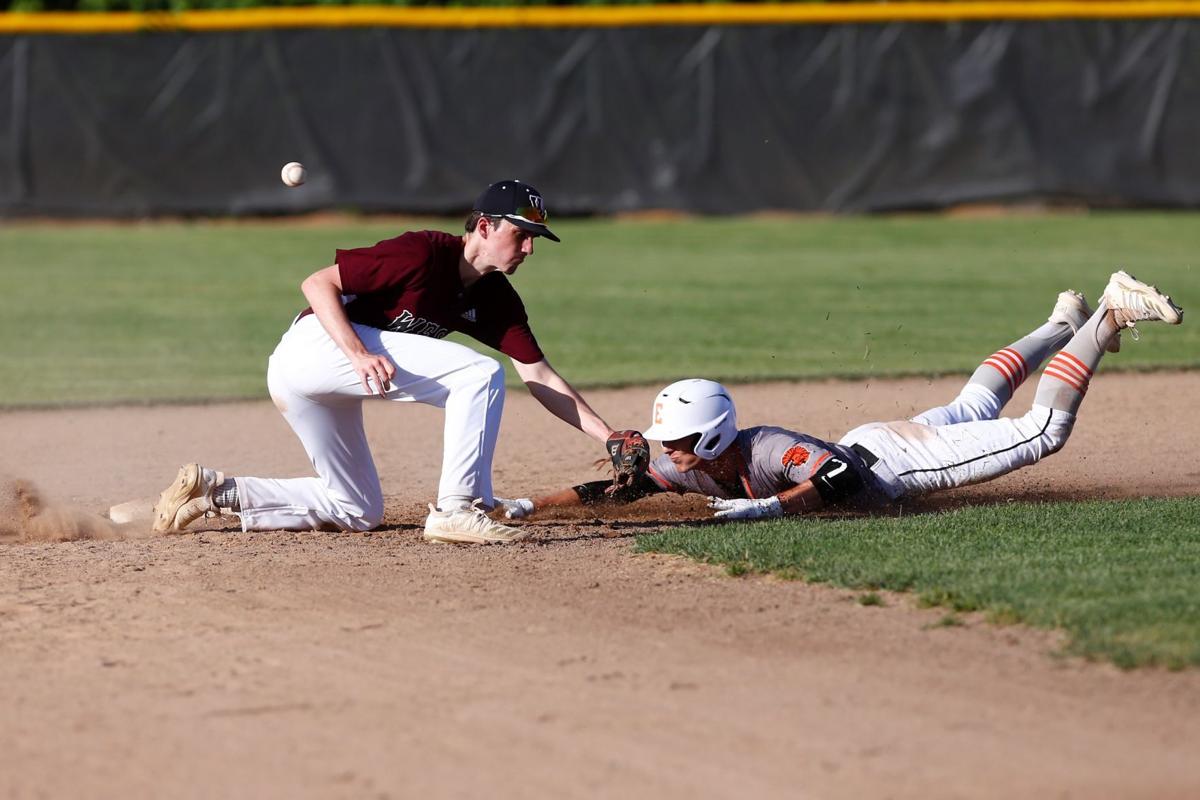 Waterloo East's Ian Lucas slides in safely to second base on a stolen base attempt as the ball bounces away from Waterloo West second baseman Sam Moore Monday in a metro baseball tilt. 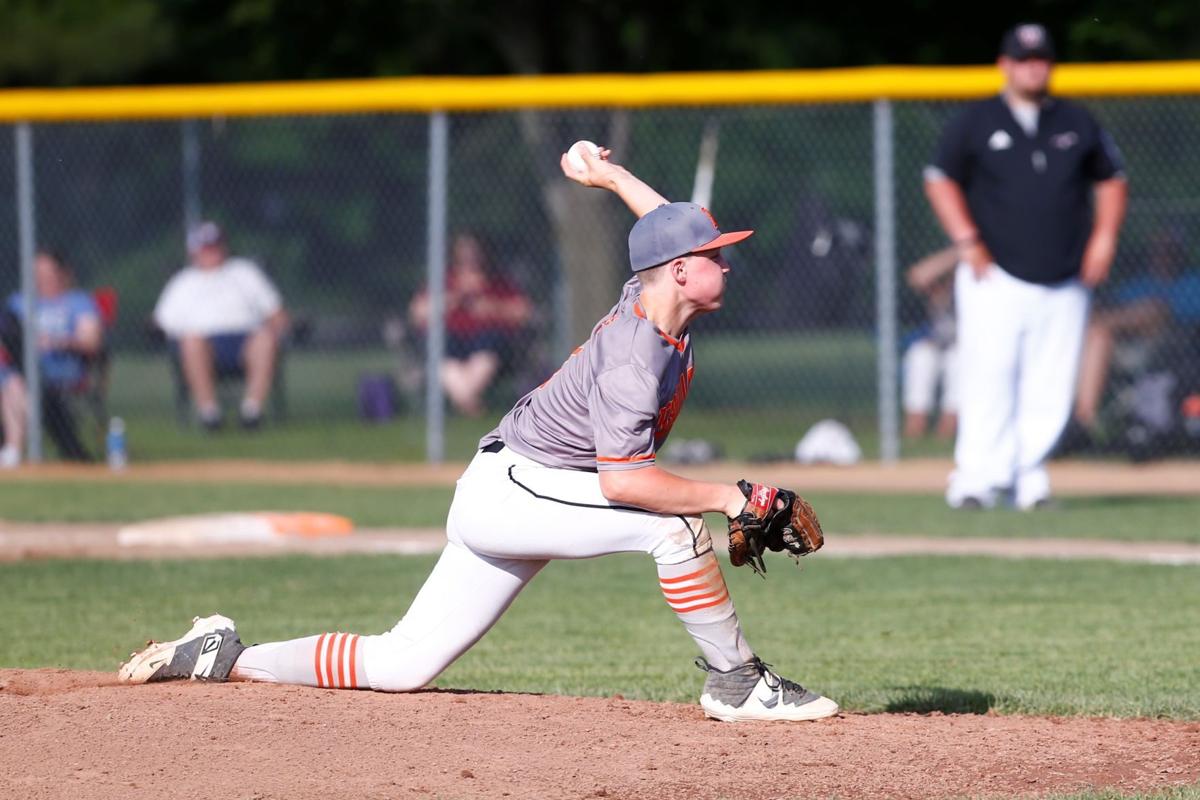 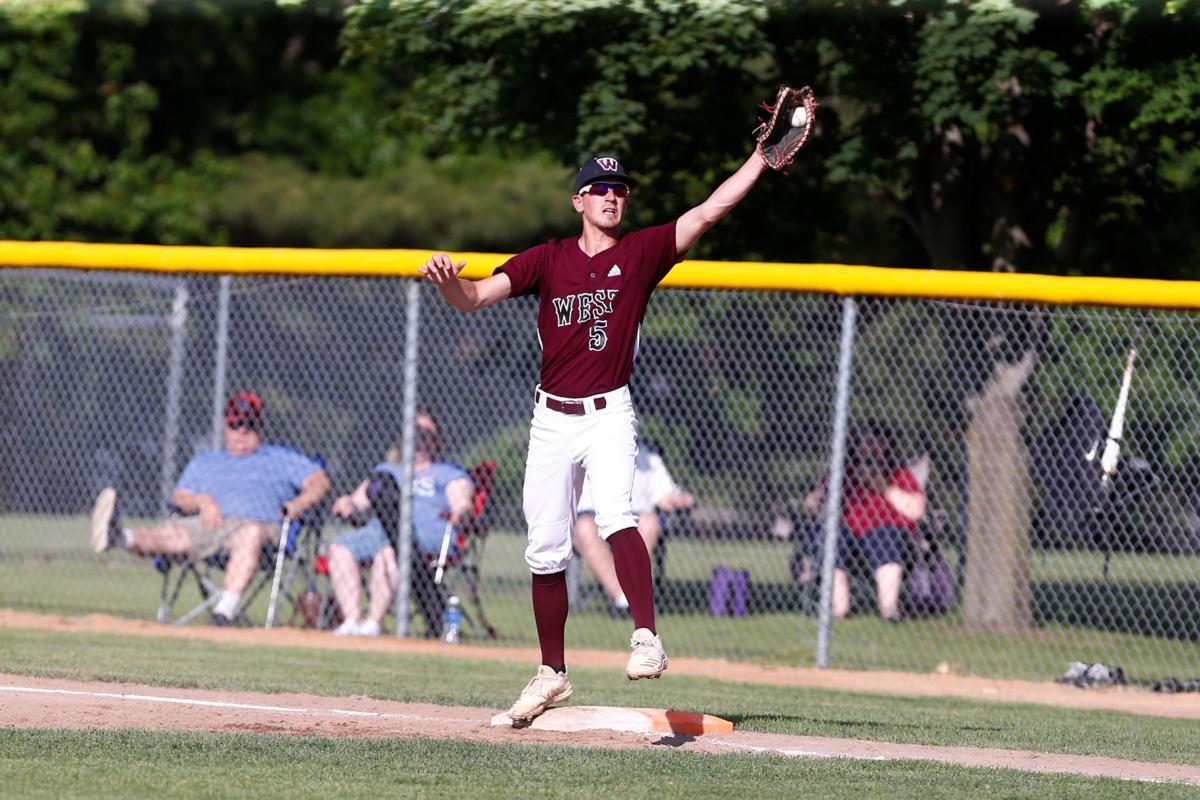 Waterloo West first baseman Carter Schulte stretches for an out during Monday's metro baseball tilt with East at East.

WATERLOO – Pitcher Maddox Harn kept the lethal Waterloo West Wahawks off the scoreboard in the top of the first.

And then Harn capped the opening inning by crushing a pitch into right-center field to drive in a trio of runners.

The 14-year-old has yet to attend a class at Waterloo East High School, but Harn already is making an impact. He staked the upset-minded Trojans to a surprising early lead.

Harn pitched well and East had its chances. But the veteran Wahawks capitalized on their opponent’s miscues to rally for a 6-3 metro baseball victory Monday night at East’s Trojan Field.

West improved to 5-2 overall in downing its local and Mississippi Valley Conference rivals. East dropped to 3-8.

“Give East credit – they came out strong,” West coach Nate Lamphier said. “But it was early in the game and we’re confident with our hitting. We fell down 3-0, but we were hitting the ball well and just weren’t finding the grass. Once we broke through there, we were able to fall back on that leadership and finish it off.”

The baby-faced Harn, who just finished eighth-grade, then stepped to the plate and delivered by hammering a ball deep into the outfield that cleared the bases.

“I was just looking to put the ball in play and fortunately I was able to drive those runs in,” Harn said. “It’s been a good experience playing on this team. We feel like we have a bright future. We just have to keep working and keep playing our game.”

East maintained its 3-0 edge until errors proved costly. The Trojans combined to commit four errors in the third and fourth innings.

West took full advantage, scoring three times in each inning to take a 6-3 lead. All six Wahawk runs were unearned.

“I got in some good counts, and tried to barrel the baseball and that’s what I did,” Moore said. “We’ve been swinging the bats really well as a team. We had a lot of different guys contribute.”

Wahawk starter Ben Melcher overcame a slow start, following the rocky first inning by not allowing a run over the next five innings.

Teammate Nolan McCann pitched a scoreless seventh to earn the save for West.

East still had its chances after trailing 6-3. The Trojans had two runners on base in each of the last two innings, but failed to score.

Harn pitched five strong innings and struck out four in a solid performance where he deserved a better fate.

“Maddox is a fun guy to be around and we’re excited about his future,” East coach Eric Jesse said. “He continues to grow and improve. He pitched well and he had a big hit for us.”

East and West will switch venues and meet again Tuesday night at 7 at West High School.

“Obviously, West has a very good team and we’re going to turn right around and face them again,” Jesse said. “We can’t give a team that good extra outs. And that really was the difference in the game. Those two bad innings killed us. We have to learn from this and come back strong.”

The Wahawks hit four doubles, a triple and a home run in a 9-5 victory over the Trojans Tuesday.

Support local journalism that you can't find anywhere else. For less than a cup of coffee, you can buy a digital subscription through our flas…

Waterloo East's Ian Lucas slides in safely to second base on a stolen base attempt as the ball bounces away from Waterloo West second baseman Sam Moore Monday in a metro baseball tilt.

Waterloo West first baseman Carter Schulte stretches for an out during Monday's metro baseball tilt with East at East.