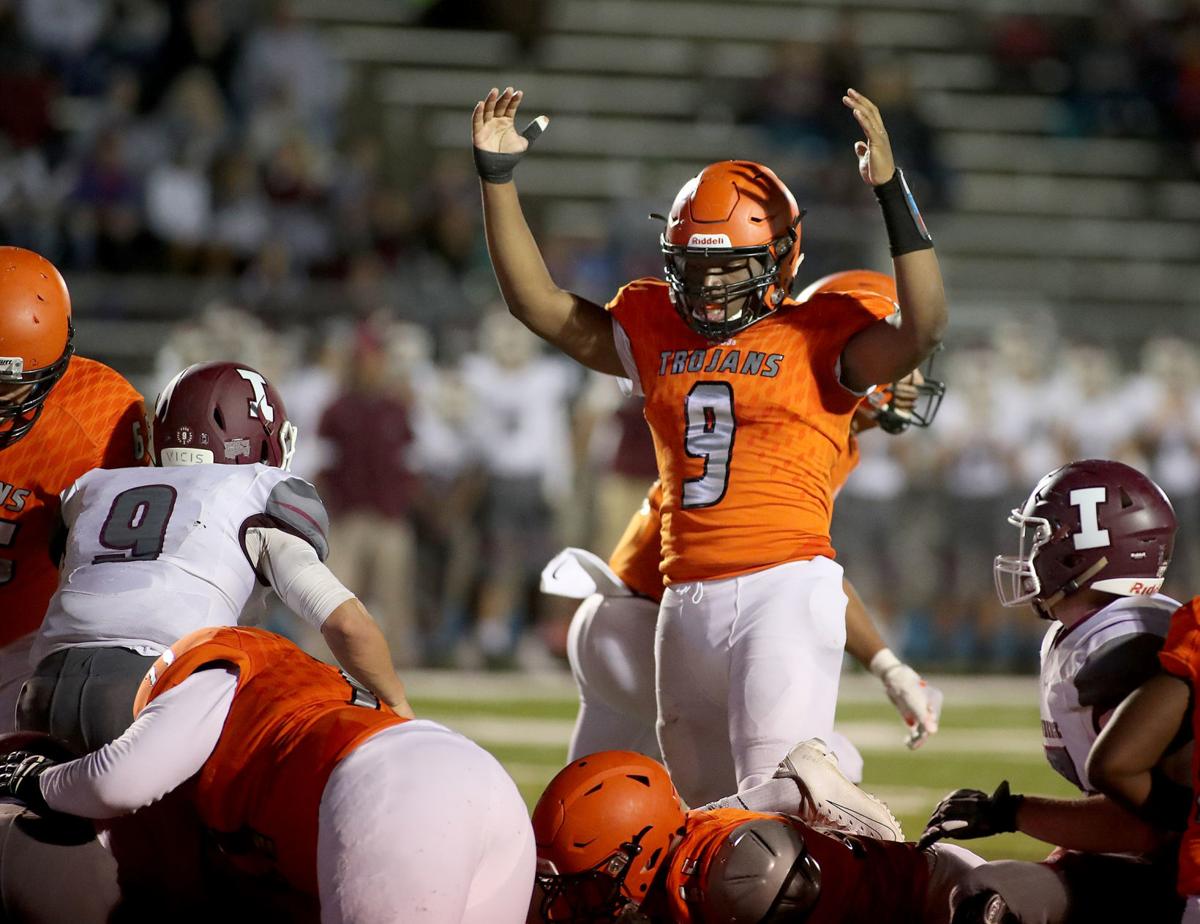 Waterloo East's Kjuan Owens signals a touchdown against Independence during a 2019 game at Memorial Stadium. 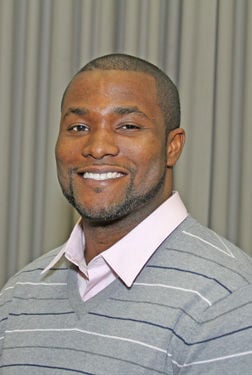 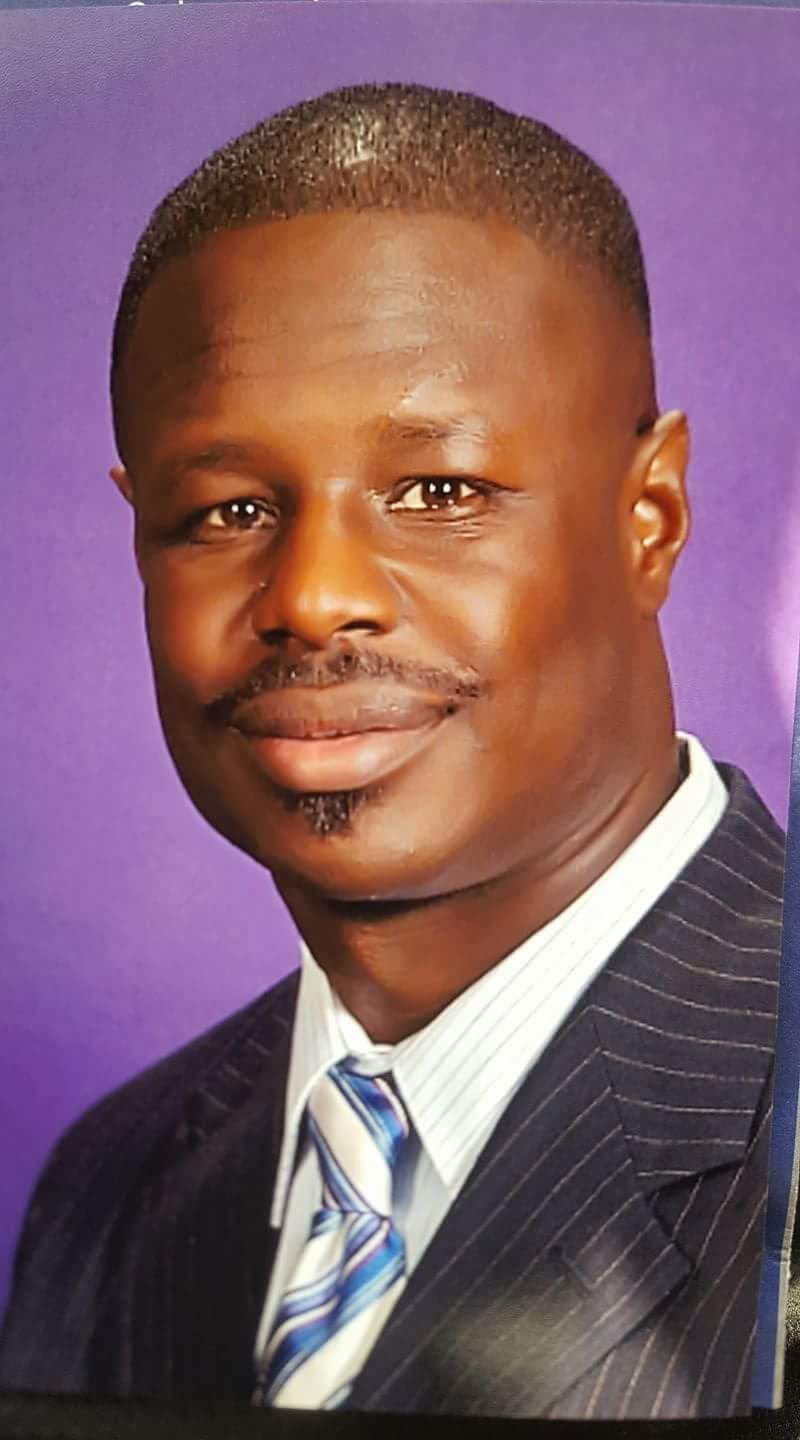 WATERLOO — Approval of personnel appointments rekindled a lengthy discussion on the status of athletics at Waterloo East during Monday’s Board of Education meeting.

A vote on the amended portion of those appointments — including the search committee’s recommendation to hire Brent Carmichael as East’s head basketball coach and Regis Baskerville as East’s football coach — has been postponed.

The board hadn’t received information on those appointments until four hours prior to the meeting’s 5 p.m. start time. Waterloo Chief Officer of Human Resources and Equity Kingsley Botchway confirmed this was due to HR not receiving all the acceptance of offers until late Monday morning.

Board President Shanlee McNally said a time to meet regarding those appointments, and perhaps other policy issues, is scheduled to take place within 72 hours of Monday night’s meeting.

It’s not who has been recommended to fill the prominent coaching positions, but rather who wasn’t that has sparked discussion among community members and alumni on social media over the weekend. Among the finalists for the jobs interviewed by the search committee were applicants that grew up in Waterloo, found athletic success and have been invested time with youth in the community.

“I don’t know if I’ve ever received as much pushback that I have on this situation,” said third-year board member Astor Williams, who represents District 1 that includes portions of East Waterloo and Evansdale. “I have never seen this type of communication, this type of distrust, how these individuals are viewing the school district, the school of East High and just where we’re at right now.

Botchway responded that feedback from supporters of candidates who haven’t been selected is fairly consistent with personnel appointments. He said he inserted himself into the process because he knew about the high level of these coaching positions and wanted to make sure everything went to plan.

“We focused on the work of the coaches to make sure we get students into college,” Botchway related. “Not just (NCAA) Division I — Division II, NAIA, across the board. That has not been a consistent focus, but I know under Mr. Huff’s leadership and Mr. Moses’ leadership that’s definitely a cause for concern, definitely something we want to focus on.”

Regarding the end result of the committee’s work, Botchway added, “Two candidates from both (basketball and football) interviews came to the forefront. We met as a team. Mr. (Josh) Payton (East assistant principal) was involved in that one as well as Mr. Parker, Mr. Huff, Mr. Moses to decide the particular candidate that would be recommended to the board.

“In that conversation, we take a lot of comments from the committee, but we also get additional information that we receive from different sources in regards to candidates’ background and things along those lines. We review that information and we make a decision that we feel is in the best interest of, not just the teachers and community, but also the kids.”

Continuing a dialogue that began during May’s board meeting regarding coaching turnover at East, Botchway noted it’s important Moses and Huff have an opportunity to change the athletic department for the better.

“I heard from multiple board members that it is necessary that we change the culture at East High,” Botchway said. “I can guarantee you we have been about that work. What has happened over the course of two years, and maybe it culminated in a few months, is tons of hours and work to change the trajectory of the program.”

They currently reside in all corners of the country from Washington, D.C., to Dallas-Fort Worth to Northern California.

These successful professionals grew up in Waterloo learning valuable life lessons while bonding as teammates on the football field. They view the leadership of a coach willing to be a strong mentor for youths as a key toward progress in their hometown, and feel an opportunity has been missed.

A group of Waterloo East alumni set up a Zoom meeting on Monday afternoon to voice their disappointment after a pair of fellow Waterloo natives who were finalists for Trojans’ vacant head football coaching position were passed over.

“I don’t know that the community recognizes the role this coaching position can have in turning our community around,” said Maurice Spencer, a 1995 East graduate who works as an attorney in New York. “I feel like getting a coach that’s from Waterloo, from the same place that these kids are from and can look them in the eye and tell them, ‘Listen, I’ve stood in your shoes. I made it and I’m going to show you how,’ … I think that type of foundation is the type of foundation we need to build on.”

Growing up in Waterloo, Spencer witnessed firsthand talented athletes who ended up following a different path.

“We need a coach who is going to make going to school and playing football cooler than being a criminal,” Spencer added. “There are two candidates that do have that. They were turned down.”

Deondre Jones, a 1994 East grad, knows how quickly things can change. He works as an administrator within Omaha Public Schools. Jones coached at an Omaha North program that rose from a one-win season to win three of the last seven state titles in Nebraska’s largest class.

Rafael Parker, a 2000 East graduate, credits having a father as a role-model in his household as a factor that helped him stay on course in the classroom, on the football field and basketball court. He points out not many of his friends had that same experience.

“Those that are without fathers need someone that they can turn to and are going to be dedicated towards hearing their side of the story and also keeping them on the right path — not necessarily for the football program, but also the educational standpoint,” Rafael Parker said.

“Football was just a steppingstone for us to survive in life,” added Rafael’s brother, 1996 graduate Johnny Parker. “We all care about this community. … I think East made a great step by hiring Tim Moses as (athletics) director because you bring home somebody that does know what it takes to be a Trojan. At the end of the day, if he doesn’t have the final say as an AD and you have somebody that does not know the climate of how to be what we consist of, they’re going to make the wrong decisions.”

Marcus Sallis, a 1994 graduate who has worked as a professional sports agent in the Dallas-Fort Worth area, gravitated towards a larger city to find success and raise a family. He conveyed respect for those that have returned to their hometown and set out to make a difference.

“We lose a lot of coaches, teachers and people in Iowa because we don’t care for our own like we should,” Sallis said. “It’s unfortunate that sound coaches and teachers have got to go somewhere else to fulfill a dream and to continue to be impactful in a community, but they want to do it in Waterloo. At the end of the day, they end up going somewhere else.”

Gerald Bates — a 1983 East grad who wrestled on the Trojans’ state championship team in addition to competing in football — echoed that sentiment.

“I applaud what you guys are doing and pray that you continue to push the button, continue to advocate to keep these young men that are putting in the work in our community,” Bates said.

Some of these alumni had fathers and uncles who were part of the era when East once fielded the state’s most feared football program with an Iowa record 55-game win streak from 1965-71.

East’s recent reputation, however, has been that of a program in which the coaching position has been a revolving door. The Trojans snapped a state record 60-game losing streak that spanned seven years and three head coaches in 2006.

Xavier Leonard’s first season as head coach in 2016 ended with East forced to forfeit its final game due to low numbers as the Trojans went four consecutive years without a victory. Some progress has been made over the past three seasons. East went from winless to a pair of narrow losses shy of a playoff appearance in 2020.

“I am concerned that the community that has helped me be successful has lost its way,” noted 1994 East graduate Jeremy Frisbey in the public comment portion of Monday’s Waterloo School Board of Education meeting. “The football program at East is not just about wins and losses, it is about building better people for the community.

“The school needs a coach that has ties to the city, can relate to all the young men and women that are hurting and get them out of the cycle of poverty. The coaching staff needs to be willing to go that extra mile and not use East as a stepping stone to what they perceive as bigger and better things. … East has lost its way, and as with a lot of other alumni, I want that changed. We deserve it for our kids to give them the best advantages we can.”

“I think everybody’s heart is in the right place on this,” said 1994 East graduate Patrick Hess towards the end of Monday’s Zoom meeting. “We’re not here to degrade these guys that they might be hiring, but rather to uplift the guys that we think should be hired.”

Sailors tally five runs in the seventh inning to secure a dramatic victory.

No players have tested positive.

Waterloo East's Kjuan Owens signals a touchdown against Independence during a 2019 game at Memorial Stadium.