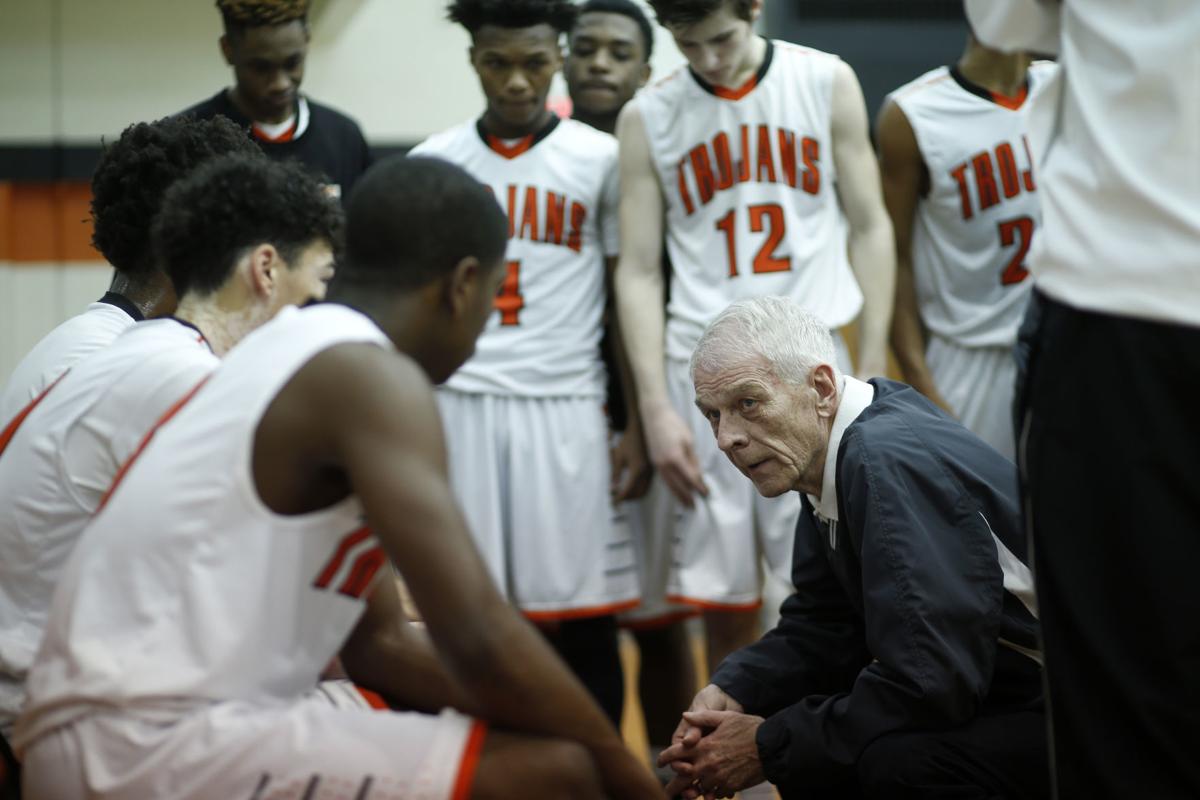 Waterloo East head coach Steve McGraw, right, talks to his team during a break in the first half of a 2017 game. 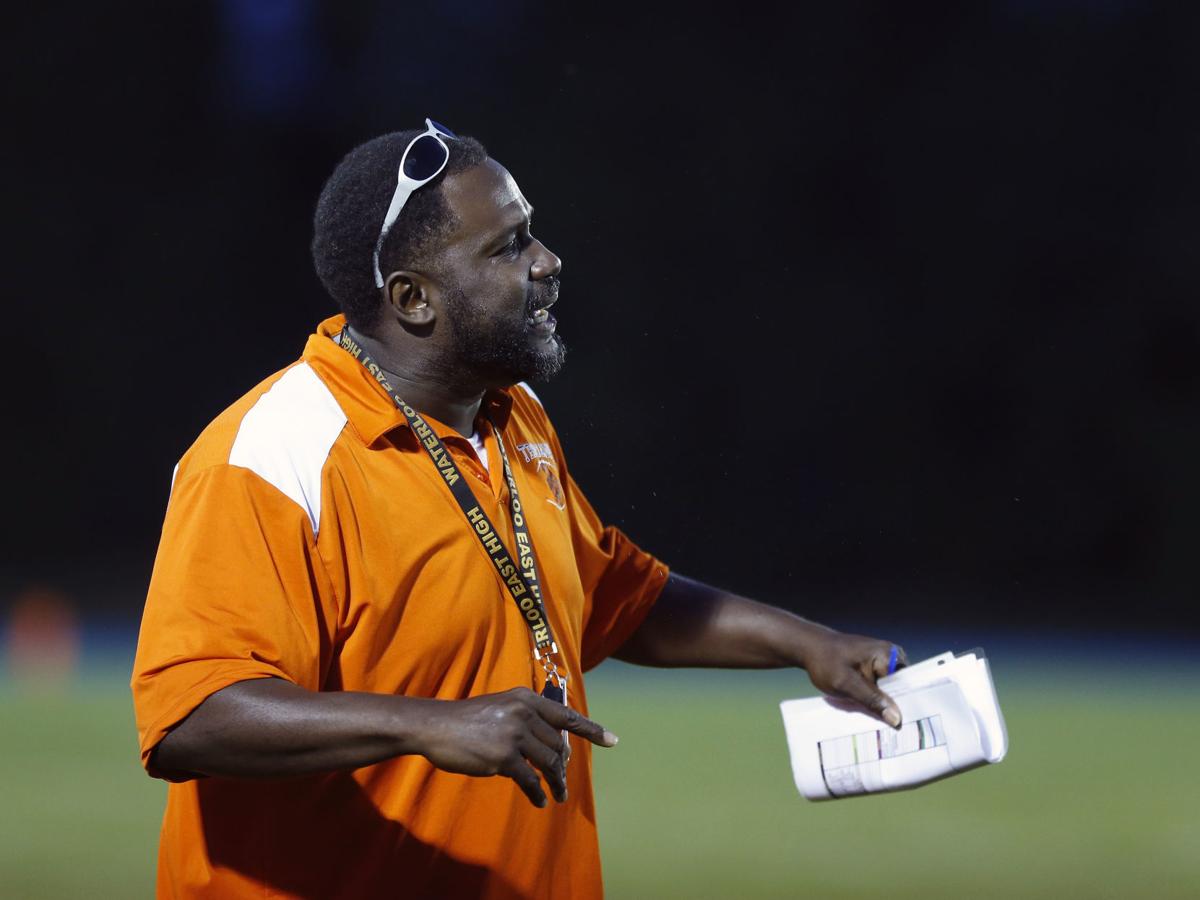 Waterloo East coach Xavier Leonard directs his players during a game against Newton in 2017. 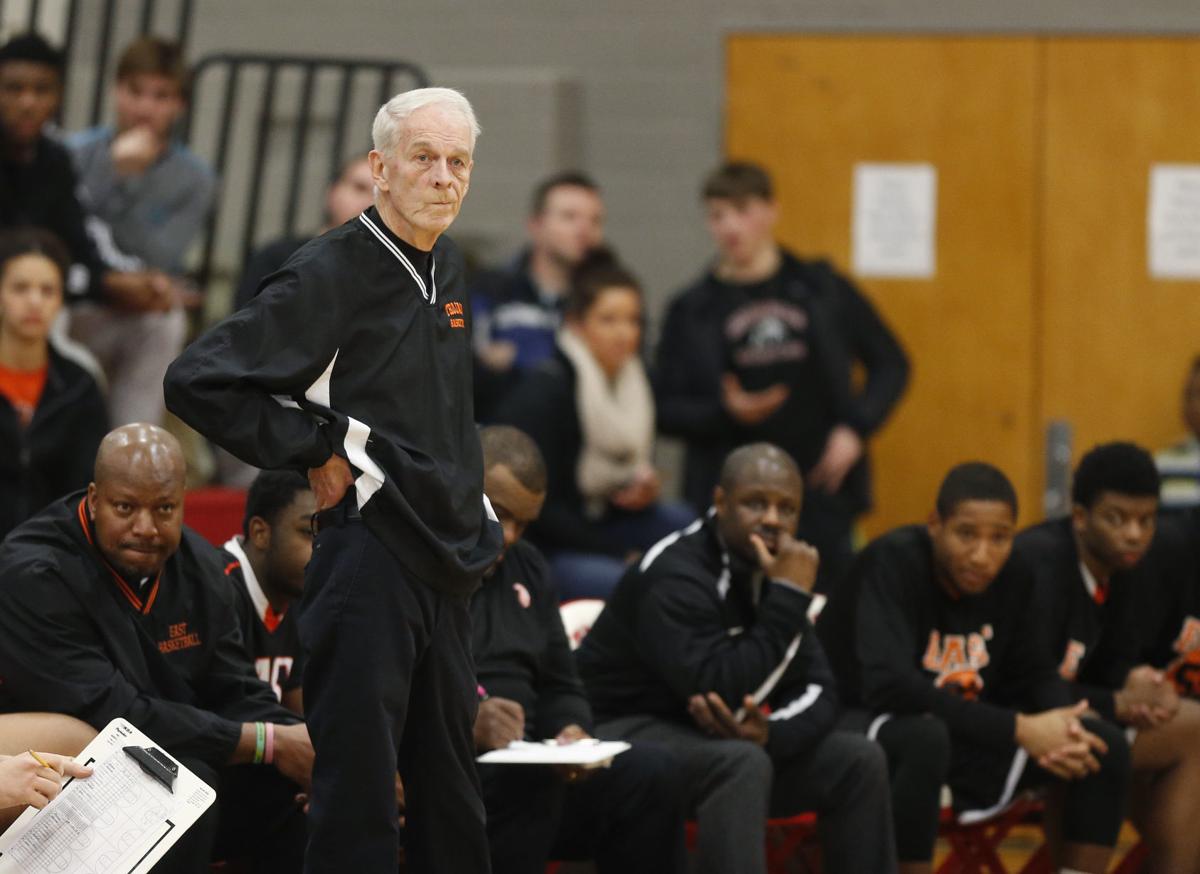 WATERLOO — Waterloo East’s athletics department is in the process of charting a new direction.

That vision doesn’t appear to include one of the state’s most successful basketball coaches along with a football coach who has shown recent progress.

Within the listing of personnel appointments approved during the Waterloo Community School District’s May 11 Board of Education meeting, longtime boys’ basketball coach Steve McGraw and football coach Xavier Leonard didn’t have their coaching assignments renewed.

Leonard says he was notified over a Zoom call a couple weeks ago with WCSD administrators that his football coaching position would be opened. He reapplied for the job, but has yet to receive an opportunity to interview for the position he held over the past four seasons.

The football coach was unaware his job was in jeopardy. East went from winless in 2018 to a pair of narrow losses shy of a playoff appearance last fall.

“I didn’t foresee this coming,” said Leonard, who was named the 2019 co-district coach of the year by his peers. “I thought we had a decent season. We were coming along. Growth was happening, but sometimes people want to go a different direction for whatever reason.”

District athletics and activities director Dan Huff declined comment on the personnel matters. He released a statement addressing East’s current openings, “East High is currently seeking to attract and hire head coaches for football, boys basketball, wrestling and girls tennis. We are confident that we will be able to hire high quality candidates for each of these positions.”

When he retired from an administrative position at the end of the 2008-09 school year, McGraw was forced to reapply for his coaching job at East and the committee opted to go a different direction. He was passed over when the position opened again three years later, before succeeding in his third attempt to regain control of the basketball program in 2014.

A 2010 Iowa High School Athletic Association Hall of Fame inductee, McGraw ranks 11th on the state’s all-time wins chart with a career record of 629-375 over a 46-year coaching tenure. He began coaching at East in 1979 and compiled a 514-273 record with the Trojans.

Tough love could be used to describe McGraw’s approach during a career in which he took East to state 13 times with championships in 1990 and 2003. He was just as likely to bench a star player as someone who only played a handful of minutes, holding members of his teams accountable for taking care of academic responsibilities and working to find success on the court.

“Anybody involved in coaching for any length of time hopes in some small part that they have made that guy or that girl a better person,” McGraw told former Courier sports editor Doug Newhoff during an interview prior to coaching his 1,000th career game in February. “I don’t think it’s the job of a coach to be their friend, and I don’t care if some of them didn’t like me much.

McGraw’s most successful teams often outworked opposition with smothering full-court defense producing points in transition. East made 12 state tournament appearances and five trips to the championship game over a 16-year run of dominance from 1989 through 2004.

The Trojans finished 11-10 in the 2008-09 season prior to McGraw’s departure and didn’t produce another winning season until after he returned. While this past season’s East team went 6-16, McGraw saw potential within a roster that didn’t have a senior among its top seven scorers.

“Sometimes it’s hard to see with young kids because they’re inconsistent and their effort and attitude isn’t always there,” McGraw said, after East challenged eventual state semifinalist Cedar Falls throughout a competitive six-point loss in February. “They think you’re picking on them, but as they get older and more experienced those things get better. Tonight should go a long ways in explaining to them, ‘Hey, this is the No. 2 team in the state (Cedar Falls) and they’re good, they’re big, and we battled them.’”

On the football field, East appeared to be turning a corner under Leonard’s leadership.

After guiding Belmond-Klemme to playoff runs in his first two seasons at that school, Leonard took on a new challenge at East where he inherited a program that hadn’t won a game over its three previous seasons with two different coaches at the helm.

Numbers were so low during Leonard’s first season that East had to forfeit its final game against Cedar Falls with just 16 available players on the roster. This past season Leonard maintained a varsity roster of 50 in addition to nearly 30 freshmen.

“It got to the point where we were running out of helmets,” Leonard said. “My first year I had plenty of helmets; lately we’ve been running out. That’s a good thing when you’ve got kids coming out for football and participating because numbers help.”

Led by a 17-person senior class, the Trojans were competitive throughout last fall’s slate. Tradition-rich Decorah edged East by a touchdown and West Delaware won by a single point in the season finale of a 3-6 campaign that included three losses by seven points or less.

“I had a good group of seniors,” Leonard said. “They were freshmen when I came in and I guess I’m going out with them.”

Leonard acknowledged change goes with the territory in coaching. He still serves as a school administrative manager within the district, assisting with student behavior.

Change has been occurring at the top.

In 2018, Huff was hired as the Waterloo Schools district athletics director, Joseph Parker was named East High’s principal and Kingsley Botchway II entered as the chief officer of human resources and equity.

Tim Moses will take over as East’s athletics director for Brenton Shavers in July while also providing input during the process of filling current coaching vacancies at the school.

“In the past couple board meetings we’ve seen quite a bit of proposed turnover at East,” Waterloo school board member Astor Williams said, during the most recent Board of Education meeting. “I’m just curious to know what we are looking for going forward?”

Botchway responded, “There’s a change that is occurring as far as the vision for East High. I know that many of you know the history of East High and what it has meant to athletics, not only in the community but also for the state.

“I don’t want to put that entire burden on Tim Moses, but it’s something that he’s spoken candidly about as far as the standards, the expectations of how we — not only as students should be moving and representing East and representing Waterloo Community Schools — but also how coaches should, as well. We will be working earnestly over the next couple weeks/months to get many of those positions filled.”

Lyle Schmitt was the lone board member to vote against the most recent personnel appointments that included a non-renewal of coaching assignments for McGraw and Leonard.

Schmitt expressed a need for proper policy and process to be in place. He suggested defining district and sport-specific goals with yardsticks of measurement that could include items such as win-loss record, academic performance of athletes, squad sizes and college scholarships.

“Everybody needs job security,” Schmitt said. “I think any coach interviewing right now with the changeover we’ve experienced would have to consider it a high-risk job.

“I would suggest it’s important to put the policy in place, put all the goals and objectives down, and then hire to get a best fit for those specific goals and objectives. Otherwise you’re saying, ‘Come and coach for us, but we’ll determine later whether you’re doing well based on some unspecified (measurement).’”

Botchway responded, “There’s definitely some room for improvement. We do have some things in place that have led us to what we’ve done so far. But I think going through this process recently and looking over my tenure for the last two years, I’d wholeheartedly agree with you. There’s definitely some things we need to clean up, not only for East, but looking at athletics across the board — even as an AD that we’re clear on our expectations.”

$1 million curriculum proposal gets full hearing before Waterloo school board

After its purchase was pulled from a prior Board of Education meeting, the case for a $1.18 million elementary school literacy curriculum got a full hearing Thursday.

Waterloo East head coach Steve McGraw, right, talks to his team during a break in the first half of a 2017 game.

Waterloo East coach Xavier Leonard directs his players during a game against Newton in 2017.