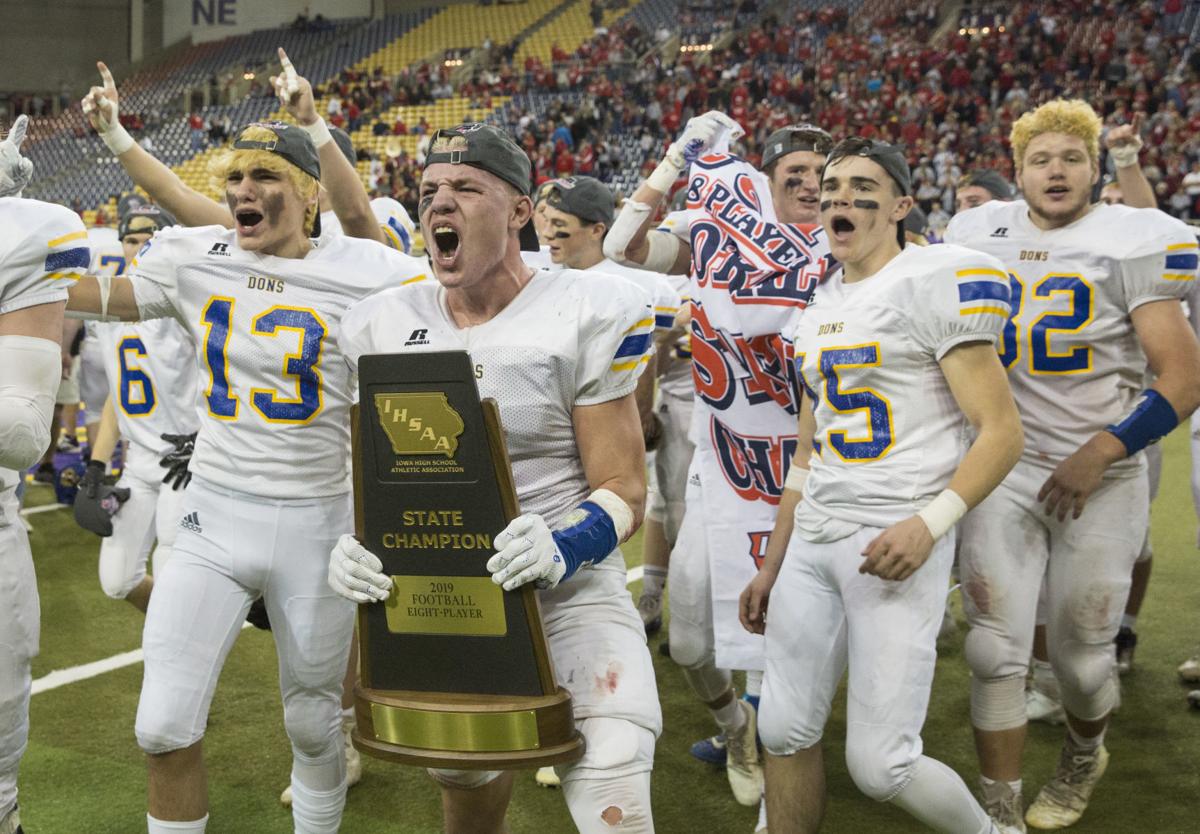 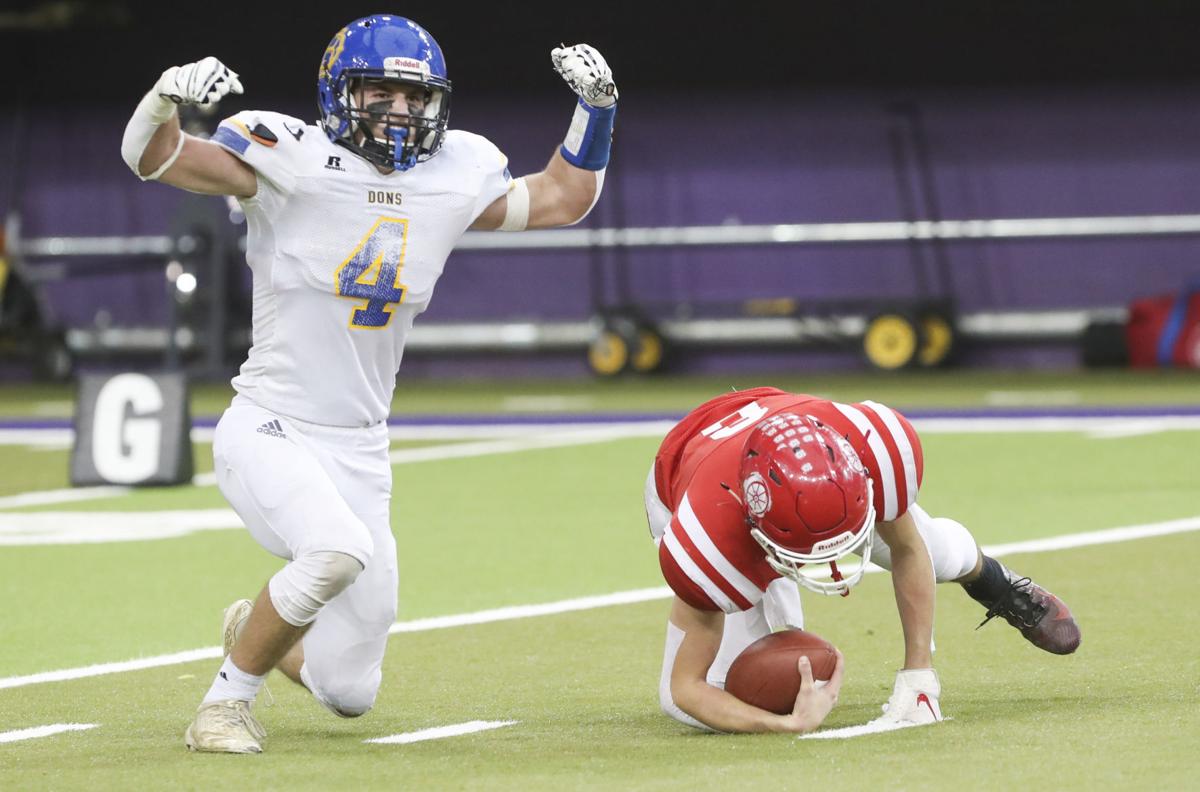 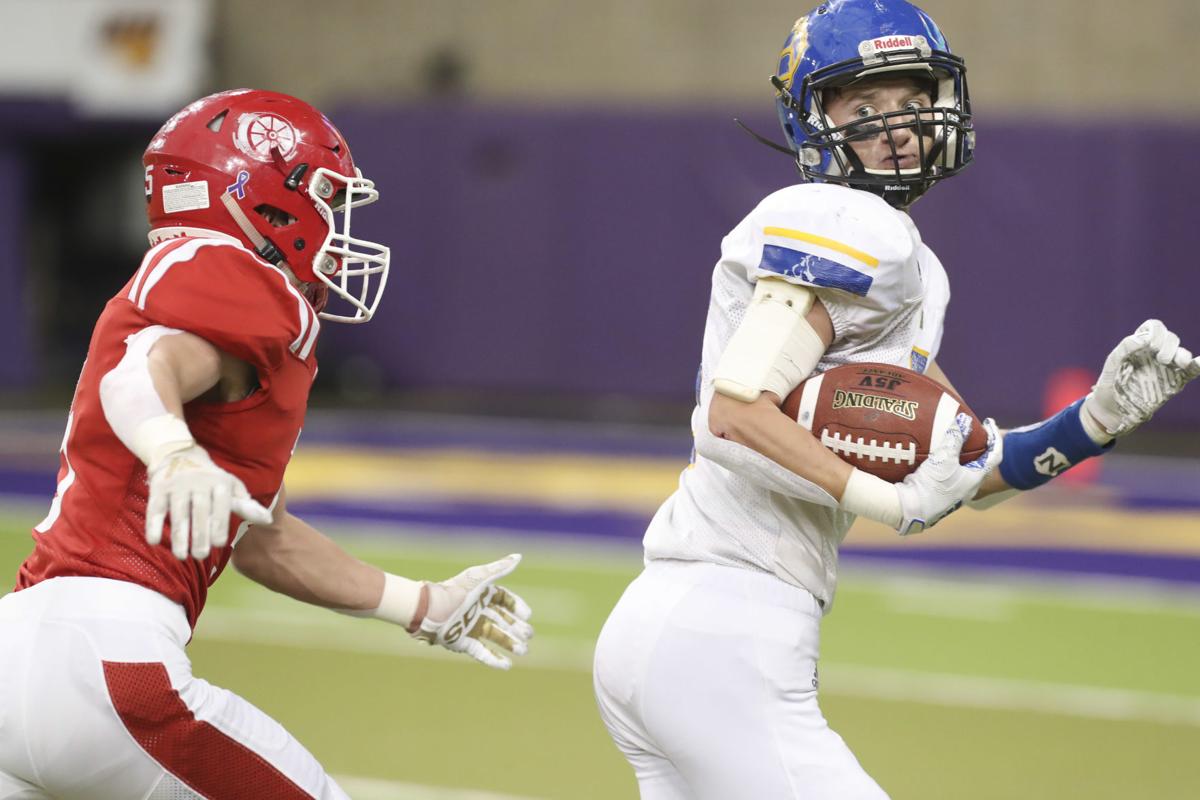 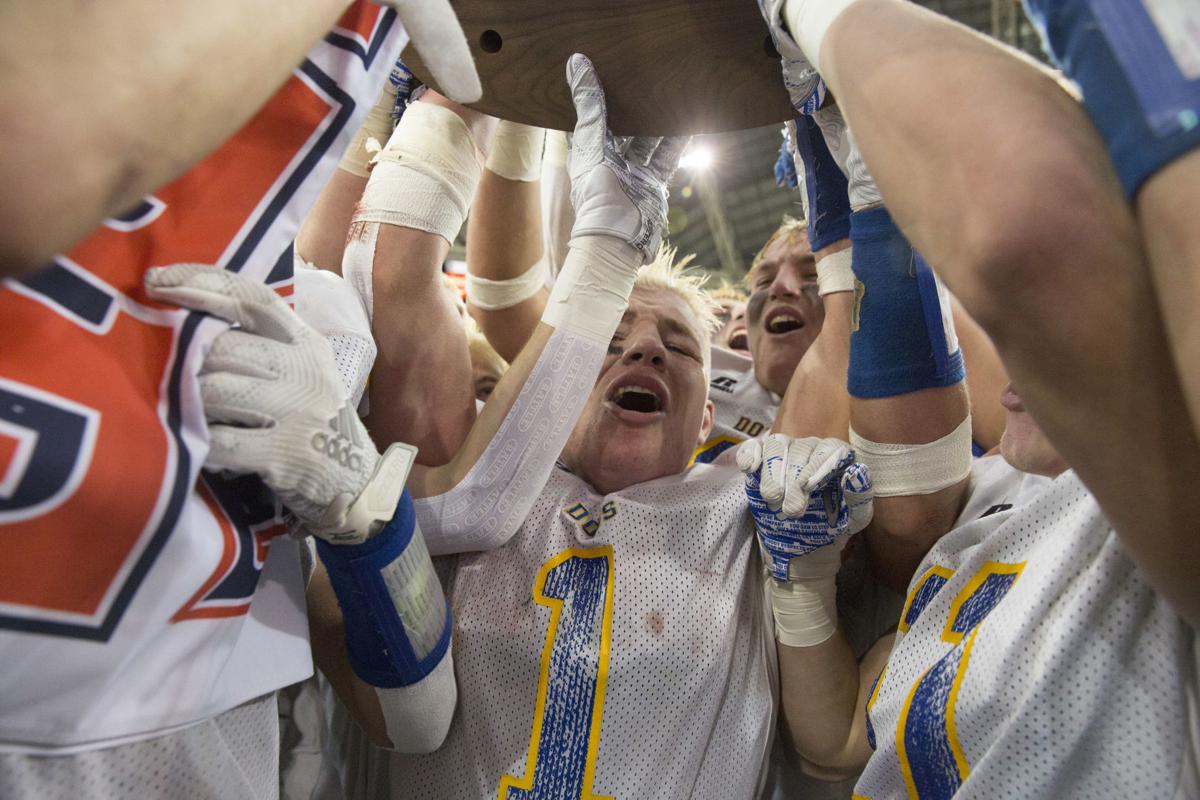 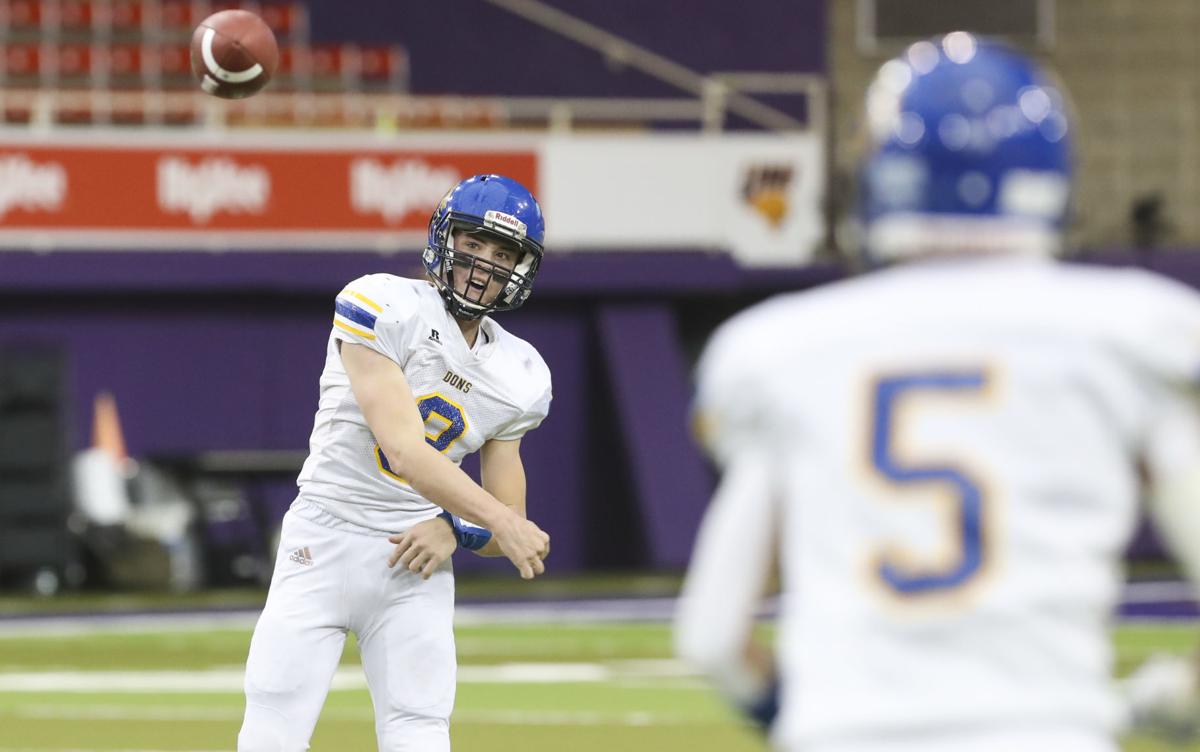 Don Bosco's Cael Frost passes to Lewis Havel during the 8-player state championship game against Audubon in the UNI-Dome.

But it was far from easy for the top-ranked Dons.

The Dons shook off a slow start before earning the school’s fourth state title on Thursday morning at the UNI-Dome.

On a mission after being upset in the quarterfinal round last season, Don Bosco finished in style Thursday.

“These kids were on a mission and I’m extremely proud of them for the season they had,” Don Bosco coach Colby Yoder said. “Audubon came out strong, but our players really responded. It was a tough, physical game, but our players were ready for the grind and the challenge. Our players made the big plays when we needed to and did an outstanding job. This was an emotional win – it means a lot for our program.”

“Thomas is one of the best players we’ve ever had,” Yoder said. “It was fitting that he played another great game in his last time out for Don Bosco. He’s made huge contributions to our program. He missed the quarterfinal game last year with an injury and he was determined to help us get back on top.”

No team had come within 39 points of Don Bosco this season, but that changed when Audubon charged out aggressively to challenge the Dons on Thursday.

Leading 27-19 early in the fourth quarter, the Dons embarked on a clutch 65-yard scoring drive to put the game away.

Don Bosco quarterback Cael Frost delivered the key play in the drive, breaking loose on a 35-yard run. Even then capped the march, powering in for his fourth touchdown on a 3-yard run.

The Dons intercepted Audubon on three straight Wheeler possessions in the fourth quarter.

Frost finished with 124 yards passing and another 97 rushing.

“It was a tough battle and Audubon came out strong,” Frost said. “We had to fight and keep pushing. We didn’t play as well as we might have wanted to, but we’re state champs. We’ve been working hard all year to win state. To be part of this team is something special.”

Even excelled on both sides of the ball, collecting seven tackles and an interception from his linebacker spot. He also unleashed a 69-yard punt late in the game.

“This an amazing accomplishment to win state again,” Even said. “We worked so hard for this. To finally get here, it means the world to me. My teammates are my brothers. We’re such a tight-knit team and we wanted this more than anything. This is an awesome way to finish my career.”

Playing in its first state title game in 42 years, Audubon marched down and scored on the game’s first possession. Kaiden Smith hit Ethan Klocke on a 7-yard scoring pass to give Audubon a 6-0 lead.

Don Bosco responded by scoring three unanswered touchdowns. Even scored on a pair of short runs with Frost connecting with Lewis Havel on a 29-yard touchdown on a fourth-and-9 pass.

The Wheelers answered shortly before halftime. Tanner Petersen stormed in and blocked Even’s punt. On the ensuing play, Skyler Schultes hit a wide-open Joel Klocke for a 14-yard TD to cut Don Bosco’s lead to 20-13.

“We came in here with a good game plan,” Schultes said. “We knew they were a great team, but we weren’t intimidated. We kept battling back, but give them credit. Don Bosco made the plays when they needed to.”

The Dons have now won the 8-player title four of the last seven seasons. Don Bosco reached the championship game six of the last eight years

“This state title means a lot for our school and for our community,” Yoder said. “A lot goes on behind in the scenes in terms of all the extra work that goes into this in the weight room and everything. There were so many people who made this possible. This a great group of young men who really care about each other. It was a fun group to coach.”

Aububon was making its second state finals appearance. The Wheelers were the Class 3A runner-up in 1977.

“Our program has come a long way in the last six or seven years,” Wheelers coach Sean Birks said. “Our guys came in here determined and focused. They gave a great effort – we just came up a little short against a very good Don Bosco team.”

Don Bosco will play for its fourth 8-player football championship in eight years Thursday morning in the UNI-Dome.

As far as the Don Bosco football program is concerned, the Dons are back where they belong.

Prep football playoffs: Even, Don Bosco get back to the Dome

Thomas Even had a big night as Don Bosco throttled Easton Valley Friday to earn a spot in the 8-player state football semifinals.

Grundy Center gave No. 1 West Hancock its toughest battle of the season, but the Spartans fell short in Thursday's Class A state football title game.

Don Bosco's Cael Frost passes to Lewis Havel during the 8-player state championship game against Audubon in the UNI-Dome.