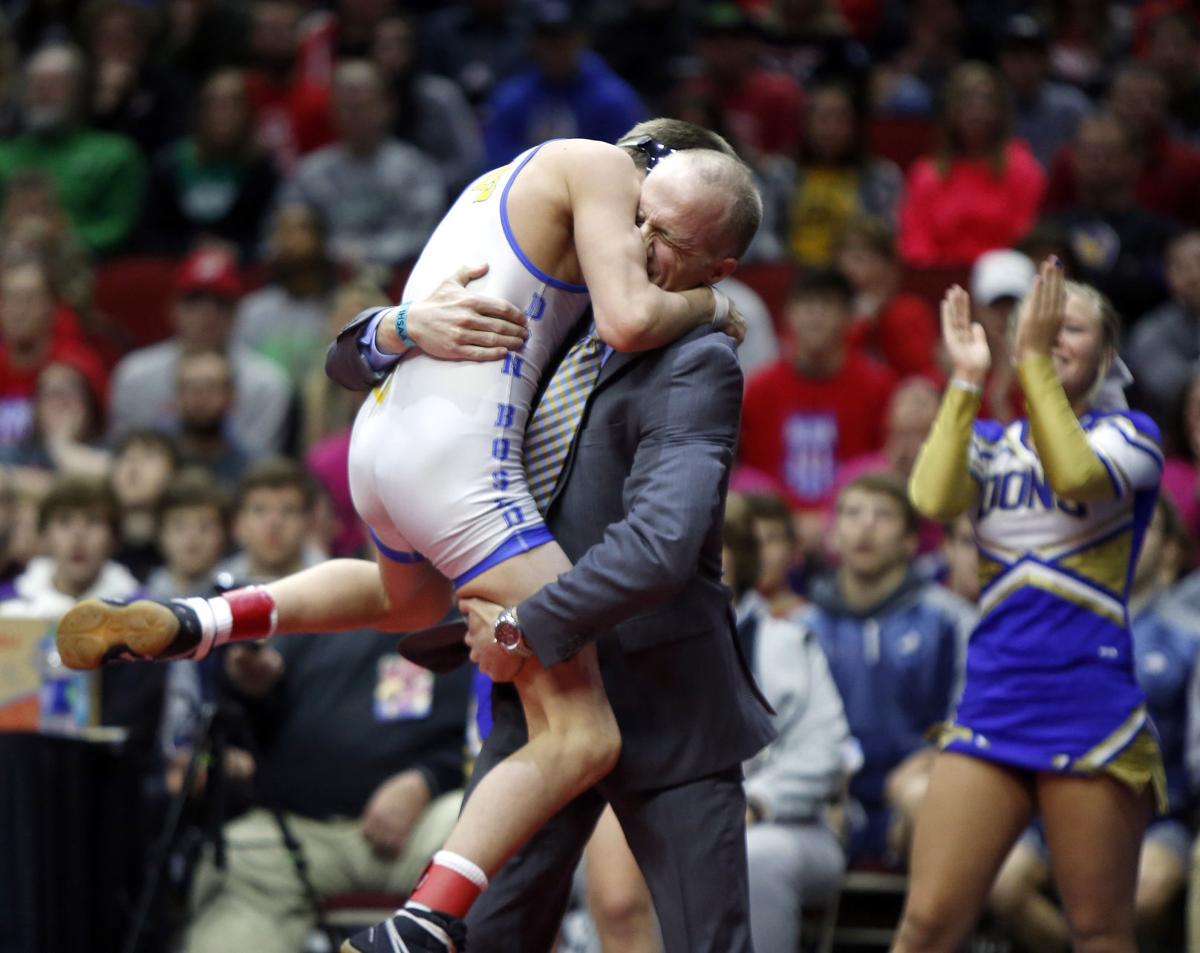 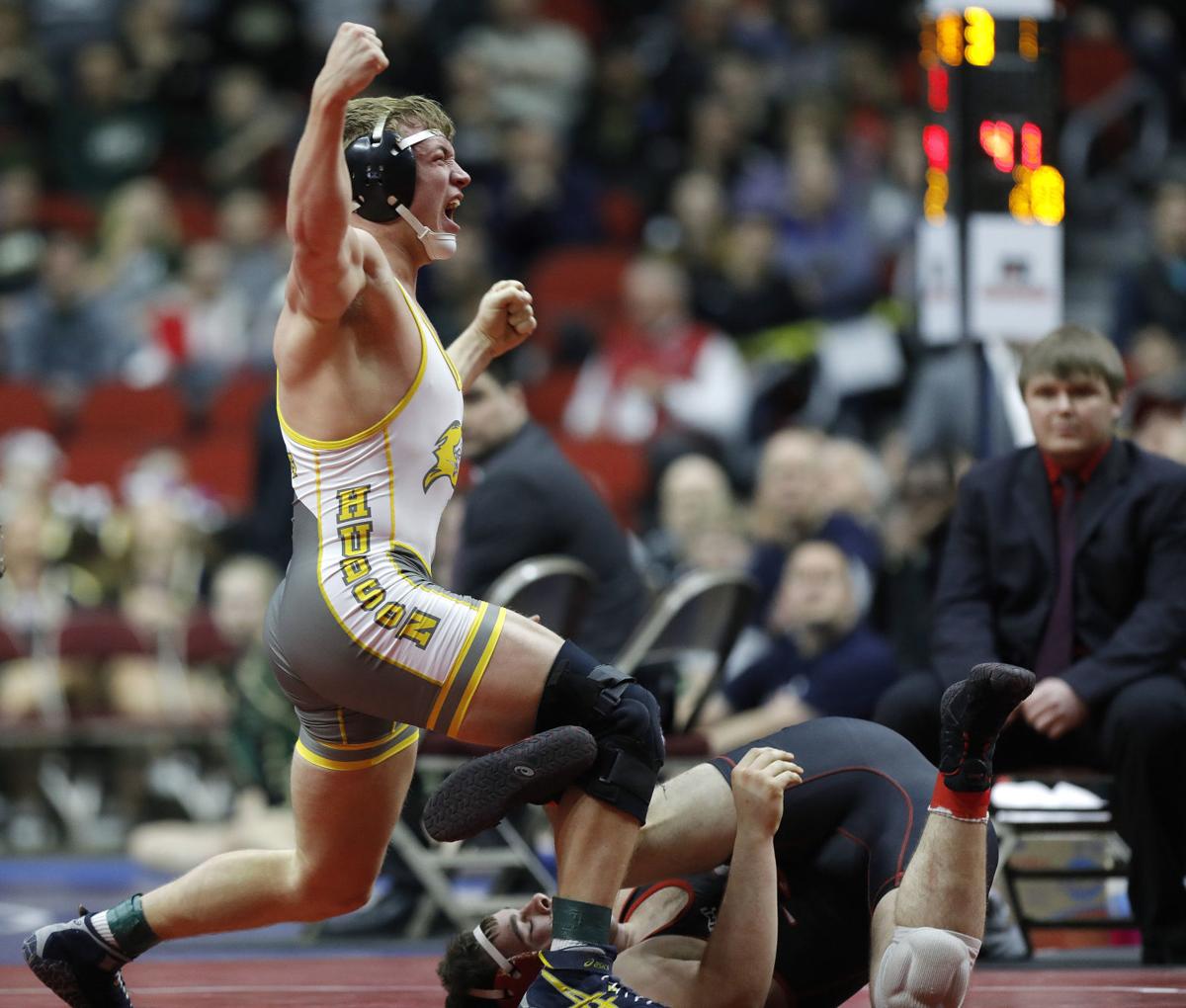 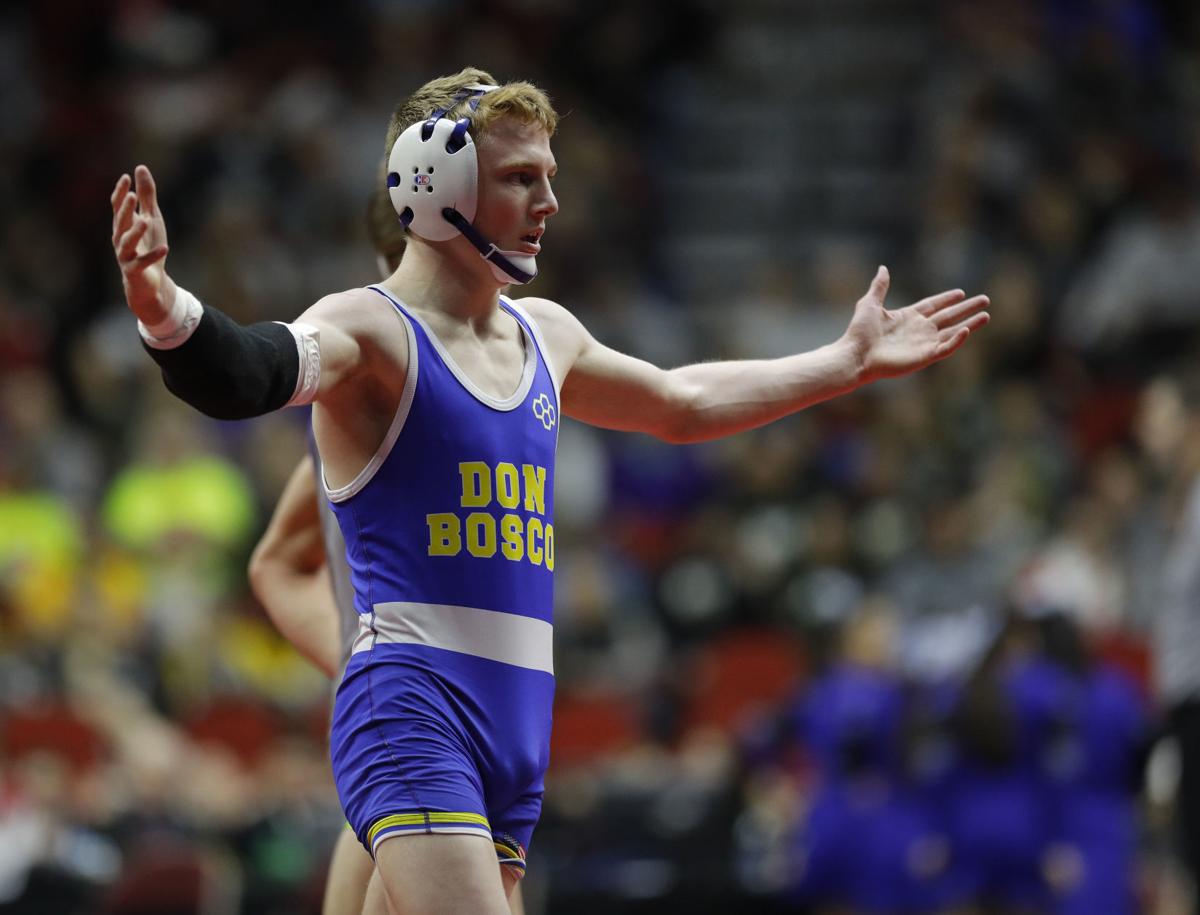 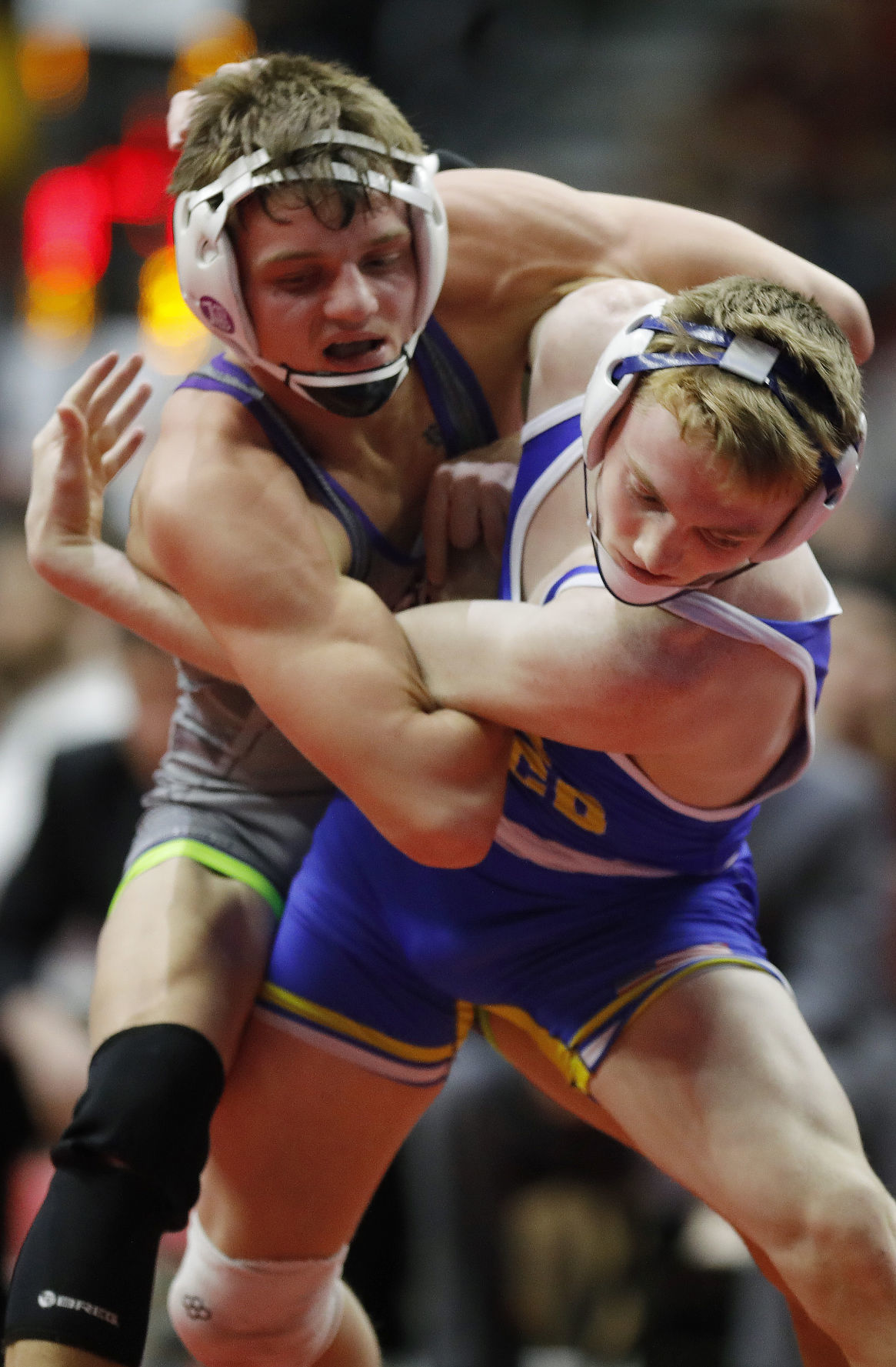 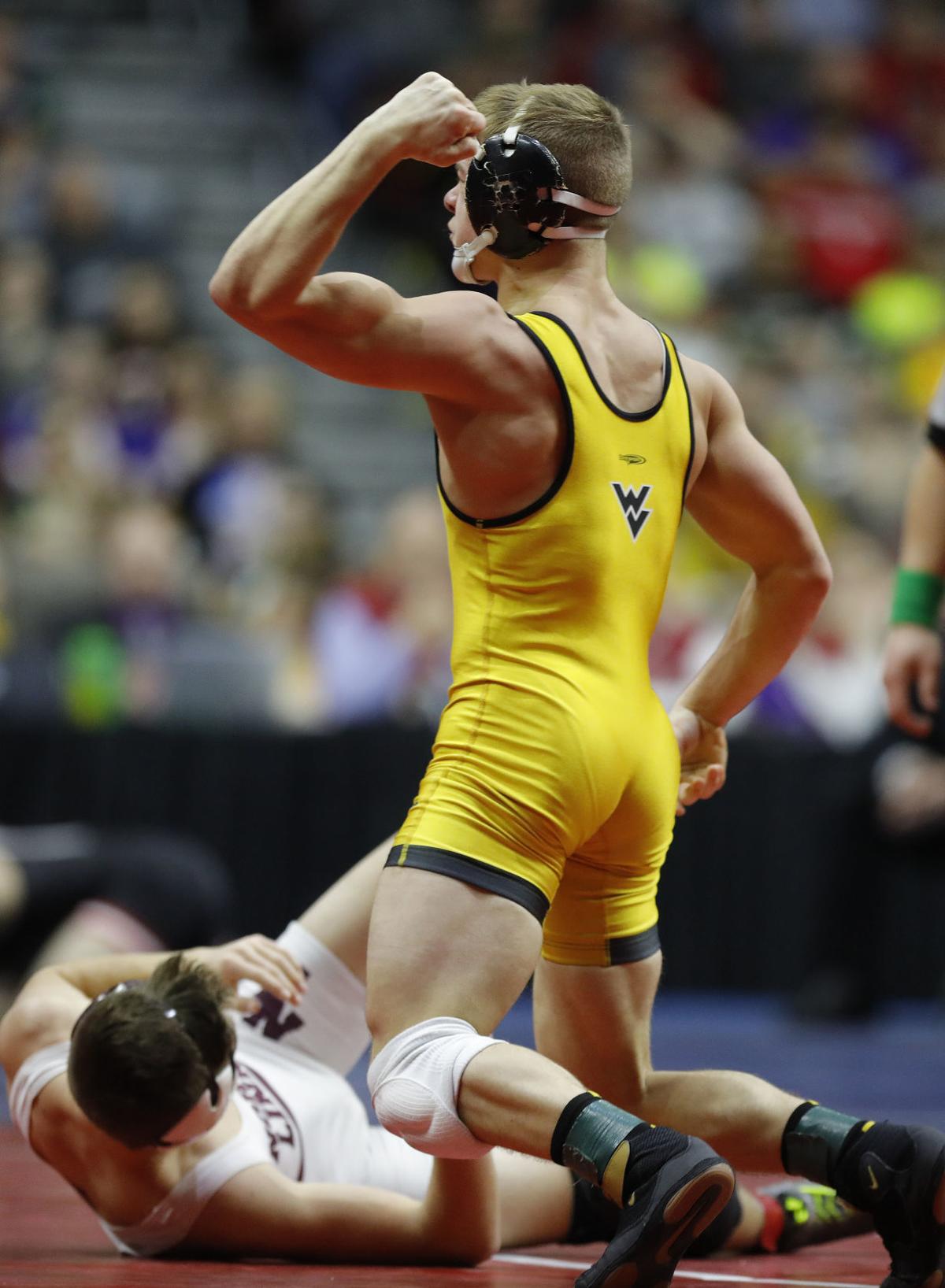 DES MOINES — It was a father-son kind of night for Don Bosco of Gilbertville.

The Dons’ first state champion in 1977 was a Fox. Its latest is also a Fox.

Gable Fox followed in his father Ray’s footsteps with his 11-10 victory over Kolton Roth of Graettinger-Terrill in the 138-pound Class 1A finals at the state wrestling championships Saturday at Wells Fargo Arena.

“It means a lot,” Fox said. “To be able to come down here and match my dad, it feels good knowing we are going to have the first name and last name on the wall.”

Fox, who finishes as a four-time medalist and was third each of the past two seasons, gave up the initial takedown, but did not trail again as he built his lead to 9-3 before giving up a couple of late scores to make the final score tighter.

“Gable has worked harder than anybody in the room the last couple of years,” Don Bosco head coach Tom Hogan said.

The Foxes are the second father-son combo in school history who have won state championships, joining Irv and Jake Thome.

Ray, one of Don Bosco’s assistants, got to present Gable’s championship medal to him on the podium.

“I don’t know where he watched it from, I heard him a couple of times,” Fox said.

The evening kicked off with another Don Bosco father-son moment.

Daniel Kimball not only won his 100th career match Saturday, but he won a state championship with a 6-2 win over

Jaymus Wilson of Alburnett. Upon winning, Kimball leaped into the arms of his dad, Eric, who was coaching in his corner.

“Feels great, a lot better feeling than losing in the semis last year,” said Kimball. “Finally feels great to come here and get that done.”

Kimball scored just 16 seconds into the match only to see Wilson reverse him with 1:07 left in the period and ride him out. Then Wilson was putting on another tough ride when, with 41 ticks left in the second, Wilson got out of position and Kimball reversed him for a 4-2 lead.

Kimball tacked on a two-point near fall early in the third.

“It means a lot. First Don Bosco state champion in six years. I didn’t know that was my 100th win, but sweet.”

“Daniel is a grinder and a tough kid,” Hogan said. “I always tell him you deserve to win it, but you’ve got to earn it and he earned it.”

The Dons fell short of sweeping a pair of state titles this week. After capturing the State Duals Wednesday, Don Bosco finished second to Lisbon, who repeated as 1A champs with 127.5 points, 6 1/2 better than the Dons.

Don Bosco had four other placewinners — Cael Frost was fifth at 120, Easton Larson was fourth at 126, Austin Hellman recorded two pins Saturday en route to a third at 160, and Thomas Even was fifth at 170.

“But we haven’t had two state champions in a long time. We got one and then we got two so that makes it a special night.”

WAPSIE TWO-TIMER: Donny Schmit said it was just another night. But most normal high schoolers don’t win a state championship on a normal night.

Pinning North Linn’s Brady Henderson in 1:58, Schmit captured his second state title in three trips to the finals, this one at 132, two seasons after winning at 106 and a season after finishing second at 126.

“It is another day on the job and you’ve just got to go do what you normally do and finish it,” Schmit said.

Schmit is just the second Warrior wrestler to win two titles, joining Rollie Kane, who won back-to-back in 1981 and 1982.

“It is great. I’m always glad to represent the black and gold, lost for words. It is great representing our school,” Schmit said.

Schmit’s teammate, junior Kaleb Krull was looking to win his second title in as many years Saturday, but dropped a 6-2 decision to Wilton’s Trey Brisker in the 152 finals.

SIGNATURE MOVES: Hudson senior Cam Fulcher missed a chunk of the 2017-18 wrestling season, but the time he did get to spend on the mat he took full advantage of.

Trailing for most of 220-pound championship match against Tom Rief of Missouri Valley, Fulcher, down 10-8, hit a lateral drop and pinned the top-ranked Rief in 5:44 for a thrilling championship win.

“At the end, my signature move, lat drop,” Fulcher said. “An honor. Amazing. I didn’t think this was going to happen.”

Sadler (44-0) kept his perfect season and perfect mark against Arends intact by pinning the Wolverine senior in 52 seconds to become Jesup’s first state champion since Austin Even in 2011.

“Feels really good. I’m excited. Probably my last wrestling match ever so just wanted to go out and get it done,” said Sadler, who is walking on to the Iowa football team.

THE GREAT EIGHT: Denver set a school record with eight state medalists, and the Cyclones grabbed their second team trophy of the week.

After finishing second to Don Bosco in the State Duals on Wednesday, Denver finished with 86 points, which was good enough for third place in 1A.

After a disappointing quarterfinal round, the Cyclones rebounded by going 8-for-8 in Thursday’s blood round where victories guarantee podium finishes.

“Our goal coming down here was two trophies and nine medals, and we fell just a little shy of that,” head coach Chris Krueger said. “An all-out great team effort. We were really gritty and battled all weekend.”

Why are the Cowboys favored to win the divison?

Who's more likely to make the CFB Playoffs: Clemson or Ohio State?

Who's more likely to make the CFB Playoffs: Clemson or Ohio State?

Tigers score with seven seconds left to pull out 24-21 win over the Hawks to improve to 2-1.

Tyree Gardner rushed for three touchdowns and passed for another as West (2-1)  rebounded from a 52-14 loss to Cedar Falls last week.

Preps to Watch & Preps of the Week

Consider it the best of both worlds for Fort Dodge football coach Nik Moser.

The Wildcats scored the first 20 points of the fourth quarter to turn a tight 14-8 game into a 34-14 win over the Panthers at home.

No. 1 Dike-New Hartford cruises past No. 2 Denver