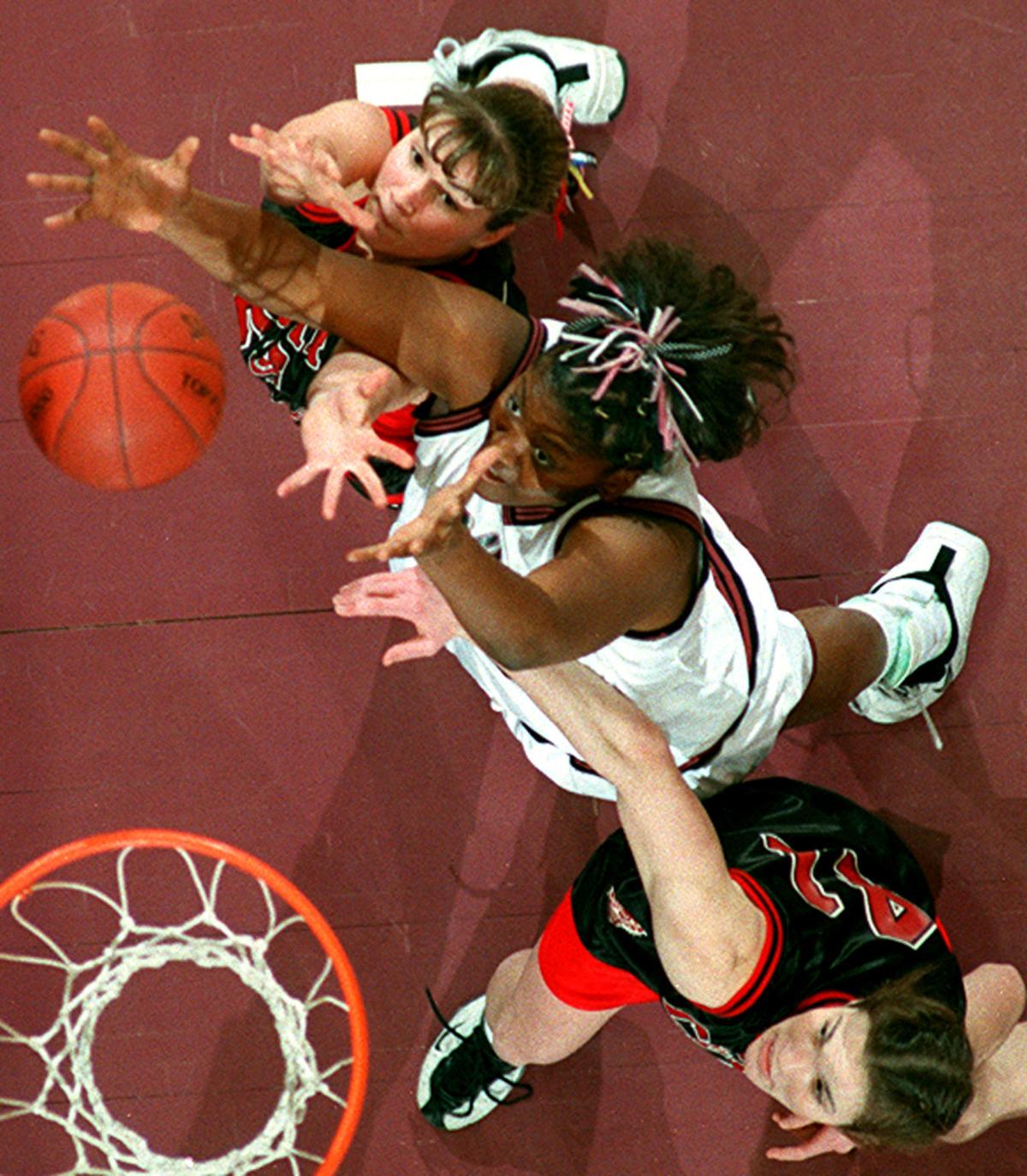 In this March, 1999 Courier Photo, Waterloo West's Nina Smith battles Cedar Falls' Ellie Peterson (41) and Kim Hansen in a Class 4A state semifinal game. Twenty-one years after that game, the sixth-ranked Wahawks and fifth-ranked Tigers will play in a Class 5A first-round game Monday in Des Moines. 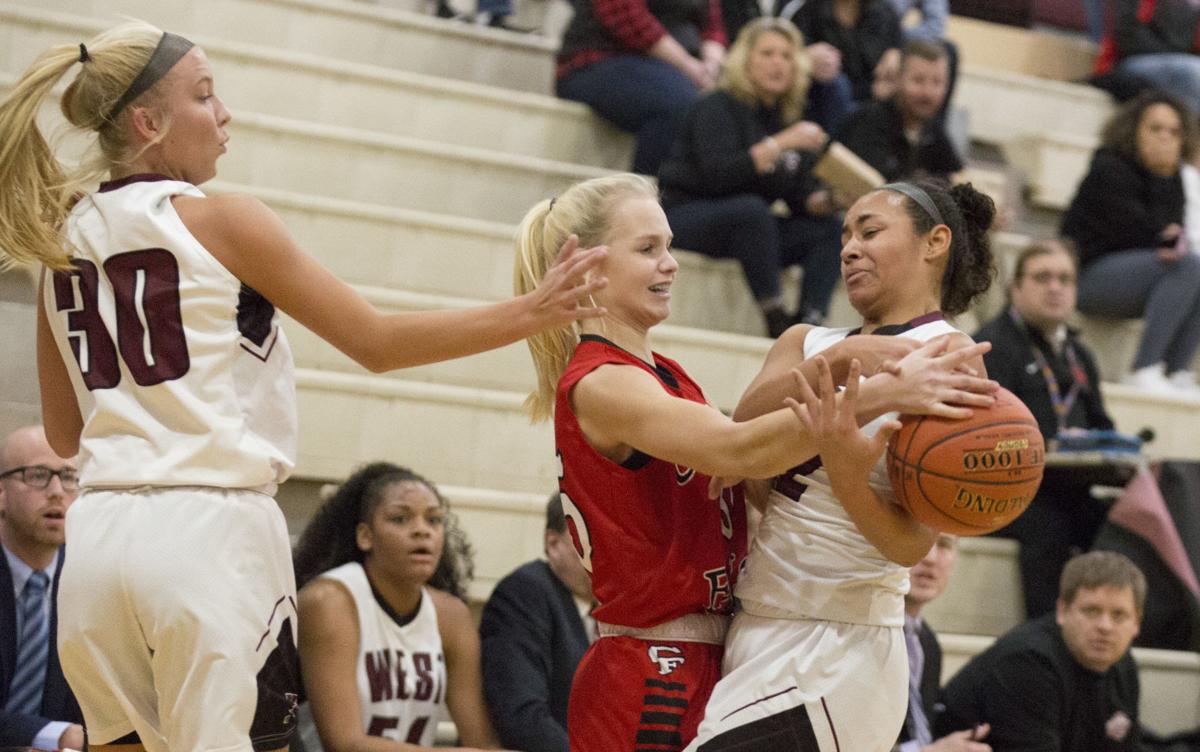 Waterloo West's Gabrielle Moore tries to steal the ball from Cedar Falls' Morgan Linck during a December game at West. 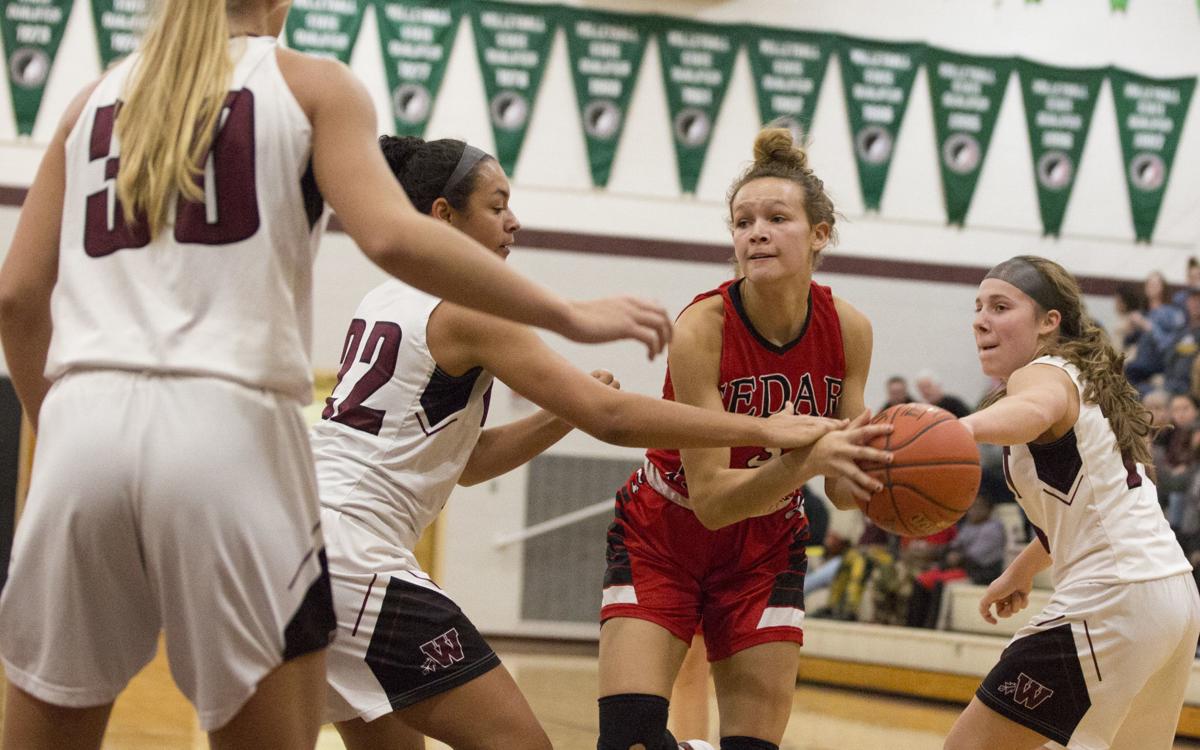 One of the biggest basketball games in metro girls’ basketball history occurred in the Class 4A state semifinals in 1999.

Flash forward to 2020 and with Smith’s daughter, Brooklynn starting for the sixth-ranked Wahawks, West will face the fifth-ranked Tigers in a Class 5A first-round girls’ state tournament game at 3:15 p.m. Monday at Wells Fargo Arena, across the street from Veterans Memorial.

This matchup is also generating a lot of buzz.

“I think it is pretty exciting that we have two Cedar Valley schools, two metro schools playing against each other at the state tournament,” said Cedar Falls head coach Gregg Groen. “I think big picture it is great for the Cedar Valley.”

This meeting has a lot of similarities to the 1999 meeting.

Like then, Cedar Falls and West split regular-season games. The Wahawks beat an Emerson Green-less Tiger team, 60-43, at home on Dec. 13. With Green back in the lineup, Cedar Falls turned the tables on West in a 67-58 win in Cedar Falls on Jan. 31.

And there is one other striking similarity with the game, but in reverse order. In that 1999 season, Cedar Falls started a freshman, Ellie Peterson, two sophomores in Kerry Juhlin and Kim Hansen, and Swisher, a junior, whereas West started three seniors Smith, future San Diego State star Jamey Cox and Stephanie Staack.

“This is the youngest team we ever have had qualify for the state tournament,” Pappas said. “We are playing freshmen and sophomores and have another freshman that would be playing that is injured. For what they have accomplished as such a young team it is kind of amazing.”

Groen admits there are some advantages to the Tigers’ experience, including the fact Green and Anaya Barney started on Cedar Falls’ 2018 tournament team.

“In terms of being down there before that experience does have its advantages,” Groen said. “At the same time, that newness and being there for the first time can have its own motivational factors, too. Really, what we’ve talked to the girls about is competing and doing what you have been doing all year and trying to put it altogether.”

“I knew playing with them this summer that they would step up and play hard,” Conrey said. “Halli and Sahara don’t care if I’m a senior. They want to play me one-on-one in practice. They want to beat me. They’re competitive.

“They’ve stepped up all season. They definitely don’t play like freshmen.”

Poock, who hit two free throws with one second left to lift West past Urbandale, 46-45, in the regional finals, leads West with a 18.8 scoring average. Williams, Conrey, Moore and Smith all average between nine and 10 points.

Conrey is the straw that stirs West’s offense.

Entering the state tournament, Conrey has 377 career assists. Her 111 this season makes three straight seasons over 100 for the Grand View University commit. She needs three more to tie Lindsey Aves, who played at Georgia Tech, for third all-time on West’s assist chart. Cox is the all-time leader with 429, and Shannan Smith, who led the Wahawks to the 1994 semifinals before departing for Yale is second with 398.

“The youth of this team is really what makes us different,” Pappas said. “Hopefully they will continue to grow and get better. At the same time, this group is not going to settle for just making it down to state. They have the mentality of wanting to win a state championship.”

Despite a lack of height, Green and Barney are the Tigers’ two tallest players at 5-foot-11, Cedar Falls has not backed down and has only gotten stronger down the stretch. Since losing to then top-ranked Iowa City High in overtime on Jan. 21, the Tigers have won 11 straight.

Barney and Green, both committed to Northern Iowa, each are averaging better than 17 points and 7 rebounds a game, and Jasmine Barney had 16 points in the Cedar Falls win over West in January, a game where the Tigers nailed 14 3-pointers, including five from reserves Anna Sandvold and Morgan Linck.

West, making its first appearance at state since 2014, is equally excited.

“It’s going to be a great atmosphere with a lot of fans from both sides,” Moore said. “We know each other well. We are close in many ways. But once we get on the court it will be about the game.”

Waterloo West rallied from a big deficit in the baker rotation to capture the Wahawks first state bowling championship Wednesday at Cadillac XBC.

Waterloo East senior was individual champion and the Trojans captured their second Class 2A state title in program history Tuesday at Cadillac XBC.

No. 1 Dike-New Hartford turns back Jesup in 3A opener

Ellie Foster scored 21 points as top-ranked Dike-New Hartford advanced to the 3A semifinals.

In this March, 1999 Courier Photo, Waterloo West's Nina Smith battles Cedar Falls' Ellie Peterson (41) and Kim Hansen in a Class 4A state semifinal game. Twenty-one years after that game, the sixth-ranked Wahawks and fifth-ranked Tigers will play in a Class 5A first-round game Monday in Des Moines.

Waterloo West's Gabrielle Moore tries to steal the ball from Cedar Falls' Morgan Linck during a December game at West.