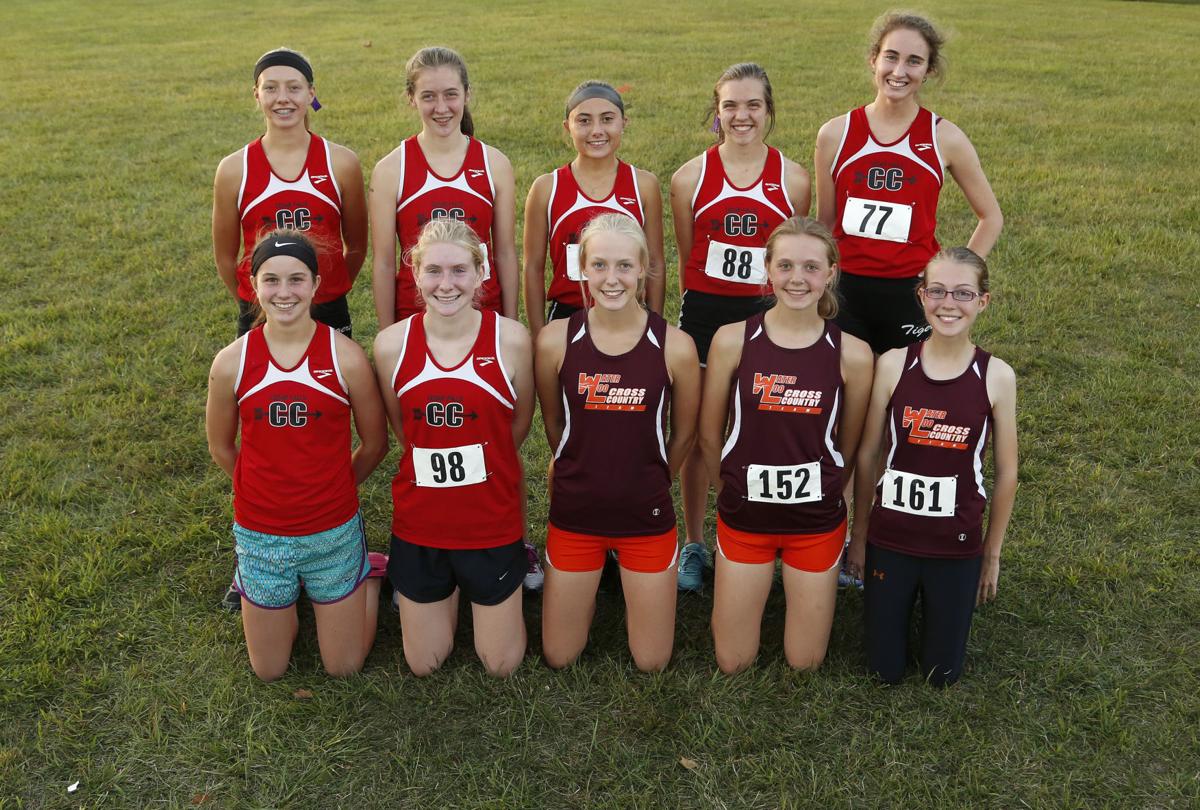 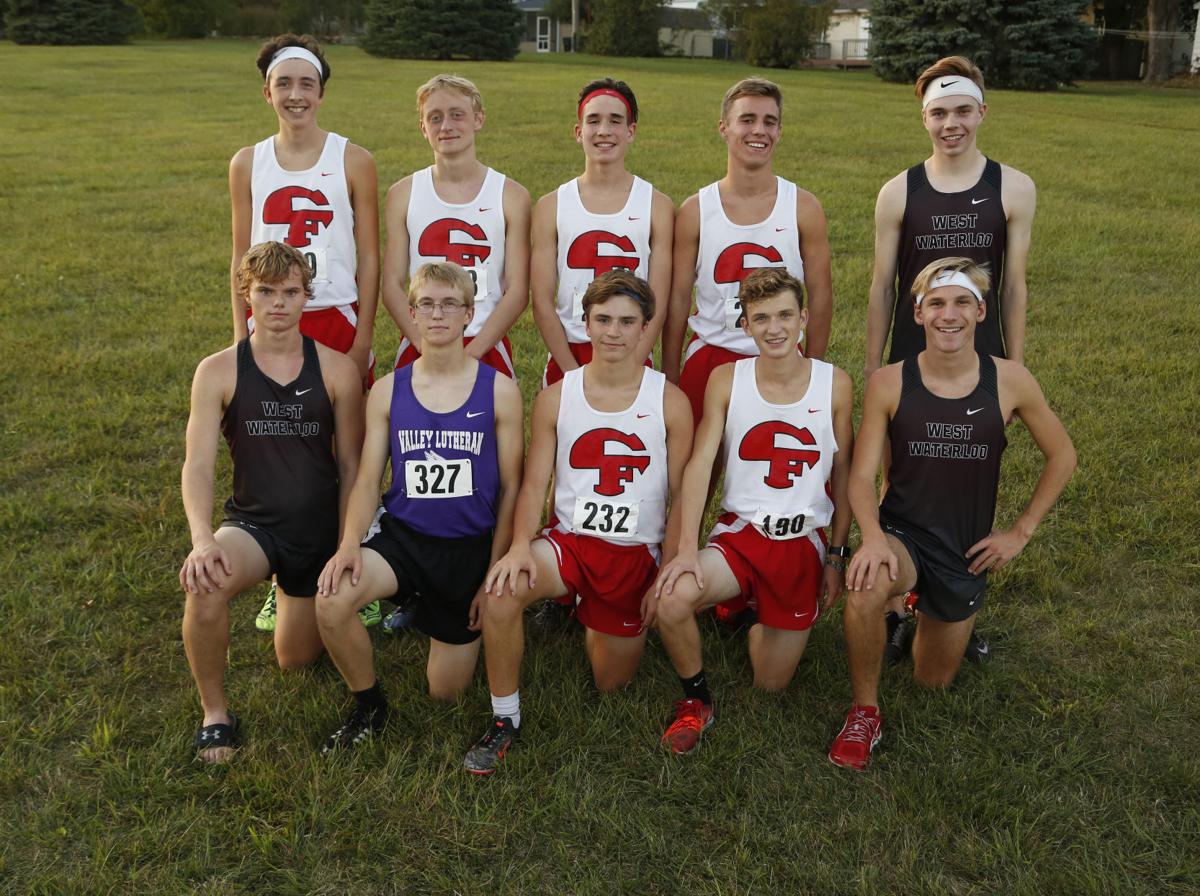 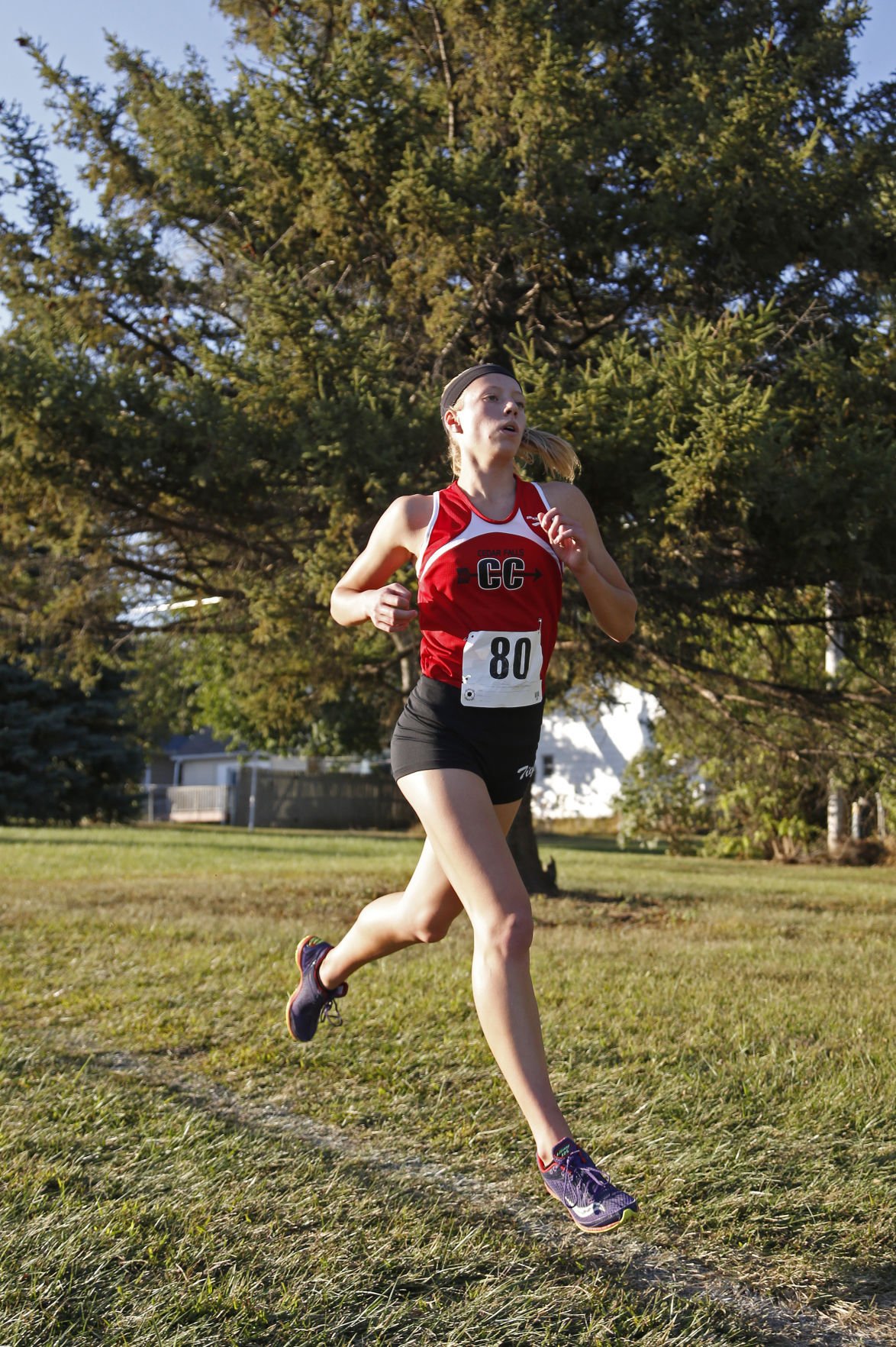 Cedar Falls’ Mackenzie Michael will look to give the Tigers a boost in Saturday's Class 4A state championship. 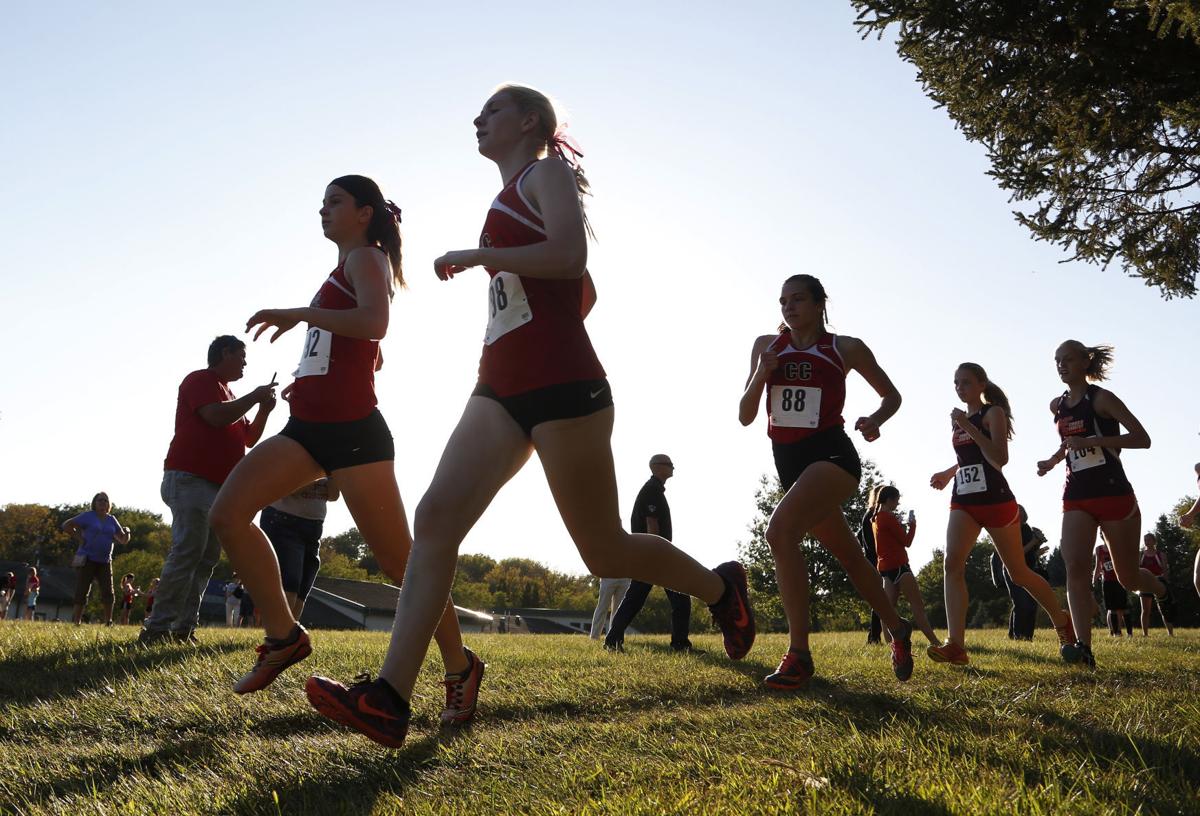 Girls round a corner in the girls all metro cross country meet at Bontrager Park Thursday. 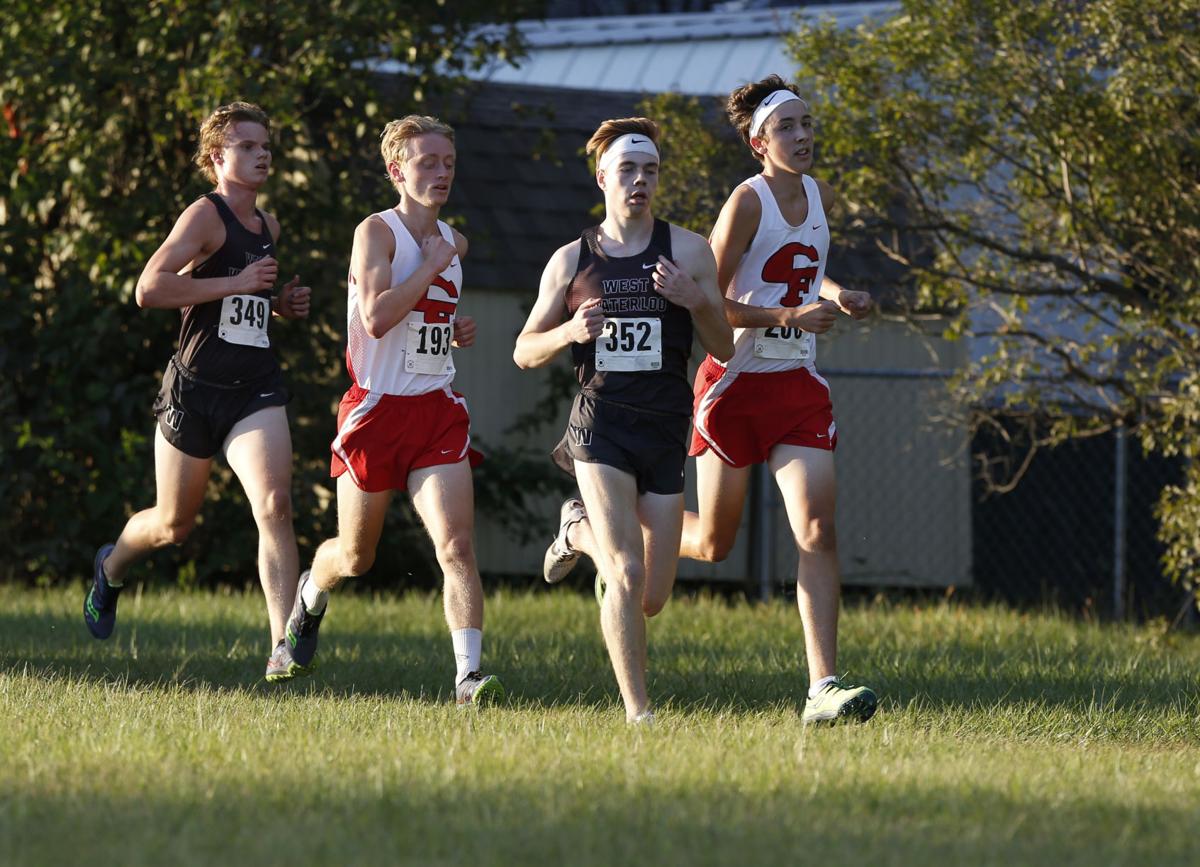 WATERLOO — As Cedar Falls continued its dominance of the annual metro cross country meet, a race within the race served as a source of motivation for the Tigers Thursday at Bontrager Park.

Class 4A’s No. 5 Cedar Falls girls continued to push each other for positioning within their team, while sweeping Waterloo’s combined program, 15 to 50. A youthful Cedar Falls boys’ team that has featured 12 different varsity runners saw six of its seven runners earn all-metro honors with top 10 finishes during a win over Waterloo West, 17 to 43. Columbus was third with 85 points.

Michael has taken over the top spot on the Tigers’ team following the graduation of two senior leaders from a squad that placed fourth in last year’s state meet. Running by herself throughout the course, she was hoping to contend with her personal record of 18:47, and says she’ll continue pushing herself towards that lofty standard.

“Every athlete fails sometimes, but I don’t really think I failed,” Michael added. “Because you only fail when you give up, and I’m not going to give up.”

Following a successful freshman season of running cross country and track, where she qualified for state in multiple events and won the 800-meter championship, Michael enjoys the bond this team has formed.

“We encourage each other all the time and we have a really great team,” Michael said. “Just being able to run with my team and compete with some of the best athletes in the state is fun. It gets me pumped up. It’s just a sport I really love and enjoy.”

Cedar Falls coach Don Williams liked what he saw from the girls as the Tigers get set for next week’s MVC Super Meet that will include six of the state’s top nine teams in Class 4A. Seniors Anna Hertz, Kvale, Caroline Ross, Madison Larsen and Meg Schmitz finished second through sixth, respectively, while junior Jessica Van Dorn was seventh.

“They’re every bit as good as we were last year and they’re still improving,” Williams said. “It’s been fun to watch them grow.

“One of the hard things to do sometimes is to encourage girls to switch places (within the team). Sometimes you kind of get into the, ‘I’m the number 3 runner, I’m the number 5 runner.’ One of the thing we’re really getting good at is, ‘I don’t have to accept this position, this time. I can do better.’ They’re not afraid to change places in races, which I think is a really good thing for us.”

In the boys’ race, Cedar Falls junior Brandon Conrad took home his first varsity title after finishing runner-up by a half second in Dubuque last week. The Tigers’ Caleb Burjes, Hollis Wilson and Jens Jorgensen rounded out the top four.

“It motivated me a lot,” Conrad said, reflecting back on last week’s near victory. “I really wanted that win and I was close. Coming out today, I just wanted to go out and get the lead and get the win.”

Cedar Falls coach Troy Becker had his team work on more controlled starts and finishing strong on this night, and was pleased with how they executed that strategy. By season’s end, the Tigers hope to extend a streak of 25 consecutive team trips to state to 26.

“We have one goal and that’s to quality for state,” Becker said. “We know we’re not a top-five team, but at the same time I think on a great day we can definitely make it back to state.”

“I thought we competed really well for a mile and a half,” West coach Joe Malsam said. “I think we’re strong enough to compete for two and three miles, but that’s not where we were at tonight. Hopefully we’ll be there in a couple weeks for our conference and districts.”

Valley Lutheran’s Owen Dawson held off a closing charge from Cedar Falls’ Paul Pease to finish seventh in 18:11. Bryce Buhlman was the top finisher for Waterloo East in 15th with a time of 20:04. Michael Pranger led Waterloo Columbus’ third place team with a 17th place time of 20:26.

Are the Green Bay Packers pretenders?

Tigers top Jaguars to improve to 3-1.

The Tigers at some meets have had six juniors in their lineup.

Tigers score with seven seconds left to pull out 24-21 win over the Hawks to improve to 2-1.

Alivia Bronner is described as a player who brings the right mindset to the court whether that be for a daily practice or a competition.

Cedar Falls’ Mackenzie Michael will look to give the Tigers a boost in Saturday's Class 4A state championship.

Girls round a corner in the girls all metro cross country meet at Bontrager Park Thursday.