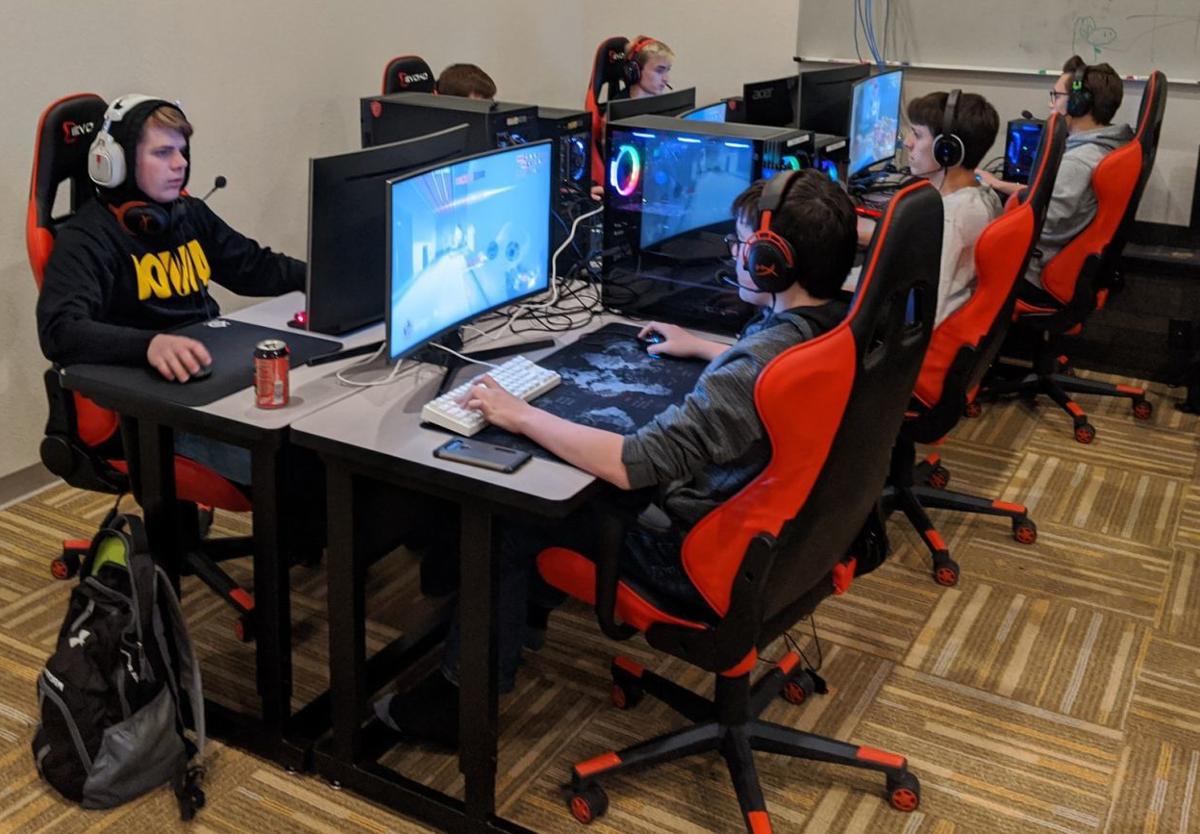 Members of the CF Ambush esports team compete in their arena at iTech in Cedar Falls against Lyons Esports in the championship of a recent national competition. 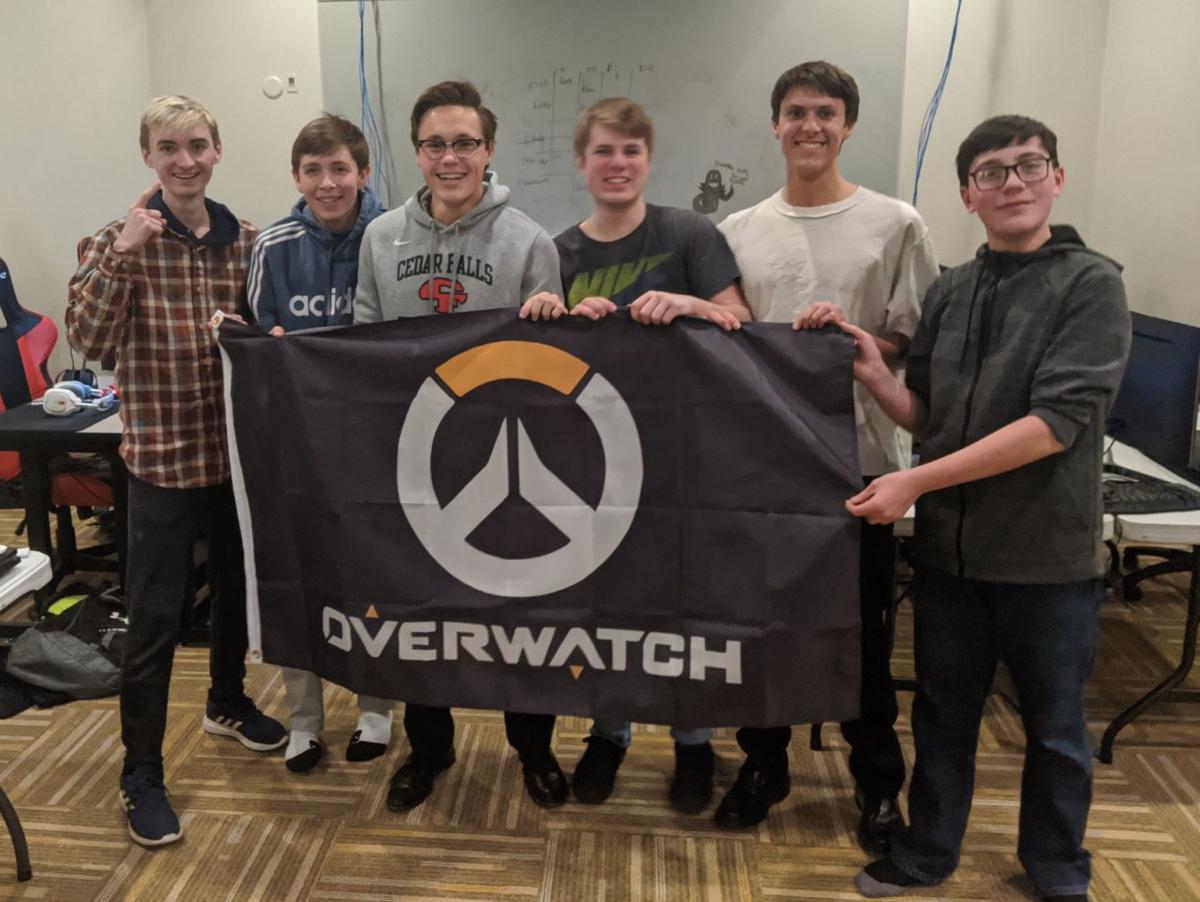 CEDAR FALLS — It could easily be a plot to an action movie.

A group of six friends get together. They surround a board room table, take a seat on futuristic red chairs in front of computers and use headsets to collaborate on ways to outflank adversaries in pursuit of a cash prize.

“It takes a lot of small things to pull together to make one big thing happen,” Cedar Falls captain Alex Shepard said. “Then you get a nice reward when a big thing happens.”

Cedar Falls Director of Instructional Technology Brian Unruh says information on gaming and esports was provided at a recent state educational technology conference in Des Moines. Educators were given tools to start clubs at workshops, and conversations began.

“The more we looked into it, the more we liked the idea and being able to really provide an opportunity for kids that might not have been involved in other extracurricular activities in school,” Unruh said. “About half of our kids that go out aren’t involved in any other sport or extracurricular. We felt like that was kind of a neat opportunity for them to get involved and connect with other kids.”

Cedar Falls utilizes a computer room with four stations inside iTech as its competition and practice arena. The esports club started in January and has grown to 60 participants with options to compete in Rocket League, Super Smash Brothers, Rainbow Six Siege, Minecraft, Fortnite and Overwatch.

Unruh serves as a co-coach alongside Shane Paige. Cedar Falls has three different Overwatch teams that have been assembled by skill level.

The Tigers’ championship team includes a group of five seniors – Shepard, Nathan Raubs, Easton Sckerl, David Wilson and Ben Meinders – who have been playing video games together for years. Freshman Keegan Hussey joined them for the first time this fall.

Cedar Falls navigated an eight-week regular-season schedule and qualified for a 16-team tournament, where the Tigers avenged their lone loss to Lyons in the final round.

“Previous seasons we had to play positions that weren’t necessarily our strongest,” Sckerl said, assessing Hussey’s addition. “We could all play our primary positions and then have Keegan come in on tank (a role that provides protection to teammates with shields). He just fit into the puzzle perfectly.”

Competing with older teammates forced Hussey to step outside his comfort zone.

“I’ve learned that even if you don’t know people initially, you can still work together and work well,” Hussey said. “I wasn’t really open to that before doing this.”

The freshman then deadpanned, “But then I met these guys and I absolutely carried them.”

It’s that camaraderie that has made this title run satisfying for members of CF Ambush. Shepard noted his team was able to defeat more skilled opponents through its communication skills.

“I like the team aspect,” Shepard said. “You can win by just being good by yourself, but it’s just so much more satisfying when all six people are working together. Everyone does what they’re supposed to and it just works.”

That collaborative component is often overlooked when gamers get stereotyped as introverts. At least two members of this CF Ambush team can be found competing with each other on a nightly basis.

“Esports is becoming more mainstream, but I still walk around school and I’m like, ‘Oh, I’m that kid,’” said Sckerl, who also competes in track and cross country and is active in the band. “There’s still that stigma that gamers are just weirdos that sit in their rooms in the dark, but everybody does it.

“When you go to school everybody is talking about Fortnite. Whether it’s your jocks or not so popular people, it’s something everybody can bond over.”

Following match wins, CF Ambush has started a routine of making trips to Raising Cane’s for a “victory lap”.

“Winning,” Wilson responded, when asked what he enjoys most about the club. “It’s really fun. We love playing the game and competing.”

Esports: A new game in town

Esports: A new game in town

The Waterloo Courier's three-part series on the new phenomenon of esports programs at Iowa colleges and universities.

Part I: New game in town: Upper Iowa, Hawkeye plugged in to esports

First in a three-part series on the new phenomenon of esports programs at Iowa colleges and universities.

eSports: Everybody's a gamer at some level

Second in a three-part series on the new phenomenon of eSports programs at Iowa colleges and universities.

Last in a three-part series on the new phenomenon of esports.

Northern Iowa has been extremely efficient while opening the season 11-1. The Panthers will enter MVC play as the league favorite.

Waterloo West was too much for Waterloo Columbus on the hardwood Saturday night.

One of the nation's most accurate 3-point shooters, Trae Berhow and UNI have been a perfect match.

Former NBA commissioner David Stern died Wednesday afternoon, the league announced. He was 77 and had been in serious condition following surgery for a brain hemorrhage on Dec. 12.

Members of the CF Ambush esports team compete in their arena at iTech in Cedar Falls against Lyons Esports in the championship of a recent national competition.