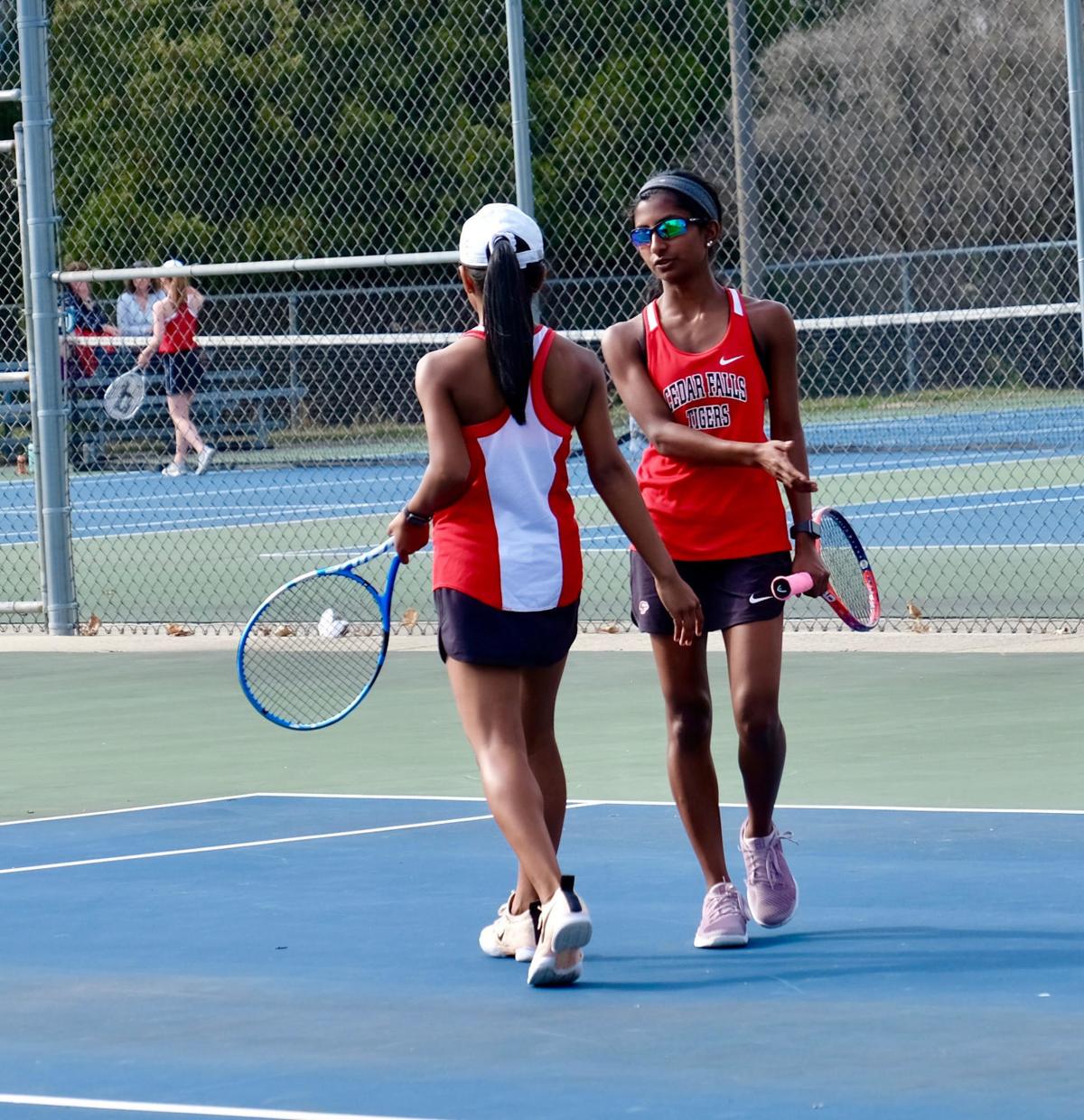 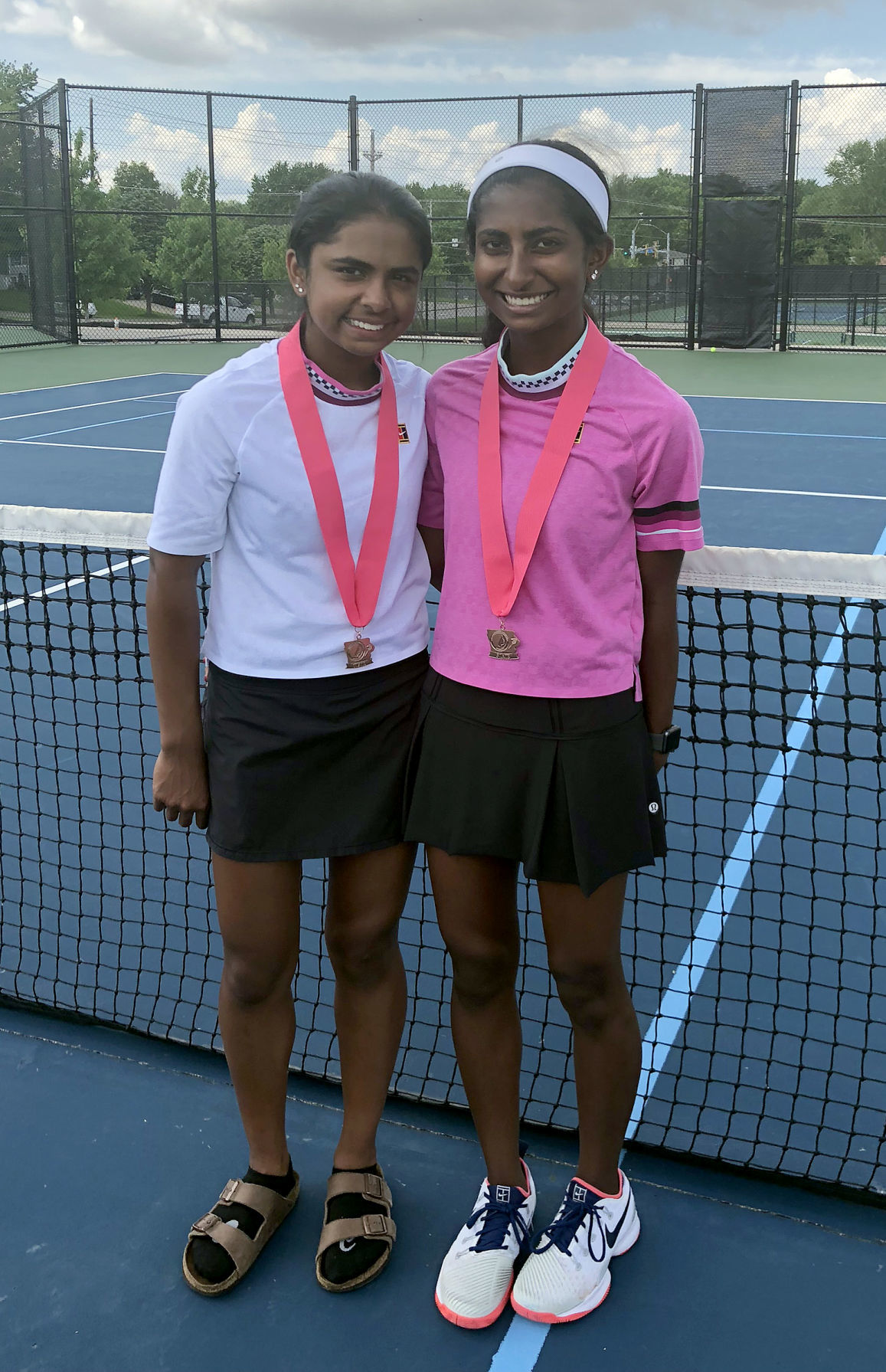 CEDAR FALLS — One of the state’s top tennis players hasn’t stepped onto a court since early March.

Cedar Falls senior Krisha Keeran has tried to found creative workouts around the house, while her dad works at Waterloo’s Allen Hospital helping to battle the coronavirus pandemic that robbed her of a tennis season.

Keeran entered this spring a contender for Class 2A’s individual and team championships. She teamed up with her younger sister, Mira, and finished third in last year’s state doubles tournament after qualifying for two state singles tournaments and placing as high as seventh in 2018.

Krisha and Mira Keeran were the top two players on a Tigers’ team coming off the program’s first state semifinal appearance. Five of the six players that pushed eventual champion Ames during a competitive 5-3 setback returned. A pair of promising freshmen additions had secured the No. 3 and 4 spots in the singles lineup and Cedar Falls’ top nine was filled with year-round tennis players.

Looking forward to the upcoming season, Krisha Keeran took a family vacation one week prior to spring break. She was unaware how quickly everything would change.

“My last day of high school I didn’t realize, ‘Oh wow, I’m not going to be coming back here any time soon,’” Keeran recalls. “That’s been hard. I’ve been FaceTiming with my friends to stay connected and we’re just trying to be positive about the situation.”

It’s a situation that hits close to home for the Keeran family.

Krisha’s mom, Santhi Keeran, is a family physician while her dad, Keeran Ghandivel, is an anesthesiologist involved with the intubation process that allows coronavirus patients to be placed on ventilators when necessary.

On the day when it was finally announced that the spring sports season would be canceled, Krisha Keeran admits she was still disappointed but not surprised.

“Even though I was super sad because I wanted to play doubles again with my sister for the last time before college, I was trying to put things into perspective,” Keeran said. “I’m really thankful my family is currently doing well and I was just trying to think about the people who have lost their loved ones during this time.”

The past two months have reaffirmed Keeran’s lifelong desire to follow in her parents’ footsteps and become a doctor. She has been accepted into Cleveland’s prestigious Case Western Reserve University where she’ll study medicine in addition to playing on a competitive NCAA Division III tennis team.

“It just shows, especially now, how selfless the healthcare workers are because they’re willing to go risk their lives every day to go help others,” Keeran said. “If they get coronavirus as of now there’s no treatment or cure for this. They’re willing to put others before themselves. That’s really admirable.”

Looking out for others has always been important to Keeran, who started her school’s first science club and conducted research last summer with the University of Iowa’s Secondary Student Training Program.

“That’s the kind of heart she has,” said Cedar Falls tennis coach Tara Sagers, who guided the group through the initial process of creating the tournament. “She has such a big heart for others and I just know she’s going to be an amazing doctor some day.”

Keeran and Kalala then founded Club Kids for a Cause which last summer organized a sanctioned USTA tennis tournament in support of their friend Steven Danna of Waukee who had been diagnosed with cancer. Life Time Athletic in Des Moines donated its courts for the first of an annual event that raises money for Des Moines-area charities Children’s Cancer Connection, Pinky Swear Foundation and Above and Beyond Cancer.

“That was one of my favorite experiences throughout high school because I was able to help the people that I cared about most,” Keeran said. “When we both go off to college this year, there’s people after us who want to step in and take that over. It’s going to be a lasting impact.”

“She sets a goal and she always finds a way to accomplish it, especially when she set up the Club Kids for a Cause,” Mira said. “She knew that she wanted to help others with the platform that she was given and she didn’t give up until she made it work. She worked very hard to be able to throw a great event.”

This spring was supposed to be Mira’s second season of doubles competition alongside her older sister. They played a couple tournaments together as young girls learning the sport, but hadn’t teamed up for years prior to Mira’s freshman season of high school tennis.

Technically sound, fierce competitors and small in stature, the Keeran sisters had found singles success in different age divisions at regional junior tournaments. Many believed they would be competing in the high school singles draw entering the individual postseason last spring.

The sisters, however, always wanted to play alongside one another for a state doubles championship.

“I can still remember at districts many coaches were completely shocked because they loaded up their team on the doubles side thinking both of them would go singles,” Sagers said. “We knew very early on that (doubles) is what they wanted to do and that was the intention this year, as well. They wanted to try to get back there and take the title.

“They pick up on things so well. They’re very coachable and they did work outside of practice. They put the extra time in, not only in the offseason, but during the season as well.”

Mira said playing doubles with Krisha provided additional motivation since she didn’t want to disappoint her sister. There’s also a unique level of candor and comfort that exists between two siblings competing together.

“I thought it was really cool to play with her because when you normally have a doubles partner you don’t really get mad at them,” Mira Keeran related. “When it’s my sister I could tell her, ‘Come on, you’re better than this. We’ve got this.’ … We just wanted to do our best and we just have to call each other out to play our best.”

Instead of leading a team filled with talented sophomores and freshmen in pursuit of state tennis hardware, Krisha Keeran is left wondering what might have been. She hopes her teammates live in the moment once sports hopefully resume next spring.

“We can’t take these things for granted because you don’t know what life will throw at you,” Krisha Keeran said. “You just have to really enjoy every single moment of it.”

2020 Golf Guide: Golfers can stay sharp around the house

Technology is becoming an important instrument for instructors.

An estimated 381 ash trees will be removed from Cedar Falls' public course.

Knight, a four-year letterwinner, will pursue a degree in agriculture production.