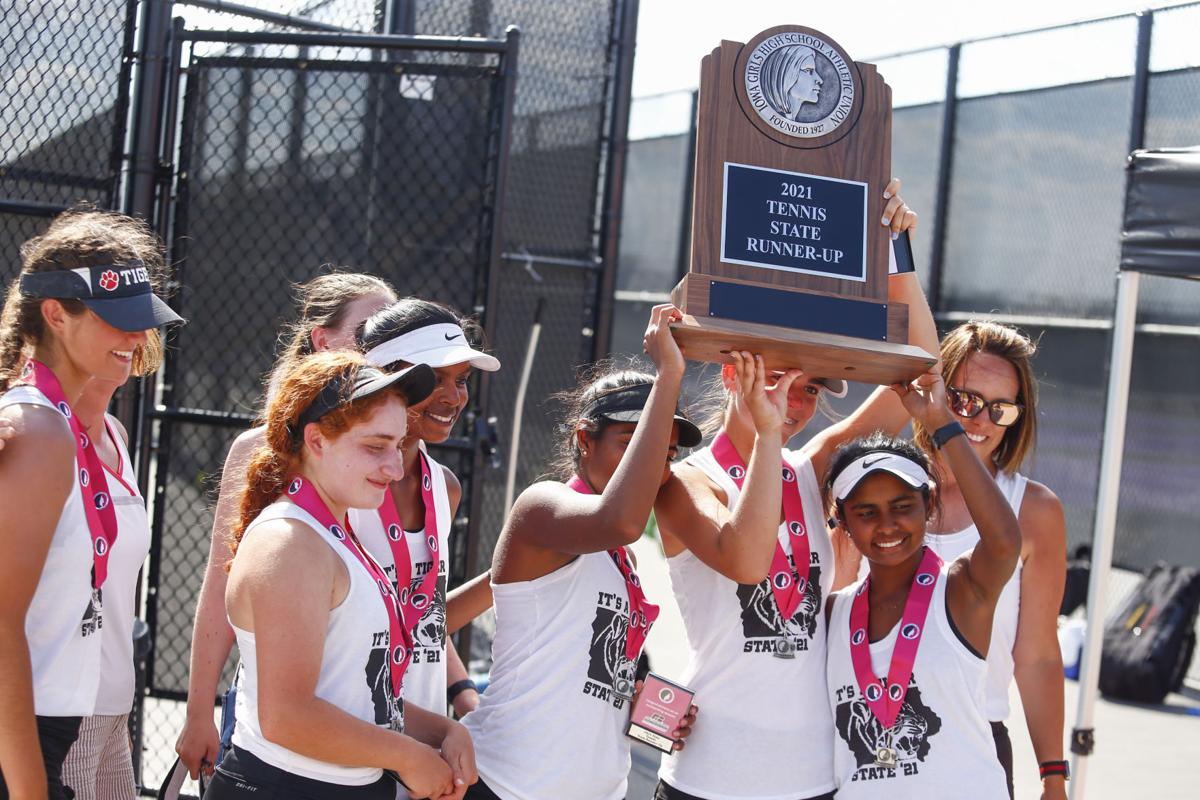 Members of the Cedar Falls tennis team hoist their runner-up trophy at the conclusion of the Class 2A state team competition Saturday in Johnston. 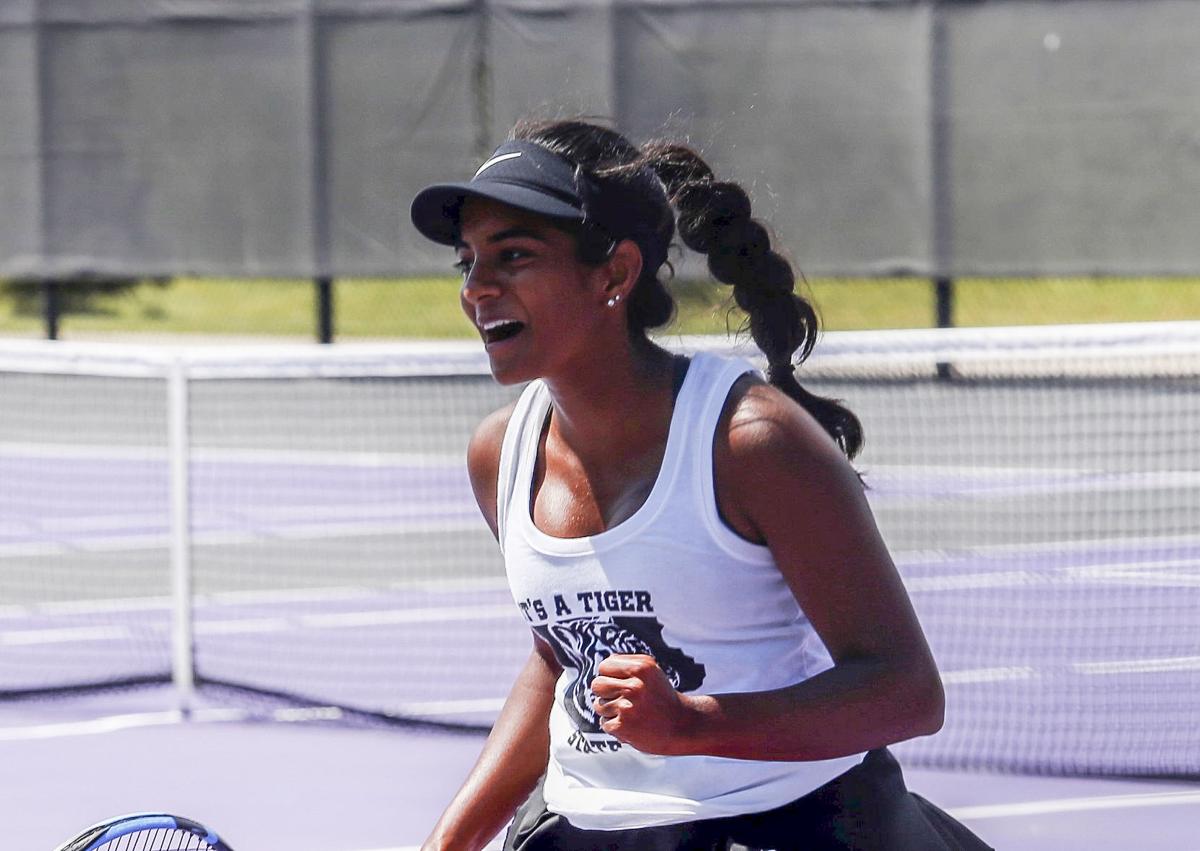 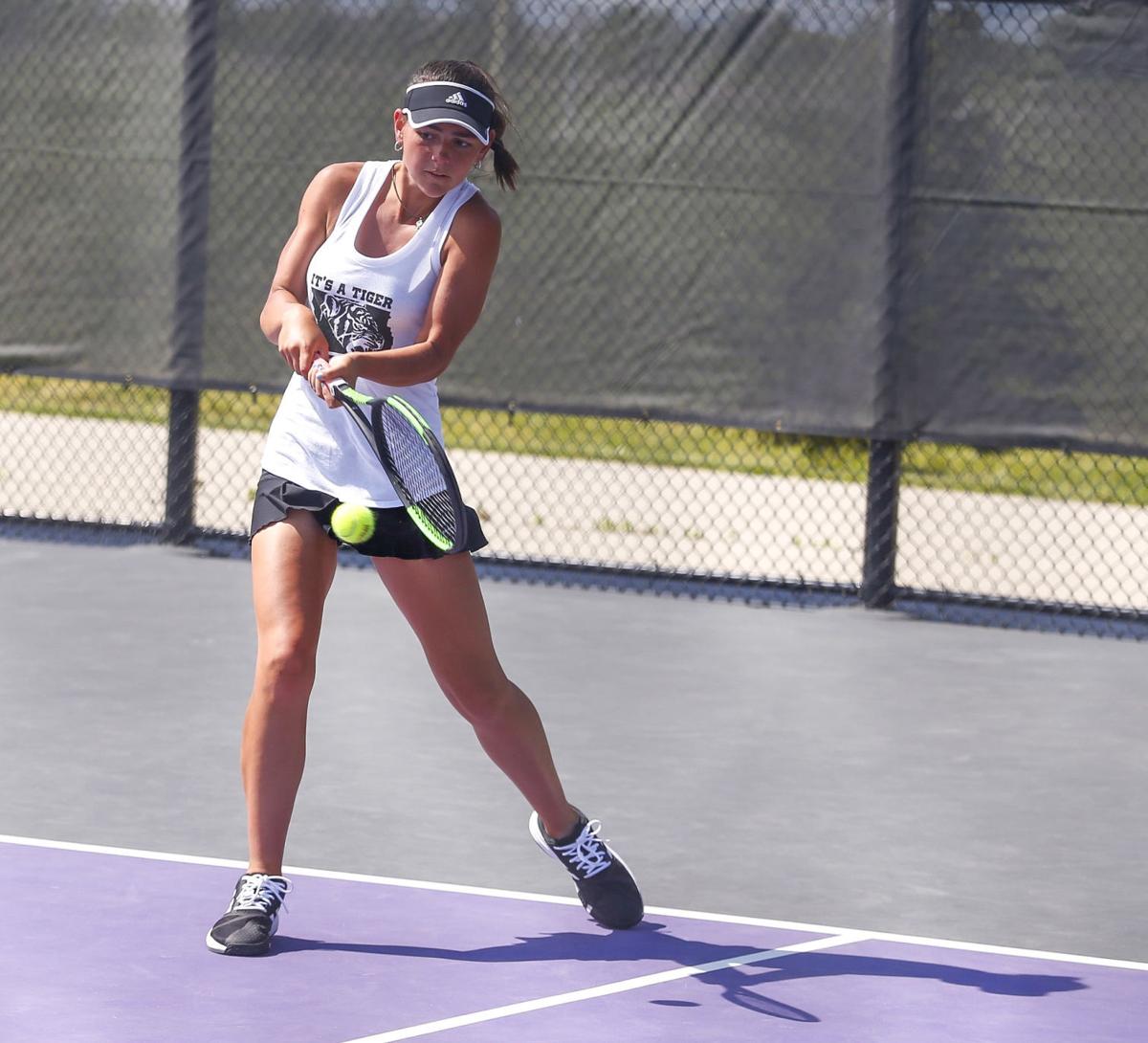 JOHNSTON – Cedar Falls and West Des Moines Dowling reached the finish line at the end of a marathon week of tennis late Saturday afternoon on the purple courts at Johnston High School.

In the end, Dowling was skilled enough to hold off Cedar Falls, 5-2, for the Class 2A state girls’ team championship. Plenty of youthful talent was on display as none of the 12 players in Saturday’s final were seniors and five were underclassmen.

“It’s exciting for the state of Iowa,” Dowling coach Drew Dunlay said. “This level of tennis is going to be really, really high for a long time. There’s a lot of other girls that are going to come into programs and do big things.”

Allison Szalay, the 2019 state doubles champion and 2A state singles champion on Thursday, joined consistent lefty Isa Valverde in producing three of Dowling’s five team points against Cedar Falls. They clinched the dual with a 6-2, 6-2 victory over Madison Sagers and Malina Amjadi at No. 2 doubles.

“Having Allison, a state doubles champ, playing at No. 2 doubles is huge,” Dunlay added. “She’s been there before and she knew what it was going to take to close that match. Her and Isa are both really steady players.”

When play concluded with Dowling’s fifth win, Cedar Falls’ Mira Keeran and Maya Mallavarapu were up a set over Ava Petersen and Mackenzie Klein in a No. 1 doubles rematch of the 2A state doubles final that the Tigers won Thursday. The Tigers’ No. 3 doubles team of Sriya Kalala and Elena Escalada were leading 5-2 in the opening set of their match when Dowling’s championship celebration began.

In singles, Sagers got Cedar Falls on the board first against Dowling with a 6-3, 6-0 win over Klein. Mallavarapu extended the dual to doubles by quickly recovering after dropping the second set of her match against Petersen to win convincingly in a match-tiebreak, 6-0, 5-7, 1-0 (10-1).

“I was getting a little tired and frustrated in the second set but I just refocused and thought about each point, point by point,” said Mallavarapu, who finished the day 3-0.

In what became a big swing match at No. 6 singles, Dowling took its 4-2 lead when sophomore Ellie Sackett overcame a 4-1 deficit in the second set to defeat Escalada, 7-5, 7-5. That competitive battle featured numerous lengthy rallies.

Dowling’s Szalay defeated Keeran, 6-3, 6-3, in a showdown featuring two of the state’s top players at No. 1 singles. Valverde was first off the court for Dowling with a win at No. 4 singles and Ella Spanovic held off a late rally from Cedar Falls freshman Kalala in the No. 5 match.

“I knew they were a tough team and we were going to have to bring our A game,” Cedar Falls head coach Tara Sagers said, addressing the challenge that Dowling provided. “I think we did in a lot of aspects, but we always have room for improvement.”

The growth Cedar Falls’ team has made throughout the season was on display in Saturday’s semifinal round with a convincing 5-2 win over an Iowa City West. The Trojans defeated the Tigers, 5-4, in their season-opener.

Cedar Falls picked up singles wins from Keeran, Mallavarapu, Sagers and Escalada against Iowa City West. Mallavarapu put away a volley at the net as her and Keeran clinched the meet with a convincing 6-2, 6-1 victory at No. 1 doubles.

“I’m really proud of everyone,” Mallavarapu said. “Ever since we lost to them (Iowa City West) at the beginning of the season, we’ve all just really put our hearts out on the court and done everything we can and the hard work paid off.”

The majority of Cedar Falls’ varsity lineup was newcomers to team tennis this spring.

“I’ve never experienced anything like it,” Mallavarapu said. “Tennis has been my main sport for a really long time and you’re kind of by yourself, but the team environment is super uplifting and positive.”

Keeran, a junior, could see the progress her younger teammates made throughout the past couple months.

“We’ve all gained confidence,” Keeran said. “Tara (Sagers) and (assistant coach) Sally (Quillin) instilled that in us. We were fighting. We fell a little short, but I’m happy with how my team performed and they continued to fight for every single point.

“Dowling was strong in singles and I think we were just tired. It’s been a long week. But we just have to keep working hard. We’ll want it even more and hopefully we can rematch them next year.”

The state runner-up trophy marked the first for a Cedar Falls girls’ tennis program that was coming off its previous best finish of fourth in 2019.

“What I said to them was, ‘You have nothing to be ashamed of. We’ve made school history today,’” Tara Sagers pointed out. “This is just going to make us hungrier and better for next year.

“I think a lot of them are going to make big jumps from here. They learned a different side of tennis and they’re such good friends and lift each other up. I think that’s great and I think it will carry into USTA (summer tournaments) and beyond.”

The team was selected by the three metro girls' soccer coaches.

Members of the Cedar Falls tennis team hoist their runner-up trophy at the conclusion of the Class 2A state team competition Saturday in Johnston.