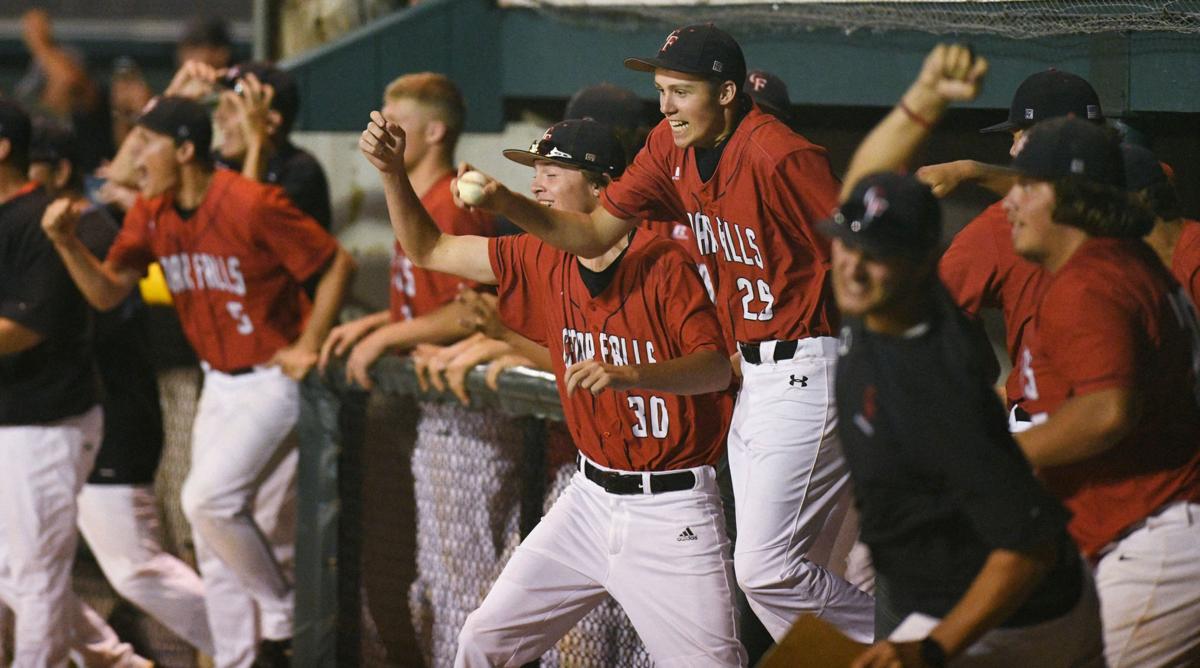 The Cedar Falls bench storms the field after their victory over Cedar Rapids Kennedy in a Class 4A baseball substate championship at Kennedy High School in Cedar Rapids on Wednesday. 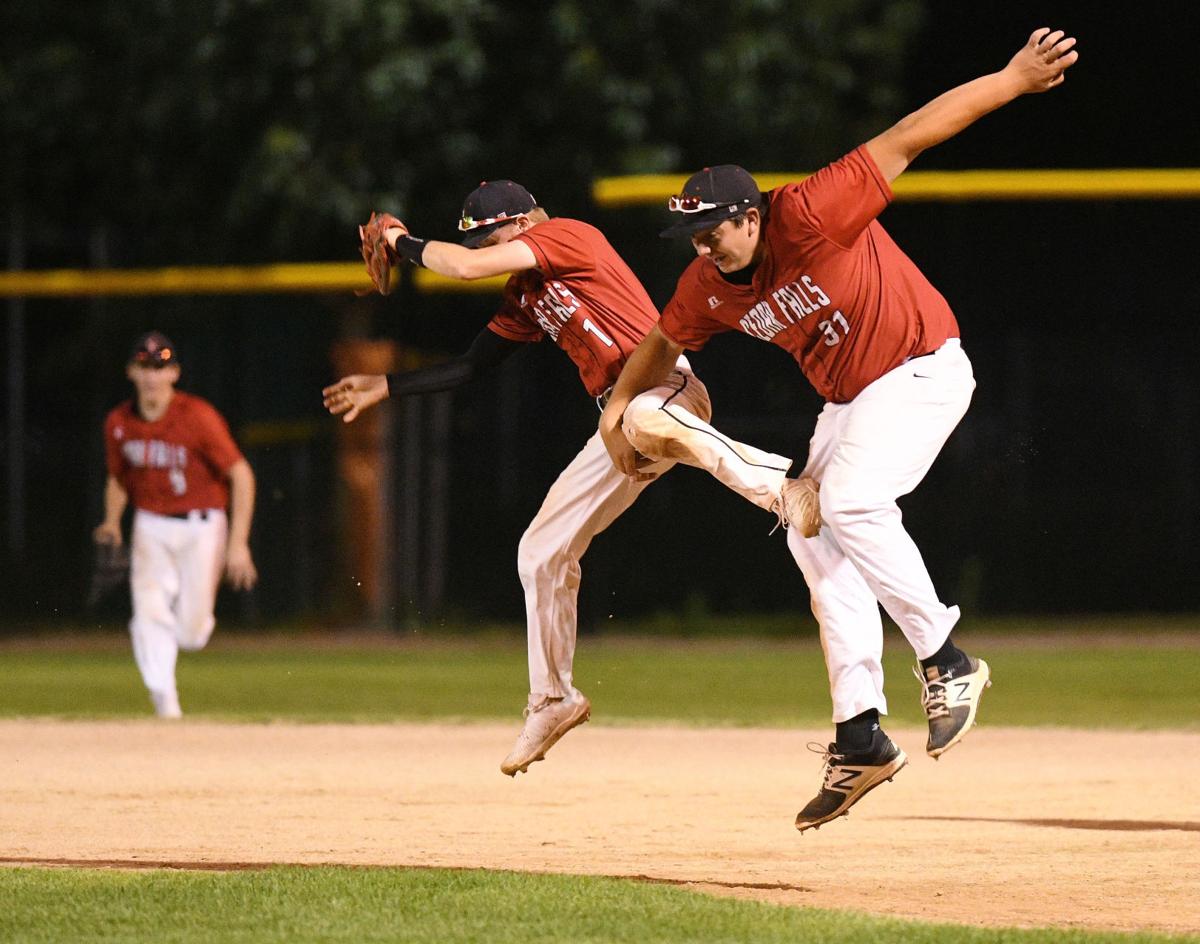 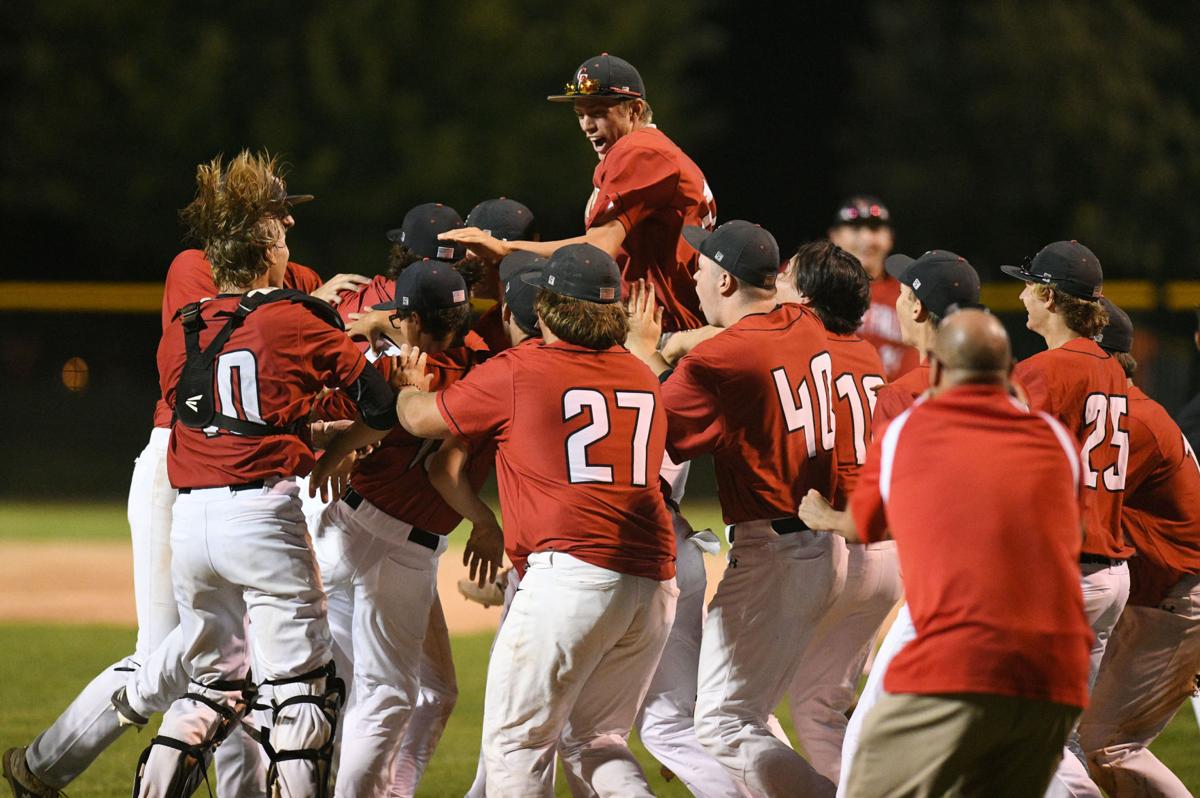 Cedar Falls celebrates their victory over Cedar Rapids Kennedy in a Class 4A baseball substate championship at Kennedy High School in Cedar Rapids on Wednesday. 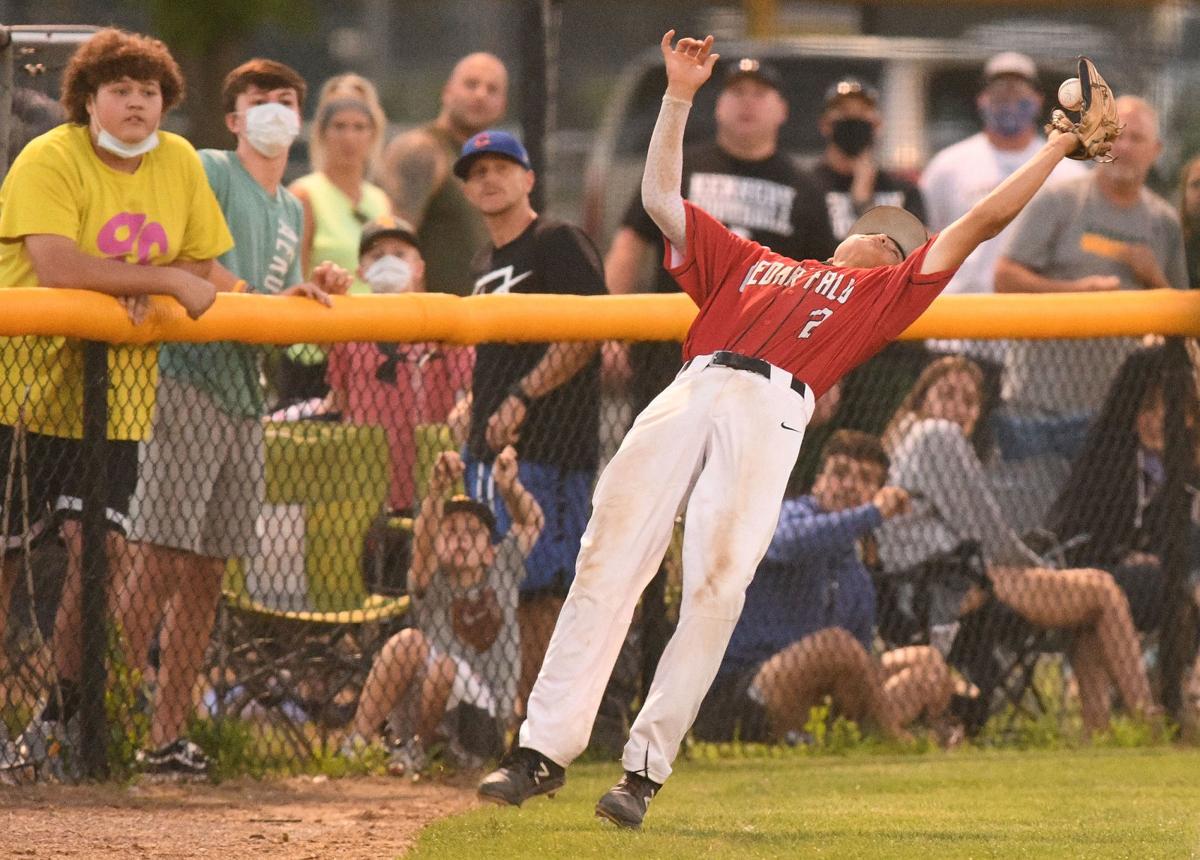 Cedar Falls' Jaden Kramer (12) attempts to catch a Cedar Rapids Kennedy pop up foul during a Class 4A baseball substate championship at Kennedy High School in Cedar Rapids on Wednesday. 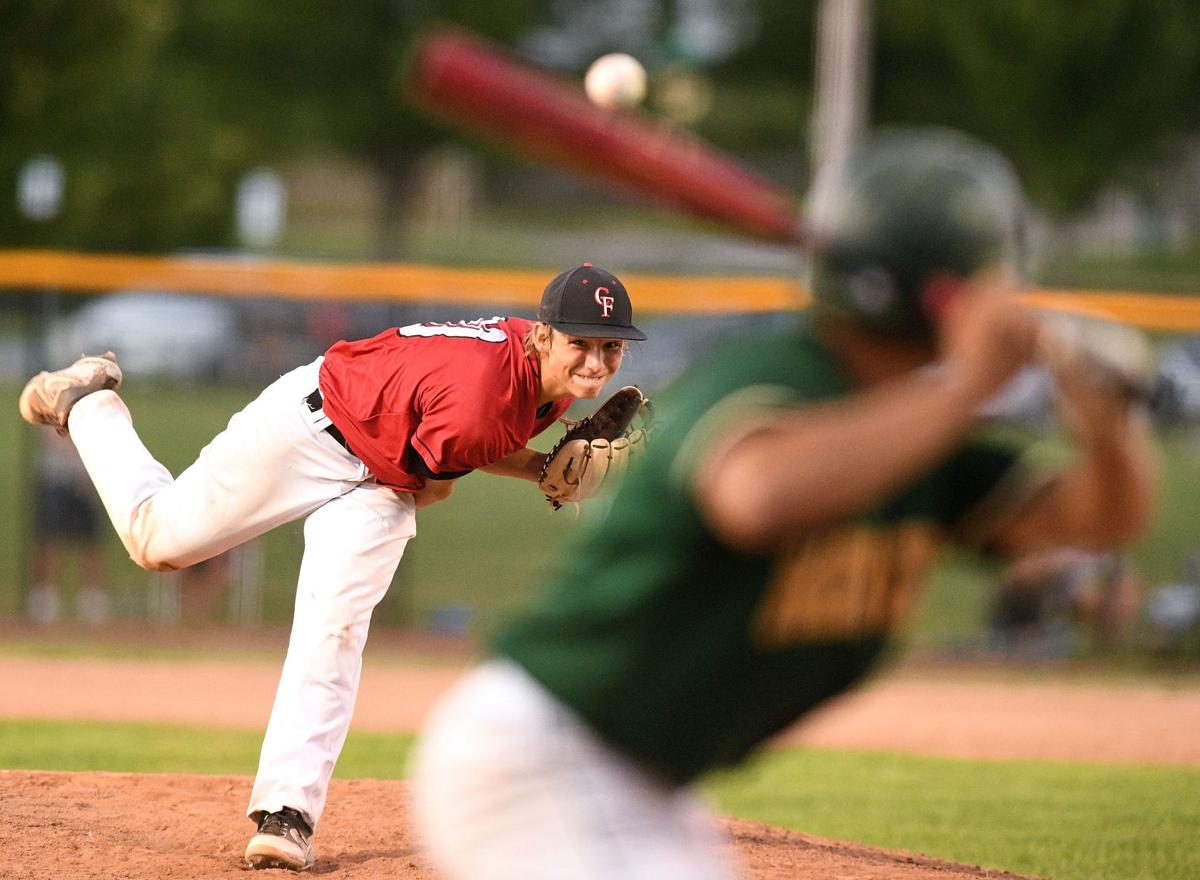 CEDAR RAPIDS — Why not us?

That’s the mantra Cedar Falls head baseball coach Brett Williams instilled in his youthful team following a near month-long delay due to COVID-19 cancellations. The Tigers’ first year head coach knew his roster, primarily consisting of sophomores and juniors, had put in the work to stay sharp.

This week, he found out they could handle the pressure with the lights turned on.

Cedar Falls jumped on Cedar Rapids Kennedy with five runs in the first inning and held on for a 7-4 Class 4A substate final victory Wednesday night. Eight games in this pandemic-delayed season with a midseason interruption were all the Tigers (7-1) needed to secure their first trip to state since 1989.

“I’m sure a lot of people didn’t have us penciled in as a state qualifier this year,” Williams said. “Every guy contributed. We’ve worked hard in practice and it’s awesome.

“They’re competitive. They don’t like losing. They fight. We’ve got some great leadership. Guys are doing things the right way and holding each other accountable. … We’re trying to build this culture of just being relevant. We want to play in games like this.”

For the second time this week, Cedar Falls turned to a closer to deliver a final out with the home team rallying in the seventh inning. Cedar Rapids Kennedy (14-6) had cut a seven-run deficit to three and loaded the bases with two outs.

When the pitch count rule forced Cedar Falls starting pitcher Gage Flanscha to depart, he handed off the baseball to closer Max Steinlage. Flanscha then delivered one final message of encouragement.

“This is what we’ve worked for and you just need to stay calm and do your thing.” he said.

Calm suits Steinlage just one. Two nights removed from a bases-loaded strikeout with the winning run on second, the tall lefty powered his fastball past Kennedy leadoff hitter Braden Dolphin on a full-count pitch for his second playoff save of the week.

“For 31 years we haven’t made it (to state), and now we’re there,” Steinlage said. “It feels outstanding to close out the most important game of the season.

“Quarantine didn’t stop us. We put in a lot of work over quarantine and we showed it here.”

The major blow in this game came early.

As Williams and his team looked over Kennedy’s pitching options prior to the game, they realized the Cougars’ No. 2 starter freshman Rowan Donels was likely to get the ball. The Tigers’ coach recalled his junior Zach Neese made a playoff start as a freshman two years ago.

“How did that feel?” Williams asked Neese.

“I was nervous,” Neese responded.

“We knew we needed to make (Donels) make pitches,” Williams said. “We did and we made some great swings. Combine a couple walks and a couple great hits and it’s 5-0 and we’re relaxed then.”

Flanscha, Cedar Falls’ most consistent starter in this shortened season, used that early cushion to his advantage. The Tigers didn’t surrender a run until Dylan Davis’ homer in the fourth inning. CF then limited damage to two and one runs in the fifth and sixth as Kennedy’s bats came to life.

After a 31-year state tournament drought, few would have imagined this would have become Cedar Falls’ breakthrough. Yet, these Tigers knew they had put in the work and they seized the opportunity.

“We worked all offseason for this,” said Flanscha, who spent the midseason quarantine working with elastic bands and long tossing to stay sharp. “That’s what I told myself coming into the game, ‘This is what we worked for.’ None of us really ever saw it, but we spoke it into existence. It was really just a manifestation and this whole program wanted it so bad all year. We just worked hard.”

The Cedar Falls bench storms the field after their victory over Cedar Rapids Kennedy in a Class 4A baseball substate championship at Kennedy High School in Cedar Rapids on Wednesday.

Cedar Falls celebrates their victory over Cedar Rapids Kennedy in a Class 4A baseball substate championship at Kennedy High School in Cedar Rapids on Wednesday.

Cedar Falls' Jaden Kramer (12) attempts to catch a Cedar Rapids Kennedy pop up foul during a Class 4A baseball substate championship at Kennedy High School in Cedar Rapids on Wednesday.