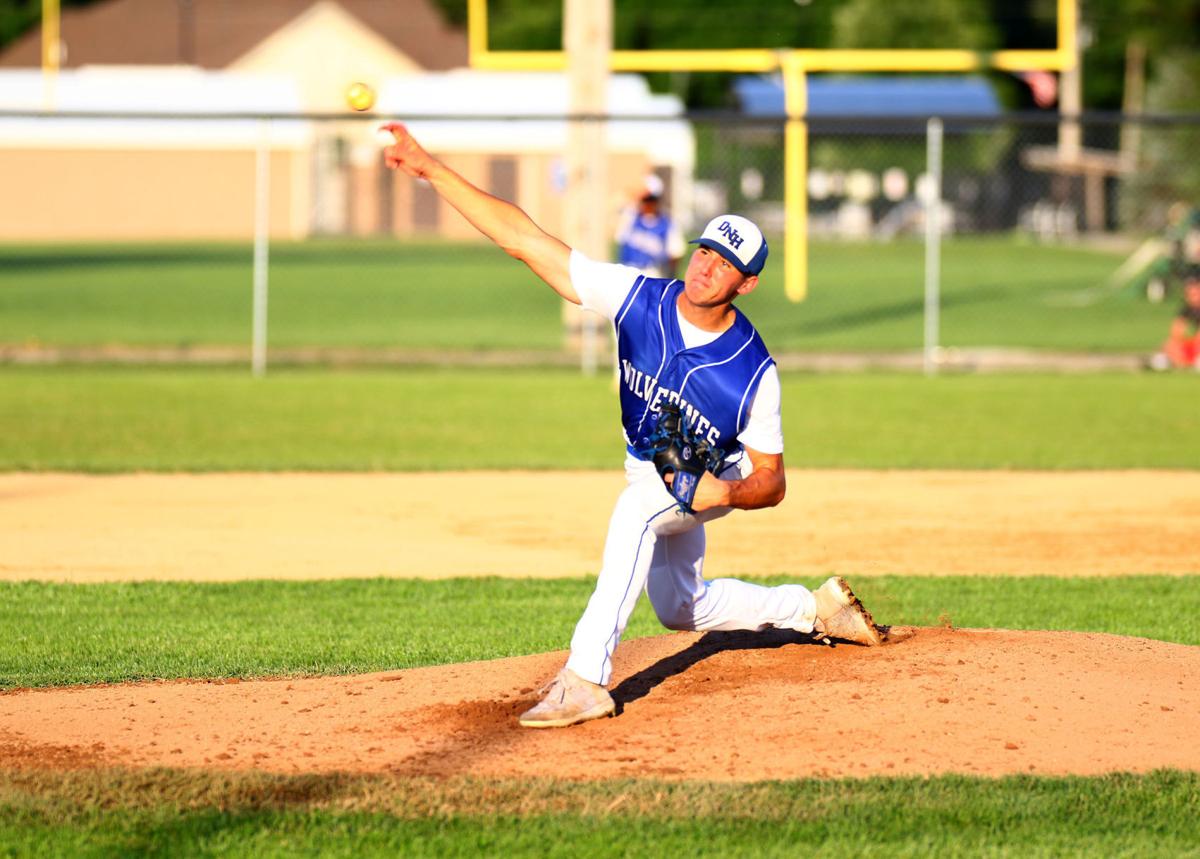 Dike-New Hartford senior pitcher Reece Beuter delivers a pitch against Pocahontas Area in the 2A substate final on Tuesday in Sheffield. 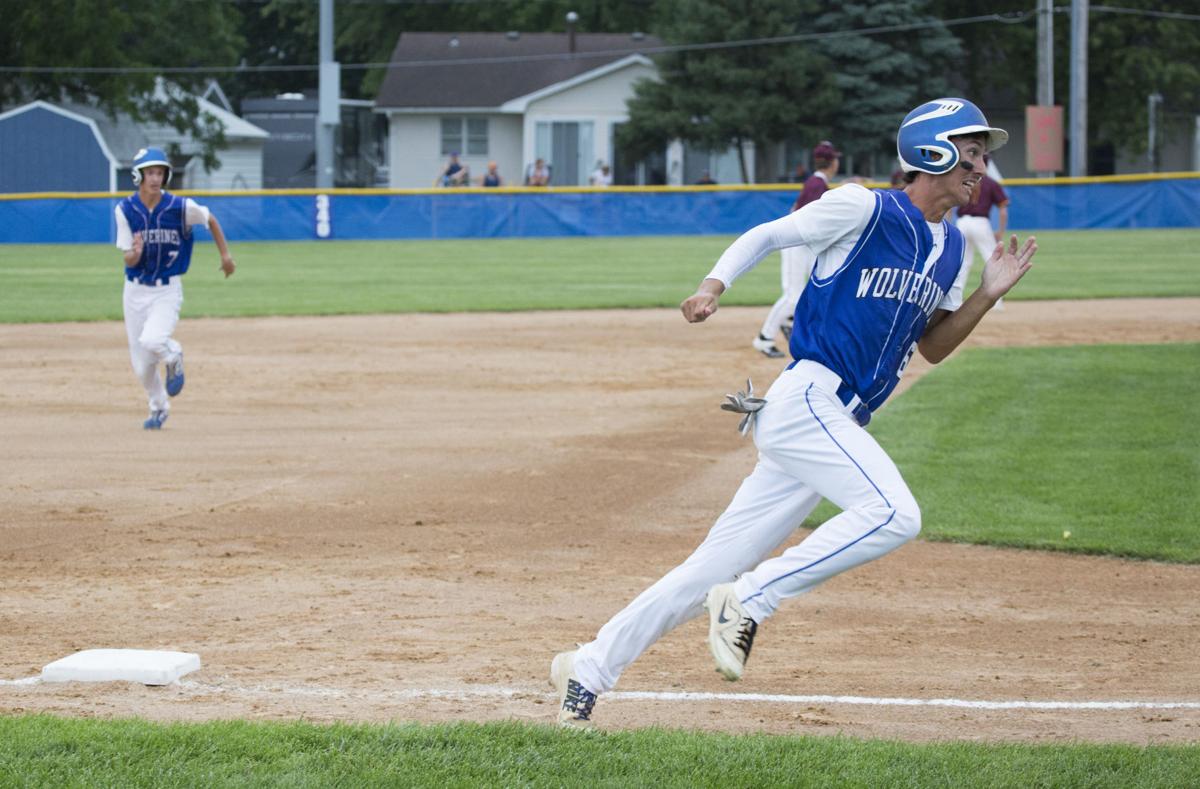 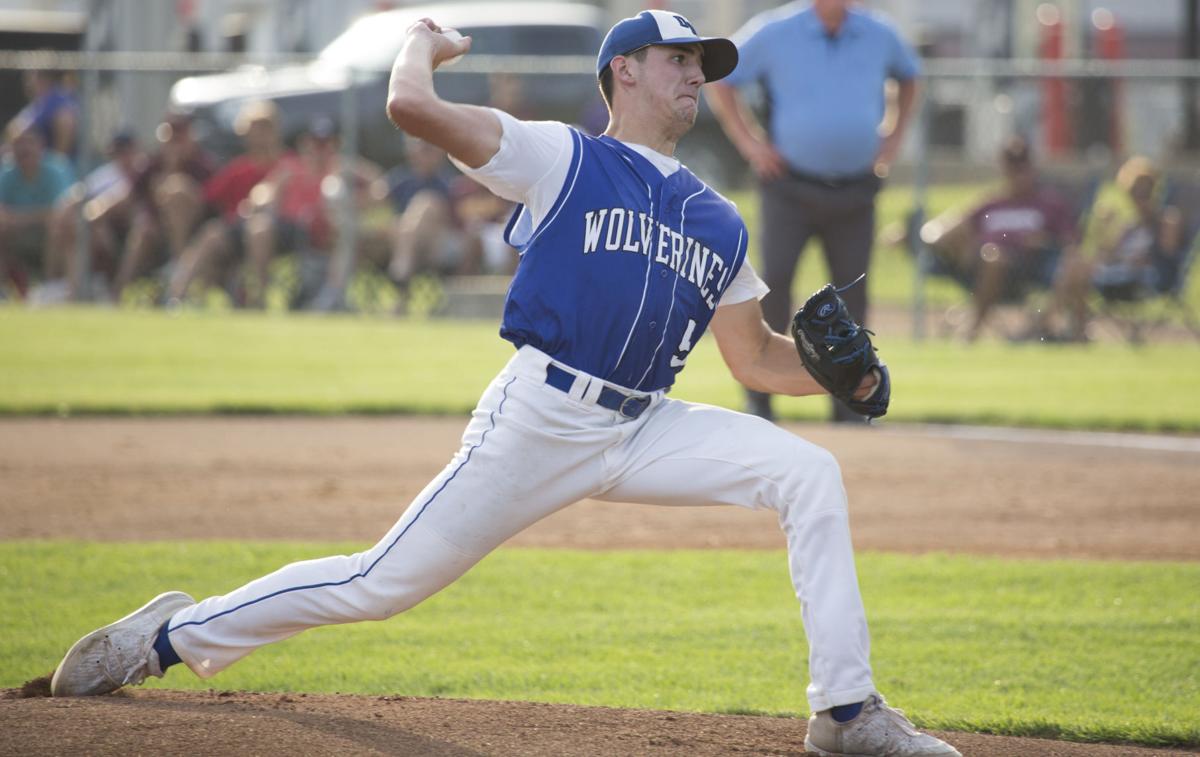 In nine seasons at the helm of the Wolverine baseball program, Leonard has won 20 or more games and six times DNH had reached the district finals. Not once in those six finals appearance did the Wolverines win, however.

Finally, a little more than a week ago, DNH solved its district final conundrum with a 9-1 win over Denver. The Wolverines rolled a couple days later to a 12-0 victory over Pocahontas Area in a 2A substate final to earn the program’s first ever trip to the state tournament.

“Finally, we got one and we decided we did not want to waste it so we won the next one, too.”

Leonard says it is a fitting end for a crazy year not only for the Wolverines, but all Iowa high school baseball and softball programs.

COVID-19 put a threat to the entire season, but the Iowa High School Athletic Association and Iowa Girls High School Athletic Union decided to allow a condensed season that began on June. 15. Seventeen days later, after winning nine of its first 10 games, Dike-New Hartford almost saw its baseball season end when a member of the coaching staff was exposed to the coronavirus.

“It was 36 hours of nail-biting,” Leonard said. “It was edge of your seat type of stuff and we got the negative … for our seniors who have done so much I just wanted them to go out on their own terms and not end by a pandemic or something like that. We have been able to do that so far.”

The Wolverines have five seniors – Reece Beuter, Drew Sonnenberg, Zach Starbuck, Parker Kieweit and Matt Reinicke. They have been part of a program that has went 92-25 since their freshmen season.

It is a team that relies on great pitching, led by the team’s ace Beuter, and a solid defense.

“We really hang our hat on our defense and pitching,” said Sonnenberg, the team’s starting shortstop.

The right-handed Beuter is 3-1 and has struck out 54 batters in 28 innings of work while allowing just 17 hits. He has a deep group behind him, too, with Reinecke, junior starting catcher Zak Wauters, Gus Varney and Sonnenberg.

“I want to pound the strike zone,” said Beuter who will play at Kirkwood Community College next season. “I’m confident in my stuff. I want to get ahead early and make the batter feel uncomfortable. That is really where I excel.”

“It’s not just his velocity,” Wauters said. “He’s got four pitches that he can get you out with and when he is locating watch out.”

As good as his pitching is Leonard feels the offense has really began to heat up, especially when Kiewiet gets on base.

Sonnenberg has a time-high 21 RBIs, and Beuter six extra base hits, including two home runs, while driving in 18.

It’s an entire team that is confident and playing loose. The experience of the seniors showed when the Wolverines were pushed to eight innings in their district opener by East Marshall, a 3-2 win.

Feeling its hiccup game was out of the way, DNH played that way by scoring eight times in the first inning of its district final against Denver. That solid play continued to the substate finals where the Wolverines scored nine times in the first three innings of a 12-0 win over Pocahontas Area.

“We were known as the team that couldn’t make it through districts,” senior center fielder Parker Kiewiet said. “When we got through that game all the weight was off our shoulders. We started playing really well and our bats got hot. Everything is rolling right now and it is a good time of the year to have that happen.”

Des Moines Christian (15-6) is in the field in back-to-back seasons and features a solid pitching staff led by Trey Castile, who has allowed just seven earned runs in 41 2/3 innings. He has struck out 50 and walked just five.

Kole Bradley and Zach Dueker have each won five games for the Lions.

Don Bosco breaks semifinal jinx, advance to the Class 1A state championship game with 9-1 win over Kingsley-Pierson at Principal Park.

DMC took its first lead over the Wolverines in the top of the 10th inning.

Dons won't find out about first-round state opponent until late Thursday morning as a postponement of one 1A substate game moved the seeding meeting back one day.

State baseball: Cedar Falls goes down swinging against No. 1 Johnston, 11-7

Cedar Falls rallied from down six to pull within a run, but Johnston's disciplined hitters never let up.

Don Bosco of Gilbertville reached its fourth Class 1A state semifinal game Friday with a 3-1 win over South Winneshiek of Calmar.

Dike-New Hartford senior pitcher Reece Beuter delivers a pitch against Pocahontas Area in the 2A substate final on Tuesday in Sheffield.