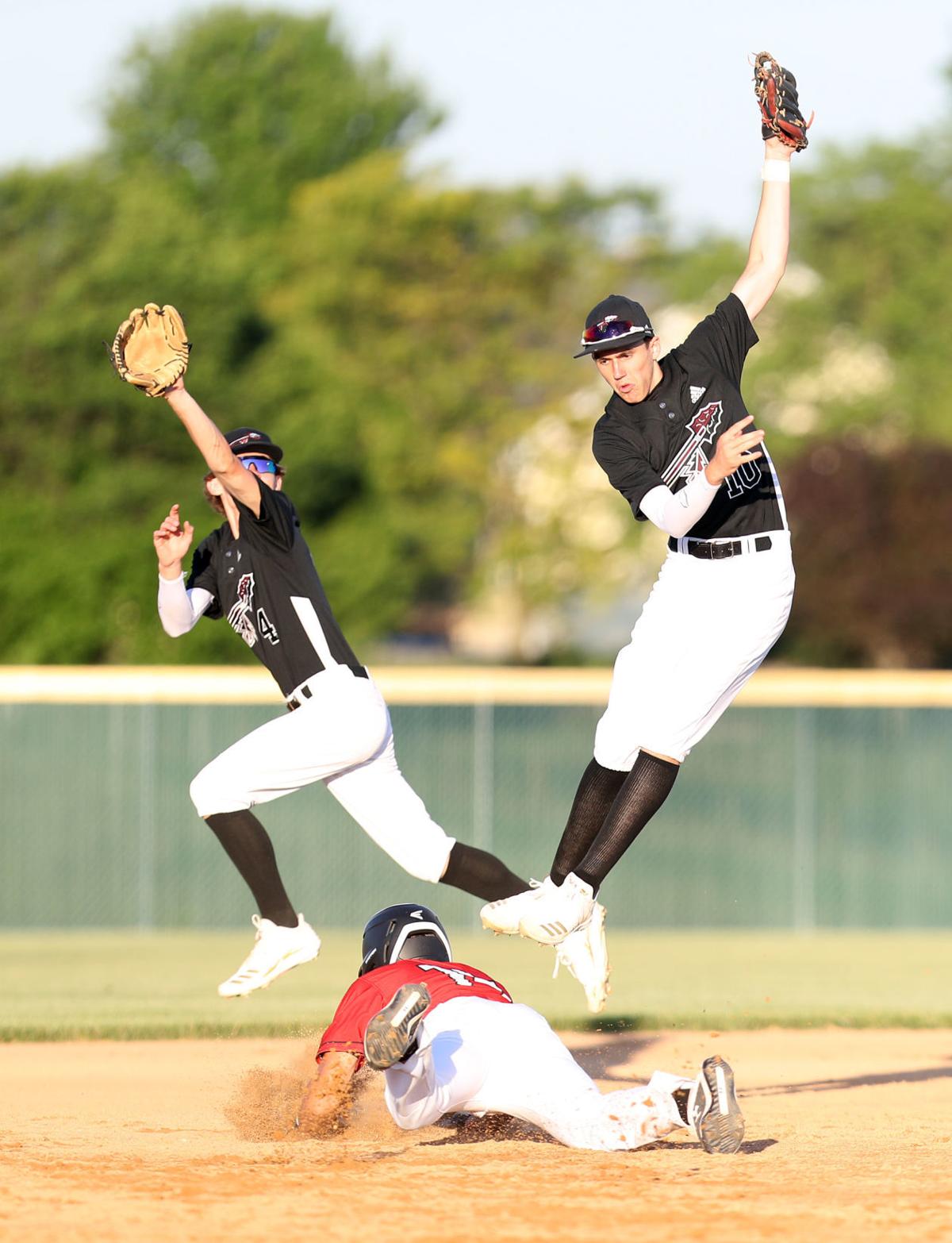 Cedar Falls' Max Steinlage dives back safe to second under the throw to Waterloo West's Sam Moore during game action Tuesday in Cedar Falls. The Tigers prevailed in extra innings, 8-7. 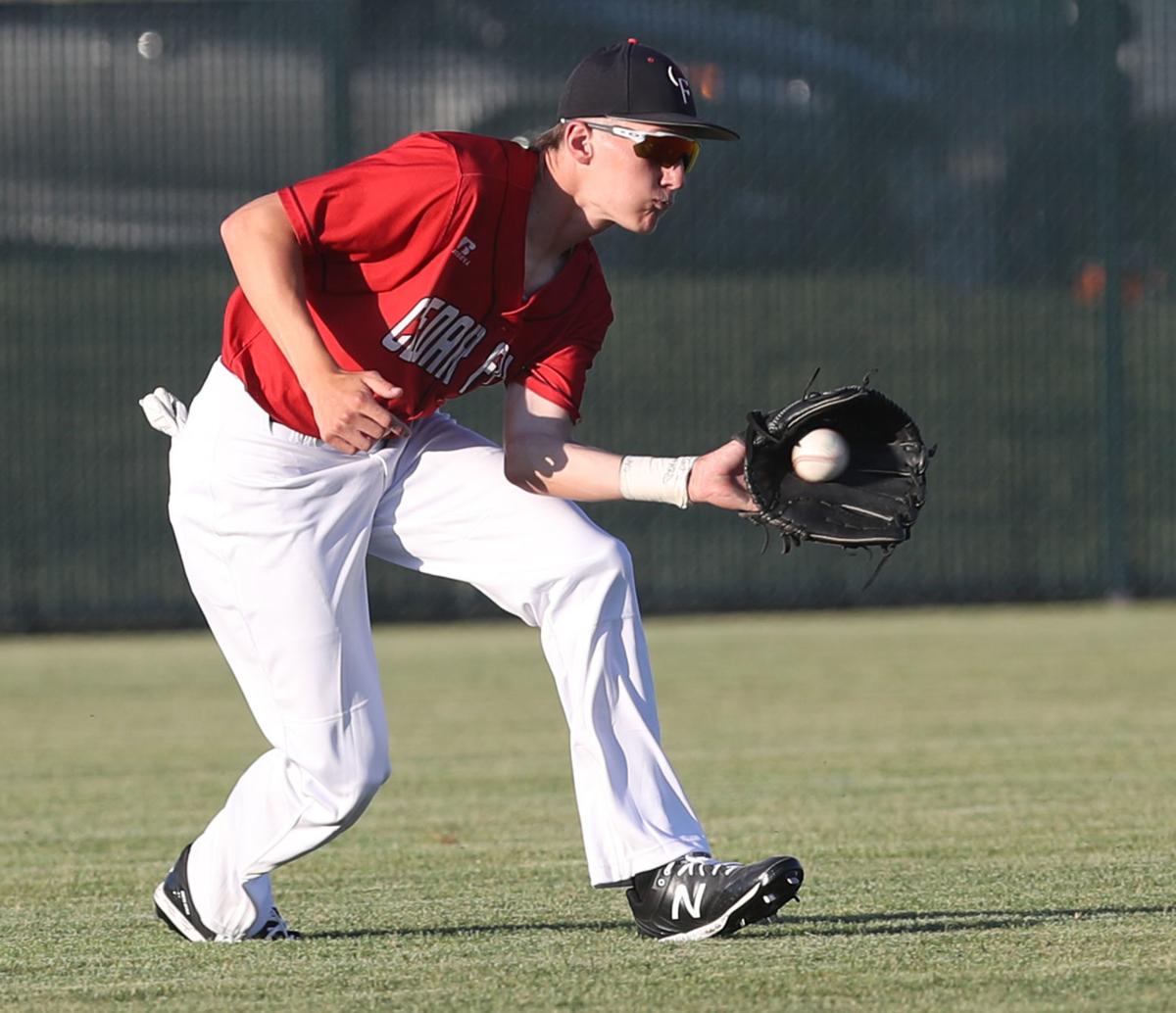 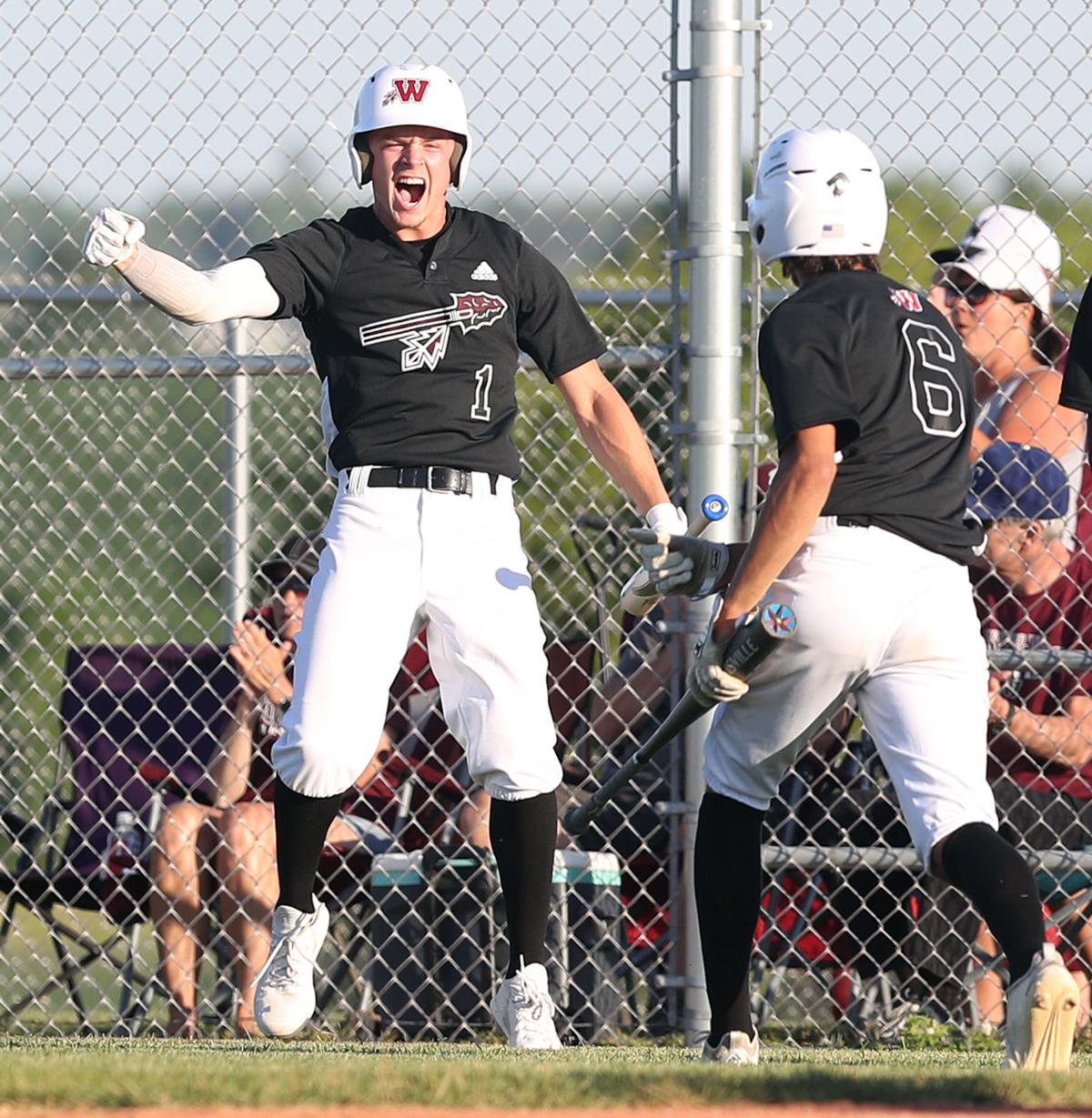 Eight weird innings concluded on a wild pitch in the bottom of the eighth inning as Cedar Falls secured an 8-7 victory in a 3-hour, 25-minute marathon.

Max Steinlage scored the winning run after previously advancing to third on a wild pitch.

“This was a really strange game,” said Steinlage. “There was so much that happened before the end it is just weird. I got to third, and when the pitch got by the catcher I couldn’t see it. I heard everyone yelling to go. I just ran hard toward home. I saw the catcher pick up the ball, but I was getting ready to slide and I knew I was going to make it. It was a weird ending to a strange game.”

Wahawks hurler Carter Schulte breezed through the first inning and carried a 1-0 edge into the second frame before the wheels fell off for West.

Schulte started the second stanza by surrendering three straight walks, but settled down and struck out the next two batters. Another trio of walks followed by a two-run double by Gage Flanscha gave the home Tigers a 5-1 lead. Another walk made the score 6-1.

“This was definitely a weird one to start the season,” said second year West coach Chad Crosby. “But you just can’t give up eight walks in an inning and expect good things.

“They scored six runs with just one hit. It is unfortunate for a kid like Carter who is a great kid, but he just didn’t have time to build his arm with the virus shutting things down. ... The kids never quit and battled back to take the lead and force extra innings and I am happy about that. We are gonna get much better, it is just going to take some time.”

The Wahawks rallied and tied the game on a two-out solo home run by Clayton Rottinghaus in the top of the seventh. West then pulled in front, 7-6, on Sam Moore’s RBI single in the top half of the eighth.

Cedar Falls responded in its half of the eighth with a leadoff single by Gage Flanscha and a one-out single by Steinlage that plated the runner after an overthrow at third.

The first wild pitch advanced Steinlage to third, followed by the errant pitch to score the winner.

“Baseball can be a very strange game and we saw that here tonight,” said first year Cedar Falls coach Brett Williams. “We lost a lot of guys from last year and had to put some really young players in some tough spots tonight. At times we didn’t get the breaks we were hoping for and it almost cost us.”

The Tigers had two dropped balls in the fifth inning that prolonged a four-run frame. Then, CF had a chance to win the game in the seventh when Isaac Bauer drove a shot into the gap, but Caiden Barnett slipped and went down as he rounded third and had to get back to the bag.

“I wouldn’t say we were snake bit,” said Williams. “But some strange things happened and I was just proud of the guys over coming those things and never giving up. What a night.”

Goalie will compete for a place on the U.S. National Junior Team.

Cedar Falls' Max Steinlage dives back safe to second under the throw to Waterloo West's Sam Moore during game action Tuesday in Cedar Falls. The Tigers prevailed in extra innings, 8-7.